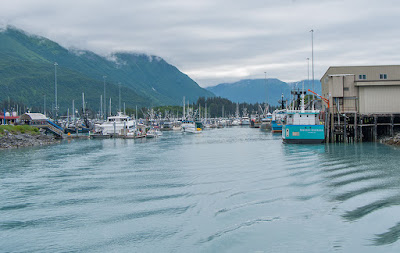 The sky was overcast, but the water was quite calm.

The boat had both indoor and outdoor areas and proved to be quite comfortable, which was good because it was an eight hour cruise!

Chris, our captain, gave a running narrative that was very informative and enjoyable. It didn't sound "canned," nor did he repeat himself very often, although I'm sure he has said the same things many, many times. 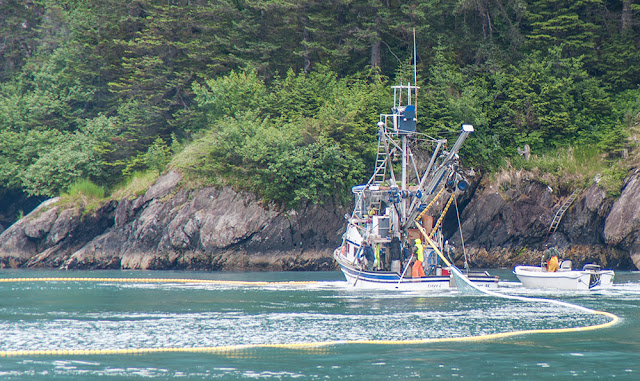 As we left Valdez we passed several boats purse-seining for salmon. Before commercial fishing is allowed, a certain amount of salmon must be caught for "cost recovery" for the hatcheries. They do this with nets that they set in a circle and then draw up like a bag. When the small boats are full they go over to a larger "tender" boat, and deposit their fish for credit. 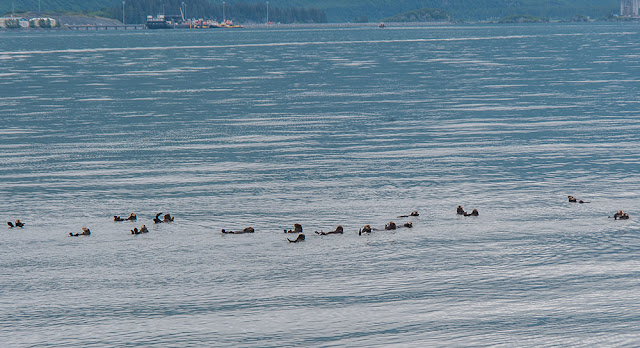 Not far from the fishing we passed a couple of "rafts" of sea otters. We did get closer than the above image suggests, but none of our pictures were in focus. We also saw numerous single otters just floating in the open water. 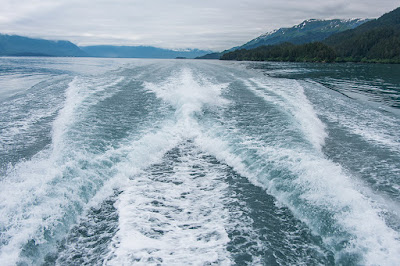 Once past the Narrows, we put on some speed and headed out into the Valdez Arm.

The shoreline scenery was  amazing. 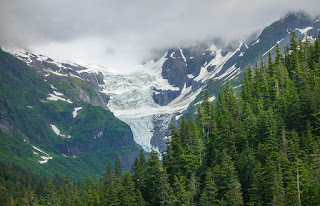 There are 616 officially named Glaciers in Alaska, but an estimated 100,000 or more that do not have names. It seemed to me every high mountain pass was filled with snow and ice (in July!).


The next creatures we spotted were a pod of Dall's Porpoises. They raced alongside the boats like their dolphin cousins. They can swim at speeds up to 35 miles per hour! 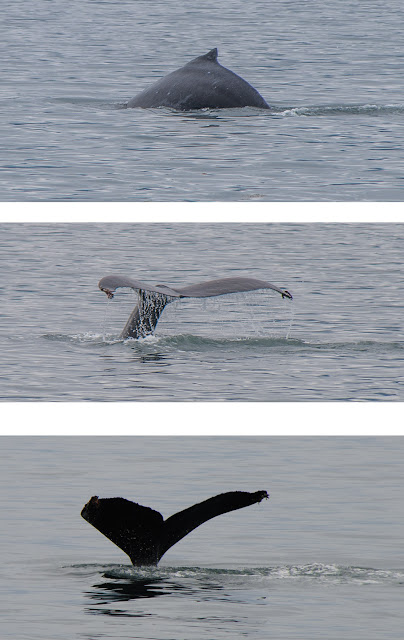 The captain keep a sharp eye out for wildlife.

Whenever he spotted something he slowed down and got as close as he could without disturbing the creature.

The three pictures to left are all of the same humpback whale. We watched him for several diving cycles. 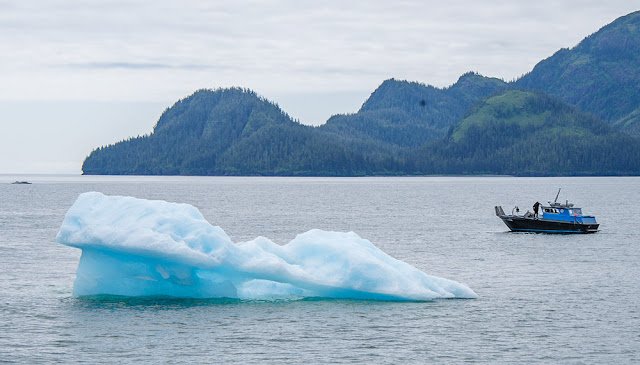 We passed the inlet that led to the Columbia Glacier, but did not go in. In addition to a lot of smaller ice, we saw this large blue floater. The fishing boat was not far behind it, giving scale to the image.

Here is a different view. I doubt it qualifies as an iceberg. 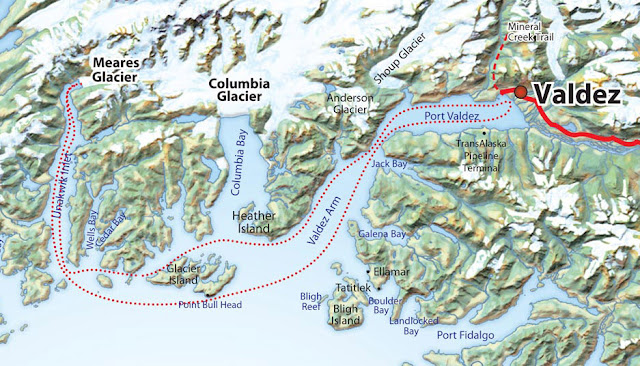 Our cruise destination was the Meares Glacier.

But before we arrived we were joined by this pair of Orcas.

Not long after, the rest of the pod was spotted a little farther away. Part of that group was a female following two younger orca. The captain turned the boat toward them and the female breached. We didn't know if it was a warning to the boat, or a signal to them to get moving, but we turned away and they swam on. 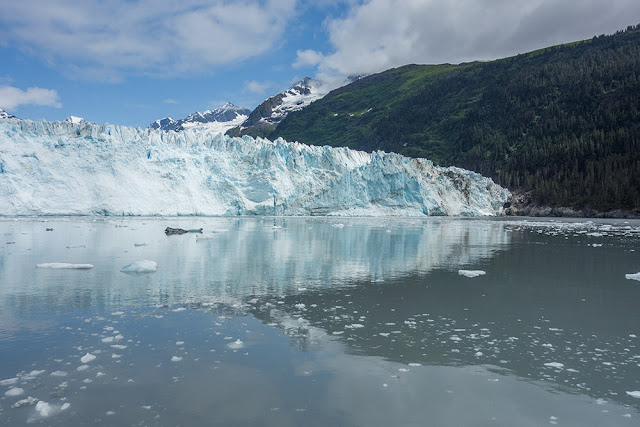 By the time we reached the Meares, the gloom had cleared and the sky was blue. The waters were still enough to show some great refections. 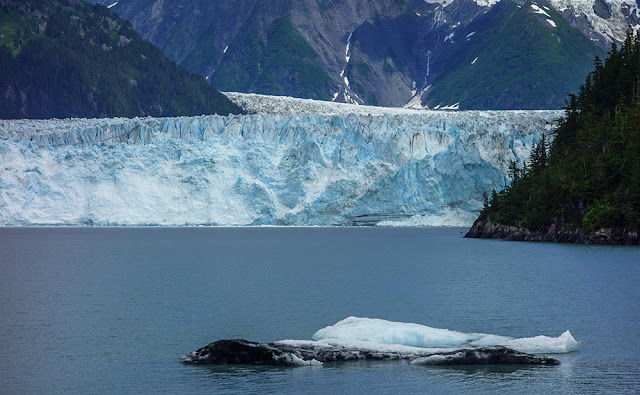 The Meares Glacier is hundreds of feet high and about one mile wide where it comes into the inlet and "calves" ice. 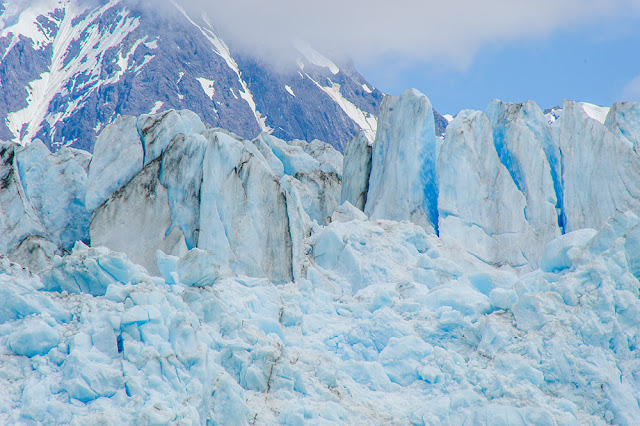 This is a close-up of the top layer of ice on the face. Each spire is huge.

The next two pictures were taken as a large piece of ice fell off the face. The top of the fall is marked with a white > on the first picture: 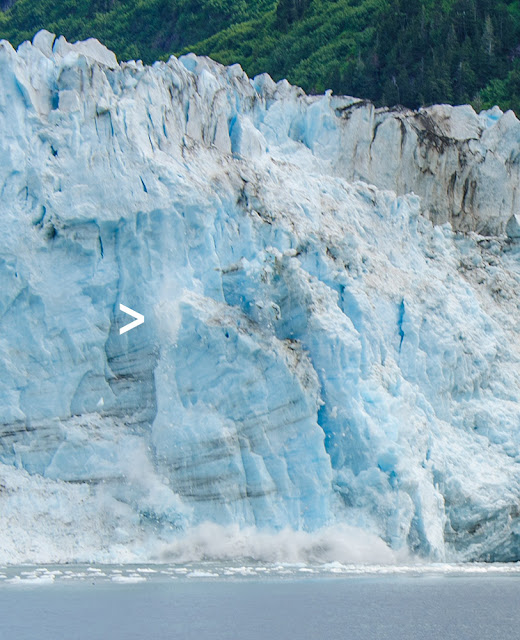 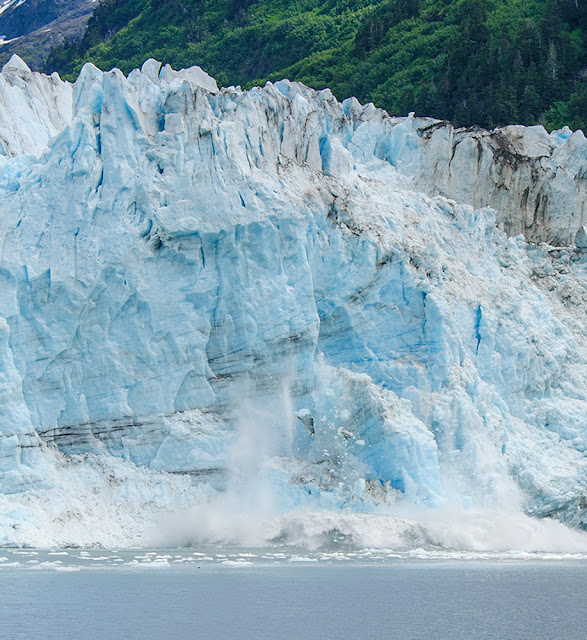 We stayed at the glacier for a nice long time. Sometimes on tours they rush from one thing to another, but I think everyone was satisfied.

Lunch and later a soup snack was included. It wasn't great, but it did fill our tummies.

As we cruised back toward Valdez we enjoyed more interesting scenery.

It's amazing how plants can take over even a small island. This was along Point Bullhead where we saw many birds including puffins. 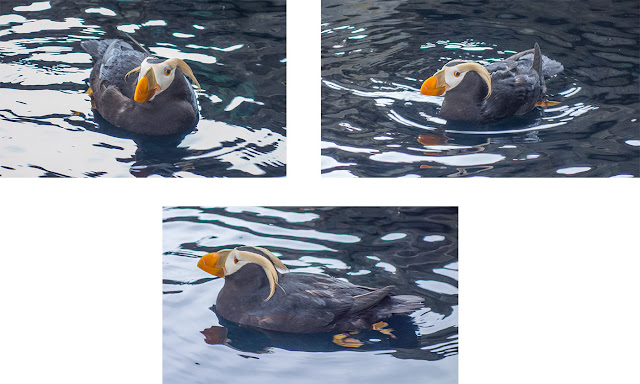 OK I cheated. We did see these puffins, and these are my pictures, but these birds were at the Seward Aquarium. The puffin pictures from our boat ride were not very clear.

The last critters we saw were: 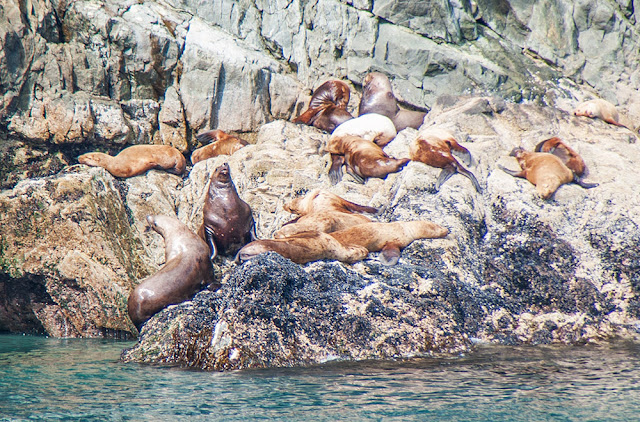 Steller Sea Lions, also near Point Bullhead. These are all immature. The breeding grounds are further out to sea on a different island.

By the time we were almost back, everyone in our family was a bit tired from all the fresh air. 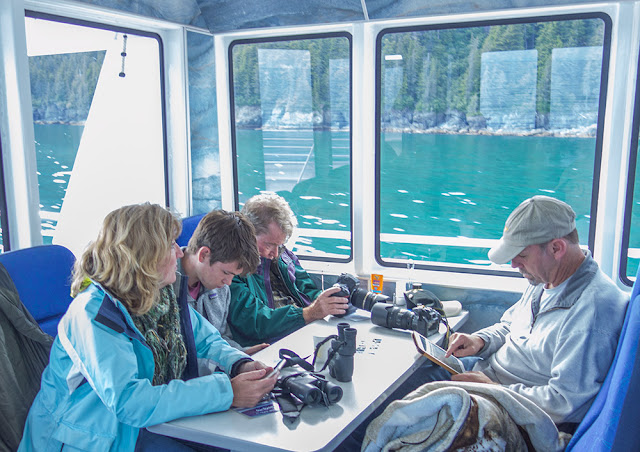 Dylan found a place downstairs to take a nap, and the rest were suffering from electronic deprivation. Craig is reviewing the pictures he had taken.

All in all it was a wonderful day, and I will be giving Stan Stephens a nice review.