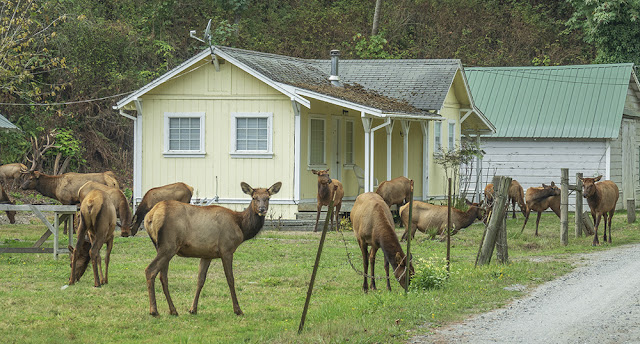 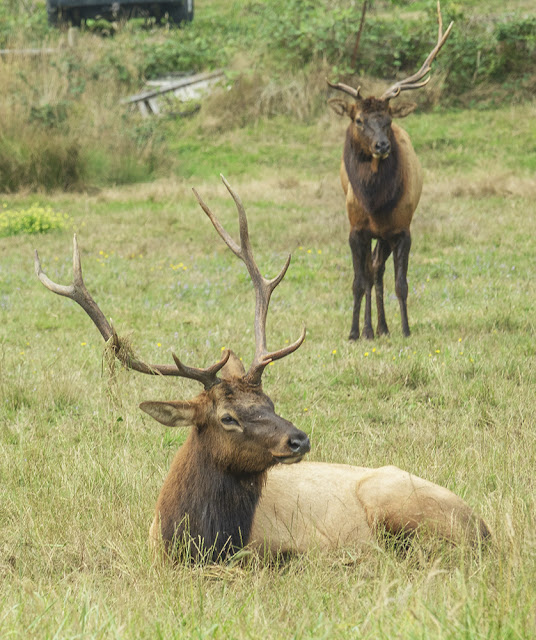 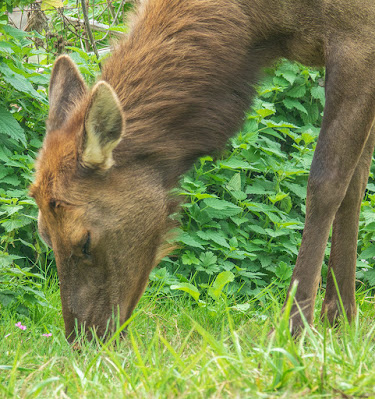 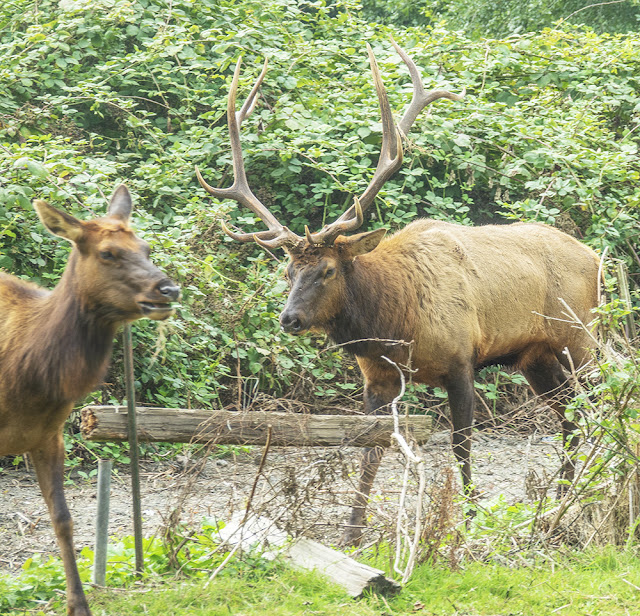 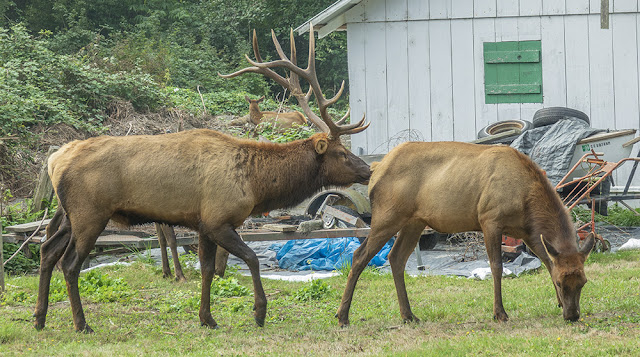 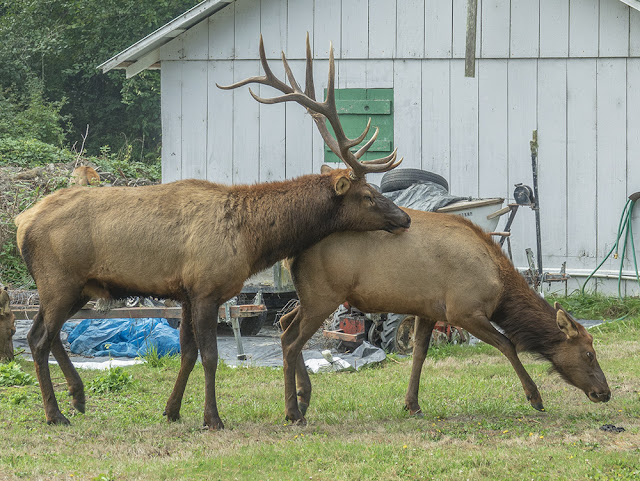 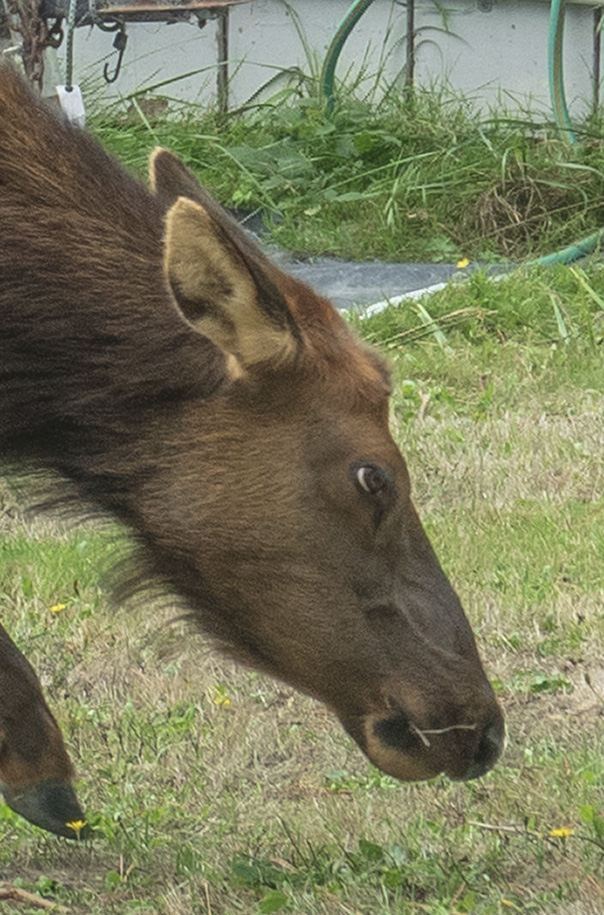 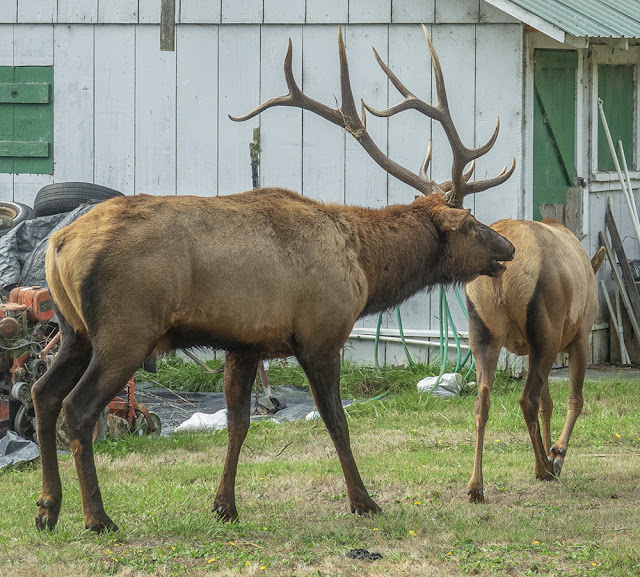 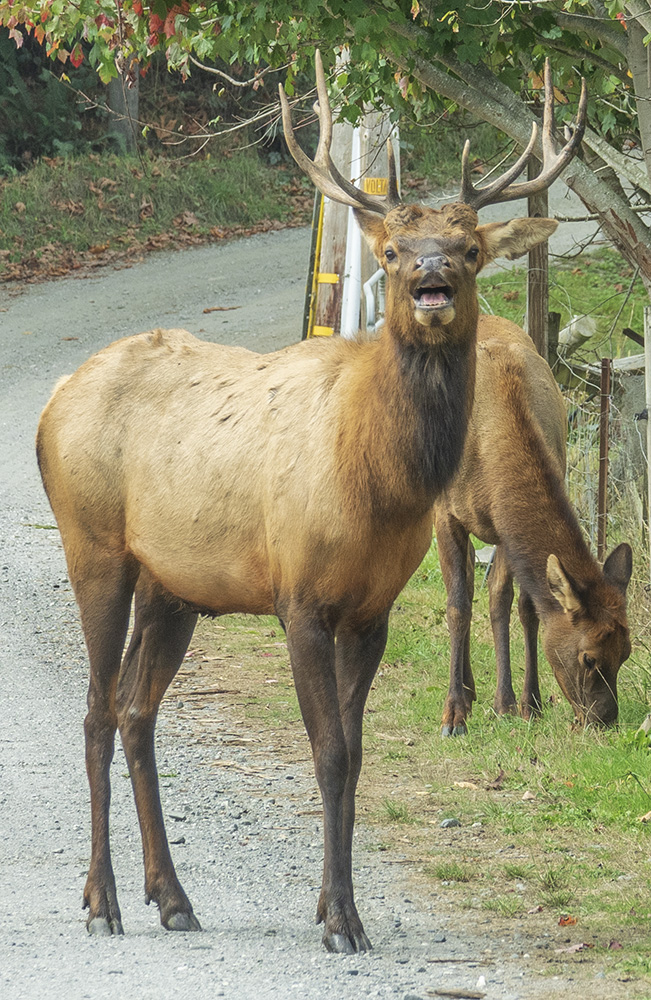 A Return to Fern Canyon

We visited the Redwood National Park area in July of 2012, on one of our earliest RV trips with the Alfa. I remembered one of the places we saw was called Fern Canyon and I knew I wanted to visit it again. 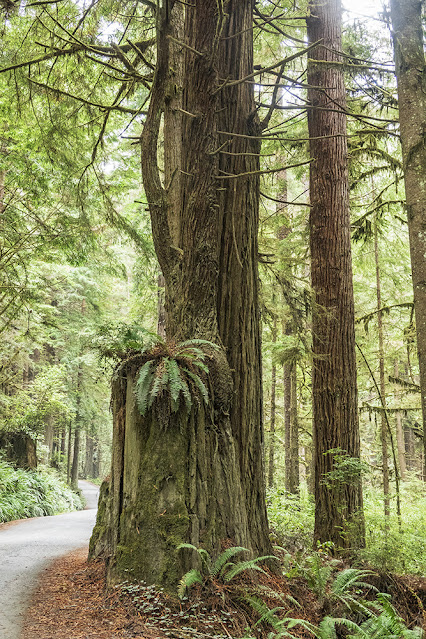 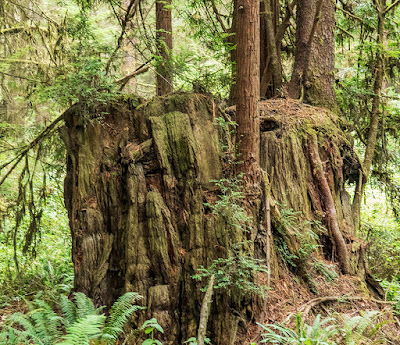 The drive in to the Canyon parking area is a rather rough eight mile road through a forest that had been logged of its old growth redwoods many years ago.

The new growth trees, around the big stumps,  are very tall, but not very wide. 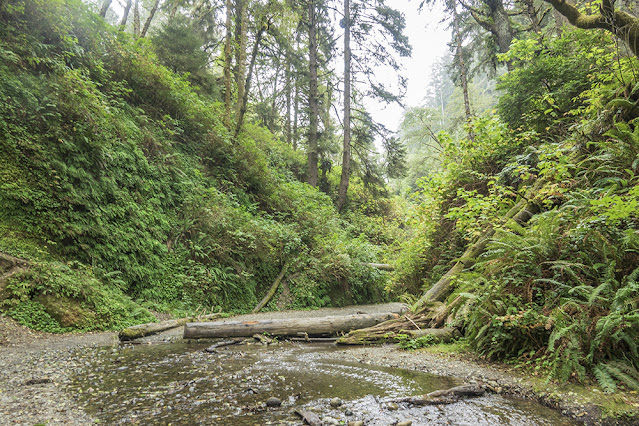 Fern Canyon is a stream bed that carved its way through the sandstone creating high walls that are covered with many kinds of ferns. I once read they filmed part of Jurassic Park (the movie) here, and it really did feel like it could be on an unpopulated island. 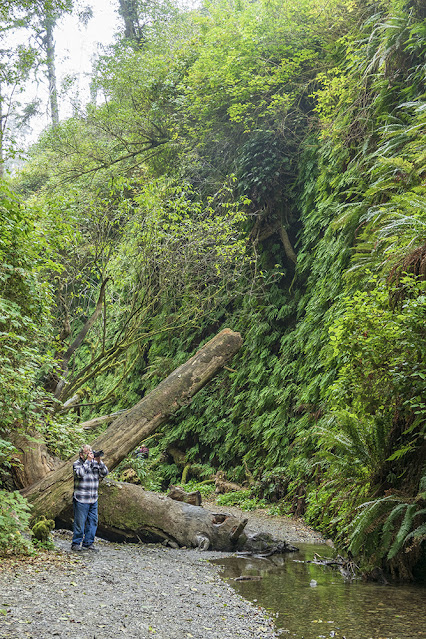 Craig taking a picture shows the height of the walls.

In the picture below I am wearing a mask because there were other people around, and even though we were outdoors and we tried to keep our distance, we masked up for COVID protection.  Most other hikers do too, but there are always some who do not. 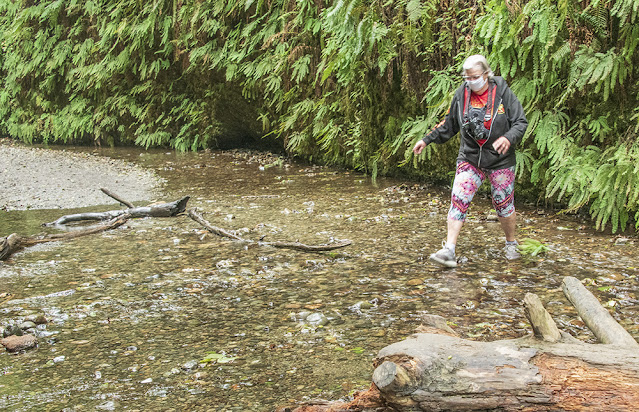 Although it is in a park, and a very popular place to visit, the stream bed trail is not "developed". There is no "trail", and you have to cross the stream many times to go up the canyon. There are some logs that a well balanced hiker can traverse, but once you have gotten your feet wet, it is easier to just splash across a shallow place. 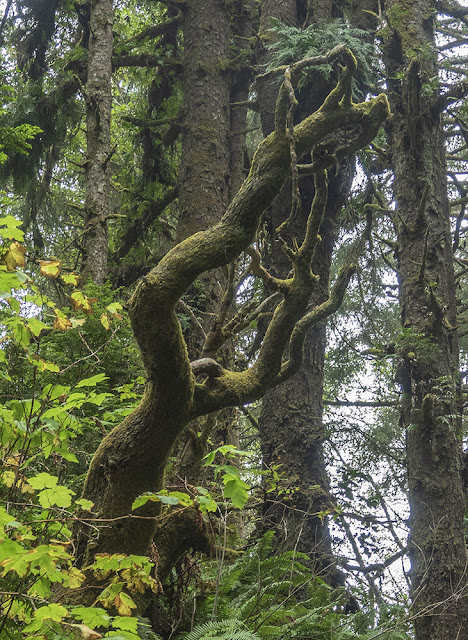 By now, you know I love to take pictures of weird trees.

This one was on the top edge of the canyon wall. 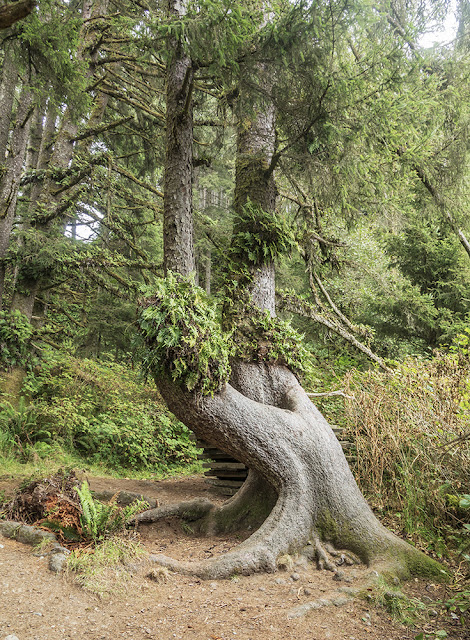 We also noticed this funny tree on our walk back to the Jeep. I don't know what kind of tree it was, but its double trunk and graceful curves with ferns growing on its sides made it look like it had been caught doing a fancy dance.

The coastal areas of Washington, Oregon, and Northern California are among my favorite places to visit. Life seems closer to nature here. So many great short hikes to take.

We will be back!

We only have a few more days to immerse ourselves in the lush forests of the Northwest before returning to the high desert of Aguanga for the winter months.

Saturday was a beautiful day to visit the redwoods. Although the fog was heavy at the beaches, the sun was shining and the temperature was near 70° at the Lady Bird Redwood Grove, located in the Redwood National Park, in Northern California. 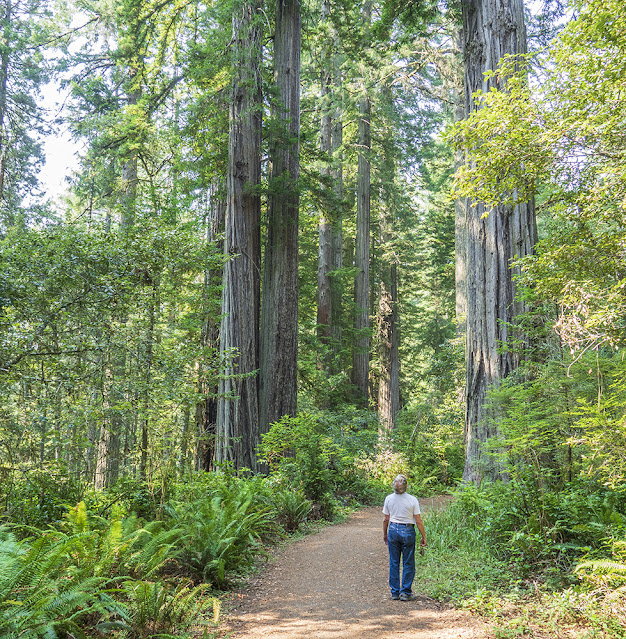 You could get a stiff neck here very easily. It's a good thing the trail is wide and free of rocks and roots. 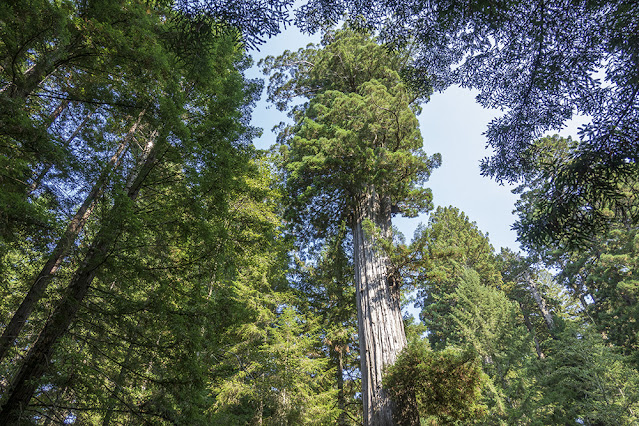 The tops of these giants looked very healthy from below. 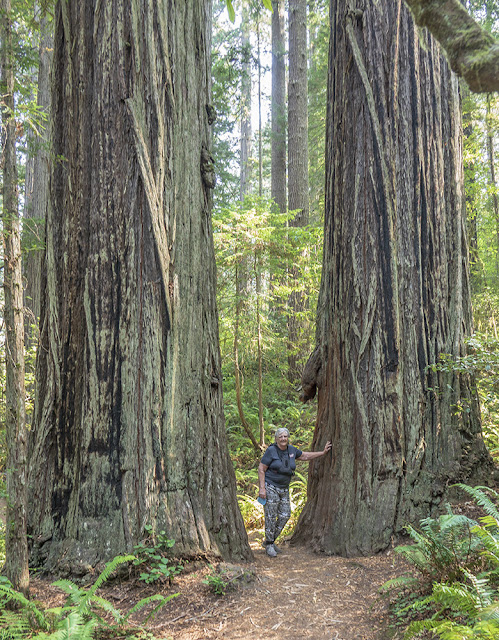 You can't help but pose for the classic standing next to the big tree picture . 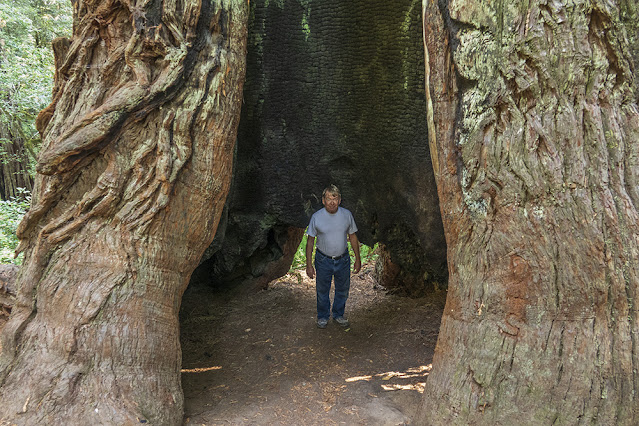 Or, standing inside the burned out base of a living Redwood.

Many of the trees showed burn scares from past wildfires. Because of their size, moisture content, and thick bark, a redwood can survive a wildfire. The picture above is of only the middle portion of the trunk of a fire-damaged tree. There was just as much trunk below this section, and where the split ended there was significant healthy, living growth going up. 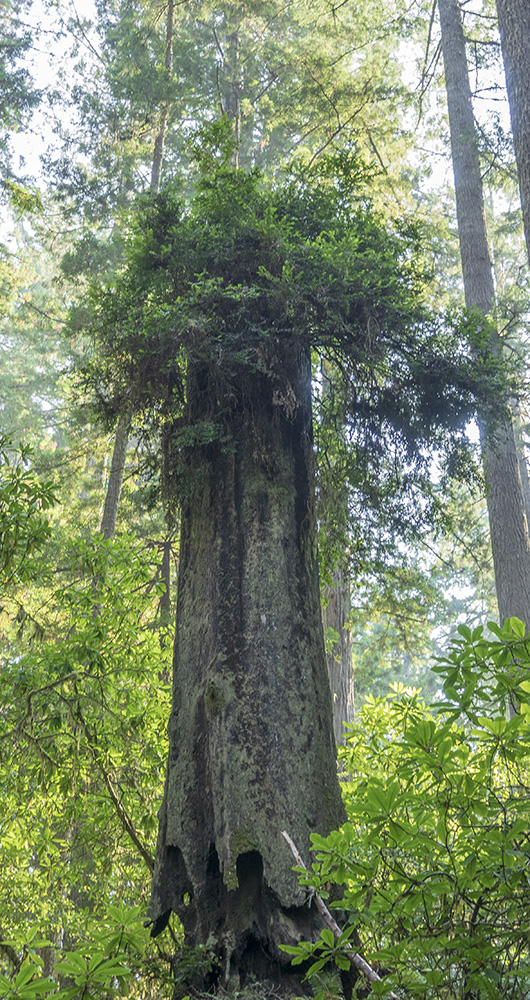 Most of the old growth trees are alive and well. As the natural cycle goes, some have fallen and are decaying to nourish the forest floor. I found this dead trunk interesting because although seemingly dead, broken off, and deteriorating on the bottom, it supported a healthy growth of new plants and/or branches on its top. 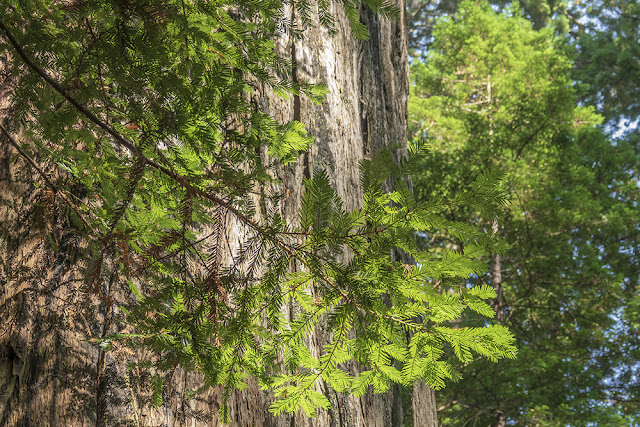 Experiencing the magnitude of the forest as a whole is memorable and will sustain my heart in dark future times. I also tried to stop for a moment to savor the perfection of the symmetry and fresh greenness of the needles in the dappled sunshine.

It is hard to take a picture of an entire redwood while walking among them. This was taken in the parking lot where I could get far enough away to capture the full height.

Although the trees in this grove are impressive, they are not the largest, or the oldest. We will be seeing more in the next few days. 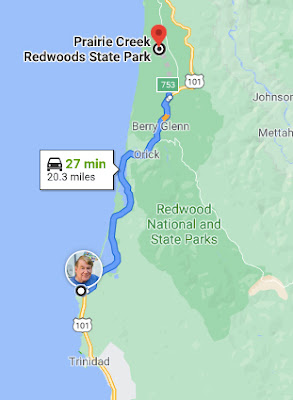 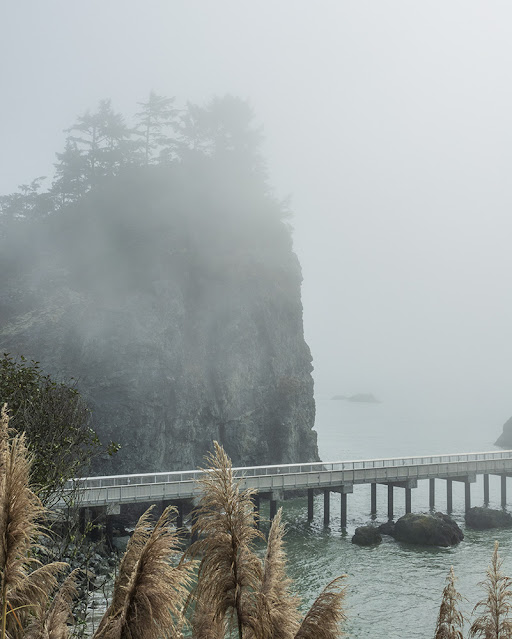 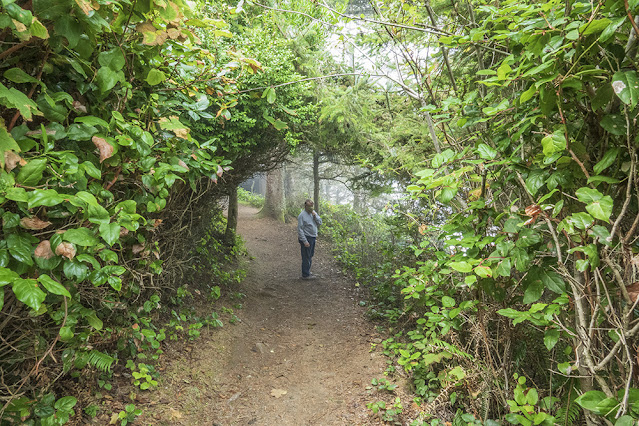 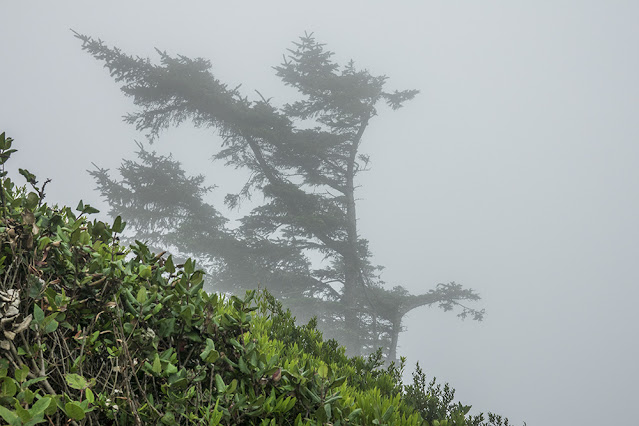 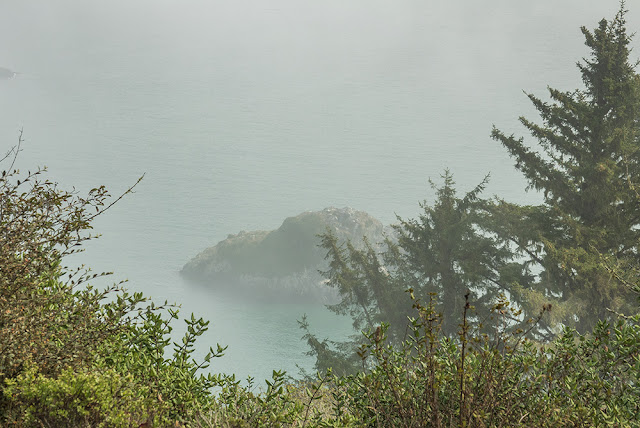 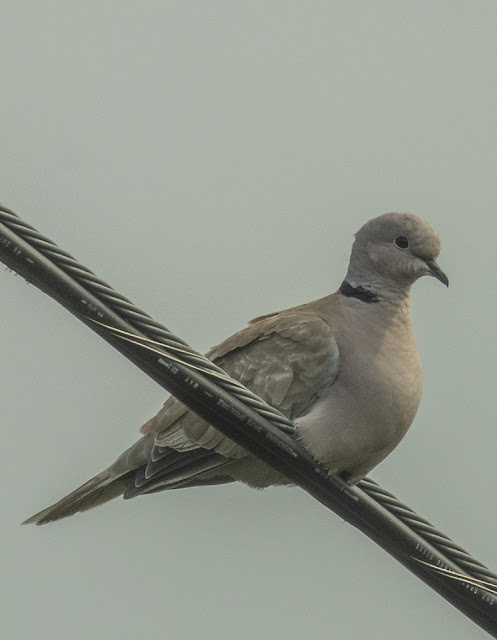