Thursday, May 30 : Craig did his last volunteer job of the spring this morning, meter reading, here at Jojoba. This park was built by volunteers, and many of the things that keep down our operating costs are done by volunteers. This is a good thing.

I want to thank you all for the wonderful coments you left on my "To Blog or Not To Blog" post. It is the encouragement I needed to get going again. I wish I had kept up my blogging when my memories were fresh, but the pictures help remind me of the neat things we did.

The story of our Myanmar trip continues:

The inner walls of the Pagoda we visited in Mandalay were covered with mirrors. Some were being repaired. 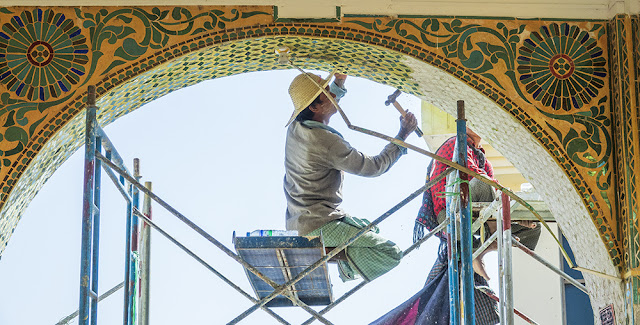 This is NOT a "racial slur", but I truly think some of the workmen I saw were part monkey! OSHA would never approve this balancing job as safe. The man in red is barefoot!

Nicki left us in Mandalay to go back to work in Yangon.

But, Joko had made such a great plan for us we felt we still had a "local" guide.

The weather continued to be cool and sunny. Perfect for outdoor sight seeing.


Our next stop was Pyinoolwin, where we spent some time at a botanical park. 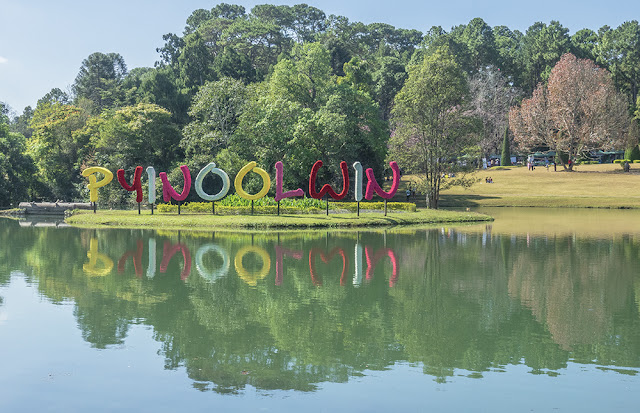 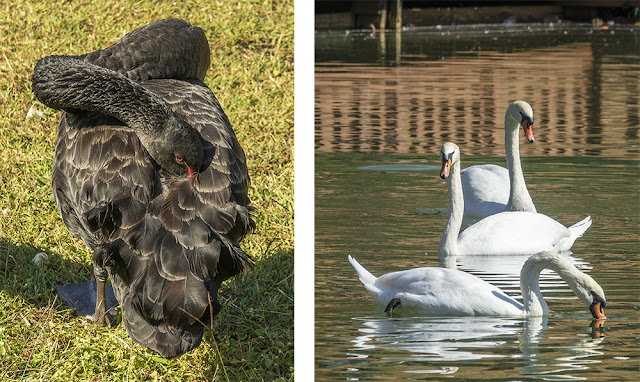 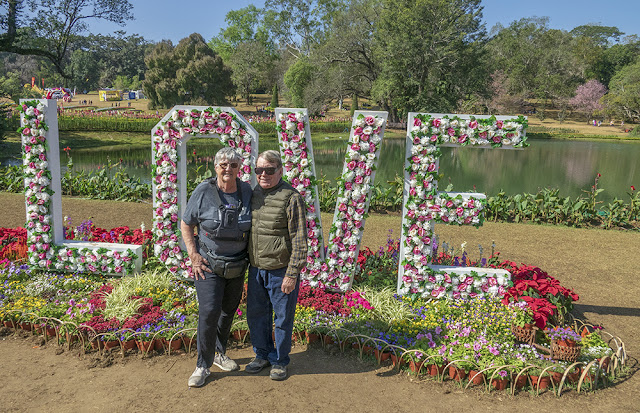 Although there were many beautiful plants in bloom, the flowers in this piece are all fake. I guess they didn't want LOVE to fade. 🙂

We chose not to get lunch from one of the vendors even though the menu included a couple of "Western" items: Cheese Sandwish, and a Mini Barger.

After we checked into our hotel, we went off to explore the local market. The pictures speak for themselves. 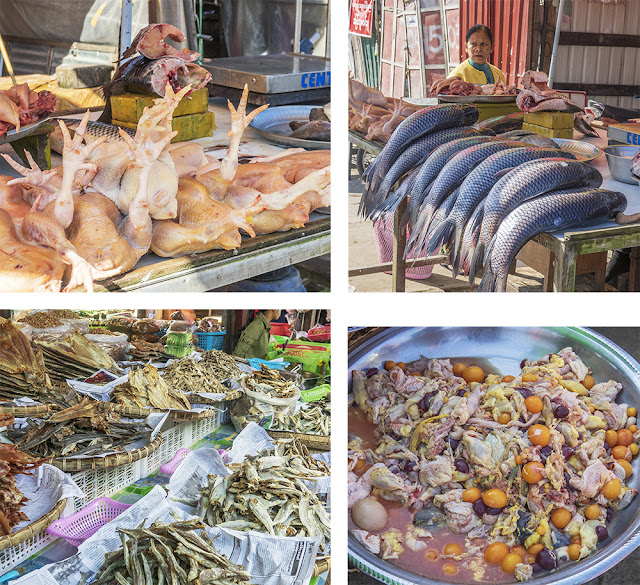 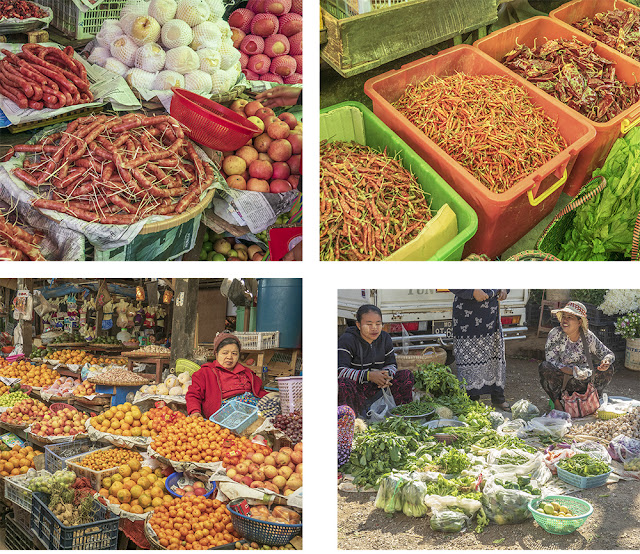 Of course there were many nonfood items for sale as well. These markets can be found in every town. They are where the locals buy their food on a daily basis. On seeing this plenty, I understand Nicki's insistence that "Myanmar is a rich country." It may not be rich by Western standards, but the people do not go hungry.

To top off a facinating but tiring day, Joko and I went for a foot massage.

We opted for the full, clothed, body massage. Oh so good. I was too relaxed to take more than this one quick shot of Joko!

Much more to come!

Posted by Merikay at 7:21 AM No comments:

Chores, and #9 of the Asian Trip series, On the way to Mandalay


It is the last Wednesday in May.  We are at Jojoba Hills, taking care of last minute jobs like washing windows and making decisions about some things that need to be left behind in our shed, or discarded.


I had this post ready to go when I stopped blogging.  As promised I will finish the story of this, the biggest trip we will ever take!

After coming back to the Hotel from our balloon flight, we ate a third free breakfast, and then we all took much needed naps.

Our New Year's Eve was very low key.  We left the parties to the younger set since such celebrations are long past our bedtime!

The hotel did provide a very nice buffet dinner (free) at a civilized early evening hour, and after dinner Joko and Nicki went off to another hotel where they had been invited to a party.

New Years morning we were on our way to Mandalay. I like saying that! It seems so exotic.  Although it was only a little over 100 miles, once again the road was not a super highway, and we saw some very interesting things.

Having Nicki along to read the road signs was a very good thing. Some, but not all, were also in English.

There were a few times we made wrong turns because there were no signs, but we always recovered. 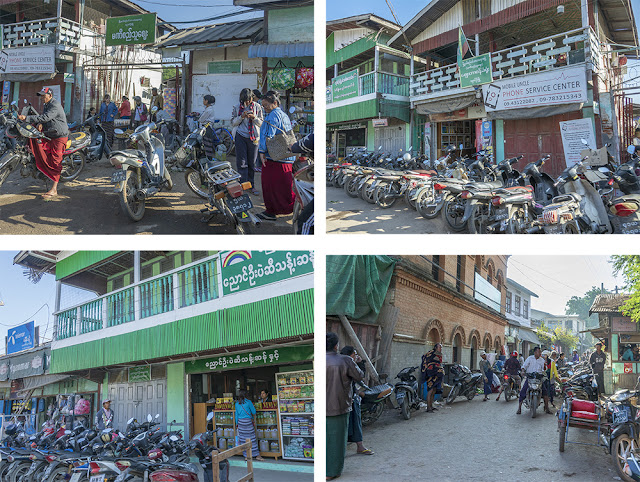 In the smaller towns, including Bagan, there were far more motorbikes than cars, and they certainly did not share the same traffic rules. No one seems to have a "right of way", including pedestrians. We squeezed down narrow streets more than once, and from time to time a motorbike was moved to make room for our big bad SUV.  [From Craig] I think some natives thought we were with the government.  Probably some of them had never seen such a big black SUV as our son had rented.

When we wanted to park, we just did, if there was room. 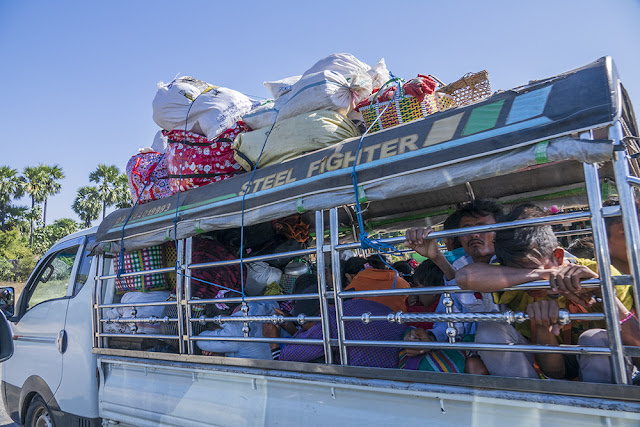 I saw a lot of this type of truck in Yangon. Sometimes with people hanging on the back, or even riding on top. People movers for sure, but they didn't look very comfortable.

Along the road to Mandalay we passed a few small herds of cattle both being moved and in the fields. Since 90% of the population are Buddhist, eating beef is fairly rare. According to the internet, the government does not allow the legal export of live cattle, and strictly regulates any slaughter for animals under the age of 12. Most cattle is raised by small farmers for use as draft animals, and for milk. None of the above cattle seemed to be milk cows, but a few had calves at their side. They all seemed to be fairly young animals, and a single herder was able to keep them moving.

For lunch, we stopped at the Ave Maria Restaurant on the Myitnge River. 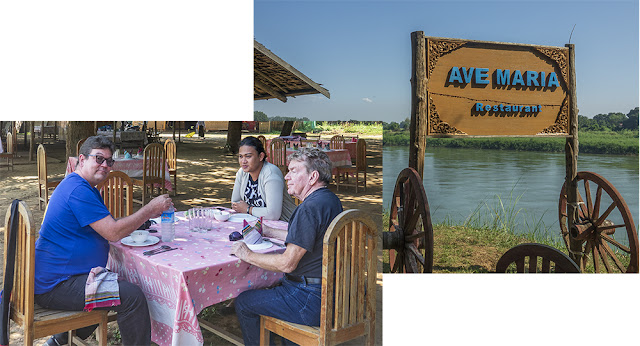 Joko had been there before on one of his many motorcycle excursions. He made his mother proud with how well he planned this trip.

The weather that day was beautiful and we enjoyed watching a large group of tourists disembark for lunch, from a couple of small boats.

Lunch was delicious and the service was excellent. The waitpeople and hotel staff in Myanmar were all so nice to us. They seem like a happy people. 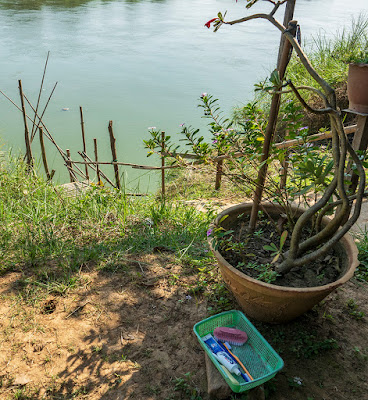 Many of the rural homes do not have indoor plumbing, and I later learned people use the river to wash their clothes and to bathe. But I was a bit surprised to see this little basket of personal hygiene items (soap, toothbrushes, toothpaste) sitting next to the planter by the dock steps. I guess, someone took a bath before work.

But do they brush their teeth in the river?

Next stop was the U Bein Bridge, which is the oldest teak bridge in the world. It crosses 3/4 mile of a lake. At this time of year the water level was low, and the bridge towered over the swampy waters on very old pilings. 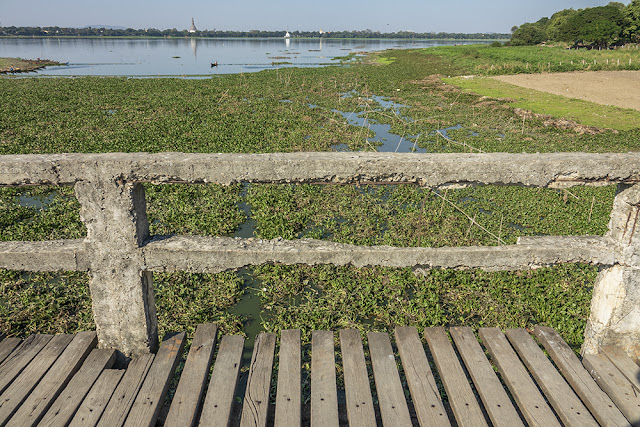 We started to walk out onto the bridge, but turned back when I became a bit uncomfortable. I know teak is very strong, and was OK where there were side railings, but some of non-railed places with slightly wider spacing and a bits of broken wood spooked me.

We did not get a picture that showed the span or height of this bridge. This one, from the Web, was taken when the lake water was much higher.

There were several structures down on the lake bottom near the farming fields. I assume they are abandoned and washed away each year when the lake level rises. The one with the green tarp roof looked particularly temporary! 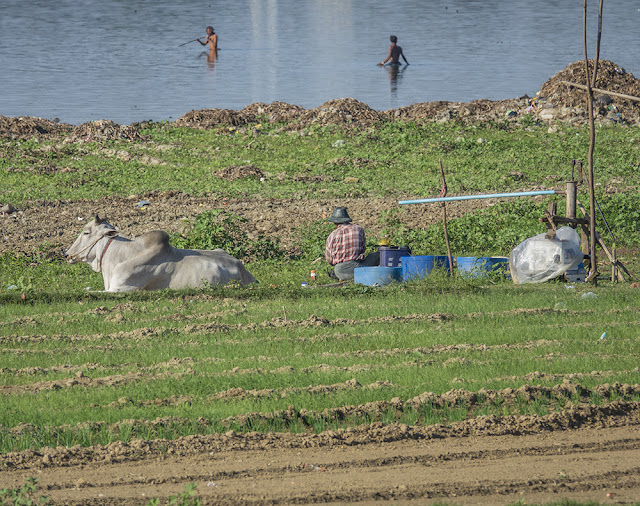 Like the farmers on the river banks of Bagan, they use their bullock in the fields. I think the men in the water in the background are spear fishing. 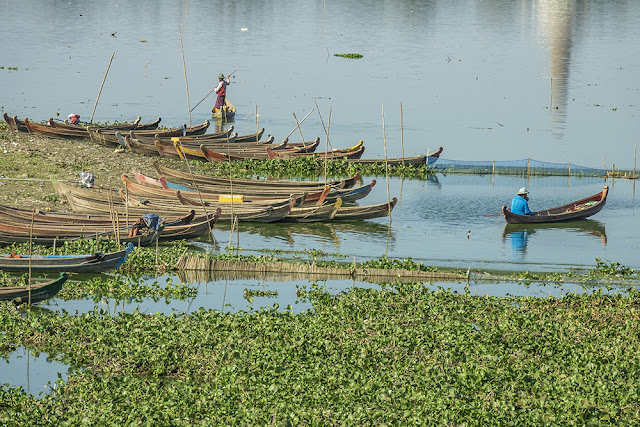 Long boats with a shallow draw are used throughout the region. 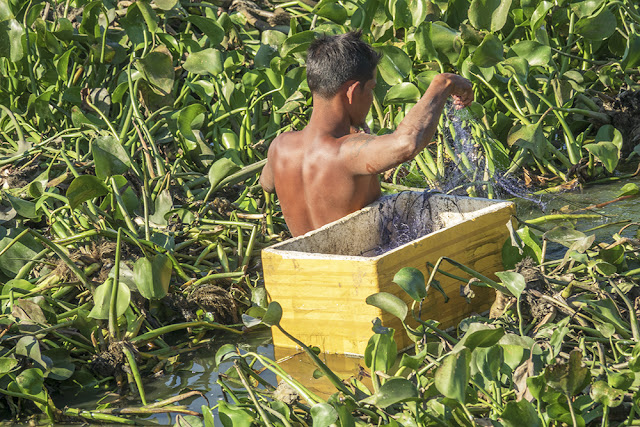 This young man was working very close to the bridge. We wondered what he was netting.

On to Mandalay! But on the way we saw a parade of children that Nicki thought were about to enter a monastery or convent. It is a time of great celebration for the families, much like a Christian confirmation or adolescent baptism.

First came the parents or sponsors.

Next in line were boys on individual decked out horses. 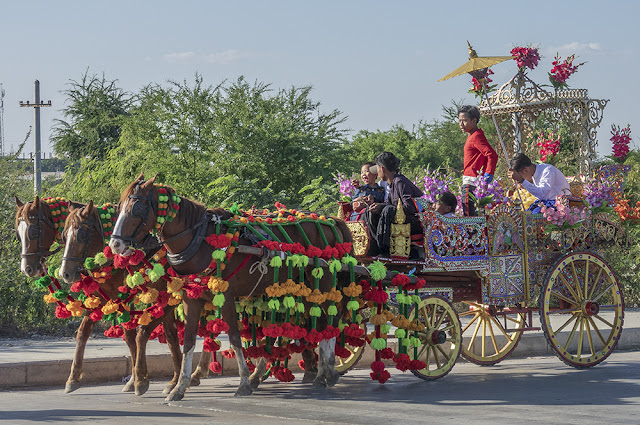 The boy in the back, wearing white, was the honoree. We assume the horses and carriage were either rented or provided by the monastery for a sizable donation. 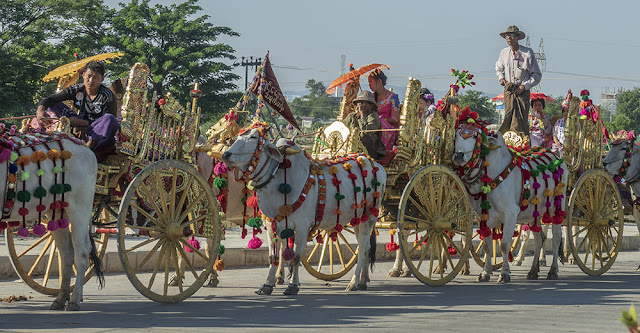 These bullocks knew their job was to pull these fancy golden carts.

I think the child in the first cart of this group was a little girl. Maybe that is why these carts are not painted gold and the bullocks have far fewer decorations. Or possible the parents have less money to donate. 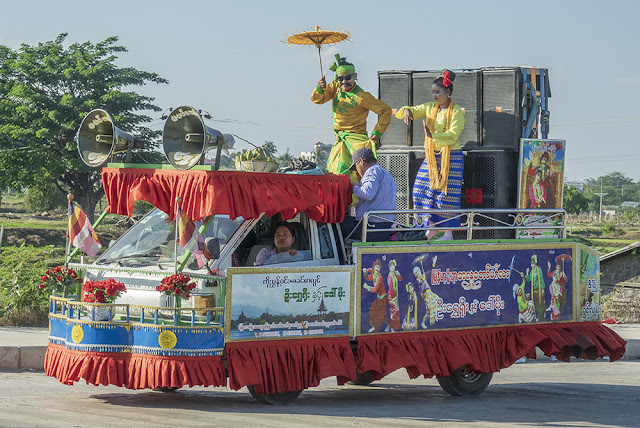 And at the end of the procession came this musical truck with large speakers and costumed dancers.

Although we certainly didn't understand all that was going on with this event, we did appreciate and enjoy the happy and colorful atmosphere.

The day was not yet over!
That's what happens when you stop for a parade.

We still had to get to our hotel and go see something Joko wanted to show us, the world's largest book: 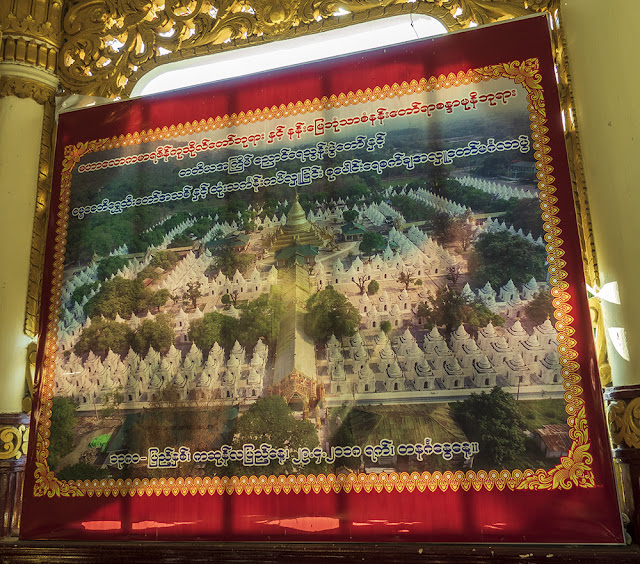 Yes, another Buddhist Pagoda grounds.  In the 1860s the king of Burma feared the British would destroy sacred Buddhist texts. He had 729 marble slabs carved with the writings, and then enshrined each page in a white marble shrine built around the Kulhodan Pagoda.

It is known as the worlds largest book. 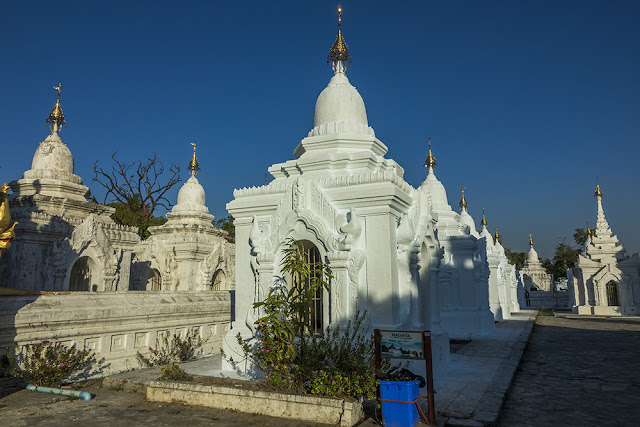 Once again I was amazed.

We walked around the grounds and visited the Pagoda.

Later we drove around Mandalay and looked at the walls of the old royal palace that is now a military base.

It had been a very busy day and once again we went to bed shortly after dinner! 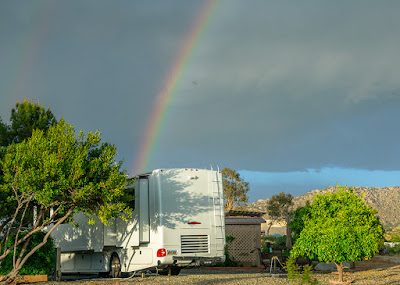 Except for our January trip to visit our son in Myanmar, we have been quite content to stay put on our site at Jojoba Hills RV Resort near Temecula, CA since the end of October.

There really has not been much to post about. We have been quite healthy and at peace. Actually, "lazy" would be the best description of our days at Jojoba Hills. 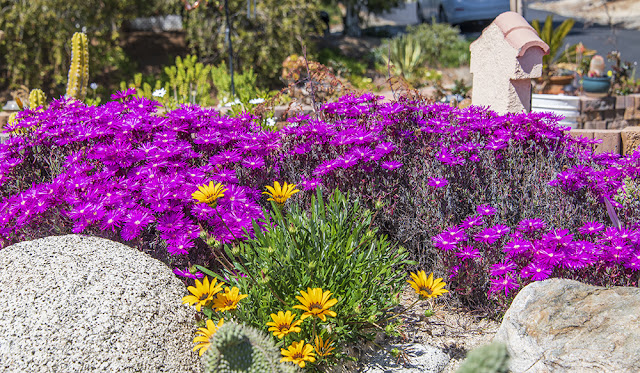 With this to look at out our side window,  who can blame us! 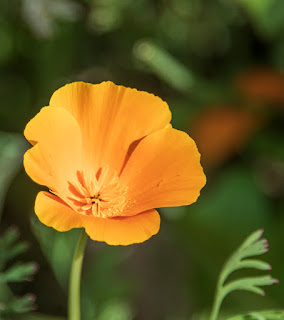 The Spring weather has been terrific. There was a lot of rain, and in breaking the California drought, it caused a super-bloom of wildflowers.

A single California Poppy is a delicate bit of beauty.


When billions bloom it is a sight to remember. 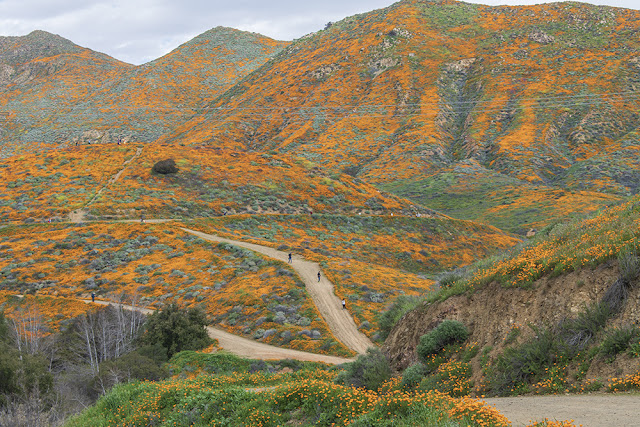 We went for a hike in the poppy covered hills near Lake Elsinore, (about 20 miles from Temecula) a week or so before they peaked!  It actually got better than this! One weekend there were so many visitors they had to close the road and trails. 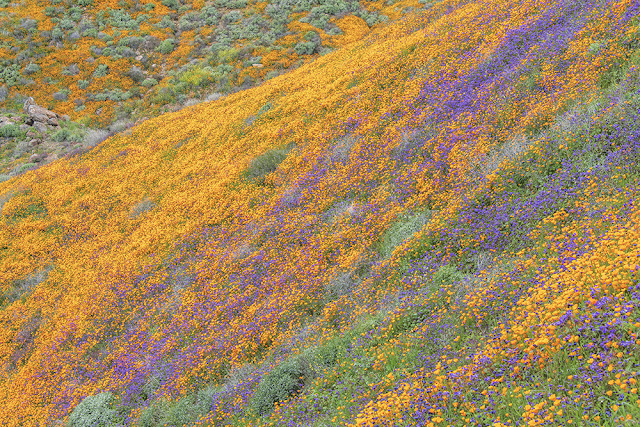 We took hundreds of pictures that day. This was one hillside where the poppies were intermixed with pretty purple flowers.

On another day we drove over to Diamond Lake (near Hemet) to their Wildflower Trail. 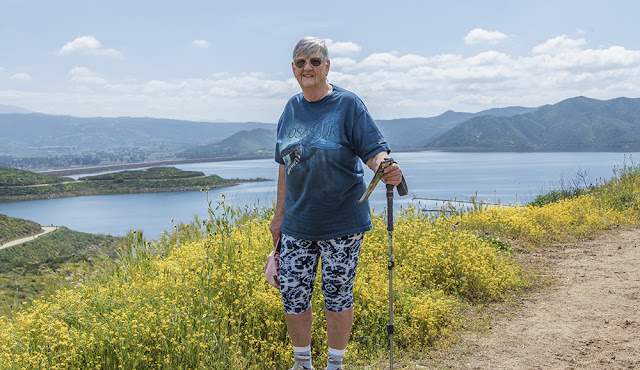 Although there were some poppies, most of these hills were covered by a sea of yellow blooms. 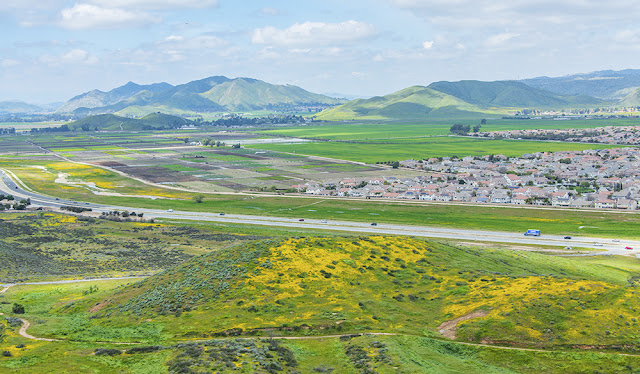 A view from the trail that would make a great jigsaw puzzle. 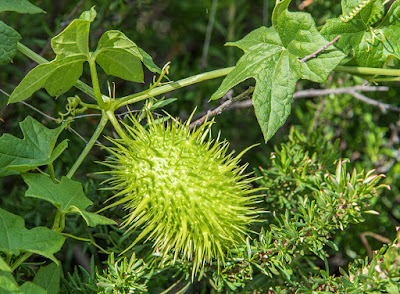 Sometimes you have to just look down at the weeds along the trail to see the magical shapes of nature.


I didn't finish the series of posts about our Asian trip, but I plan on finishing that story  as "second parts" to my regular posts over the summer. I was never quite sure writing about our trip really belonged in my RV travel blog, and got a bad case of "writer's block".

So, on June 3 we will be pulling out again in the Alfa, and will be visiting Colorado, South Dakota, Nebraska, Minnesota, Ontario, Michigan, and then heading back to California by way of Phoenix and Algodones, Mexico.  Being a very organized person, I have made reservations for most of the trip.  You can see when and where we will be on the side bar, to the right,  under Pages.
Click on: Summer 2019, Locations and Dates.

I hope I can get back in the groove of blogging.  After all, it is a great motivation to take and process our pictures. I do enjoy writing about what we are up to, and hope you will enjoy sharing our new adventures.