We Are NOT really stuck in Iowa!

It seems that my blog gets stuck every year as our annual travels come to an end. I never seem to get around to writing that last couple of posts.

My last post this year it was on October 15, when we started heading south.  We left Minnesota just as the weather started to change. I really enjoyed seeing the fall colors, but it was time to leave, as many of the parks were shutting down for the season.

So I start this post with a couple of pictures to go along with the "Update" Craig left on our last entry:

[Update from Craig] Older rock fans might call Clear Lake IA "the place the music died".  In 1959, Buddy Holly, Ritchie Valens, and "The Big Bopper" J. P. Richardson were killed in a plane crash near here. 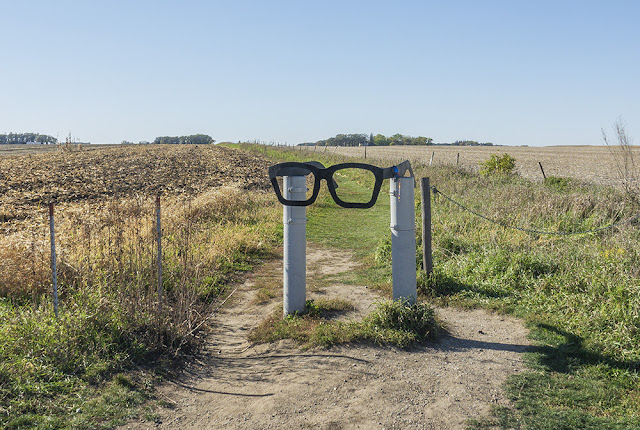 A giant pair of eyeglasses are the only identifying marker to the path to where their airplane crashed. 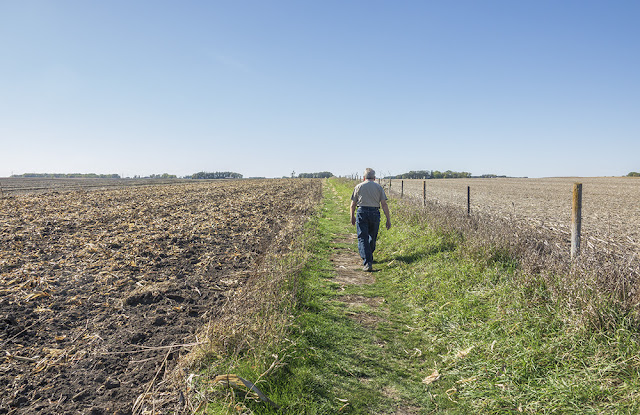 The walk in was about 1/2 mile. You could see the way was well worn by the feet of visitors. We met one couple coming back when we arrived, and one couple arriving  as we were leaving. 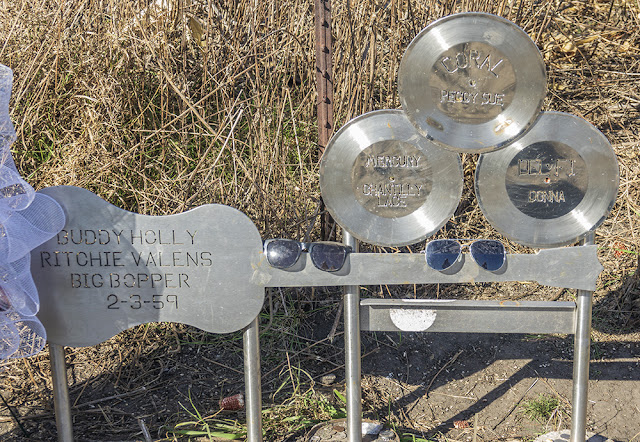 After Clear Lake, Iowa, we stopped in was in Missouri, and Arkansas. I had my doubts about the park in El Dorado Arkansas. It was named the "Gator Den" and was described as rustic on the edge of a small pond. There was no office, and when I called we were told to pick a site and call the owner who would "come by." It turned out to be a delightful place with a very nice pond, no alligators, and a pleasant proprietor. He had asked where we lived when I called. When he came by to get our check he explained that he did not allow anyone who was from less than 50 miles to stay there in order to discourage locals with broken down rigs from taking over.  That was fine with us.

From there we went to Louisiana for some routine maintenance work by Ronnie Wolf at Albrittons. Alfa owners know it is a great place to get our coaches fixed.

As I plotted our route home to California, I noticed we would be passing near Carlsbad Caverns and the White Sands National National Park. I had been to Carlsbad many years ago, but thought it would be a nice place to visit again. 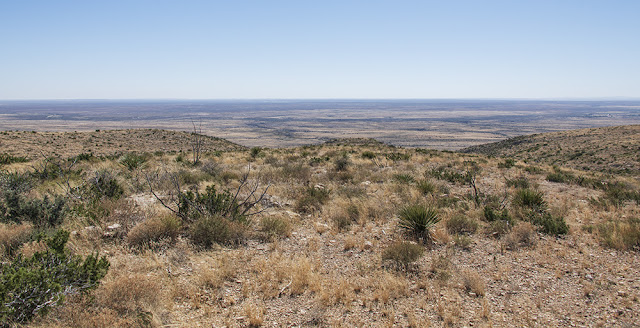 When you look out over the land from the Visitor's Center it is hard to guess the wonderful cave that lies below. 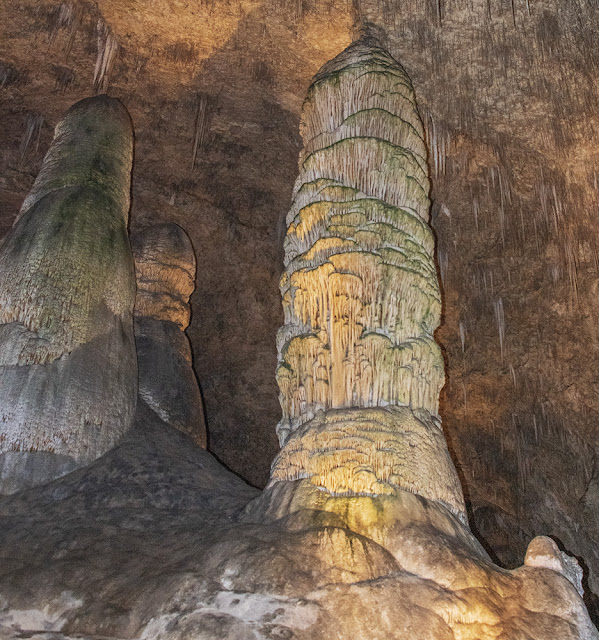 While I would never want to be a spelunker, exploring unmapped or wild caves, we do enjoy going through those that have paved walkways and lights to make it safe for an old lady like me. 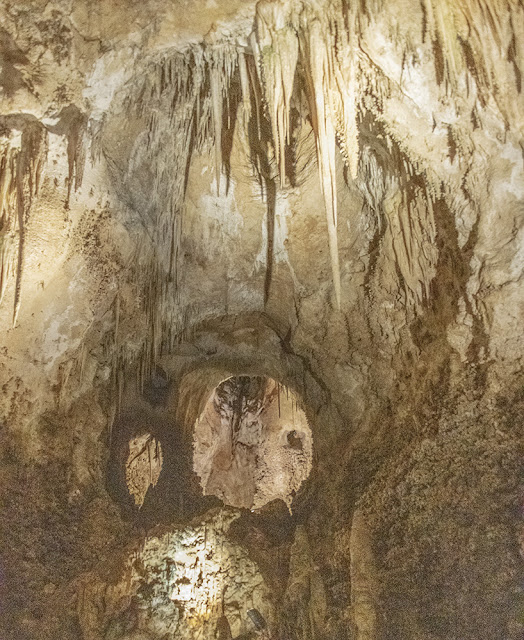 I think Craig took close to 100 pictures in the cave. It was very hard to select just two. 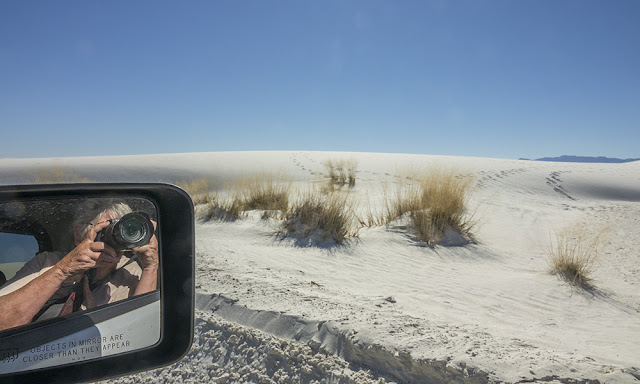 Our next stop was the White Sands National Park.
From Google: The sands of White Sands National Monument are formed from gypsum, a soft mineral often left behind when water bodies evaporate. ... Over many years, gypsum crystals deposited in this basin were subjected to freezing, thawing, and wind, and broke down into tiny grains. 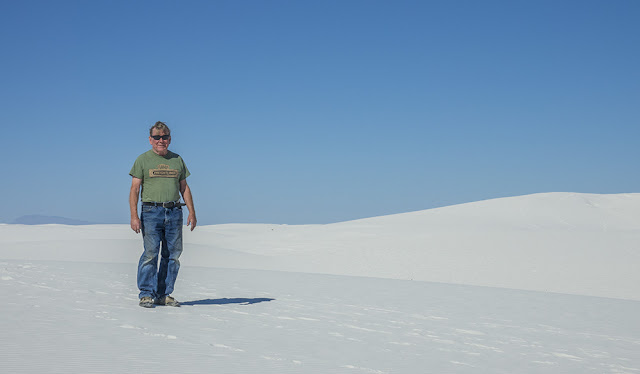 I saw this good looking guy just standing out there on the sands, and I couldn't resist taking his picture.

The white gypsum dunes cover 275 square miles. There is an easy loop road for the public and many places to pull over and get out to explore.
We stopped a few more nights as we drove West to California. We try to limit our days drive to 300 or less miles.
So, now we are back in Southern California at Jojoba Hills, an SKP RV resort.  We will be here for the next five months. We are close to our daughter, and enjoy the activities and people in the park. I have started playing in the pottery studio and am splashing in the large heated pool doing water exercises three days a week.
I might put up an occasional post, but if I don't, please check back next spring. We are already planning new adventures.
Posted by Merikay at 6:54 PM 4 comments: