The problem described below was solved.  It seemed to require two people to push down on either side at the same time and then the strut released and glided closed.  There was no "release."


Thank you to those who gave helpful suggestions.  It made me less afraid of breaking something by forcing it down!

Before the above edit:
This may be a strange short blog, but I need some help from the other Class A owners.

I took off the mattress and raised the platform beneath it.  Just to look and carefully check it out. I was told to check for any signs of mold or mildew.  There were none, it is pristien.  Bu now the things that hold the platform up are locked in some way and I can't figure out how to release them.

I called the service manager at LA MESA and he said there was a "release" often red.  I can't for the life of me find it.

Does anyone know how to get them back down?

Craig may be able to figure it out! 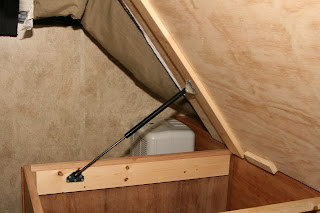 This is not ours, but they look exactly like this.
Posted by Merikay at 3:55 PM