We had quite a busy day at the RV park on Saturday. The park sponsored a Christmas event on the grass park space just across a walkway from our rig. They put up a cute white picket fence and holiday decorations. At 4:30 a truck with a snow maker came and filled the area with man made snow. There was hot cocoa, cookies, popcorn and hotdogs. Santa arrived at 5:30, and there was a tacky Christmas sweater contest and rig decoration awards. My daughter just happened to have two classic Christmas sweaters in her car that she had just gotten back from someone who had borrowed them for a similar contest. We each put one on, and I won the contest!  The prize was two tickets to the movies, so Craig and I will probably go see Catching Fire Monday night.

Knowing all of this was going to happen, I invited our Point Loma "family" for a late afternoon cookout at the Alfa. My daughter thought the kids might be "too old" for the snow play and Santa, but they got into it just fine, and helped the younger ones build mini snow men and make snow balls. The kids ignored Santa's tent, but my daughter and I got our picture taken with him. Just for fun!

The party was pretty much over before 7:00. Our guests left, and after a quick clean up of our site, we wandered over to our neighbors with a bottle of wine and enjoyed a couple of hours of conversation around their warming gas portable fire pit.


Except for taking up storage space in the bay, such a thing would be really nice to have. It felt warmer than a wood camp fire, and no one had to move to get out of the smoke. We aren't going to run out and buy one, but it is something to think about in the future. They said they bought it at Sam's Club for around $60.   If fire wood is as expensive in the rest of the country as it is in California, it would pay for itself very quickly. A night of propane would cost way less than a bundle of firewood, especially since our Alfa has an outside LP connection. Something to think about.

Sunday we went to the lovely home of one of our family for a tamale-making party. Some of us helped our hostess Josie prepare the masa, slice the cheese, cut the veggies, and shred the meat she had cooked overnight. 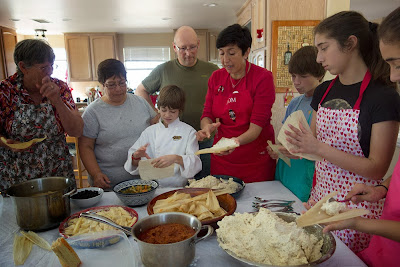 When all of the ingredients were ready, we gathered around for a tamale-making lesson. The boy in the white chef's jacket is my younger grandson. He takes cooking very seriously, and won this jacket when he took second place in a county fair kids' cooking competition. 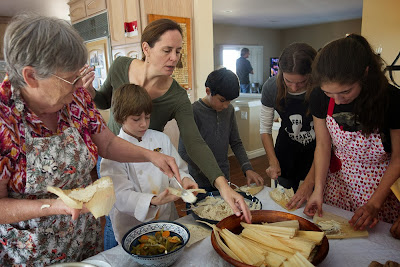 The women and children all pitched in. 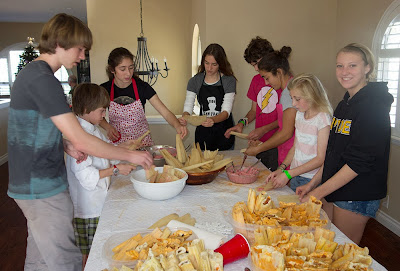 The kids finished up folding the last of the tamales while the women cleaned up. 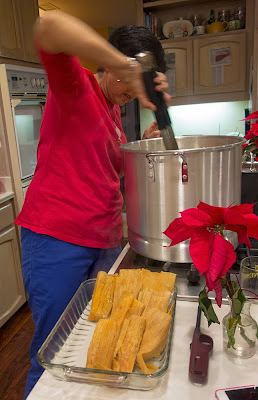 After steaming the first batch in a very large steamer, they were finally ready to taste.

They were the best tamales I have ever eaten. The kids loved them.

The men filled their plates and went back into the living room to watch football!

Sorry guys.  I'm really just kidding you about the game. It was the Steelers and the Packers after all.

Everyone was pretty happy. Craig is a Packer fan said that despite their loss, it was a terrific game. Josie's husband Max is from Pennsylvania, so he was pleased with the result.

We brought home a couple of dozen tamales for dinners in the Alfa. Josie also told me they were very good for breakfast, if I just fry them a bit and serve them with a sunny-side-up egg or two.

I now have a far greater appreciation for the simple tamale. It is a lot of work to make them from scratch, but oh so worth it. No wonder it is a Holiday tradition in most Hispanic homes.