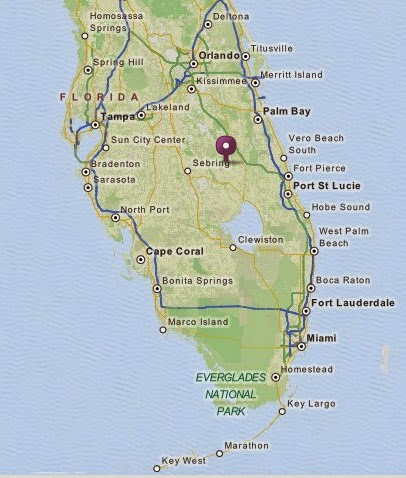 Kissimmee Prairie Preserve State Park is about 100 miles northwest from Jonathan Dickinson State Park. When making plans and reservations last January for this three month exploration of Florida, I wanted to experience as many different ecologies as I could.

From its name and description, I guessed it would be very different from the coastal parks or the Keys. I was correct, but somehow, to me, vast expanses of grassland prairie is still a bit unexpected in Florida. It seems this is one of the areas the land scammers of the 20s exploited. A railroad was built, and land developers brought people down from the cold north in winter and showed them the wide open land, just waiting for development. The air was sweet, the land was dry, and there were no bugs. Many sales were made. But when the new owners came down in the summertime they found their land was underwater, the air was hot with unbreathable humidity and filled with billions of mosquitos!

Over the years, much of the prairie was drained and cattle destroyed the native plants. Some of today's preserve is still leased out to ranchers, some is restored pasture land, and some original grasslands. 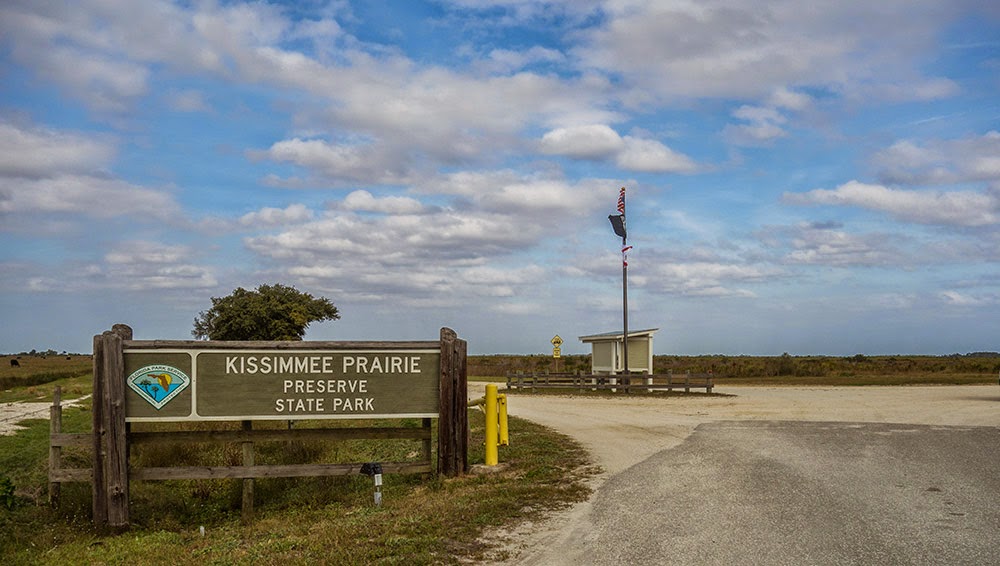 The park entrance is about 30 miles from the nearest town, and to get to the campground we drove on a five mile crushed shell road. 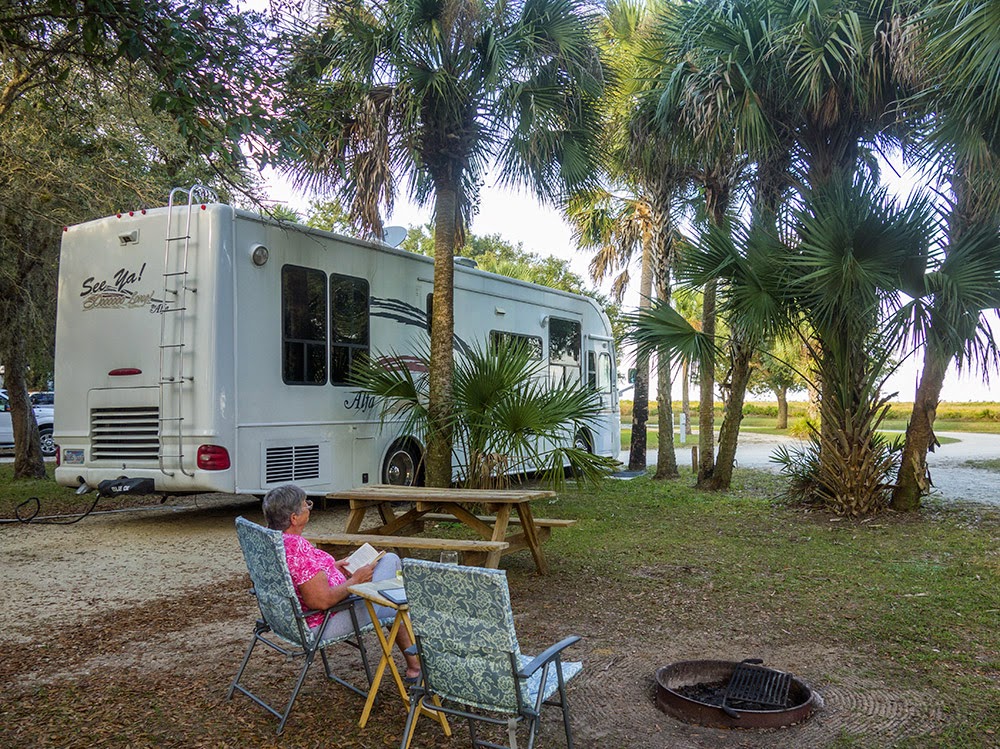 The campground itself is small (about 20 spaces in our section and about a dozen in the equestrian camp area) and delightfully peaceful. The spaces are large, but we had to park close to a tree in order to get satellite reception. 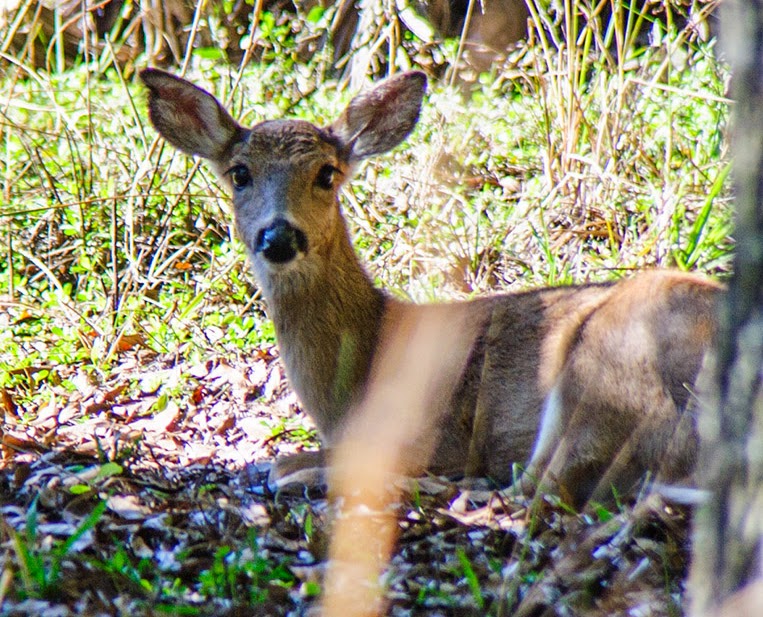 The weather was quite pleasant most of the days we were there. On Wednesday we took a walk through a shady hammock. We spotted several deer who seemed quite accustomed to people.

The sandy trail opened out onto the prairie, and we walked for a mile or so before we came to a wet spot. We were able to get around it rather than turning back, but I was glad I was wearing my hiking boots and had a pole to swish thru the grass as I went. We were later told that these are the places snakes are often encountered! I don't like snakes very much. 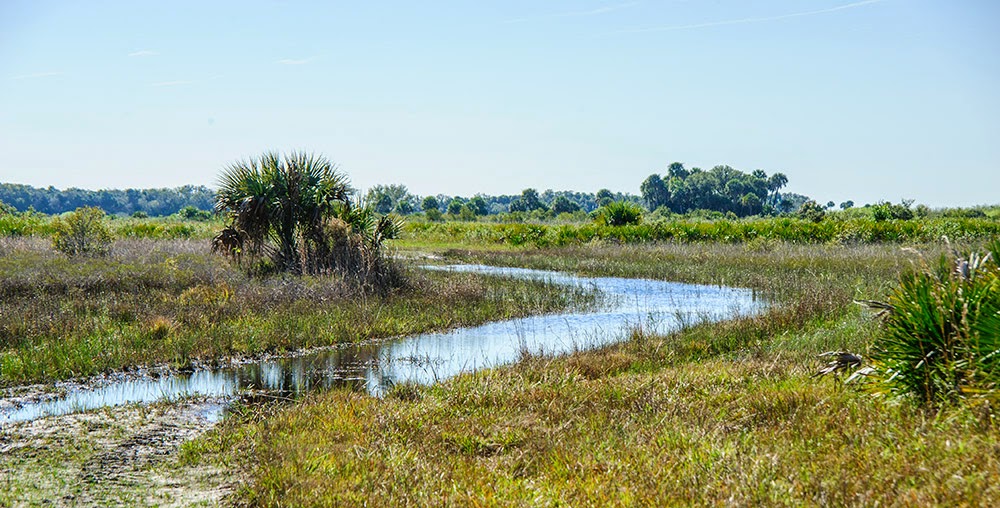 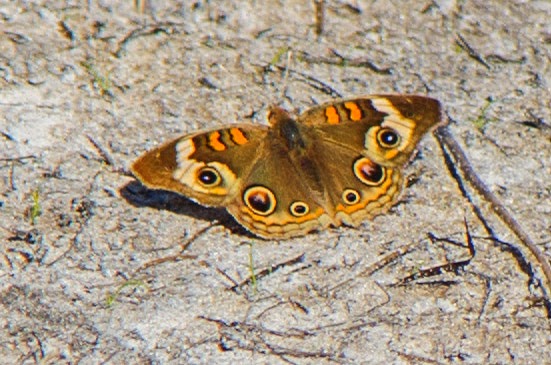 This is just a Buckeye butterfly, but seeing them in January is such a pleasure! 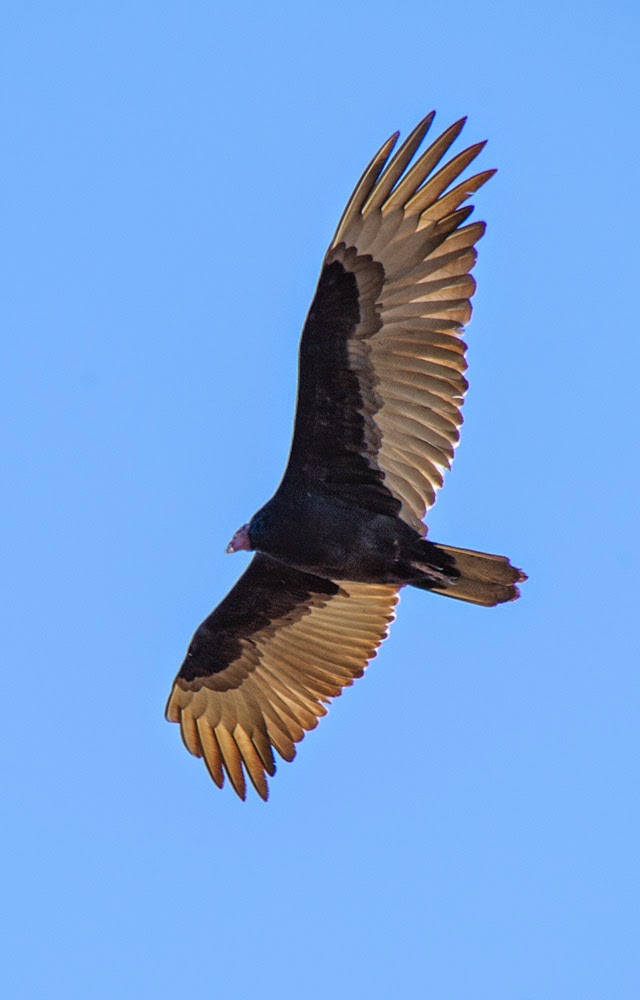 All through our time in Florida we have seen many Turkey Vultures. Seems they come down for the winter just like people.

Our walk was nice, and at just about four miles was a good warm up. We really need to get our hiking legs back after some rather lazy months. 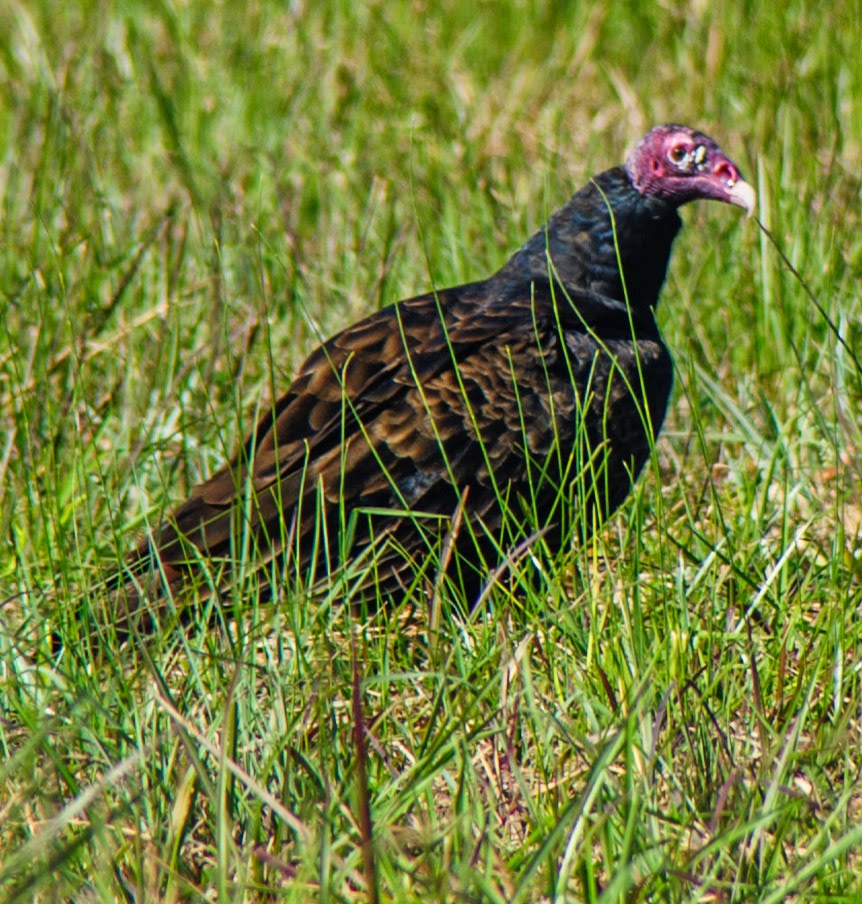 This Turkey Vulture allowed us to walk pretty close to him before he flew. As you can see, he has a red face and head. 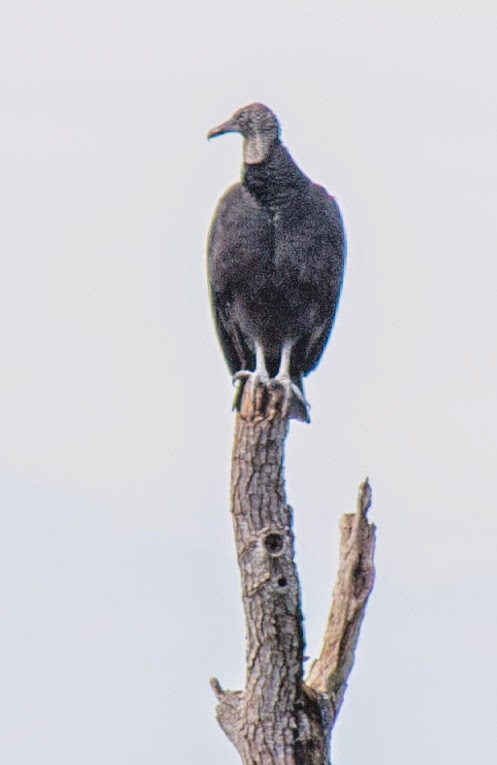 This is a bird I may have seen before but never identified. It is a Black Vulture. His head is light gray. The Ranger told us they gather in rather large flocks and will "eat the rubber off your windshield wipers if you park in the wrong place"! 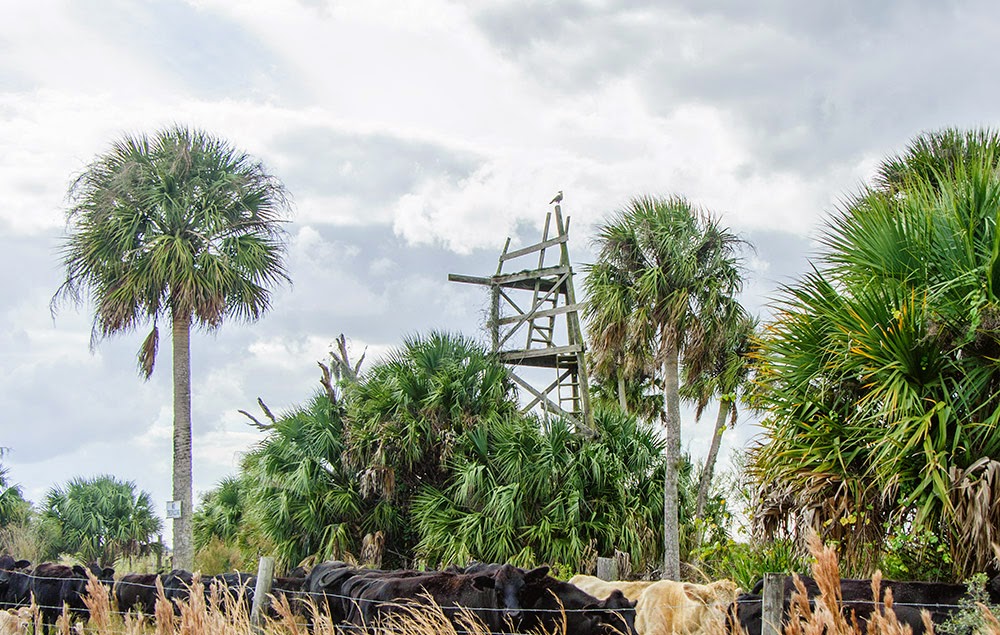 The main reason we came to KPPSP is that I wanted to see a falcon called a Caracara. I spotted one on our first drive into the park, and the possibility of seeing one there again was reinforced by the Ranger when he told us the Caracara have a nest near this old railroad tower. Unfortunately, our best view was on a day we didn't have the camera at hand. We saw one on a fencepost and its mate in the grass along the road. 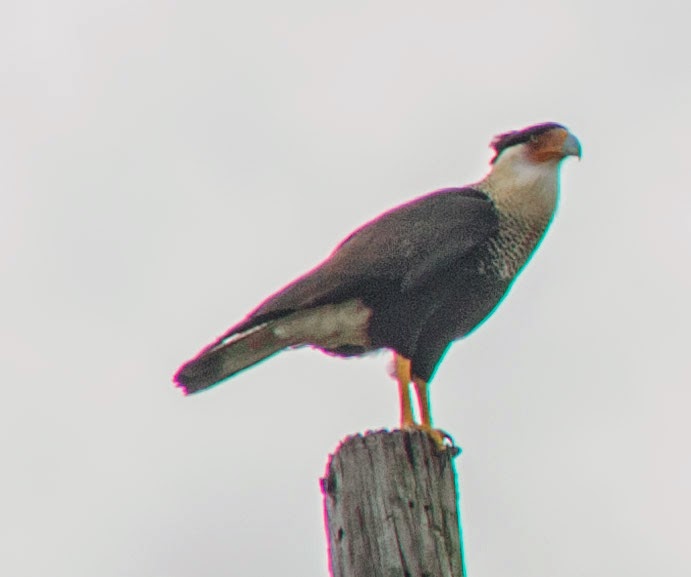 This is a bit fuzzy because it's an enlarged cropped image of one of our sightings.

He is really a magnificent bird. He is the largest of the falcon family, and eats small rodents, snakes, and carrion like a vulture. He will also hunt birds that he snatches out of the sky.

There are only a few locations the Caracara is found in the US.

The Caracara is the bird on the Mexican flag, where he is shown with a writhing snake in his talons.

This post will be continued in a few days.

We are presently sitting in our Jeep in Okeechobee where we can get enough internet to upload it. We have a shaky connection in the park, enough to read a bit but not post.