Last trip into NYC and more about Long Island Camping

I could have done without our fourth trip to New York City because I really didn't feel well.  We spaced out our tourist days, never going into the city two days in a row, and I had had a good nights sleep, but I just didn't feel good on Monday. 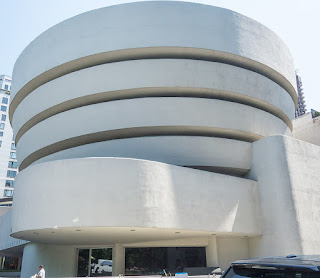 We wanted to go to the Guggenheim Art Museum, but when we got there discovered the main vestibule, which is the long curving down gallery was closed. 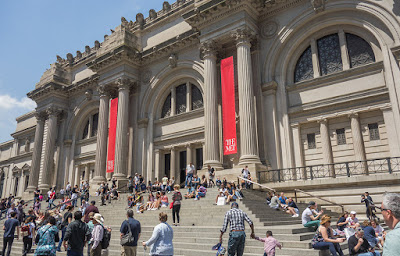 So, we left and walked a few blocks over to the Metropolitan Museum of Art instead.

There was so much to see: 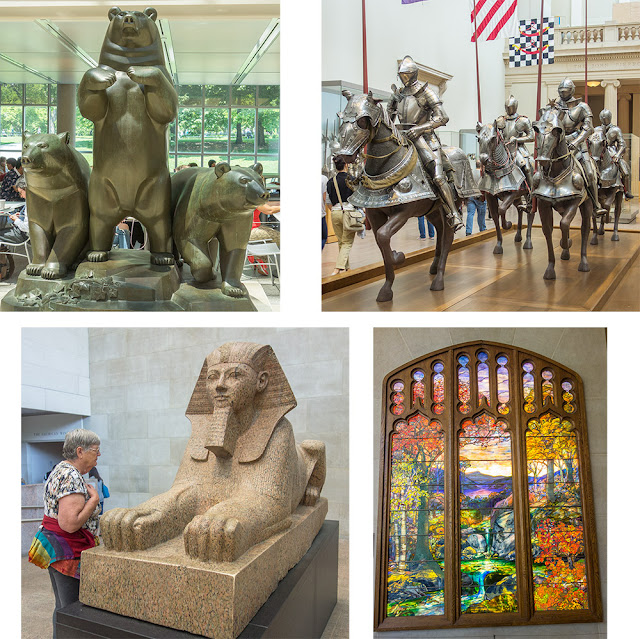 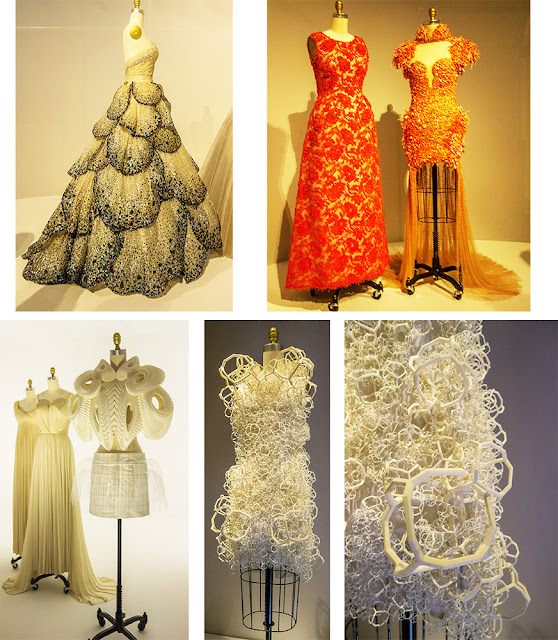 My favorite was a large gallery of avant-garde fashion designs. Craig teased me with "It's like Thursday night come to life!" I am an avid fan of the TV program "Project Runway", which challenges young designers to create forward-looking fashion. They do an avant-garde challenge and an unconventional materials challenge.

Mid-afternoon, we left the Met and walked across Central Park (the narrow way) towards the Natural History Museum.  Considering how I was feeling, we decided that it was one too many museums, and headed back to Penn Station instead.

The train ride home was uneventful and we had a pleasant pasta dinner at a little Italian restaurant in Port Jefferson.

I don't see how anyone could survive commuting like that everyday, but they do. Craig often had a fairly long drive to work, and for many years, my personal commute was down one flight of stairs to my studio. I sure was lucky!

All in all, our sightseeing time in Manhattan was just about what I expected. The city was a little bit cleaner (except for the subway stations) than I thought it would be. I was surprised to see trees along many of the streets. Of course since we were in our tourist bubble, I felt safe at all times and any people we spoke with were nice. I will have good memories of this trip, but no great desire to return.

Now, just to round out our experiences of the last two weeks, here are a few things about our campground and what we did on "non-city" days.

When looking for a place to call home while seeing New York City, I was quite frustrated trying to find a place that was a reasonable distance from the city, had hook ups, a nice surrounding, and a reasonable rate. There is one RV Park called Liberty Harbor, that is very close to the city, but the reviews were not good, and the $90 per night rate, for only water and electric, was a bit hard to swallow. It would have been OK for an intense two or three day tour of NYC, but we wanted to stay more than a week.

I looked at state parks in New Jersey, Connecticut, and New York. All would require use of the train system, so I settled on Wildwood State Park which was about 15 miles from the train station at Port Jefferson.

I booked our full hook-up site thru Reserve America. The cost came to $37.83 per night, which included a reservation fee and "out of state camper fee." Round trip train fare to Penn Station, was $18.00 each (senior off peak).

The only down side was that it took almost two hours to get to Manhattan. The first few trips were an adventure, but commuting got "old" rather quickly. 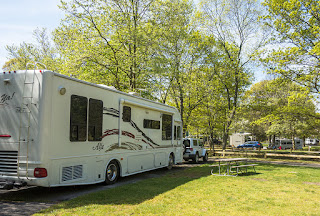 On our non-tourist days we enjoyed a very peaceful, uncrowded setting.


If you look at the map above you will see that Long Island has two Eastern "legs." We drove out to each.

Montauk Point is to the south.

We decided not to climb the spiral staircase to the top of the lighthouse, but we did enjoy the view and the small museum.


The Saturday we were there, a couple was getting married on the lawn below. It was very windy, the bride was late, so we didn't stay to see the ceremony. 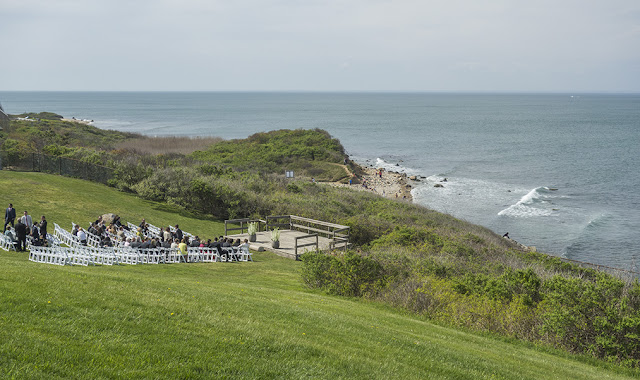 It reminded us of when our daughter had a sea-side wedding in San Diego and she arrived at the hotel dock on a sailboat. She was  dressed in her beautiful white gown, with her father giving her away.

We also drove out to the northern Orient Point. 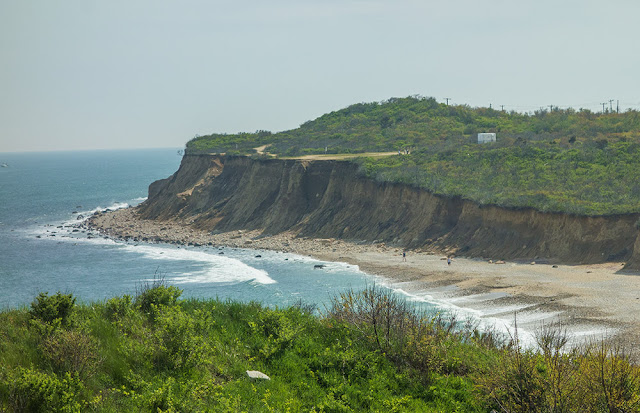 We were able to see where the Sound meets the Atlantic Ocean. 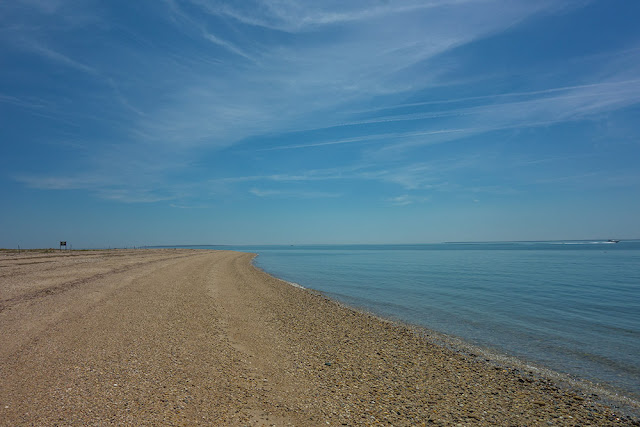 We stopped for a nice walk on a secluded stretch of beach. What a contrast to the busy city streets! 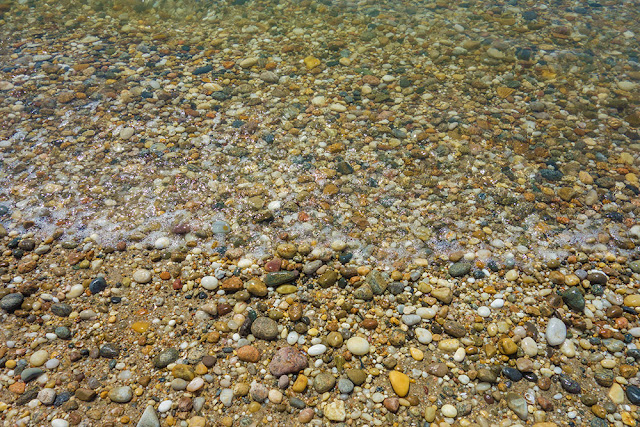 As we walked along the water's edge, I couldn't help but to think of how diverse and beautiful the stones were, more so than on other beaches we've walked. Each an individual. Each shaped by the force of its time on earth, and at the same time maintaining its base color and identity.
So much like our nation.
Full of diverse beauty.