After our maintenance work in Salt Lake City, we are working our way southwest towards California. On Wednesday we stopped to take a hike in Utah's beautiful red rock county. I took a blogger's day off and gave Craig the job of writing this post.

[From Craig] On Wednesday we went hiking on Kanarra Creek Trail. At the start we paid $10 to park in a city lot.

Because a popular social medium shows a blog post's first image in an announcement, I'm putting my favorite image here, though it's way out of order. 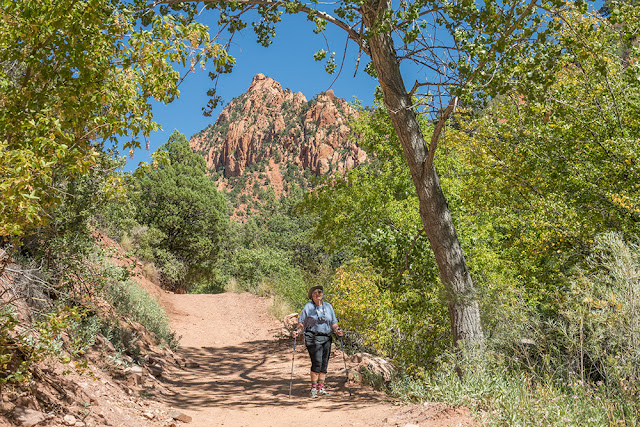 The handsome red rock in the middle, will be seen in its proper place in the time sequence.

We discussed the fact that the trail was rated "moderate" before deciding to try it. At the start of the trail, this sign "upped the ante":

but we decided to "go for it".

The trail climbs fairly steeply at the start. We noticed that a farmer down in the valley has planted a tree line to protect his field from wind, but the trees haven't yet grown into a full wind-break. Maybe we'll come back to see them in 20 years. 😉

We crossed the creek several times. I kept my boots dry by picking my way over rocks and downed trees, but Merikay took the easier route by walking through the water. 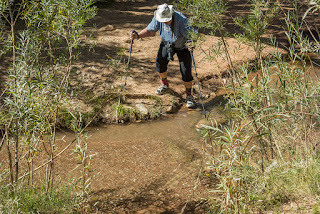 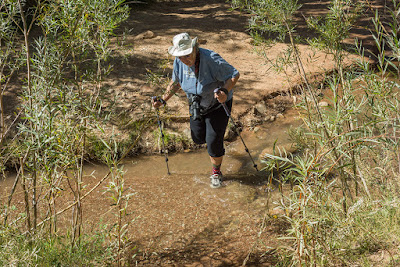 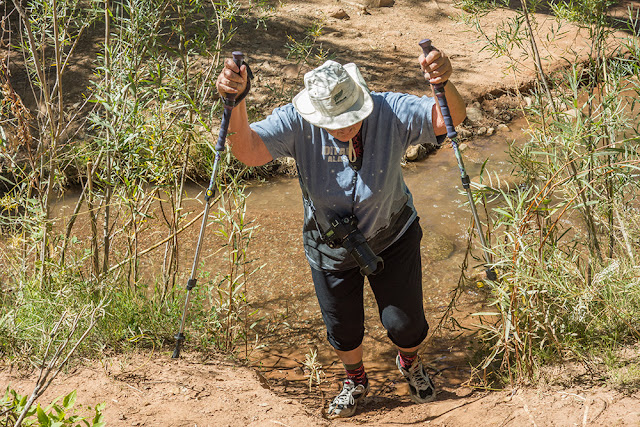 But most of the trail that we hiked was fairly dry. 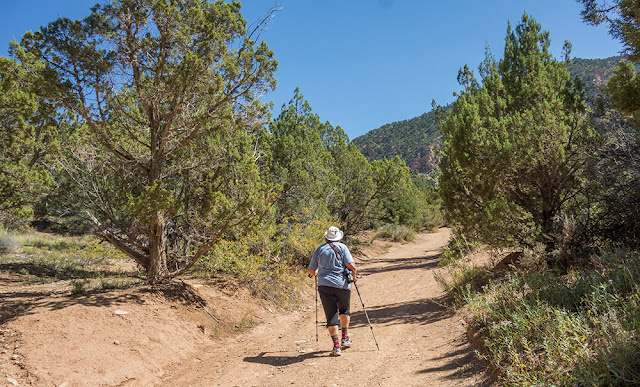 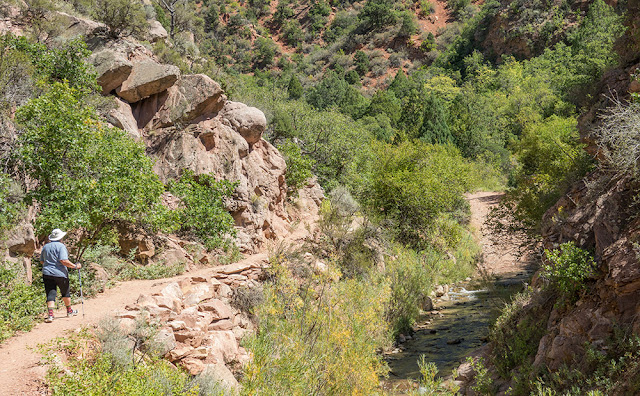 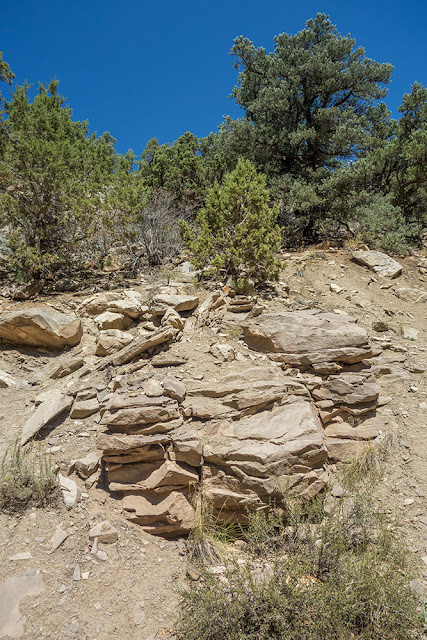 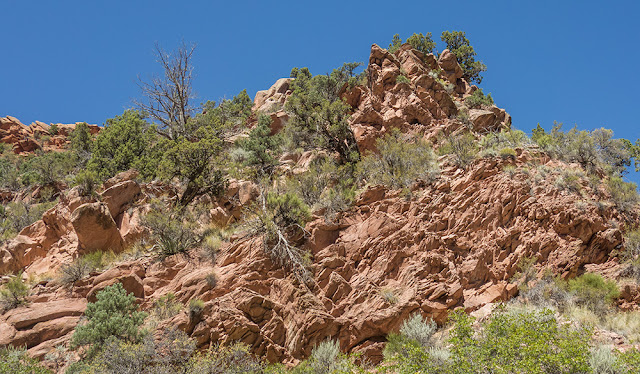 This is where the initial image of Merikay posing on the trail should be, followed by the following closeup of the big red rock in the center of that picture. 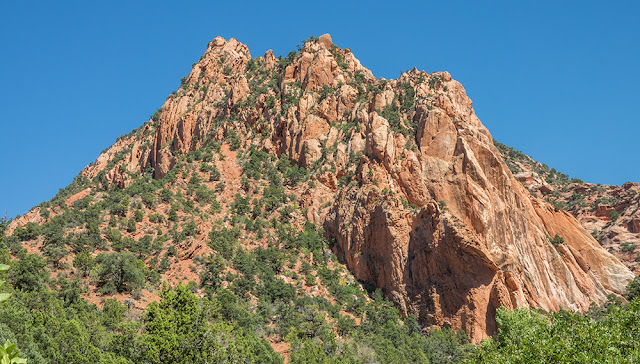 Shortly after taking this image, we came to a point at which the trail got quite difficult, and Merikay's shoulder injury (from Talkeetna Alaska) wouldn't let her cope with the hard part. So we sadly turned around, and this post doesn't include any images of the waterfalls and slot canyon that were still ahead. The lady who ran our campground later said we should have bypassed that hard part of the trail by simply walking up the creek. Maybe we can remember such tactics in future hikes...

As we hiked back, Merikay noticed a jet plane making a contrail above. She zoomed her new camera and took several shots. This is the best of them: 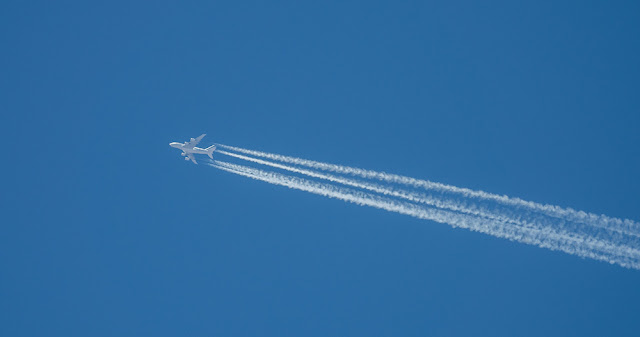 This may have been a plane that had recently taken off from Salt Lake City, but it was more than halfway up to cruising altitude.

Not to be outdone in the telephoto category, I borrowed her camera and zoomed in on this horse grazing, down in the town of Kanarraville. Both of these images are at the camera's maximum zoom of 600 mm (35mm equivalent). 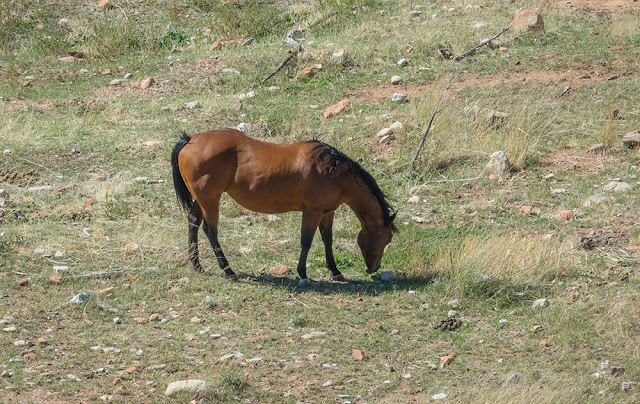 By the end of our hike, Merikay seemed to have gotten over her disappointment at having to turn back from our goal of the first waterfall. 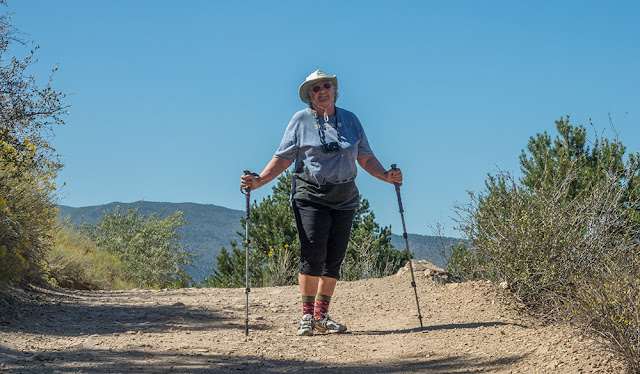 Just wait 'till she gets that shoulder treated!  🙂🙂