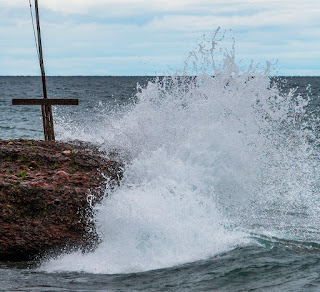 On Friday we drove from Munising to the Sunset Bay RV park on the Keweenaw Peninsula. It is a very rustic place just south of Eagle River.

We had a direct view of the lake from the front window of the Alfa, and when we arrived the wind was really blowing and waves were pounding the shore. 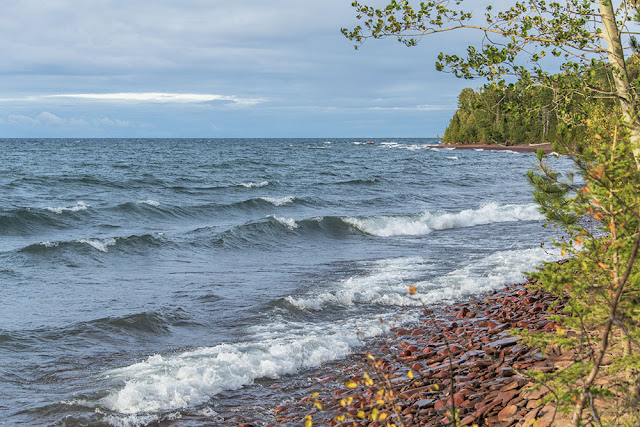 There sure was no sand on the beach, just lots of red rocks.

Although the weather had been blustery, Sunday was beautiful and we decided to drive to the tip of the Peninsula and see Copper Harbor and Fort Wilkins Historic Park. If you blink when going through Copper Harbor, you will miss it. But Fort Wilkins, just a bit further on, is well worth a stop. 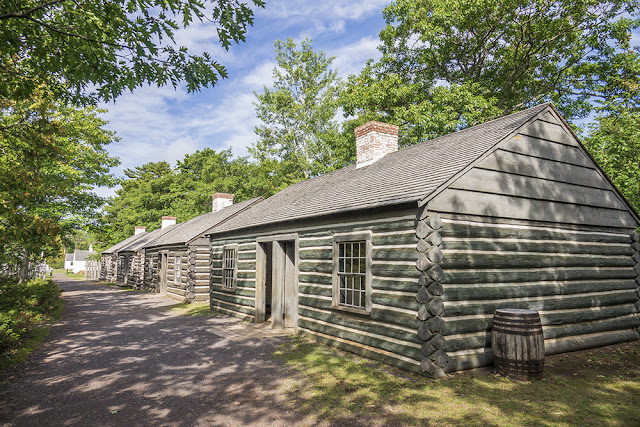 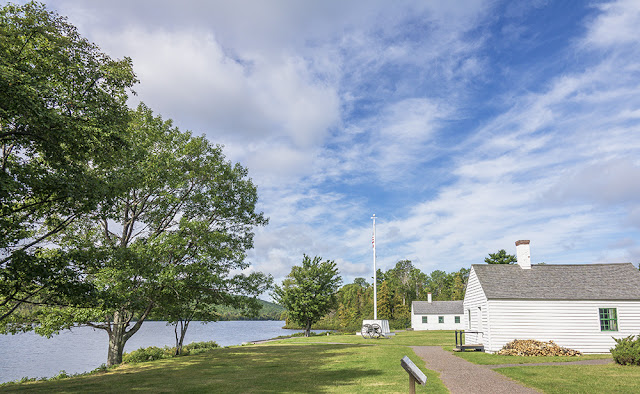 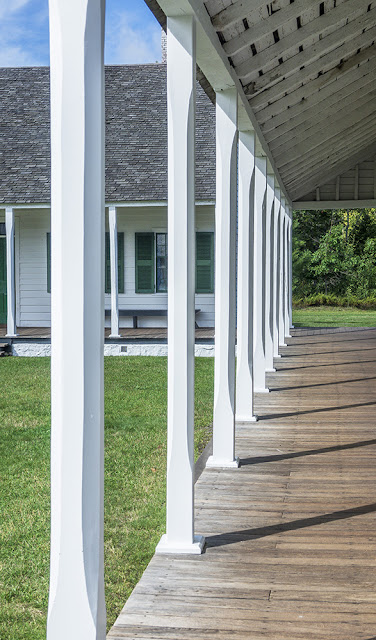 Our walk around the fort was quite interesting. It was built to protect the copper miners and fur traders in the area. 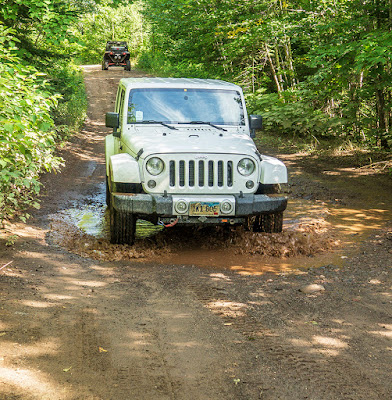 Next we tried to drive out to the furthest point of the peninsula on a rough road, but missed the turn and ended up on an even rockier road more suitable for ATVs. Glad we were in the Jeep!  I was too busy holding on to take pictures, but when we came to the last mud puddle I got out to document the drive.

Later, back at the RV park: 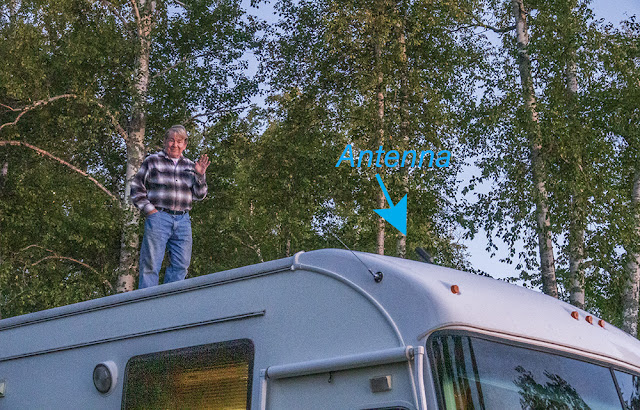 Just to give proof that when it comes to taking care of the Alfa, Craig is on top of it! A tree branch had caused our cell phone antenna to bend down as it is designed to do when something hits it. This may keep it from breaking off, but then it is necessary to manually return it to the upright position.

Sunset Beach is aptly named. This is one of the sunsets we have enjoyed here.

From there we headed west along the south shore of Lake Superior to our last "planned" stop this summer. We met up with Fred Reinke, a high school friend of Craig's, and his wife Joan at the Union Campground in Porcupine Mountain State Park.

It rained much of the week, so we spent a lot of our time hanging out in the rigs talking and eating. 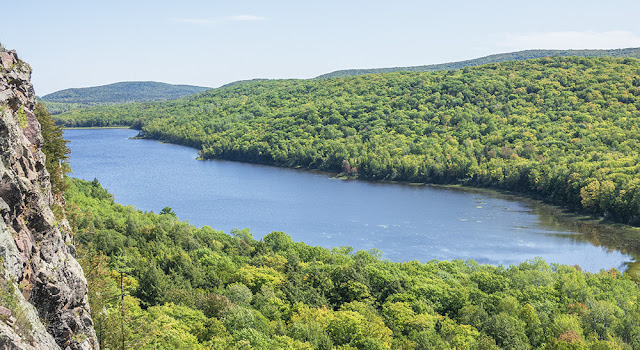 We did go over to see the Lake of the Clouds. Fred doesn't get around very well due to serious back problems, so we were limited to a short walk up to the overlook.

On the next day, Craig and I went for a five mile hike to Trap Falls. 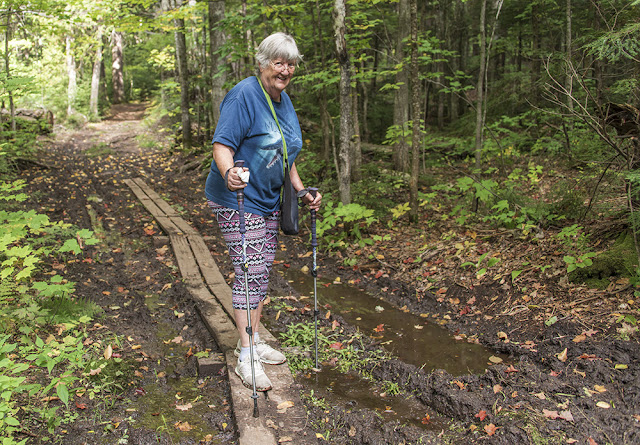 The trail was quite muddy in places. 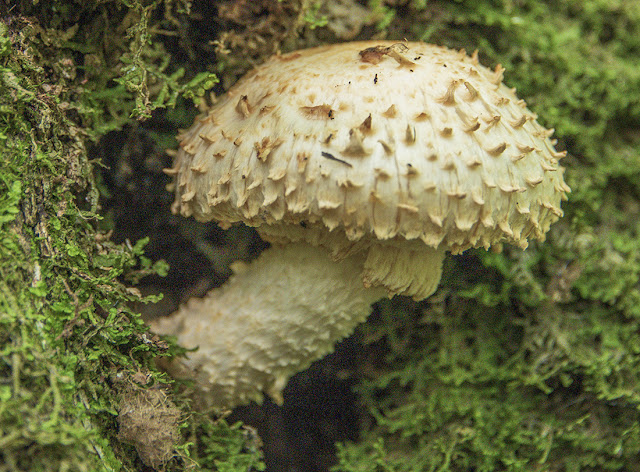 We noticed many interesting mushrooms. 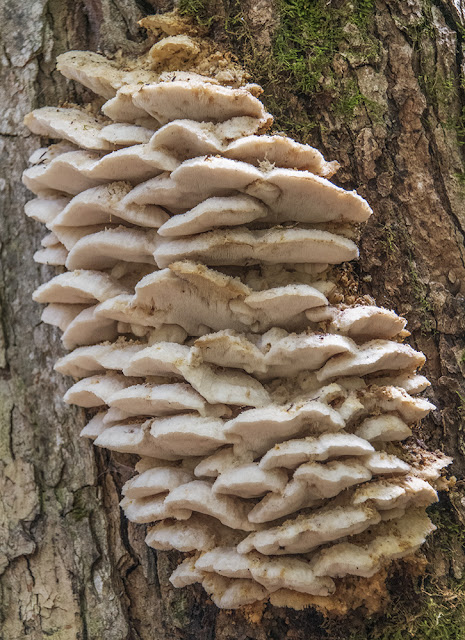 Craig remembered going mushroom hunting with his stepfather and step-grandmother when he was a kid. Of course neither of us has the kind of knowledge she had, so we left the mushrooms unharvested.

Part of my plan had been to swing over to Door County to see the trees changing color. Unfortunately, when I checked the "Wisconsin Fall Color Report" web site, I discovered they would not peak until the third week of October. We have many things we still need to do this fall and cannot stay in Northern Wisconsin until then this year. Maybe some future year... 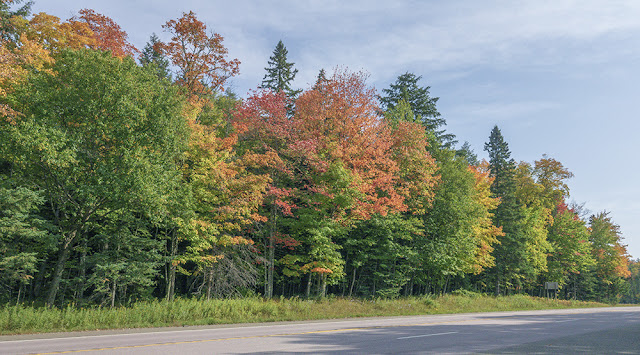 But we did get a small taste of fall color in the UP.

Earlier this month I contacted Karen and Steve to see if they would be home on the days after our time camping in the UP. They were, and we had a wonderful couple of days with them. The image below shows the wonderful old house that they are restoring and expanding. 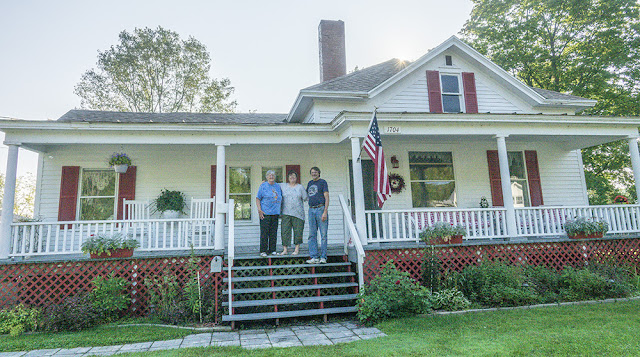 Too soon it was time to get rolling again. We are headed straight West to La Crosse, Wisconsin and then down the Great River Road along the Mississippi.

So much to see, so many places to go.