Good Weekend after all

Over the weekend I was thinking about the possibility of joining a caravan during our first month or two of full timing.  It seems like it would be a good way to get used to the RV life, and have some help if needed along the way.  There are caravans to Alaska and to Baja.  Both places I would like to see, but would be a bit afraid of going alone.

I mentioned the idea to Craig, and he didn't say no.

Of course, if and where we would go,  would depend on what time of year we actually sell the house and start the next chapter of our life.

A bit on the real time life saga:

I wasn't quite sure if I thought we were making progress on Saturday of this weekend.  In fact I was a bit unhappy, OK I was very Grouchy about how little was being accomplished.   Craig took Friday off to watch the World Cup games, but then when they were done for the day instead of coming out to join me, he got caught up in a computer program problem.  He did paint a little though.

On Saturday, he again watched soccer, and then worked on a rib rub recipe that he should have been able to finish while watching the games.  It's a long story ... but the ribs didn't turn out very well and I was pissy because I knew my old recipe would have been better.  He again didn't get out to paint until late in the afternoon.  It all sounds pretty trivial now, but at the time I was a real Bitch about it. 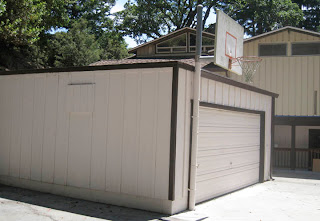 After a good night sleep I was better, and on Sunday I apologized for my grouchiness.

We both had a good day of work.  I prepped and painted the trim on the flat roofed garage.

The new paint color is not all that different from the old, but it is all so fresh and nice.

The trim in some places is very faded and dried out!  It is time! 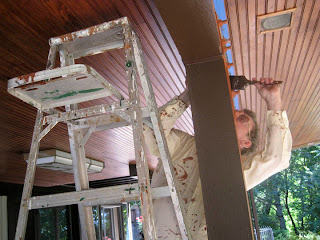 Craig did some hard to reach places.  (Notice the tongue in grove ceiling overhead.  We did that ourselves about ten years ago and are very proud of it.)

Monday, Craig started digging out the road side of the house.  We discussed hiring someone, but he decided to do it himself.

He should be able to get it finished next weekend.

A thought about painting in general:  Some of my friends have said they like to paint, some say they hate to paint.  In general I enjoy it about as much as any work around the house.  The house is like an old tired lady.  Faded and torn.  Giving her a nice fresh paint job is like giving her a bath, buying her a new dress, having her hair and makeup done.  A real exterior make over!