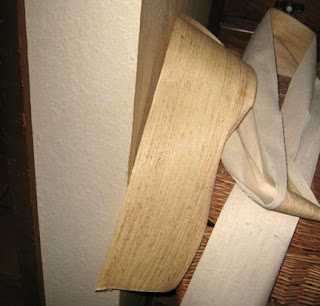 I decided which room to tackle next on Monday when I successfully peeled off the first piece of grass cloth wall paper in what is considered the master bedroom. We actually sleep in a different room. (It's another story.)  It took a bit of scratching at the bottom edge, but I found once started the dry paper came off in floor to ceiling strips.  A fuzzy paper layer remained on the wall. 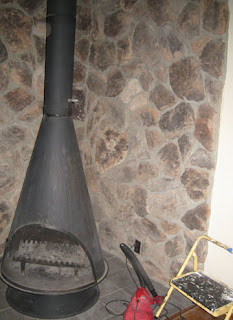 I knew that before I worked on the paper I wanted to clean the stone wall behind the little cone fireplace.  It was really ugly.  Over the years I have passed a webster over it a few times a year, but didn't do much else.  I started the cleaning process with a very thorough vacuuming with the soft brush attachment. 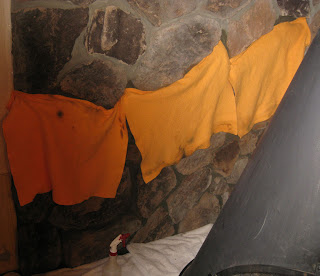 Next I washed the stones.  Starting at the bottom I used a spray bottle with 50% water and 50% vinegar to drench each stone.  By tucking Sham-wow cloths under each row, and towels on the floor,  I was able to catch the run off as I went.  I figure I used about two gallons of liquid.

It took two days to do, but it came out quite nice.  I will be cleaning and repainting the fireplace as well.  It's a rather retro feature, but can be quite pleasant. 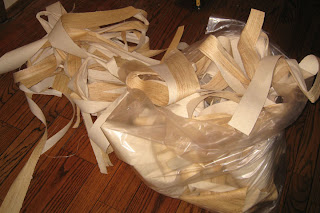 Then I started ripping off wall paper.

I  also  cleaned off the under layer of paper and glue with DIF, a scraper, and a three step wall washing process.

I've finished getting all the paper off and am about 1/3 of the way thru the removal of the under layer.

I'll probably be at it most of next week.

Tomorrow, Saturday, I going to preview a local monthly Flea Market.  It is said to be one of the better ones, with fewer really junky vendors.

You have to apply for a spot a month in advance.  I sent in the paper work for the first Saturday of April.  If I don't get a spot for then, I'll try again for May. But I want to take a look at what people are selling, their pricing, and their display methods.

It is supposed to be a quite nice day weather-wise.

Labels: Painting, Work on the house