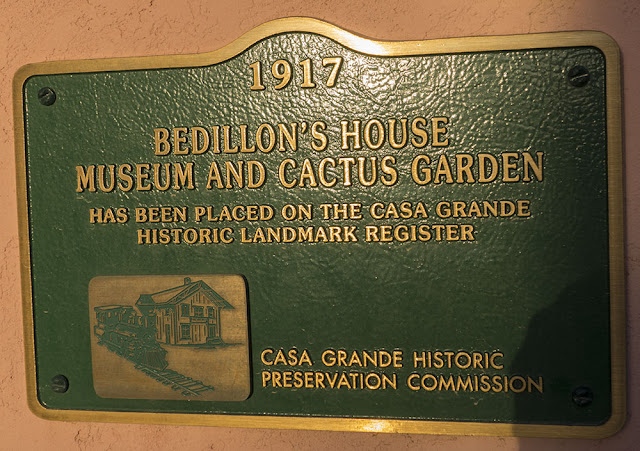 On Tuesday evening we went for dinner at the Bedillon House restaurant. The food was very good, and although it was a bit pricy, well worth it. If you are in Casa Grande Arizona and want an exceptionally good meal, this is a good place to consider.

In addition to an interestingly restored old house, it featured an extensive cactus garden. 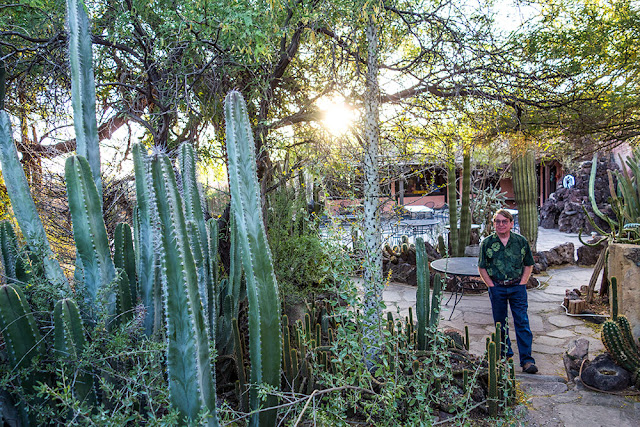 Craig choose the right shirt for visiting this garden.  He fit right in. 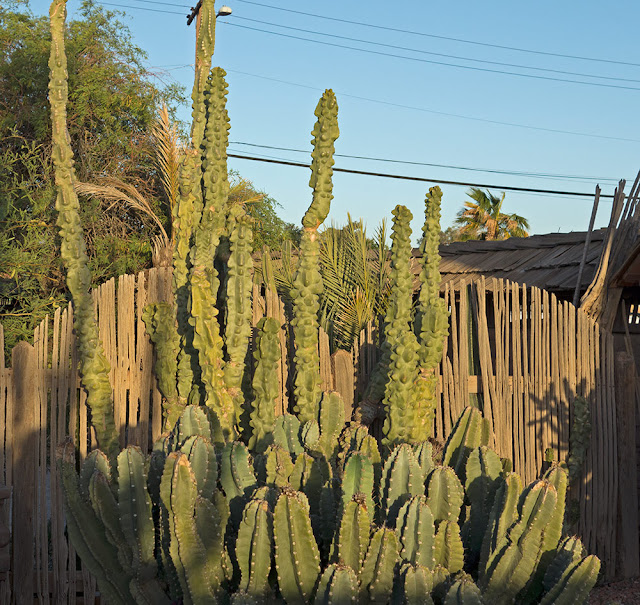 The early evening shadows made it hard to photograph much of the garden, but these plants were in good light for viewing.

Now on to Wednesday: it was windy!

We have had high winds for the last few days here in Casa Grande. We were lucky on our driving in days to have had calm weather, but find the blasting wind disturbing. Fortunately there is not a lot of dust in the air to blow, but when I went for a two and a half mile walk around the park this morning I had an extreme case of "leaky face". Tears kept pouring down my cheeks and my nose was running profusely. I hate when that happens! But walking felt good and I stopped to chat with a few of the winter residents that were out.

We had good luck this morning, we were able to get a mobile RV guy to come and look at the fridge. He was able to reset the failure indication.  Although the guy we had look at it yesterday and the Squeeky Clean crew both said their wash had nothing to do with the failure, the guy who fixed it today said the part had probably gotten wet. He knows the guys that did the wash, and said they were usually quit careful and watched out for such things, but this did happen from time to time. We were glad the fix was so simple.

During the day today, Craig and I went separate ways. I attended a very nice Alfa Ladies Lunch and then a two hour Microwave and Convection Cooking class. Craig went to an informative seminar about the battery-charging system given by Vonis Spencer, who is looked at by Alfa owners as almost a saint for the help he provides to others on the Alfa reoair forums. We both feel we learned useful things.

After four we again got together with other members of our club for a happy hour, and then at five thirty went to an outdoor BBQ sponsored by the Alfateers Repair Center. Most of us are their loyal customers, and the key people at Alfateers worked for Alfa before it closed down in 2008.

The BBQ was good, the music was good and so was the company, but we left early along with quite a few others because we were so cold and tired of the wind. I'm afraid I might be catching a cold and feel like a good night sleep may be what I need more than dancing.