I spent a couple of days this week getting some of Craig's things organized in the basement of the Alfa.  When we started putting things into it, I gave Craig a couple of big bins that I had used for storing art materials. I told him they were probably not the right size and shape, and that he should think about what he wanted.

Plastic bins were not high on Craig's list of things he wanted to think about. When it comes to tools he has always had the "leave it on the workbench" philosophy.  His usual way of finding what he needs is to ask me to look for it.  He has gotten better over the years as I became more and more reluctant to be his "gofer", but his first words about almost any project are: "Merikay, please go get the ..."

The other day he said the two bins he was using had too many things in them and could I move some of it to another container.

Aha!  I knew if I imposed some sort of system on him he would ignore it, but since he asked I went right to work.

First I measured the space I wanted to use and the existing boxes in it.  Then I went out to shop, stopping at Home Depot, The Container Store, Walmart, and Staples.  I found I had several options.  The best was from Staples.  Several same sized, handled,  stackable, click-close bins available in different colors.

I bought them and spent Monday sorting things out. 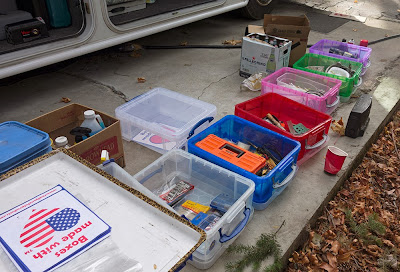 Three of these stacked up takes the same amount of floor space as one of the larger ones. 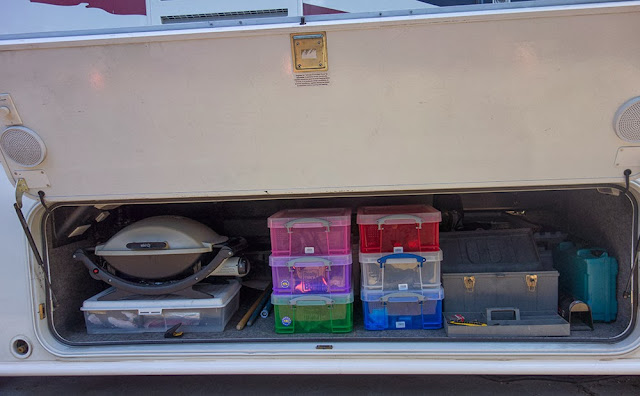 The empty larger ones are still behind these, or in the other bay, along with a couple of other empty smaller colored ones. Hopefully he will be able to put things back into the correct container.  I have also made notes of what each color contains, so when he asks me where something is I can tell him to look in the designated color bin. We will see how long this lasts!

I have also reorganized a couple of the kitchen cabinets this week. Amazing how a little organization can yield more room and easier access!

Can you tell I have too much time on my hands?