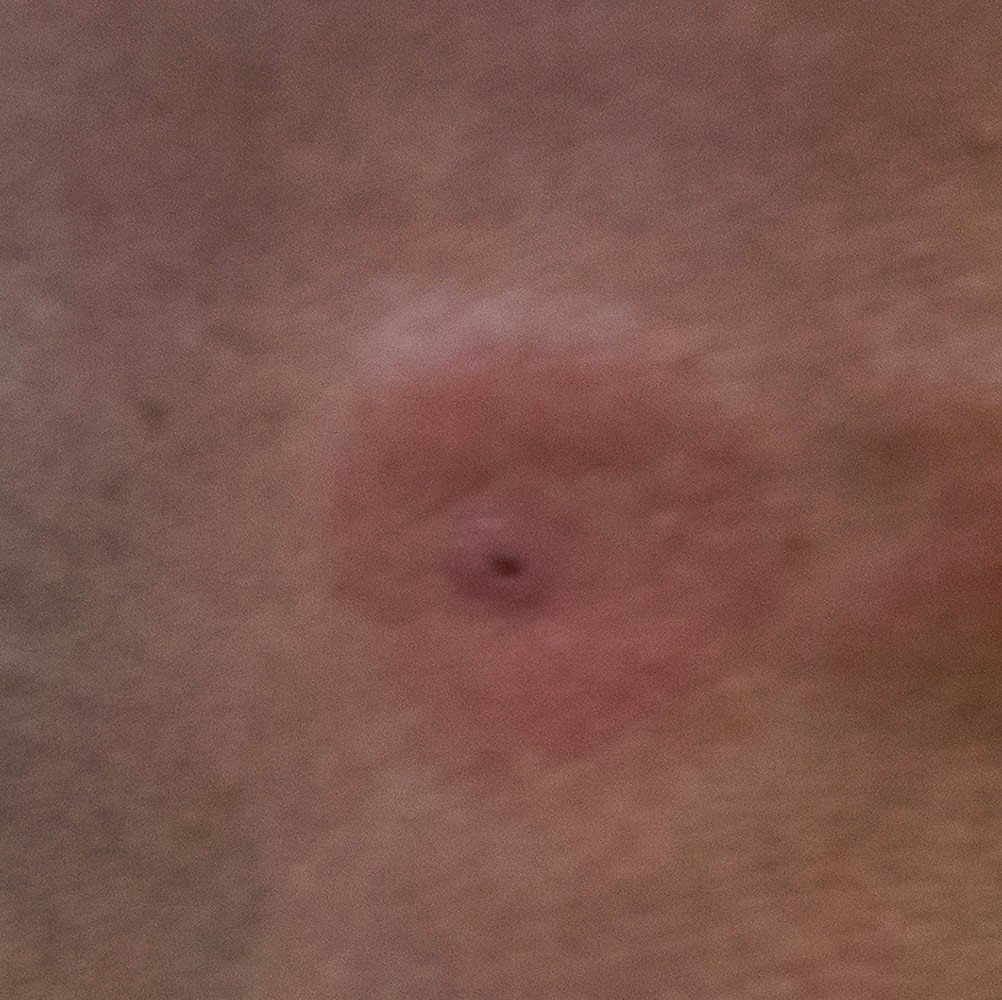 Sunday night Craig noticed a round raised area around where he had removed a tick from the back of my leg a few days before.

I couldn't see it, so he took a picture of it for me.

We had heard the term "bullseye" used in reference to Lyme's Disease, and although this did not really look like the pictures I had seen on the web, I thought I should have it checked out anyway.

Monday morning at an urgent care center in a resort area is a bit of a zoo in itself!  A lady with a sprained ankle, a couple of kids looking like they had a flu, a girl with an ear ache, a teen age boy with an ice pack on his arm, and several others, including me.

I appreciate the urgent care system, it being a lot better than waiting for hours in an ER if you don't have a local doctor, but I feel sorry for people who either do not have insurance or who are out of the area for their HMO.  I was sitting close enough to the clerk taking check-in information to overhear her telling the lady with the sprained or broken ankle she needed to pay a minimum of $200 to be seen, and that the bill would go much higher if she needed x-rays or a cast.

I am quite glad we have a supplemental insurance that we can take anywhere.  The monthly premium costs more than an HMO, but I had no co-pay, and will get no bill for my visit.

The good news was that because we had seen the tick, and knew it was a big one, thus a dog tick and not a deer tick, there was no possibility for it to have transmitted Lyme's.  The Physician's Assistant said it looked like a bit of the tick head might still be there, but it was not a good idea to try to remove it at this point. The raised red are was an allergic reaction, and suggested taking some Benadryl that evening if the itching bothered me.  He did give me a written antibiotic prescription  but said I should only fill and use it if I thought the area was becoming infected.  Hot or pus-filled. It has not, and after one dose of Benadryl it doesn't itch anymore either.

I'm glad I had it looked at, and very glad it was not a typical Lyme's bullseye. 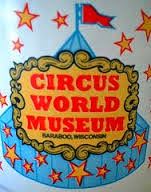 Our afternoon was much more fun.  We went to the Circus World Museum in Baraboo Wisconsin.

We both went to the circus several times as kids, and in Milwaukee there was a fabulous circus parade every year in July from the 60's thru 2006. They would bring down many of the fancy wagons on the train. By then the actual circus was a separate business.

I remember going down to watch the unloading which was done with horses. We learned the parade just became too expensive to continue as a free public event, and was discontinued after '06.   What a loss!

The Circus World Museum is owned and run by the Wisconsin Historical Society. It is on land that was the original home of the Ringling Brothers circus, which was started there in 1884.

The museum is both indoors and outdoors. We wandered through it and read some very interesting exhibits about the Ringling Brothers and the circus business as it evolved in the late 1800's through the mid 1900's. I guess as kids we were just catching the end of the good years!  Although, when my grandson was little I went with him and his mother to the circus in San Diego, and I know the circus still comes to the big cities every year.

On the museum grounds there was an exhibit of original railroad cars used by the circus. 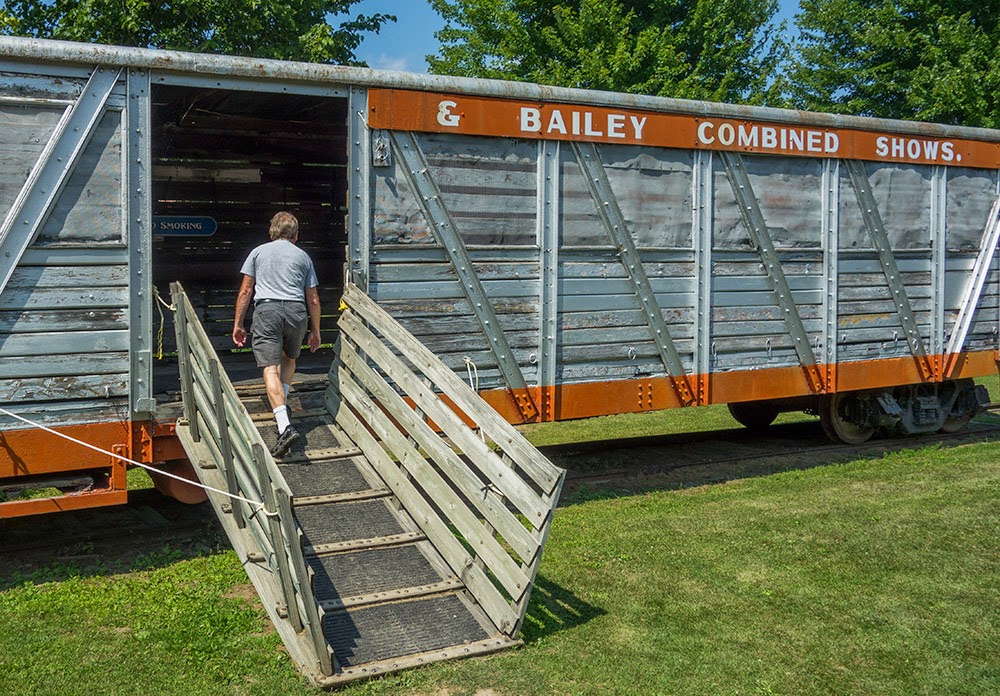 One of them was the horse car used in the movie "Water for Elephants". 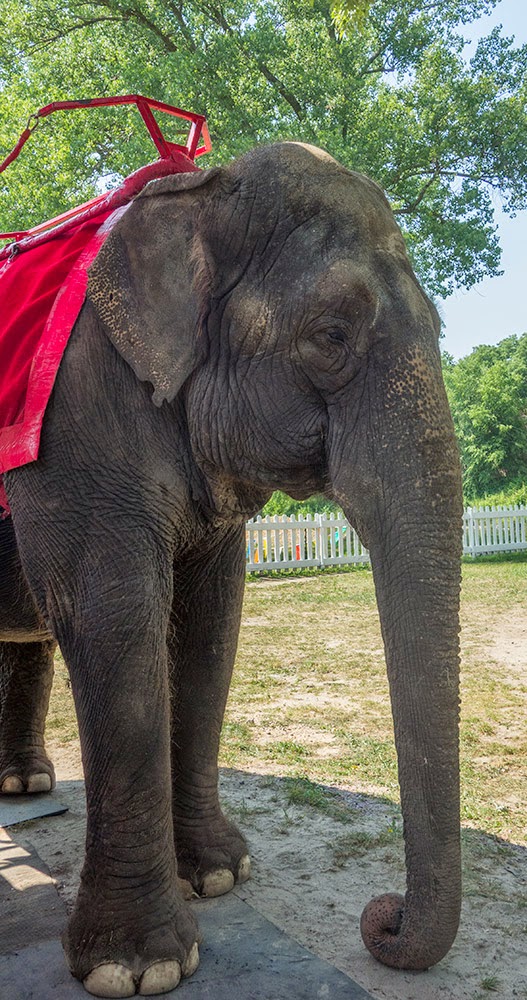 Speaking of elephants, there were two on the grounds. For $10 per person you could ride this one slowly around a large circle. She did not seem abused or unhappy and we were able to see the large shaded area where she and the her companion spent their time when not working. No chains.

As part of our admission there was a schedule of small shows to see. We saw a  clown act, a side show (with statues of past characters such as Tom Thumb, a fat lady, and Siamese Twins), a magic show, and an abbreviated version of a one ring big top with several acts. 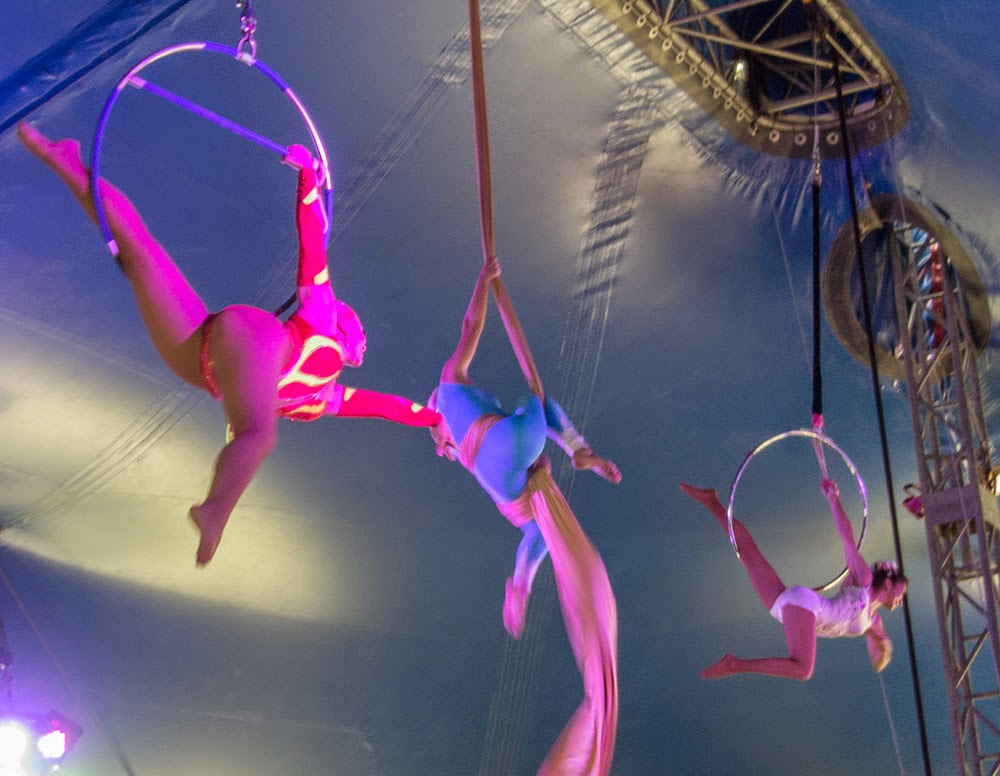 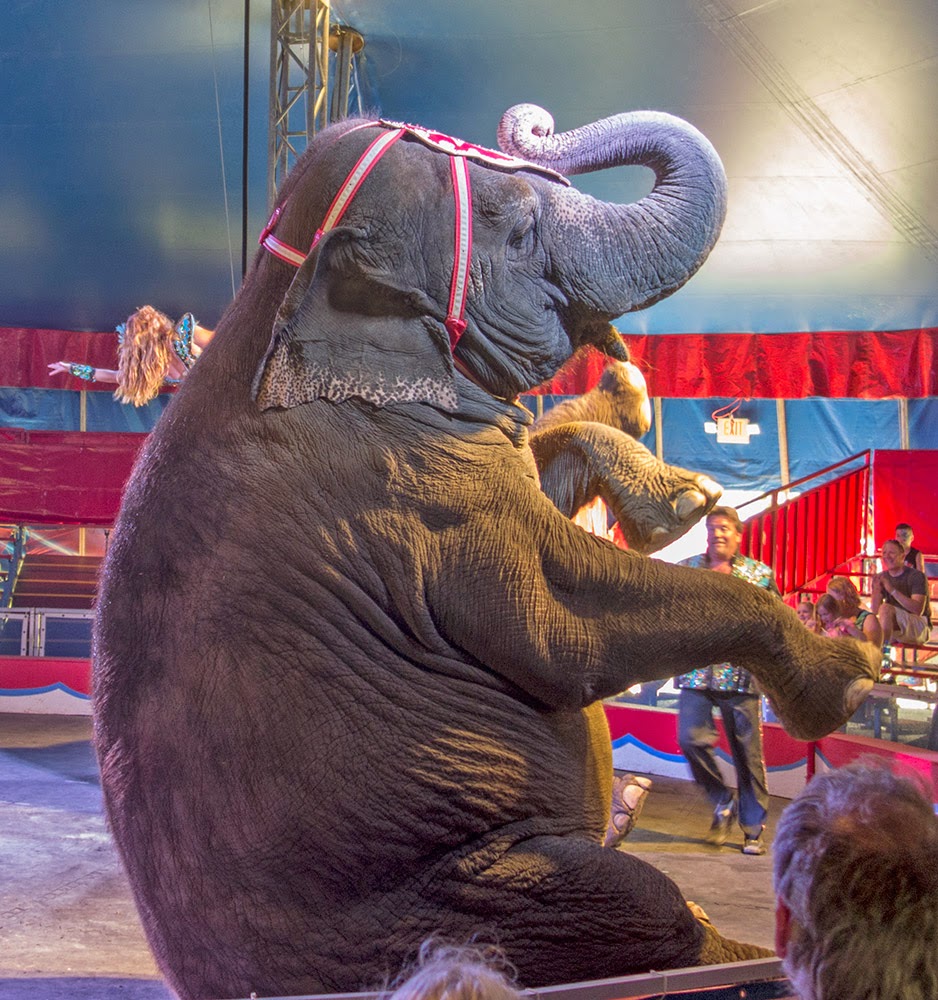 And of course the elephants doing typical elephant tricks.

After the shows we really enjoyed walking among the large collection of fully restored wagons from European and American circuses. I remembered many of them from the Milwaukee parades when they were pulled by beautiful teams of horses. 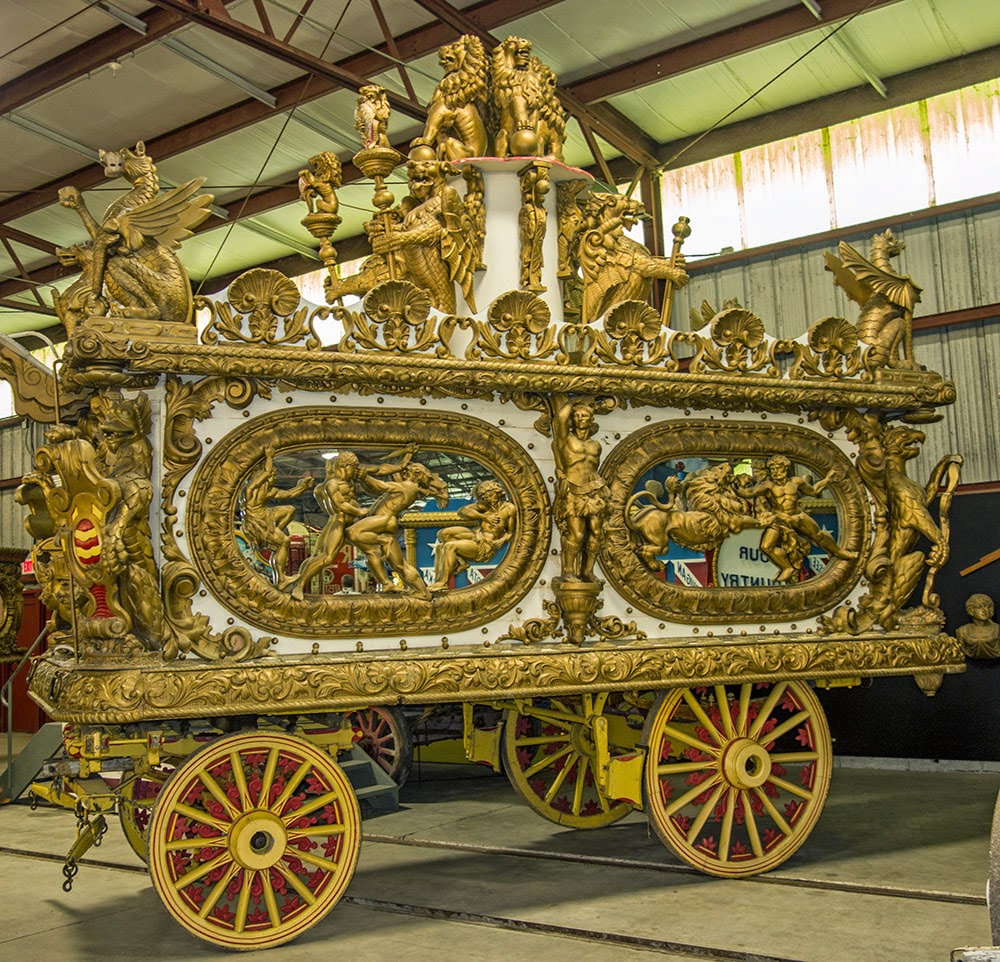 This was one of the more elaborate wagons. The top section was lowered down inside for travel, and raised for parades. Can you imagine how exciting and magical it would appear to the farm country children of the early 1900's?

As an RVer I found this one particularly interesting.  It was the living wagon for an owner or manager. It was on a wagon base, but could also be loaded on a train. Weight must not have been an issue, because it had a big cast iron  stove, a heavy wood bunk bed and a very sturdy table and chairs. I was amused by the overhead light oak cabinets that you can see thru the door.  They look just about the same size and shape as in many modern rigs, including ours!

I also noted it is white, just like our Alfa.

I enjoyed our time there because it was looking back into a past I understood. There were some families with children there. They seemed to be enjoying themselves even if it was not a "hands on, push all the buttons, and watch the video" kind of museum that seem to be what children's museums are like now.

Am I old or what?