[From Craig]  Monday night we were sitting with our hosts/neighbors Karen and Al talking about things to do in Georgia.  We said we might want to go see Amicalola Falls, which someone told us was the tallest waterfall in Georgia.  Karen warned us that it involved many stairs.  That sat in our minds overnight, and Merikay and I both woke up in an adventurous mood Tuesday and decided we wanted to go there.

It was almost 50 miles from our camp south of Blairsville, and we got to the Amicalola Falls state park in the middle of the morning.  The Georgia Parks year pass that we bought a week ago got us in for free, and we stopped at the Visitor Center.  The ranger lady told Merikay that the trail along the falls included 604 stair-steps.  Karen had prepared us for this, and we decided to go for it.

They told us about the stairs, but didn't mention the rather steep 0.3 mile path leading to them.  Merikay didn't like the slope at all, and I didn't care for it much either.

We were about to return to the VC and ask for our money back, but remembered that we hadn't paid any.  Just about this time we got to the first of the stairs. 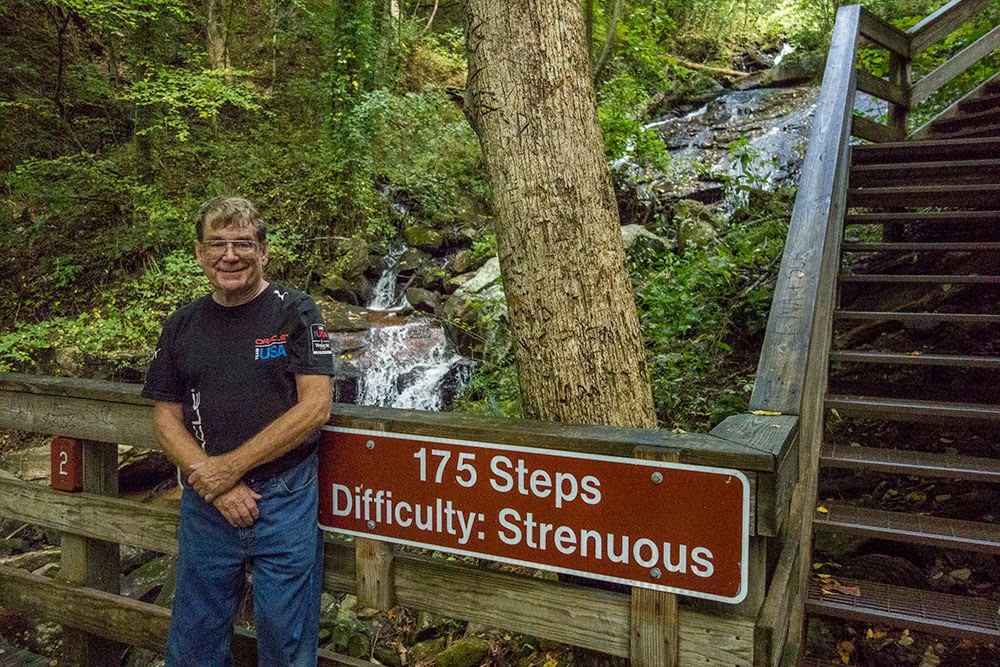 The nice part was that all the stairs were identical and all were the standard height (7 inches).  So there was nothing to do but start climbing.  We stopped at each conveniently-spaced lookout platform and went on only when we were both good and ready.

About waterfall comparisons and claims: Amicalola literature says it's the "highest waterfall east of the Mississippi".  Sites like Wikipedia and Infoplease use "highest" and "tallest" interchangeably, so we don't have to consider small waterfalls near the top of Mount Everest.  The facts about Amicalola are "729 feet in seven cascades".  That would be just high enough to make the Infoplease list, but Amicalola doesn't appear.  Probably they only count height in a single cascade... 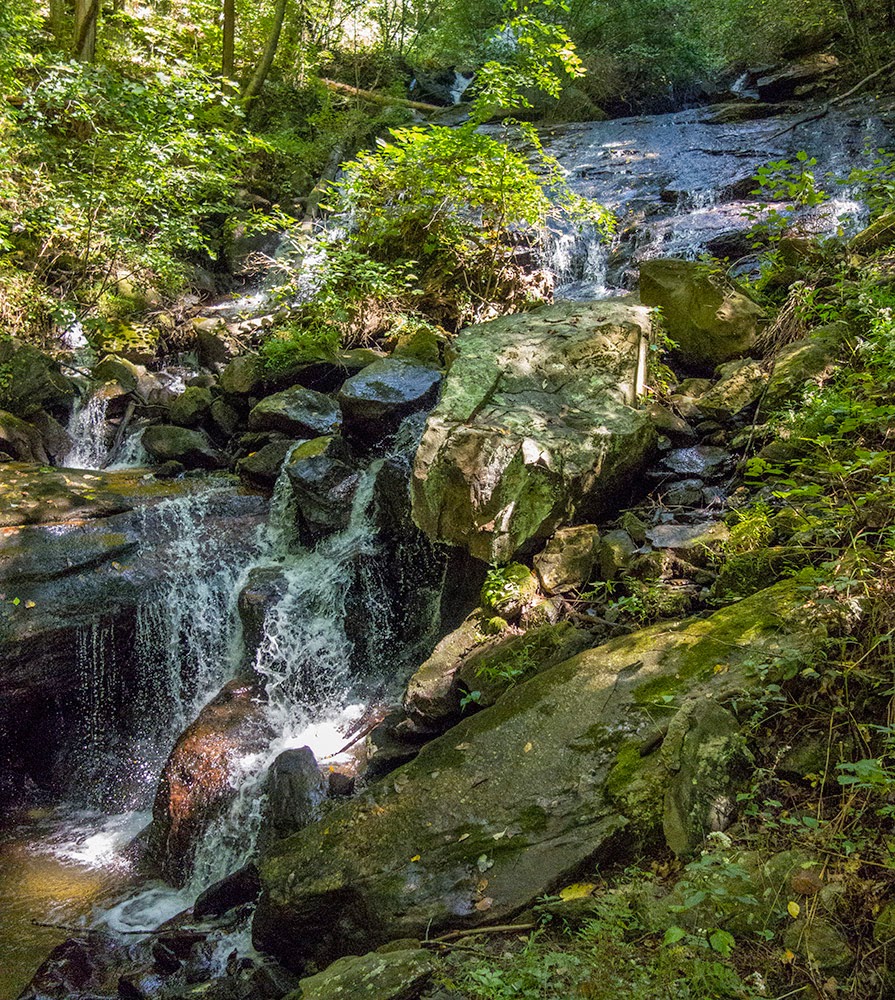 Anyway, the cascading waterfall is off to the left as you ascend this first stair complex.  (Don't forget you can click on images to see them larger.) 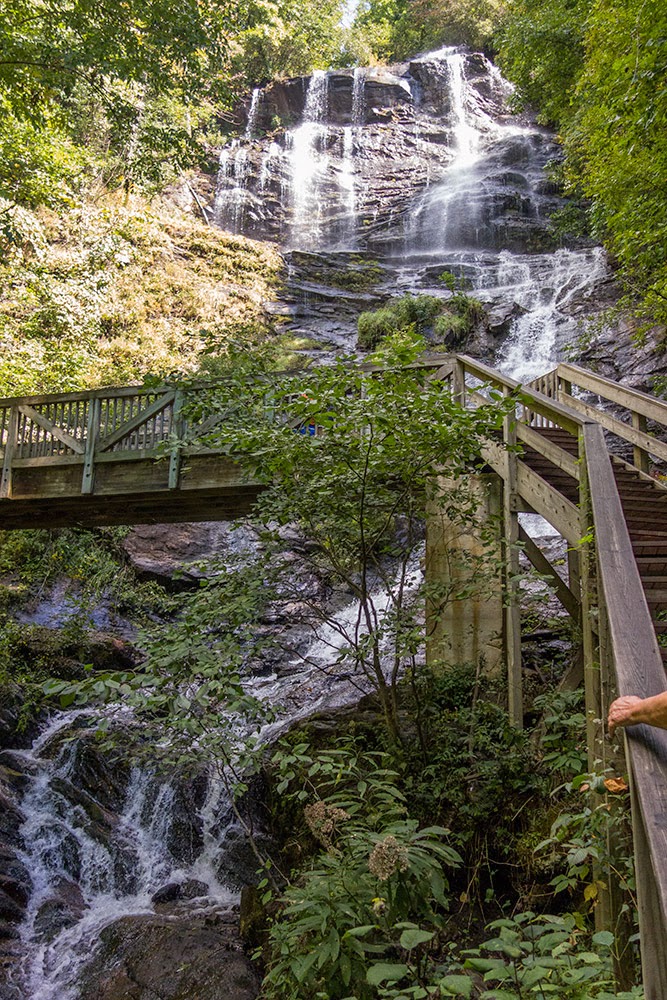 At the end of the first 175 steps is a crossover bridge to the other side of the stream.  This offers the best view of the falls anywhere along the trail. 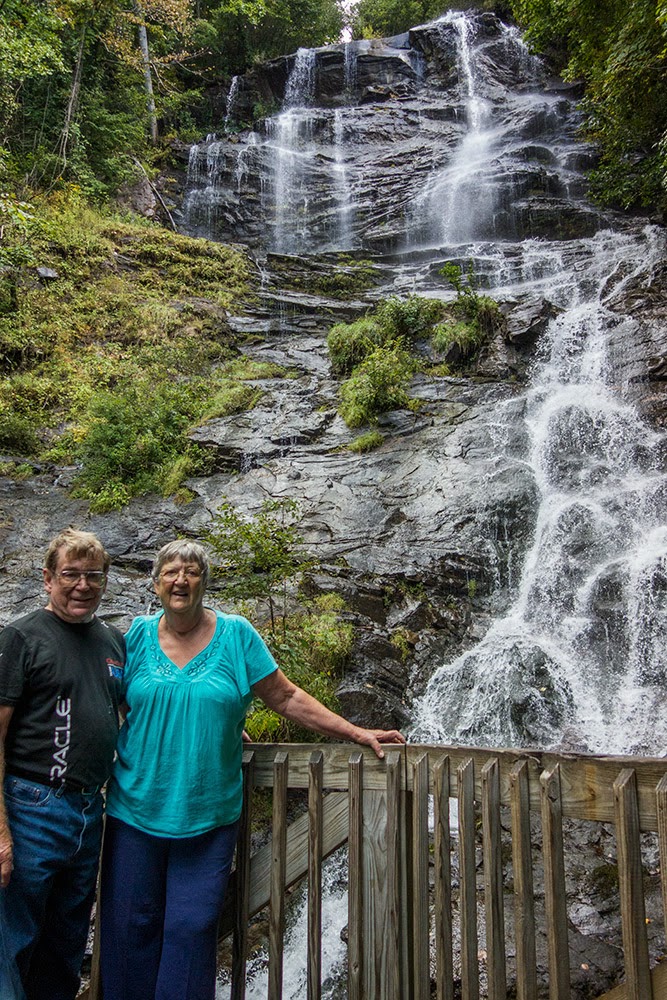 On the crossover bridge, a young lady asked if I would take a picture of her and her friend using her phone.  Of course I said yes, and then she insisted on returning the favor.  So here we are in front of the falls.

After crossing to the left side of the falls/stream, we came upon this friendly little sign.  Of course we expected it, but still... 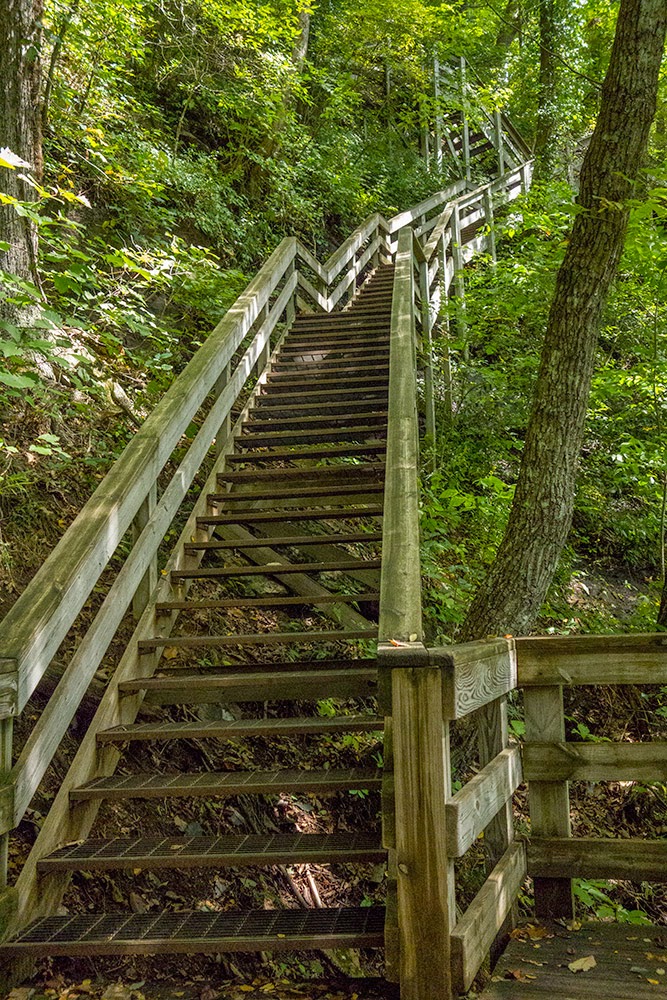 I knew Merikay was concerned about getting up this stair, and I tried to say nothing but positive things.  Again, there were frequent rest platforms. 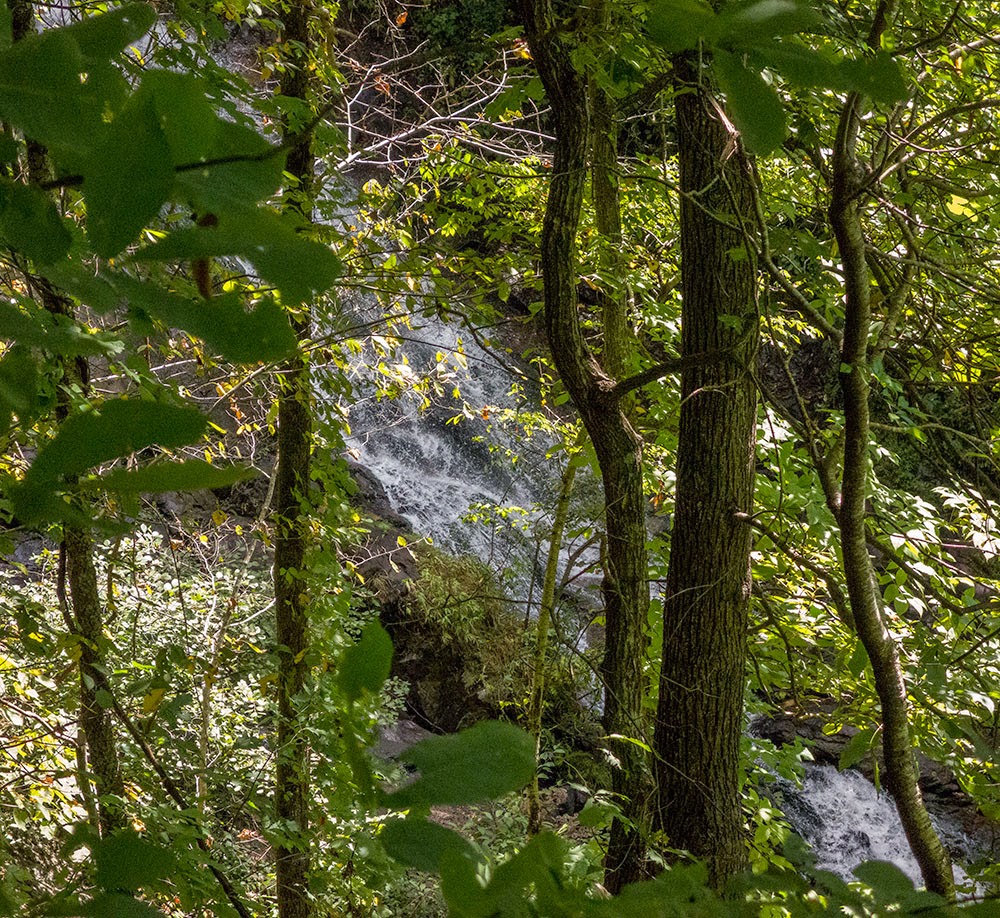 The view of the falls was not as good in this upper portion as it had been in the lower.

This is the view looking down from the top of the falls.  It's harder to see than the views from below, but it's still a nice bunch of bouncing water!  Someone tossed a red flower on the left side.  If they wanted it to go down, they didn't succeed. 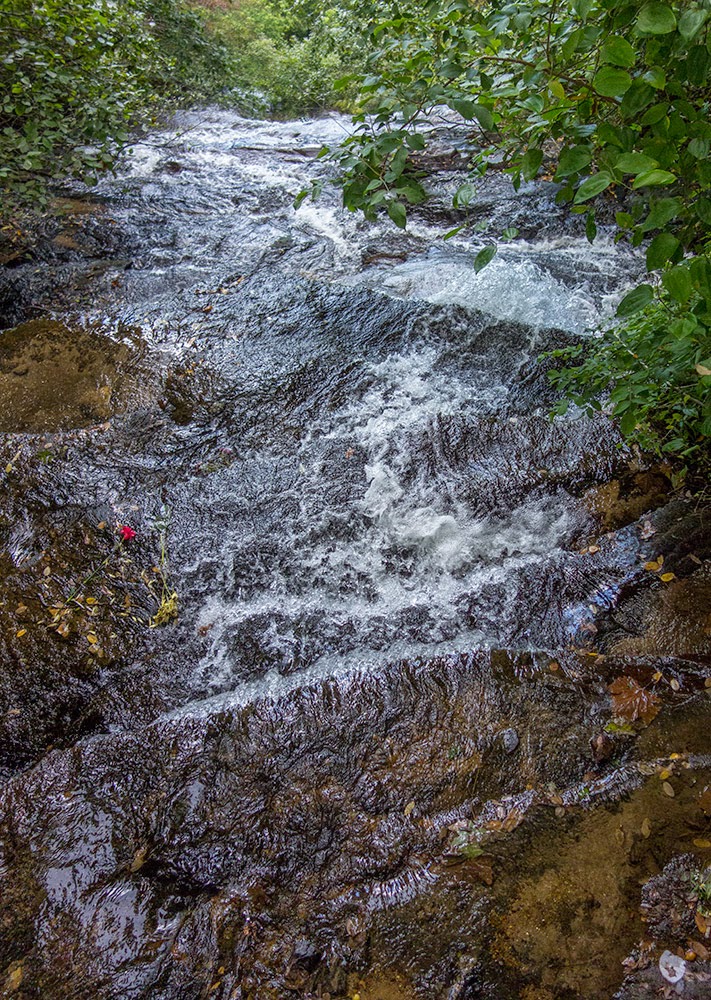 We wandered around at the top for a while.  People who don't want to climb 35 floors of stairs can drive up to the top and then walk down.  We met several such folks.

Then came the climb down. 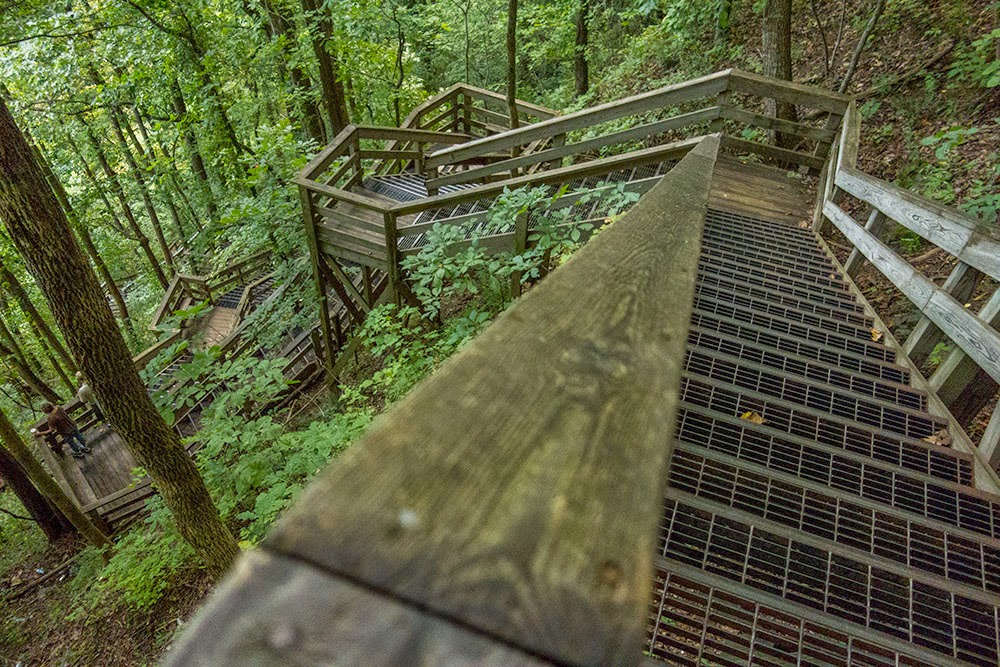 In this direction we offered advice and encouragement to travelers in both directions.  Success was so good for our spirit!

We made it down to the bottom and fetched our lunch from the Jeep.  After lunch we revisited the Visitor Center.  Merikay almost bought this but realized that the shirt would long outlast her feeling of achievement. 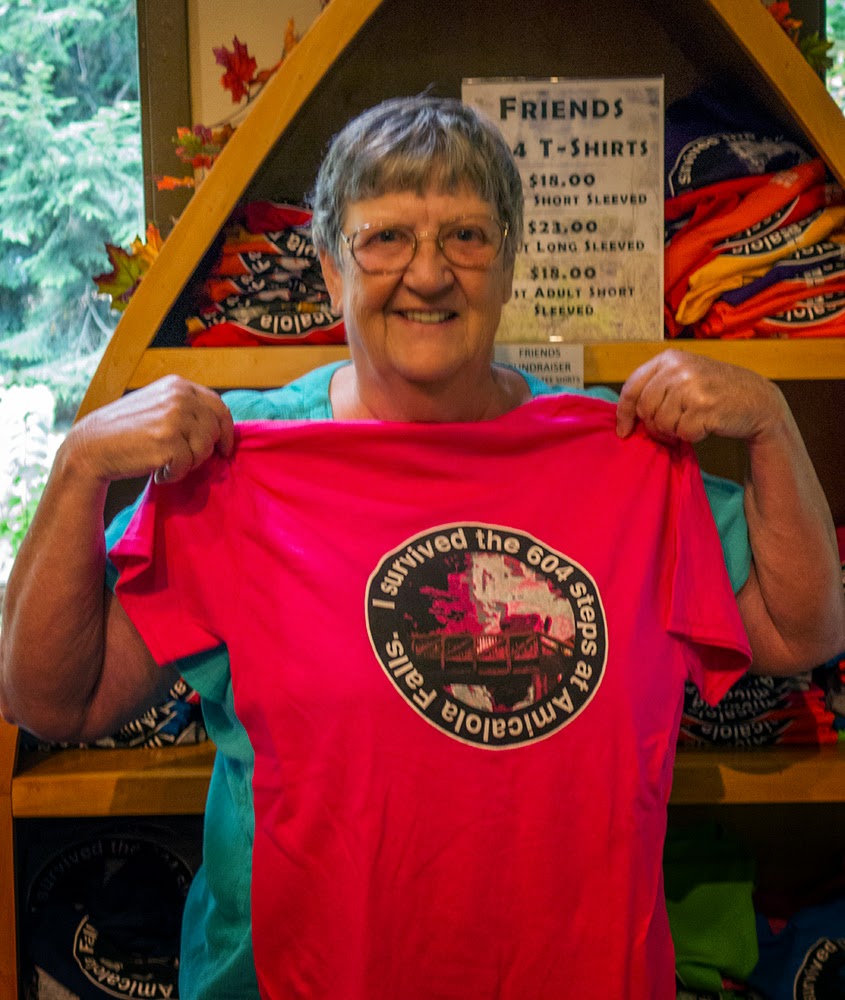 I may sneak back to this VC before we leave North Georgia and buy her this owl.  Feels pretty appropriate for a retired wildlife artist... 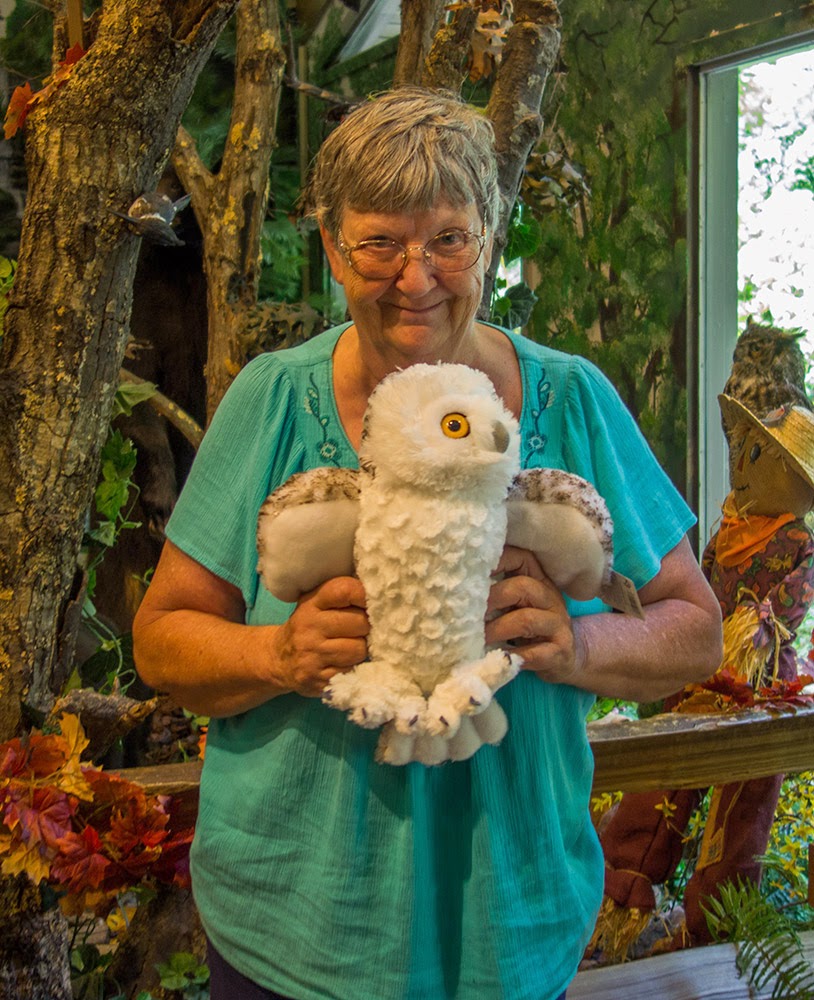 From Merikay: I asked Craig to write the post for this hike because I was a bit tired. I feel I am getting back into shape however. About the shirt and owl, I love looking at the things in the park gift shops, but exercise restraint. Otherwise our coach would be full of stuffed toys.  "Take nothing except pictures", just like the forest. Also it helps the budget numbers.

Due to operator error, this post was published about an hour after the previous one.  So please read on below...
Posted by Merikay at 6:36 AM