[From Craig] Tuesday was an active day for us. We drove 366 miles (leap journey :-) from Medora, ND to Custer, SD with a stop at Devil's Tower, WY (tri-state leap journey) and a walk around the famous rock.

Native Americans (f.k.a. American Indians) have made pilgrimages to this place since 7000 BC. At the start of the trail around the tower, there was a sign asking us not to disturb any prayer blankets and prayer bundles we saw. Of late, our First Folk have been agitating to change the name from Devil's Tower to Bear Lodge.

It turns out that the name "Devil's Tower" was the result of some bad translation anyway. An incompetent translator in an 1875 expedition mistook one of the Indian names for the place to mean "Bad God's Tower" which, filtered through Christian mythology, turned into "Devil's Tower". But the case for "Bear Lodge" was to my mind weakened by a sign in the Visitor Center that showed nine different names, translations from different tribal languages. Admittedly, seven of the nine names included "bear".

The path around the rock had numerous game tracks in yellow paint crossing it. Nature Lady Merikay said most of them looked like bear tracks. I wonder how they trick the bears into walking through yellow paint before they cross the path :-)

Many European Americans and overseas visitors have visited the tower since 1977 AD, when it was featured in the science-fiction movie Close Encounters of the Third Kind. It's been since that year that we saw the film, but the hero was being prevented from contacting the (good) aliens by the US government.

The aliens sent him dreams about Devil's Tower, where they wanted to meet non-government humans. He had no conscious recollection of the dreams until one evening when he sculpted the tower using his mashed potatoes. In person the tower gives an impression of immense mass and strength that is about as different from mashed potatoes as anything I've ever seen!

OK seriously, European Americans and overseas visitors have probably slowly increased in number since the previously mentioned 1875 expedition. In 1906, in part due to the advocacy of Teddy Roosevelt, it was made the first US National Monument.

We hiked around the tower as quickly as we could, given the number of pictures I took. The first (and thus main) photo opportunity spot had a long line, so we took this shot a little further around the trail: 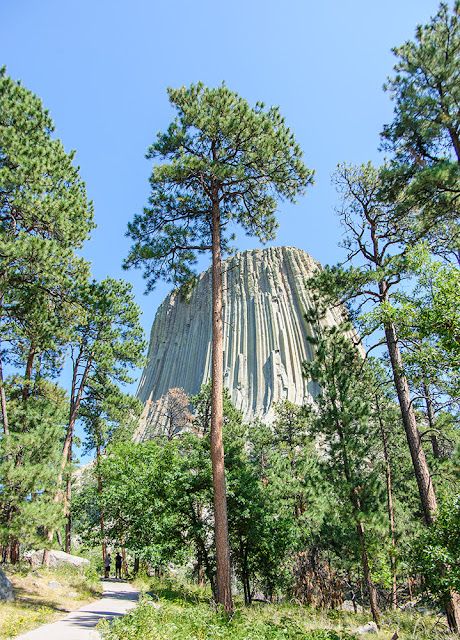 Geologists have several opinions about exactly how the tower formed, but they agree that it's made of igneous-rock lava that burst up through sedimentary layers hundreds of millions of years ago. It didn't reach the surface at the time, but made a domelike bulge in the landscape. The lava cooled in ways that made it crack into columns, most of them having 6 sides as you can see above. The tower was only revealed when rains and rivers (like the nearby Belle Fourche river) eroded the soil and softer rocks away.

A little further around the trail, keen-eyed people showed us a small group of climbers who were climbing the tower. Through the magic of a 300 mm zoom lens and digital cropping, you can see two of them in the right image below. Near the top like this, the columns are less perfectly hexagonal. 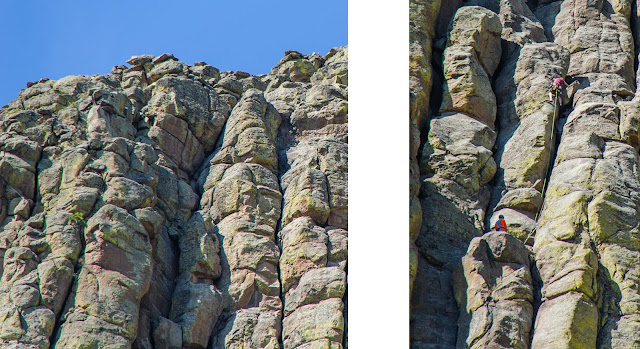 Since the tower has been exposed for many millions of years, pieces have been falling off of it for that long. Some sides have larger "debris fields" than others. Here's Merikay in front of one of the largest fields of fallen rocks: 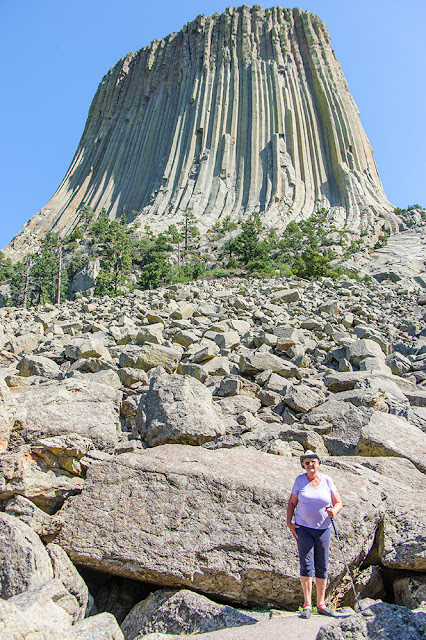 About a quarter of the way around, the lower parts of the tower changed to less-vertical columns: 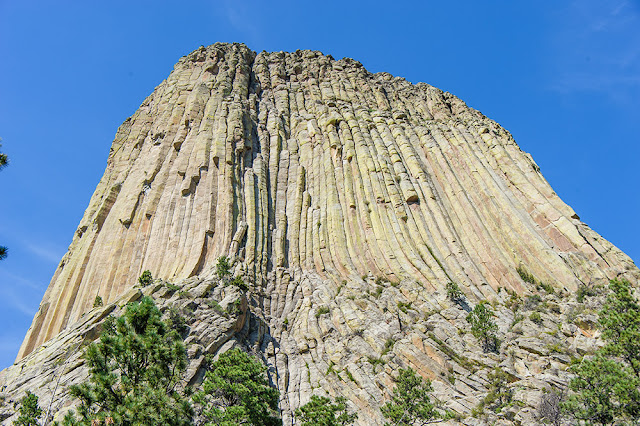 Nearing halfway around, the columns change to more normal-looking rock, and develop some holes (caves?) that look large enough to live in, if you could get water and food up there: 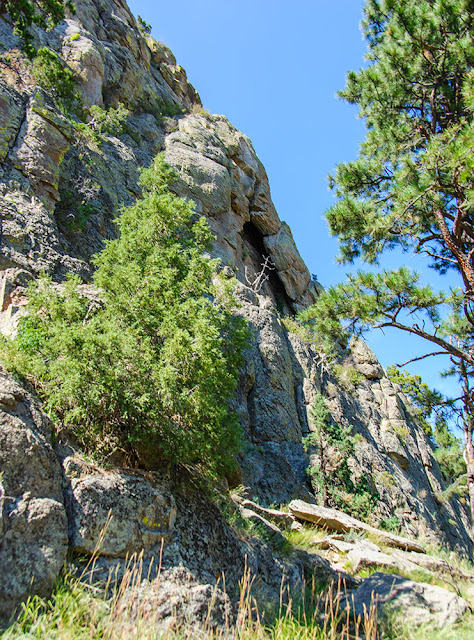 This sign helps people know which way is the shorter, back to the parking lot: 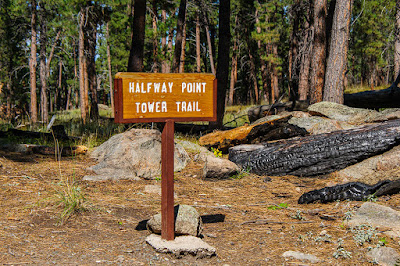 Two thirds of the way around we came into the shadow of the tower. The distance to the tower, its height and the angle of the sun enabled a 3 PM "sunrise" as we came out of the shadow: 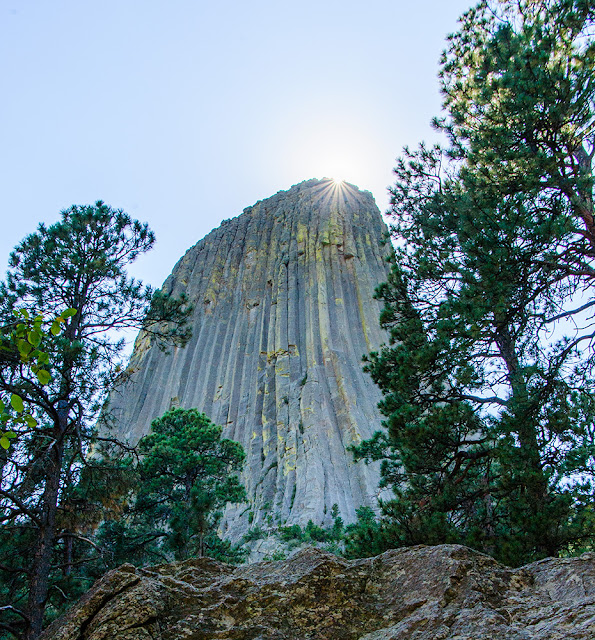 An hour and 45 minutes after starting the trail, we're back to the rig and ready to drive the 100 miles to Custer State Park. 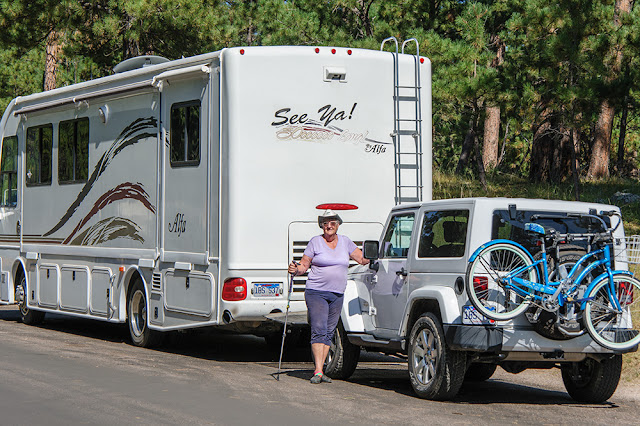 The end came in time for the camp hosts to help us to our spot. 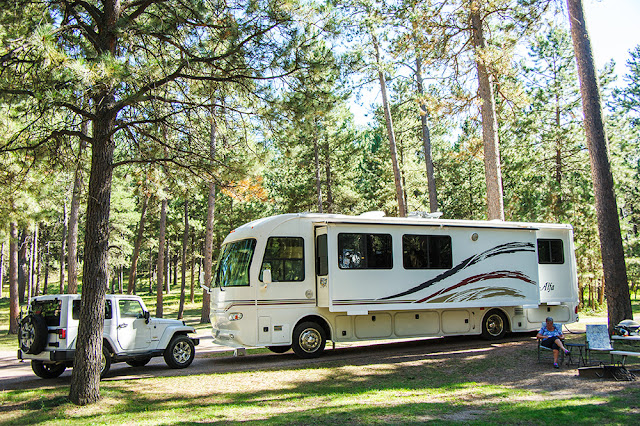