Thoughts about Full Time Life, and going to Nova Scotia

This post is being published from a Tim Horton's Coffee Shop. Great coffee, good donuts, and free Wifi.  Yay Canada!

We took the ferry over to Nova Scotia from Prince Edward Island on Thursday, and then drove almost 200 miles to a campground in Baddeck, NS.  The day was long, but we managed with few difficulties. 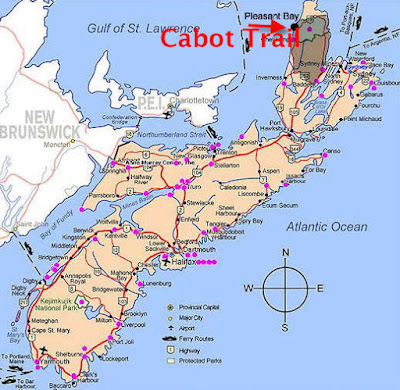 Our Friday adventure was to drive the 186km loop called the Cabot Trail. Although there were long stretches of just forest or farmland on both sides of the road, the vista points overlooking the rugged coastline were breathtaking.


The pictures in this post are from our drive around the loop. They speak for themselves.

Recently someone commented on how far we had come since the beginning of my blog. Not just in distance, but in experiences, and they suggested I write about how we felt about it all.

Well, in a nutshell, we both are very happy that we made this choice in our lives. It is coming up on three years since we put the house on the market and moved into the Alfa. I for one have never regretted that move, and I don’t think Craig has either.

Has everything always been wonderful? No. But then who can say that about a three year period in their lives? All I can say is that we have had ten times more good days than bad. The technical problems and trip planning have stimulated our minds in a way no house-bound retirement existence could. (Occasional grinding noises.)  We have both discovered much about material things that we don’t need, but at the same time how important small personal touches can be.


Home is where you park it!  When the slides go out and the levelers go down, we are home. We like having our own familiar bed each night, and being able to cook most of our own meals in our own kitchen.

Our marriage? Nothing is perfect. We are not perfect. I would say that living in an RV, 100% of the time, concentrates everything. We are both far more aware of the other's moods and feelings. Although we may be quicker to get pissed about something, the anger dies down much faster than if we had more space. Who would have thought that after fifty years we would both have to still work at it? But we do, and so far it is working more often than not. I’m happy when he is happy, and he is happy when I’m happy. What more can you ask from life?

A funny thing happened to me at a gas station in Whycocomagh, NS: Craig was driving the Alfa, and as is our routine, I hopped out when he pulled into the station to verify where the diesel pump was and to guide him in.  There were other cars at the pump, so I was just waiting our turn when gentleman in a red shirt, who was filling up at the other side of the pump island, said: “I’m glad you enjoyed the Hopewell Rocks.”  What? Who was he? I quickly ran through my memory of people I had met in recent parks and at the Rocks, and came up empty. I did not recognize him, so I asked: “Who are you?”

Have you met friends you have never met before?