Canyonlands and Monument Valley from the Air

We were in the Moab, UT area in 2015, and enjoyed seeing Arches National Park from the car and on foot. This time we decided to take a scenic tour by air. 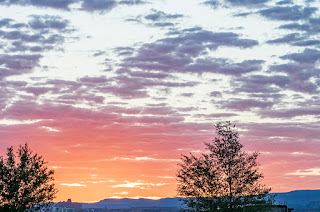 We took off at 8 AM, not long after a beautiful Utah sunrise. 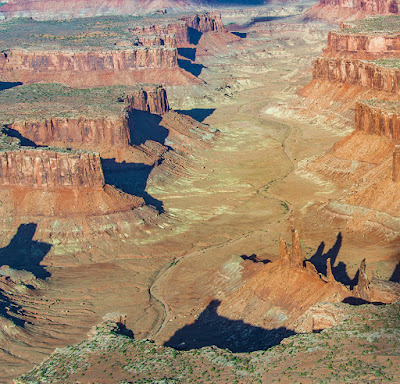 The cliffs cast remarkable shadows in the morning light.

Viewing the canyons from above was amazing. 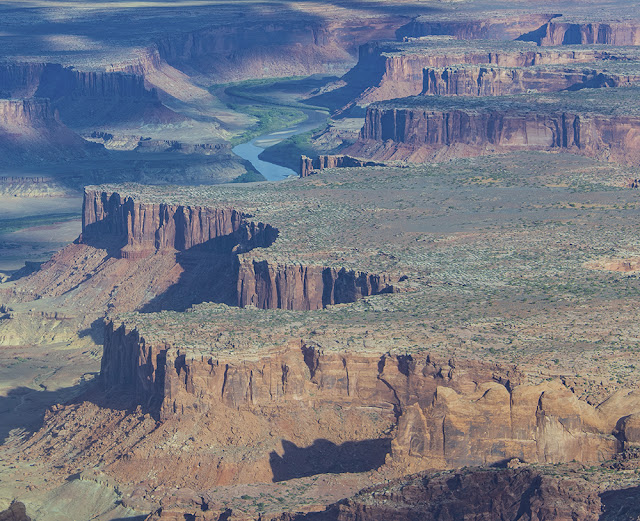 The shadows cast by the clouds gave an ever changing light and dark pattern to the landscape below, and the plexiglass windows of the four seater Cessna softened the focus of our images. 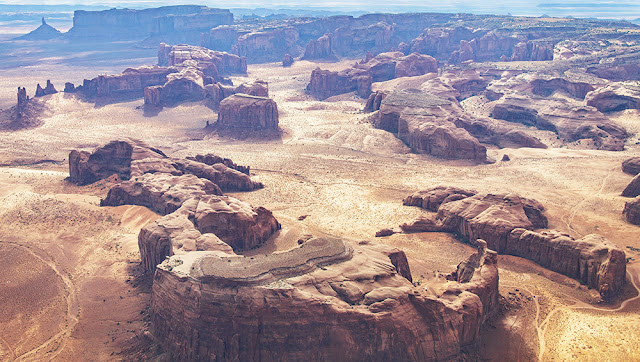 Some places were barren and felt like they could have been on another planet. 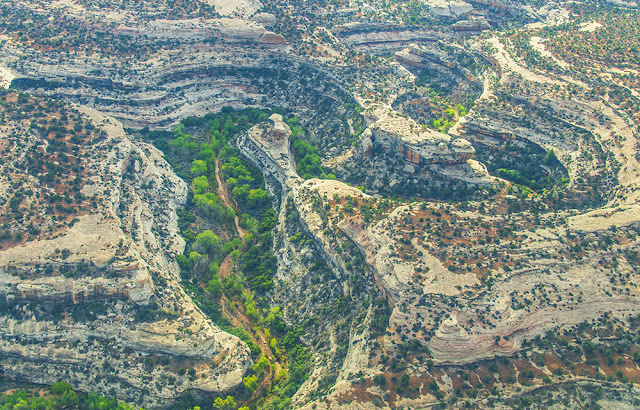 Others were vibrant with life.

We flew over several rivers. Their deep meanders seemed endless. 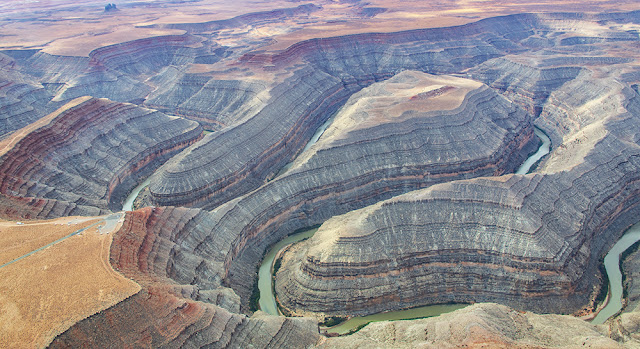 In one of these loops the river flows almost eight miles to go two. 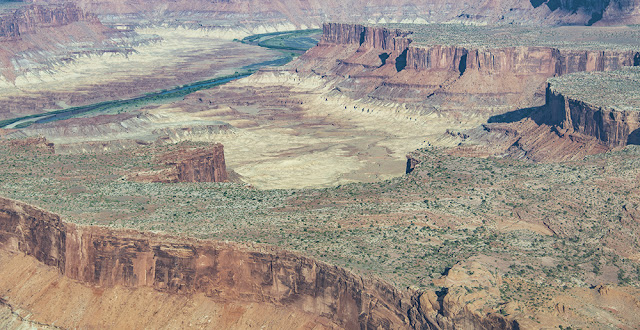 We saw many different colors. There were several types of sandstone, ranging from light gold to deep rust red, and areas of white crust/layers that were ancient salt deposits.

After Canyonlands. our flight tooks us over and around Monument Valley and the Valley of the Gods. 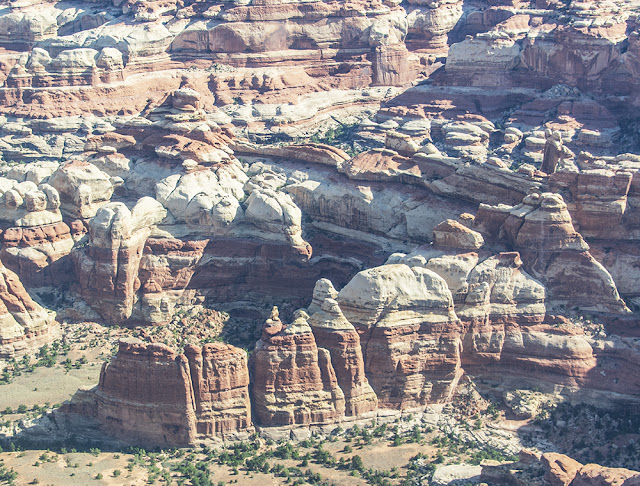 We passed over many canyons and areas that cannot be seen except by air or by very very serious backpackers.

We took a lot more pictures, each showing interesting and unique views. It was hard to select those that I included above.  ⬇️

[From Craig] Merikay sat in the front passenger seat, while I got the back seat, from which I could shoot to both sides with less interference from the wing struts.  So I got to take 90% of the pictures.

We flew over several meandering canyons, some of which contain arches that very few people see. We didn't see any arches in the one below, but it includes a question. You can see a meandering track in the center and right sections, but it's red like a trail. Merikay thinks it's a dry creek bed. Which do you think it is? 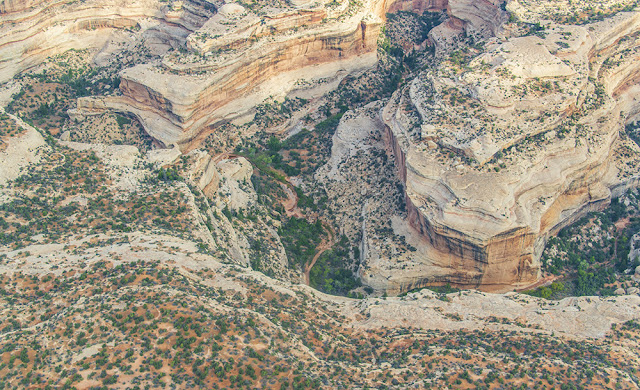 The image below includes several possible "future arches", but right now they're just caves.  There's an off-road-vehicle trail in front of them, and there are two vehicles in the shade beside the right cave. 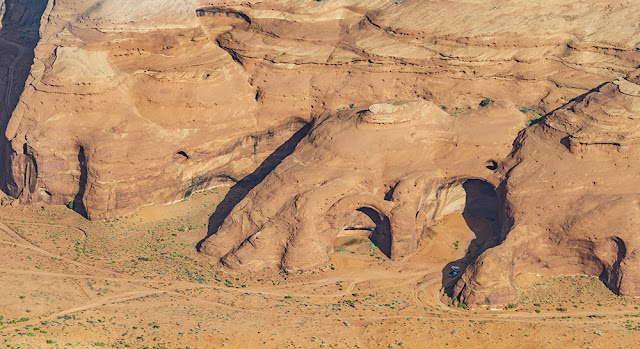 Monument Valley was definitely the best part of the flight. Below is a ridge of spires that look like they might be waiting for some future event. 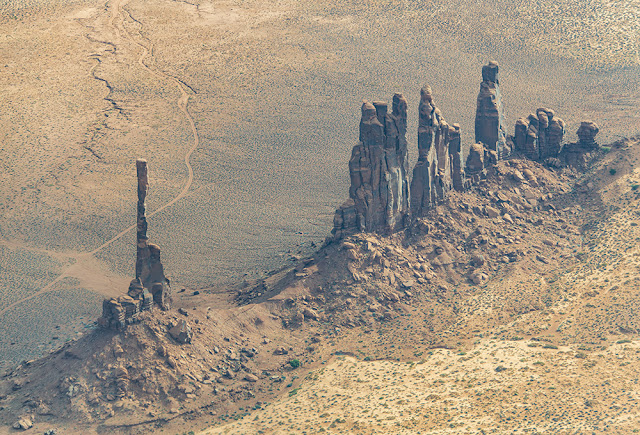 The rock formation below looks like five fingers thrust up out of the earth.  Never mind that almost all current humans have four fingers! 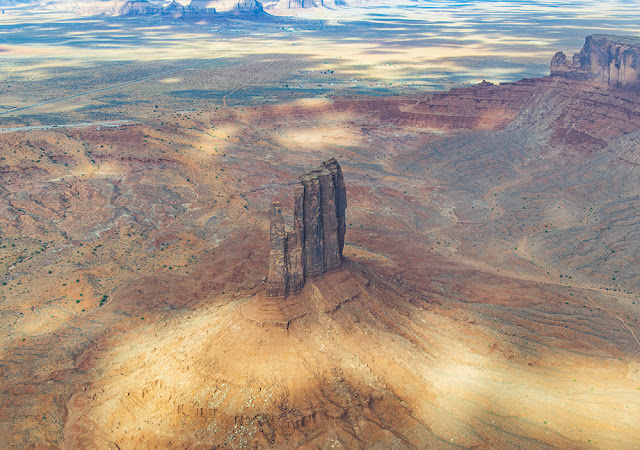 One of the best features of the Utah rock formations is the juxtaposition of red rocks and white rocks. The image below serves this right up! 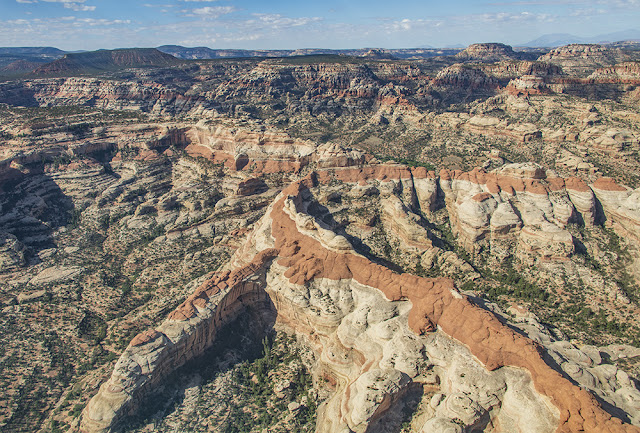 You can probably tell we had fun flying over southeastern Utah. Almost as much fun as we had flying around Mount Denali last year. We hope to see/hear of your RV adventures in the future!