We're not in the Northwest any more Toto!

As we make our way south to our winter home in Jojoba Hills, we are visiting some of the Red Rock parks that we didn't see in 2015.

For many years we had a large format (24"x36") photograph taken in Monument Valley on our bedroom wall. Now we have seen the subject in person.

I heard that you couldn't drive into the park without a paid Navajo guide. We checked at the Welcome Center, which is outside of the park, and found that this was not true.

With a $20 two-day park pass, we were able to drive the same road taken by the lower cost ($62 per person) two+ hour tour. The dirt road was rough in places and required a four wheel drive vehicle. Craig said that after four years he finally felt justified in buying a Jeep. 🙂

There are also longer tours that go further into the park, but we were well satisfied with what we saw.

I honestly felt we had a better ride in our closed, air conditioned Jeep, with fairly comfortable seats, and a grab bar to hang onto when going over some of the roughest stretches, than the people we saw.  They were in the back of the tour trucks, sitting five to a seat, holding bandannas over their mouths to block the dust, and trying to take pictures while bouncing over rough spots in the road at higher speeds.

We were also able to pull over, or in some places just stop (if no one was behind us) to get the shots we wanted. For example, we pulled over to the right side of the road to get the image below. 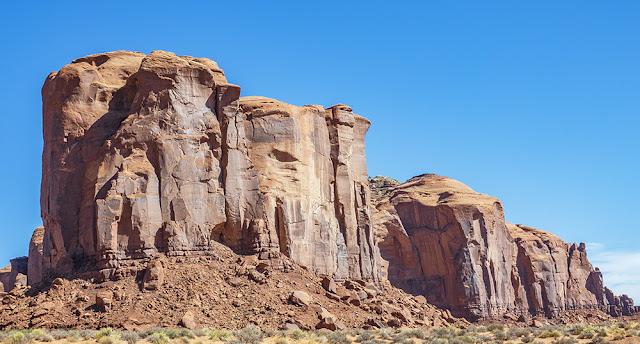 I was out of the Jeep, choosing the best angle, when I looked across the road and saw this: 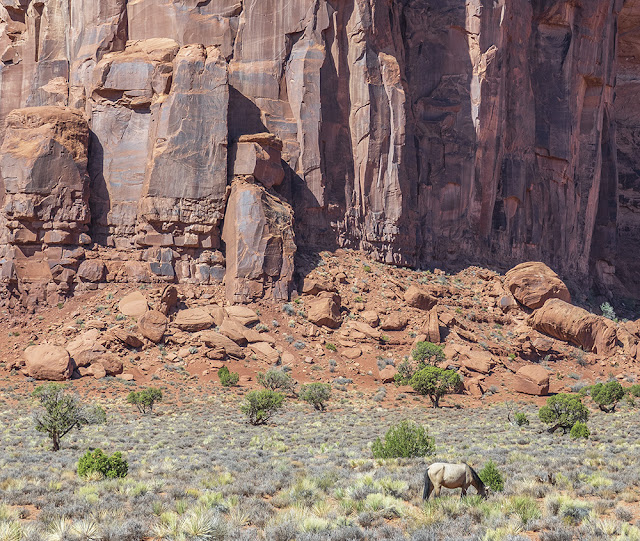 I swear this horse was almost invisible. He looked almost green, and I would have never seen him from a bouncy truck. 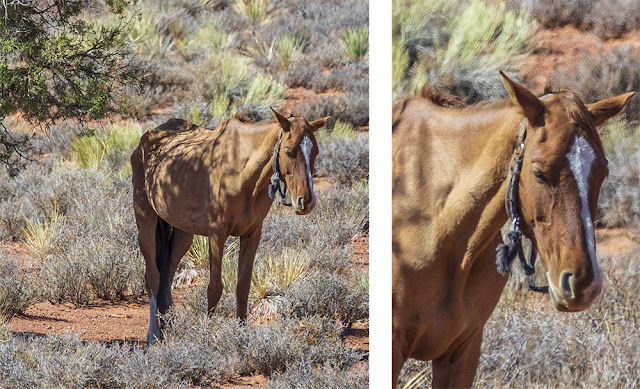 There were several other horses in the area. The brown one above was standing in the shade of a small tree. He was not always "wild", as he has a rope around his neck.

The tours do stop, but only at the larger designated pull outs.

At the "North Window" parking lot, several tour buses were just loading when we arrived. Dozens of tourists hurried down to them, from the rugged path that wound around the rock walls.

As we started up the trail, we heard the last calls over a bullhorn to reboard the trucks. We then had the path almost to ourselves. As we climbed I looked out at the view, but I also looked at the rock face above and behind us.

There I noticed a horse standing quietly like a statue. He seemed glad the crowd of chattering tourists were gone too. 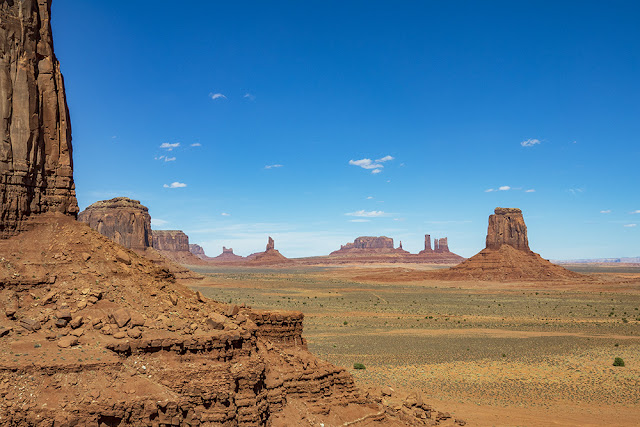 This was the view from the North Window that we climbed the trail to see. By now the haze had left the air and the sky was a brilliant blue.

As we returned to the parking lot, a huge gust of wind came up, and the Navaho vendor got a blast from the dusty parking lot!

As we drove the bumpy road, we stopped many times and were able to go at our own pace. If vehicles caught up to us, we pulled over, let them pass, and waited until the dust settled before getting out or opening the window, for our desired shot. We took almost four hours to drive the same distance as the two hour tour.

Here are some of my favorite sights: 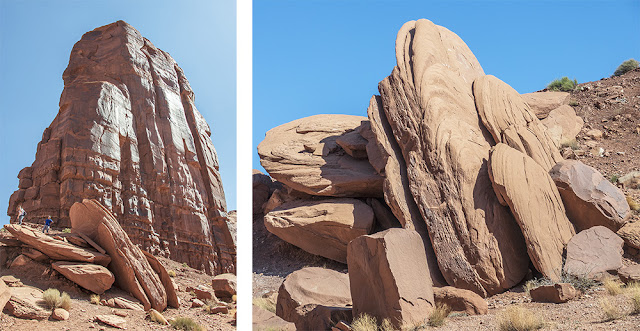 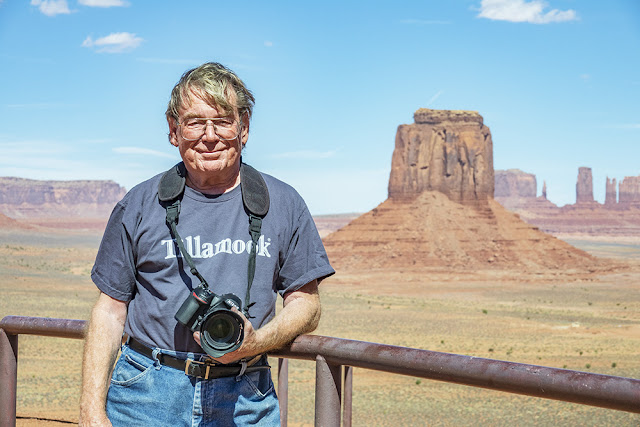 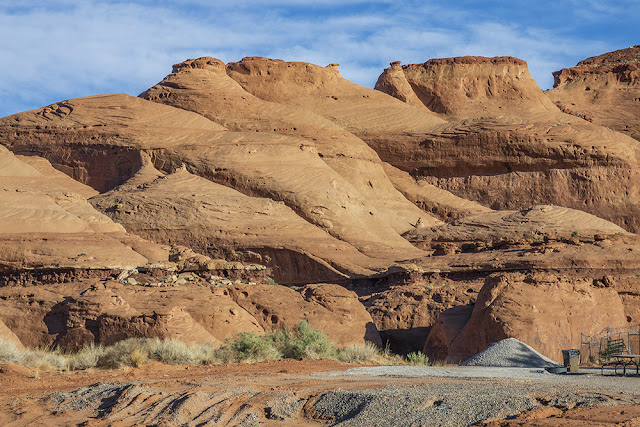 The rocks above were once sand dunes, they are now sandstone frozen in time. 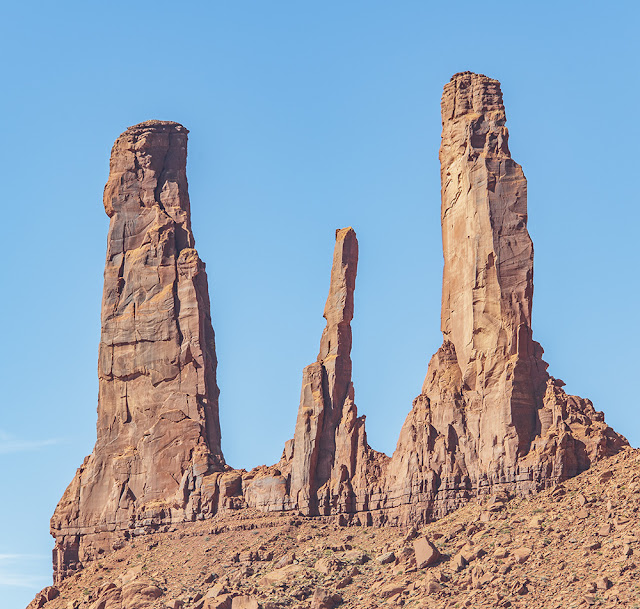 They call these the Three Sisters. I think they look like a family, Dad - Kid - Mom.

[From Craig]  We stayed at Goulding's Campground, part of an extensive complex that has evolved from a trading post that was founded in 1925.  The rocks surrounding the campground were almost as picturesque as those in Monument Valley itself. 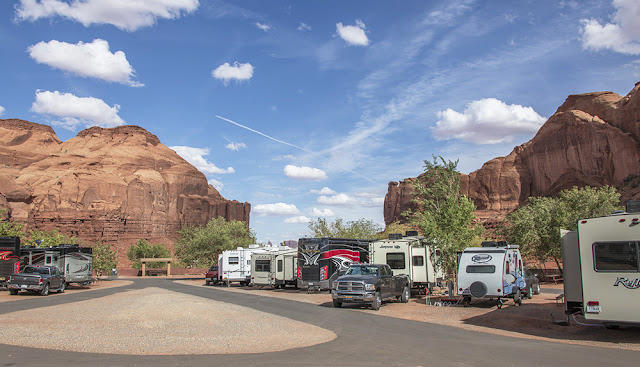 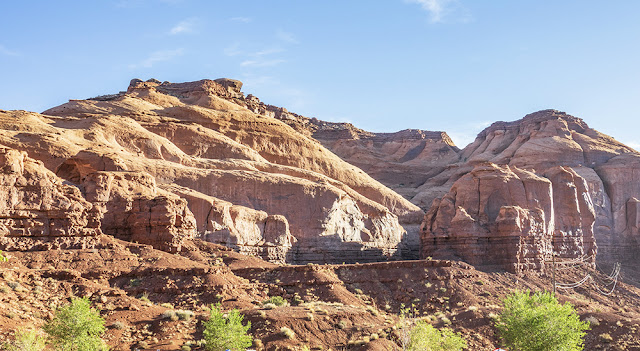 The large masses of sandstone in monument Valley are called "monuments", and the more upright, isolated ones are also called "buttes".  Here is a butte that we didn't record the name of, plus some others in the background. 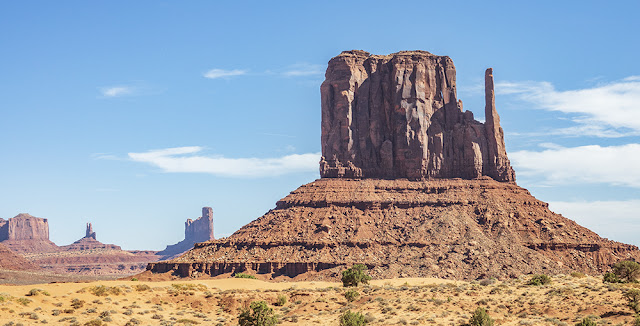 Like people, some buttes and monuments are slim and others are stocky.  The one below is named "Camel" and is a slim one; I don't suppose "fit" applies to rocks as it does to people? 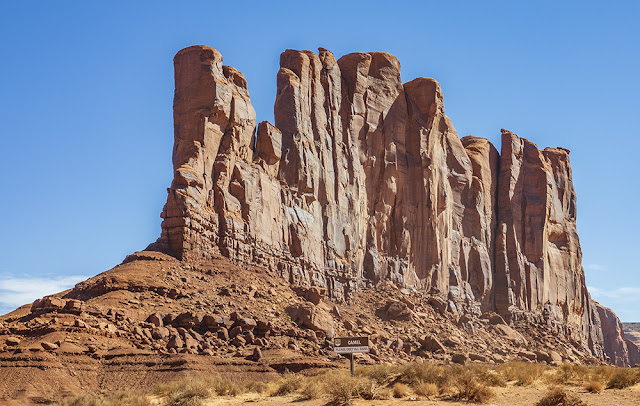 I took quite a few shots of this rock.  To me it looked like an eagle looking upward. 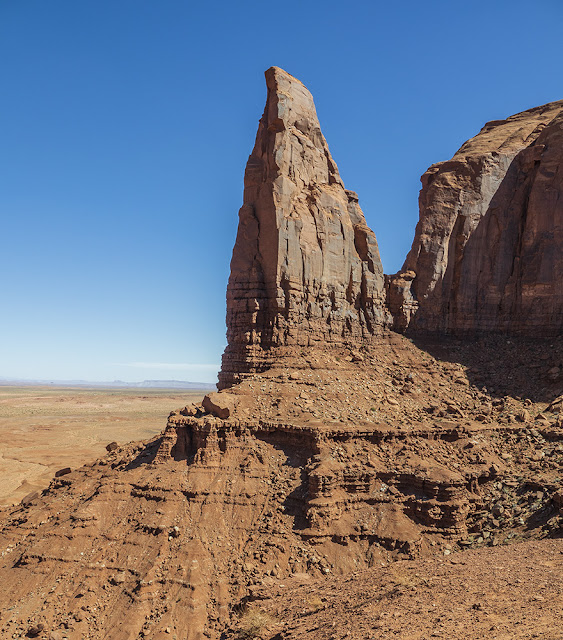 Finally, there's what I thought of as the "sentinel" effect.  Many of the long buttes/ monuments have one or isolated tall rock(s) at their end, as if standing sentry duty against invaders. 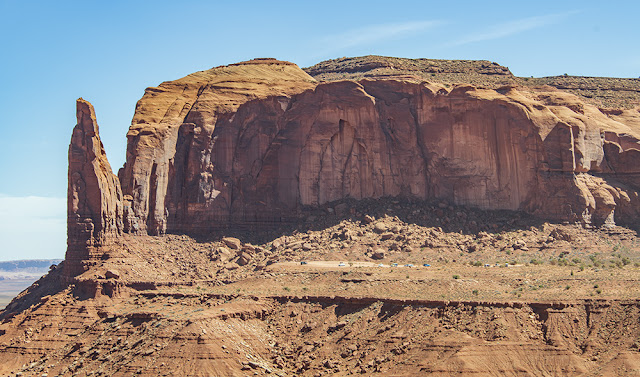 Monument Valley has so many excellent rocks to help exercise one's imagination.  Come see them!