Max, a friend in San Diego, has asked if we meet new friends in campgrounds. We have, but not as many as we would like. I think he imagines campgrounds as big kumbaya meetings around communal campfires. When actually, as campers we are fairly private, and although friendly greetings are often exchanged, chatting with strangers is rare.
But once in awhile the usual banter starting with "where are you from ... " turns into a meeting of  new friends. This week the couple with the fifth wheel next door, stopped by and said hello. She saw the Escapees sticker on our rig which led into my mentioning Jojoba. It turned out they have been there and know Coney and Carrol.

We chatted for several hours and the next day went to the Mine Tour together. 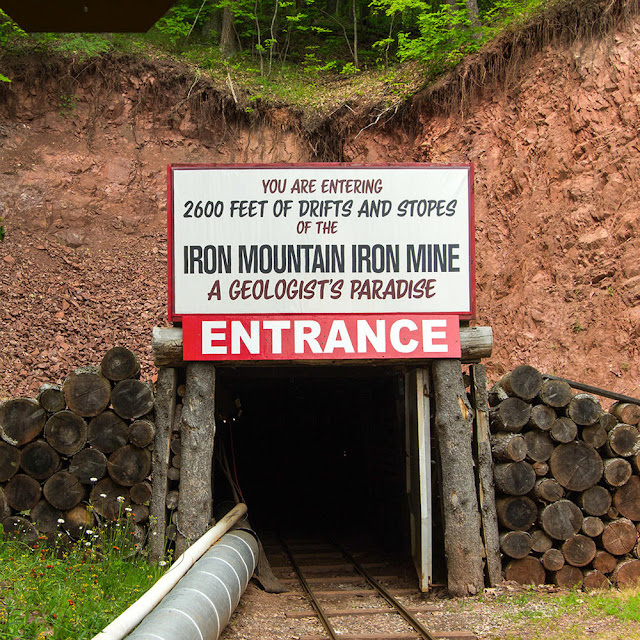 I've been on coal mine tours, and I've seen large open copper pit mines, but I have never been on an iron mine tour until this week in Vulcan, Michigan.
I'm not sure I like the way the earth seems to sag just above the mine entrance. Had I noticed it, I might have been hesitant to go in! But we did. The mine tour has been going on safely for many years. 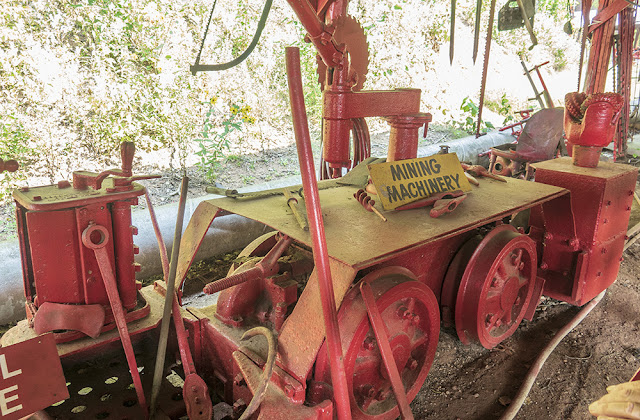 The tour started with a small outdoor exhibit of old mine equipment. We had an excellent tour guide who used to be a history teacher. I just felt he enjoyed sharing history with us.

We were given hard hats and rain coats to wear in the rather cold and wet mine.

We rode a single wide train through 1/4 mile of mine tunnel. It took us only a few minutes, but we were told it had taken seven years of manual labor to dig out. No power tools were used.

We then walked down into a tunnel system where the floors had been smoothed, and lights  and handrails installed, long after the mine was closed.

Along the way we learned more about the hand work involved in this type of mining, and the hazards experienced by the miners. At a time when a loaf of bread cost about five cents, they made seven to ten cents an hour. No benefits or safety regulations. 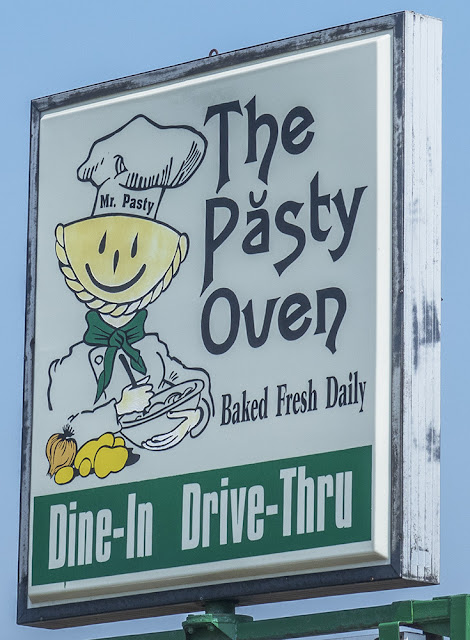 After the mine tour we stopped for a miners lunch. Pasties of course.

The pasty was a lunch food brought over from the Cornish mines in Britain. It is a large closed pastry filled with meat, potatoes and/or turnips that the miners could eat "out of hand." These were some of the best we have had.

We ended the day with another "sit around" at the campground. No campfire, just lawn chairs and an open grassy space.

Our new friends left the next day, but we have exchanged contact information and hopefully we will meet up again.

Today is a "cozy" day. We are relaxing in the Alfa enjoying the sounds of a midwest summer rain.

Tomorrow we travel on.