Our next stop along US 2 was on the Garden Peninsula, which extends 22 miles southwest into Lake Michigan.

Fayette Historic State Park features a somewhat restored "company town" that was built in the late 1800's for the management and workers at the Fayette Iron Smelter.

The buildings were empty, but there was plenty of signage that explained what each was and how they fit into the life of the town. 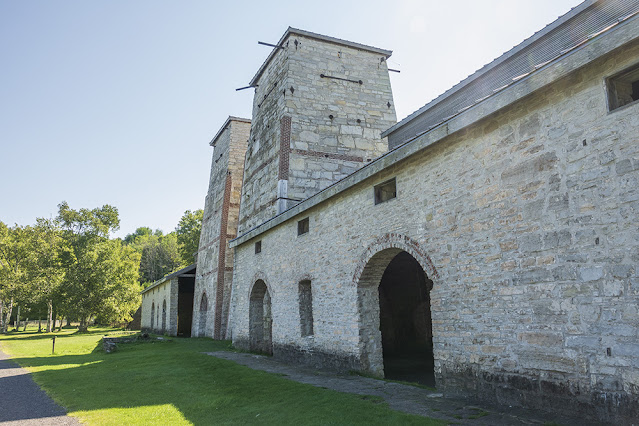 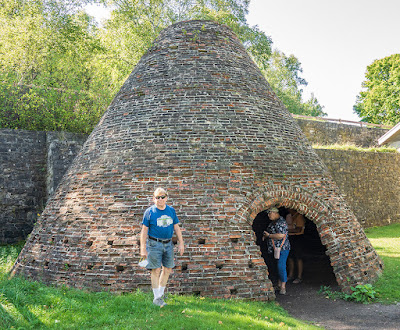 The charcoal was made in these large kilns.  Several years ago, we saw similar cone-shaped kilns in Death Valley. 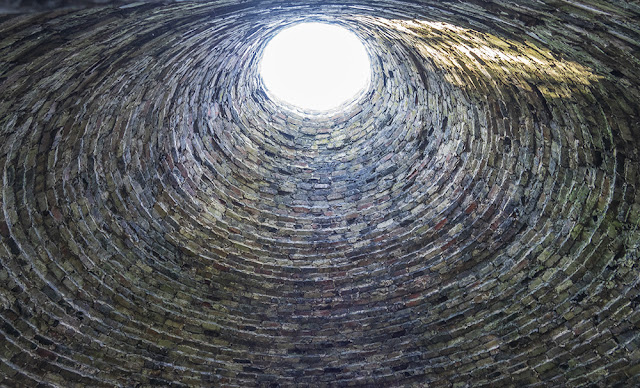 Looking up at the hole at the top of the kiln can make you feel a bit dizzy. 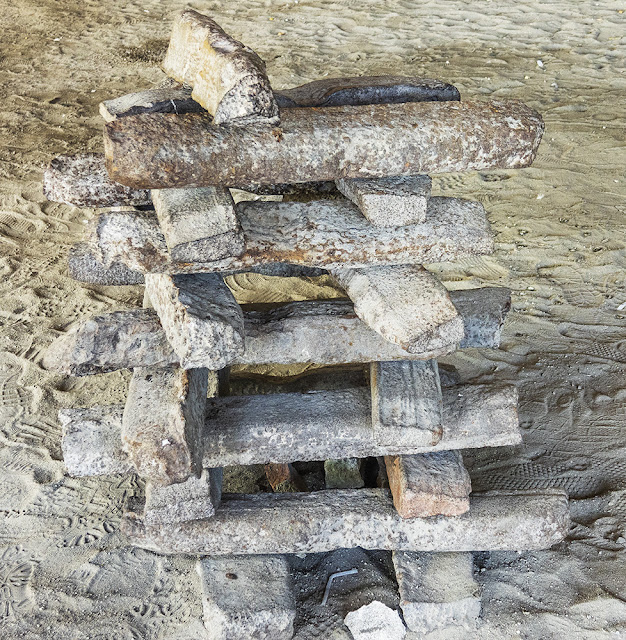 The end result was charcoal pig iron, which was then sent by ship to the Great Lakes steel companies. 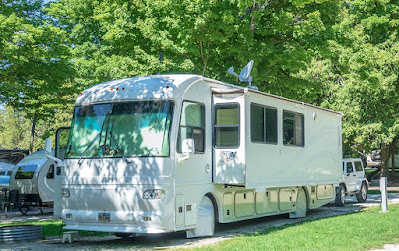 The Fayette state park campground was pretty, but quite crowded.

Although there were a few larger RVs, most of the campers had smaller trailers, pop ups, and tents. It seemed almost every site had a trailer, a tent or two, a boat, and a screened easy-up over the picnic table. For all of that, everyone was peaceful and there were no loud groups. 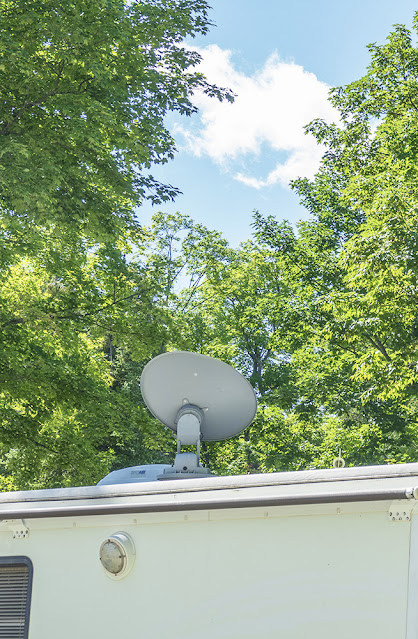 Many state parks have no hookups, or as in this case electric only. Starting with a full fresh water tank, we can be self-sufficient with respect to water for about five days, or up to a week if we use the park bathhouse and are careful with our water usage.
State park campgrounds are often  "in the trees." We were lucky to find a small hole between the branches which allowed us to get satellite reception. 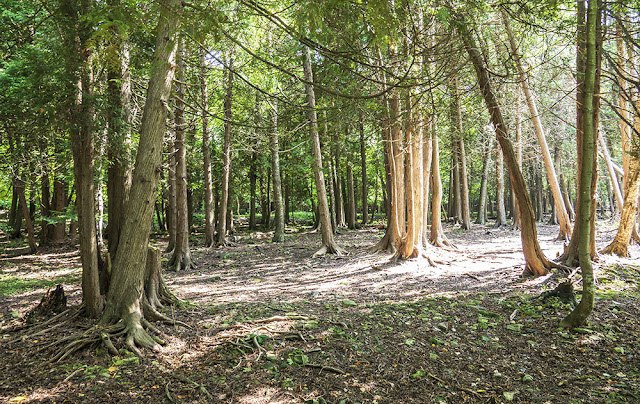 We took a couple of walks while we were there. This short peaceful wooded trail was quite a contrast to the busy campground. 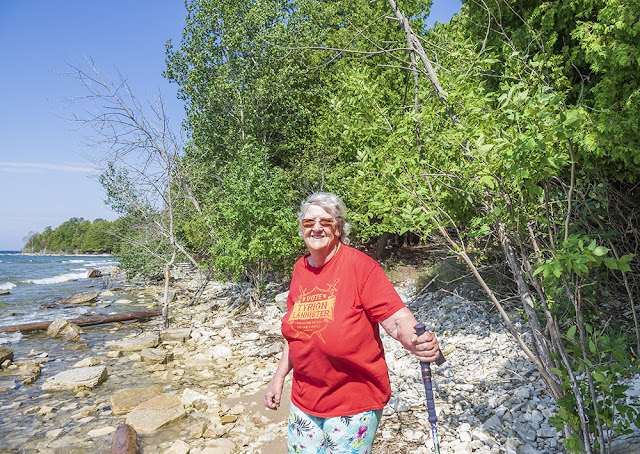 A rocky shoreline was just a short walk from our camp. 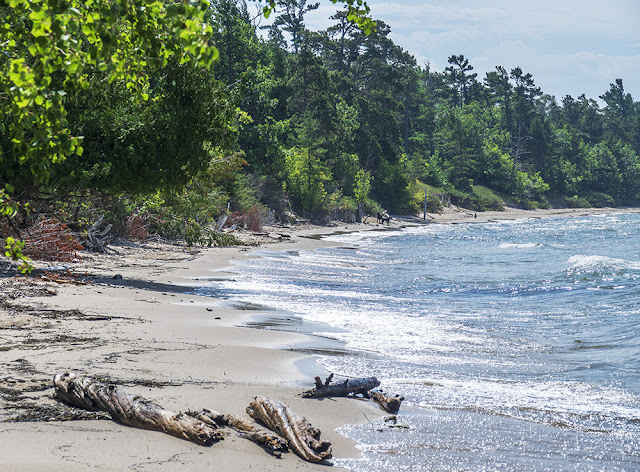 We also found this stretch of sandy beach.

Not far from the sandy beach above was the old Fishermen's Cemetery. There were some very old stone markers and some new wood crosses marking old graves. One of the churches in the area maintains it. 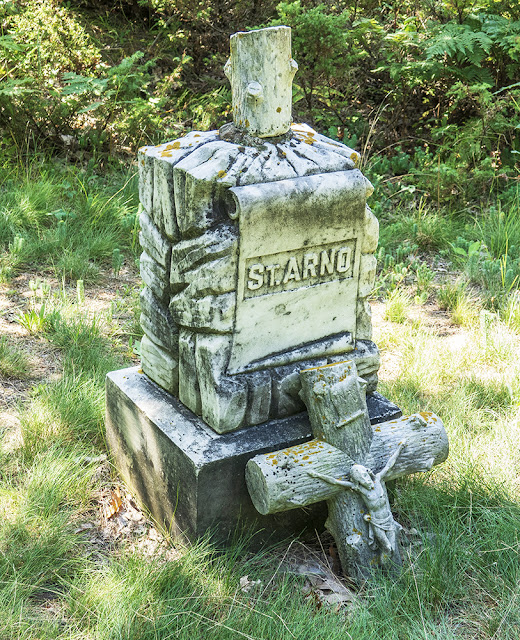 Although it was broken off, this was one of the more elaborate markers we saw. I think it was a family plot marker. Many of the graves are unidentified. 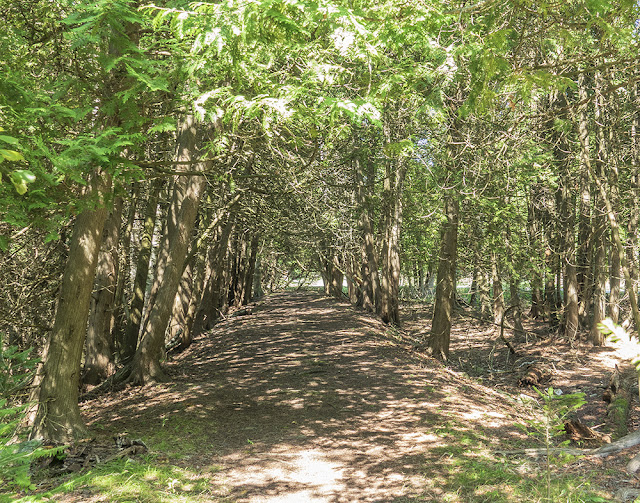 On our walk back to campground, we went along this berm in the forest. We discussed how and why it was there, and decided it might have been an old road going to the cemetery. 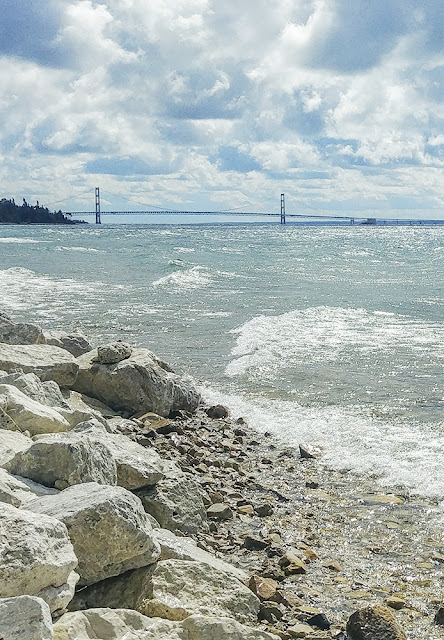 On September first we went back to Highway 2 and headed east to St. Ignace, which is at the north end of the Mackinaw Bridge.
I'm glad I made our  reservation here way back in February. Our week included Labor Day, which is always a busy time in the campground world. They had a very nice pot luck for us campers on Sunday. Many of the campers come here every year for the end-of-summer holiday.
We didn't do much while here, this being our third time in the area. We didn't go over to the Island, nor across to the Fort because we had already done those tourist things.
We did go on a nice walk in the Hiawatha National Forest. No signs of fall color yet, but the wildflowers are making their last stand. 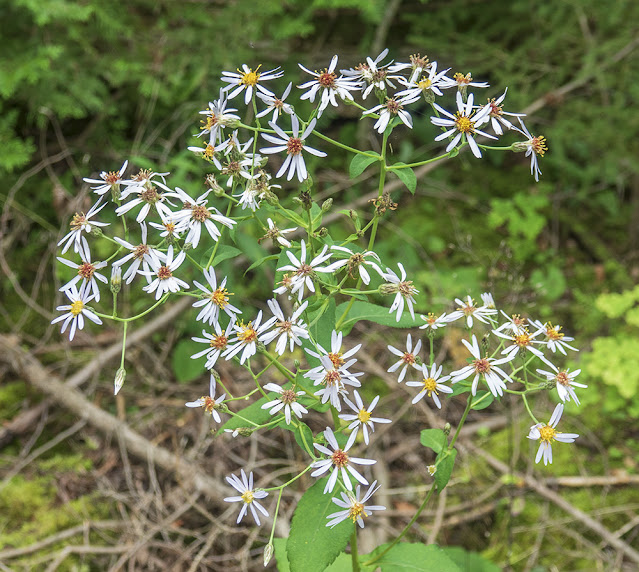 As I have noted before, our route this summer was based on driving US Highway 2 from end to end. 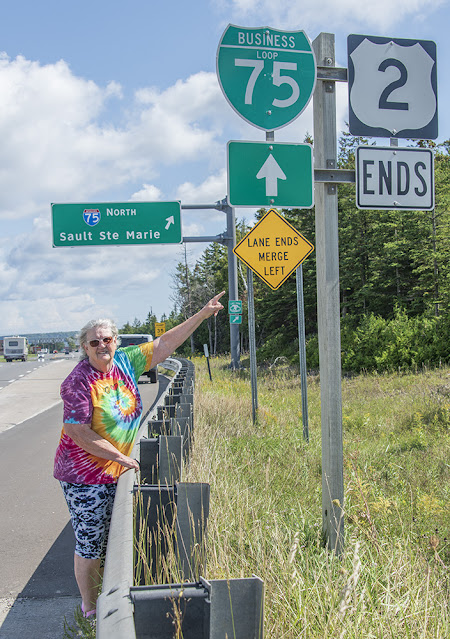 Well, we made it.
Longtime readers may recall this similar image from Key West in December 2014.

We still have some good plans along the route back to California: including visiting with old friends, stopping in Minnesota for a new RV roof, and taking a swing down to Louisiana for some routine maintenance on the Alfa by one of our favorite RV techs.
So keep an eye out for my next update, and come along for the ride.
Posted by Merikay at 2:43 PM