It's As Good As It Gets 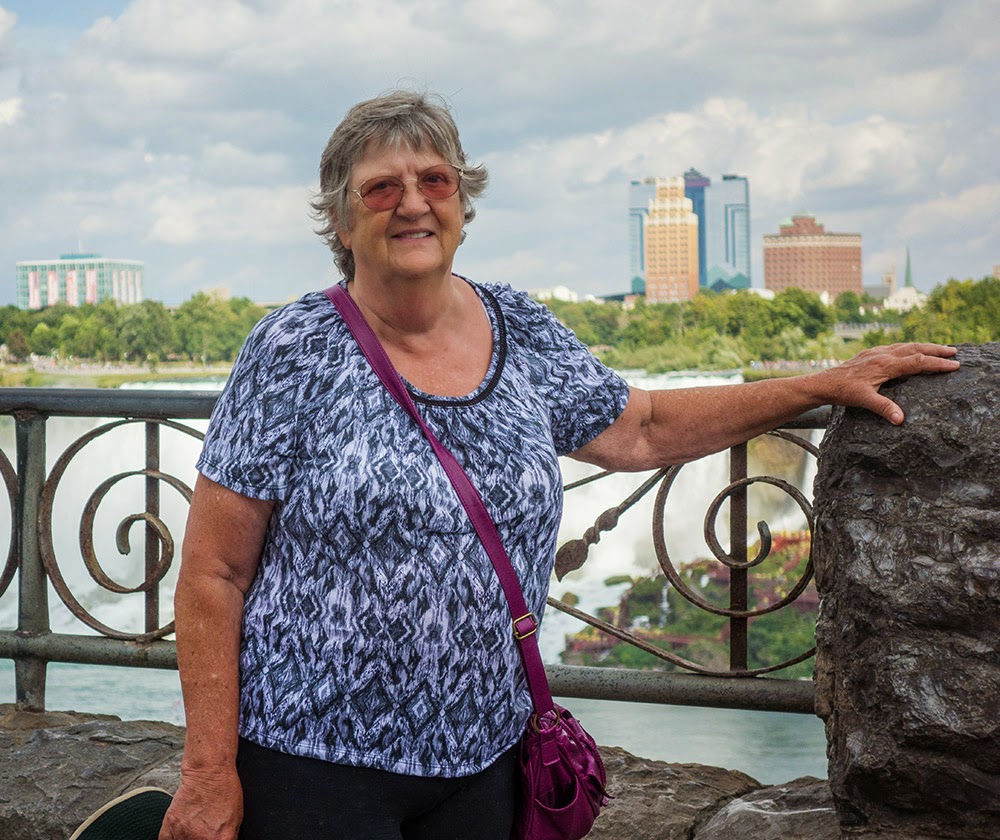 Looking over at the rush of water tumbling over Niagara Falls with the sun shining and a soft breeze brushing against my cheek I thought to myself "I think this is the best time in our lives." We are free to go and do whatever we want. If we still had a house, and were doing all these things as vacation trips, we would be dragged down by knowing we had to go back and by thinking about the work that waited for us. If we were younger and had kids along, as the mom it would be up to me to keep things together. Keep everyone happy. But now, we are healthy. Or at least we are still able. Yes, it's as good as it gets.

Thursday at the Falls was long and fun. We did the tourist things.
In the early afternoon, we parked the Jeep in the all-day lot at the base of the Skylon Tower because we had dinner reservations there.  I didn't want to have a long walk to the car afterwards. Instead, we walked down the hill to the Falls Park.

First on our agenda was one of the Maid of the Mist boats. We given red plastic ponchos to wear. Small people and kids got green. I had to laugh because Craig got tangled up in his and I had to help him. So much for not having to do the "mom jobs". 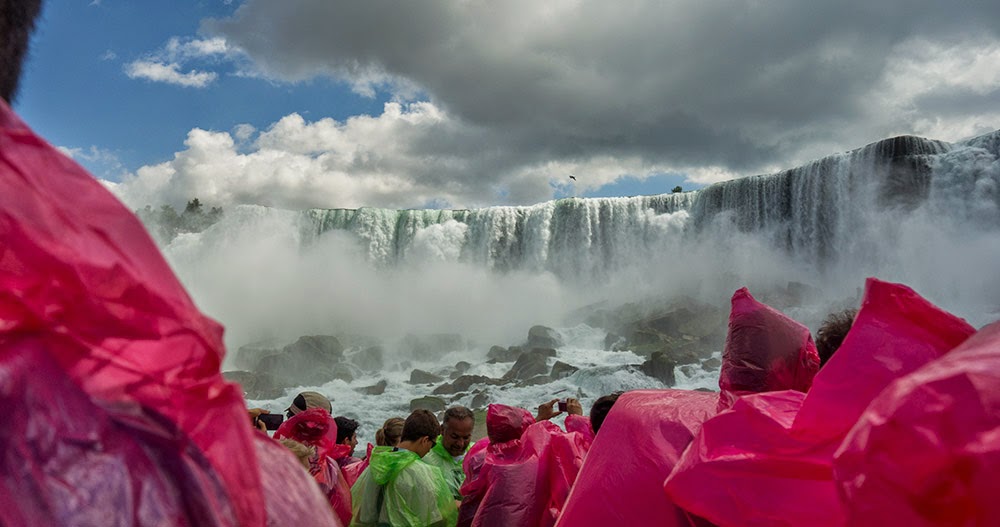 From the deck of the boat we got a different view of the American Falls. Since my camera is not waterproof, I kept it in a plastic bag for most of the tour and just enjoyed the rain-like mist in the air. We also came (what felt like) really close to the Horseshoe Falls. 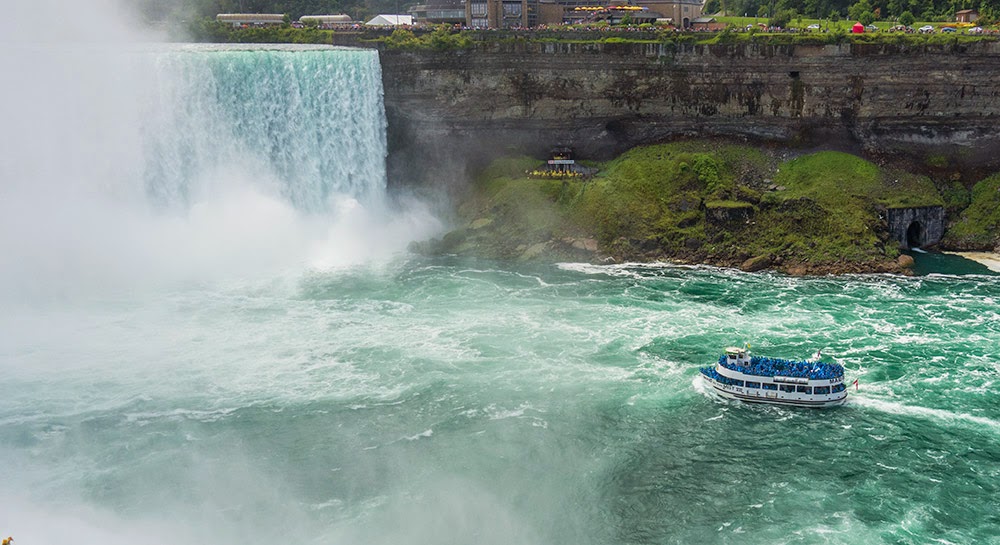 I really expected the spray to be cold, but it was not. Wearing a big plastic bag was hot, so getting a wet face felt good.

After the boat trip we walked along the Falls for a couple of blocks to the next venue, "The Journey Behind the Falls". 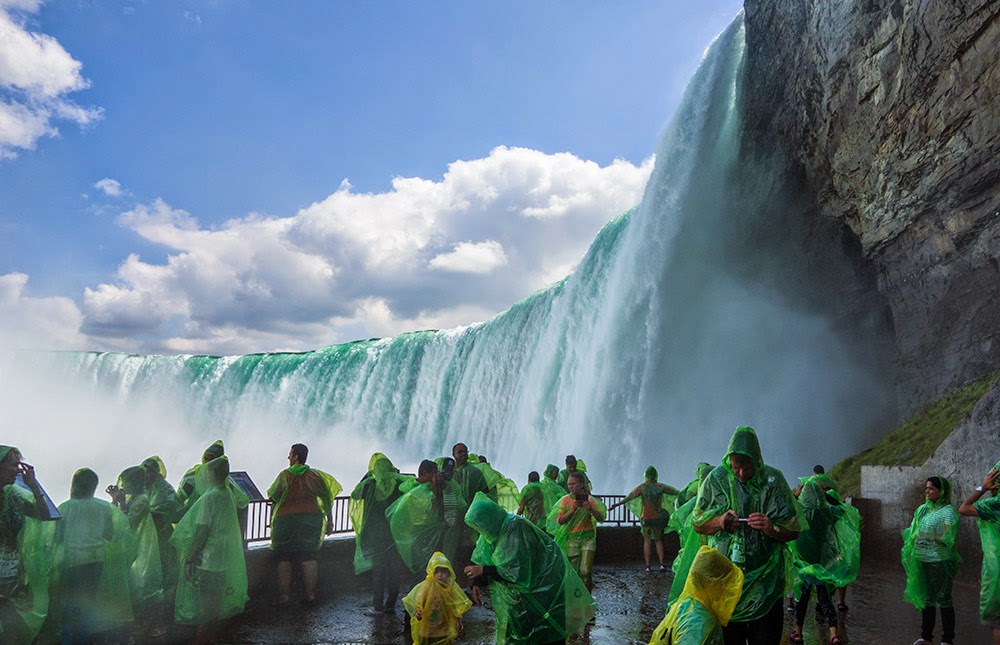 Here we were given green ponchos, went down an elevator, through a tunnel and out onto an observation platform. Once again it was best to keep the camera under cover! We also walked thru a tunnel behind the falls and looked out through a couple of portals behind the falling sheet of water. It was quite impressive.

It was still quite early by the time we were finished.  Walking back toward the Tower, we decided to hike on over to the Niagara Falls Historical Museum.  I know, "hiking" is for natural trails, and "walking" is for city streets, but since I was getting a bit tired, it was a hike!

The Historic Museum was not big, but the exhibits were excellent. 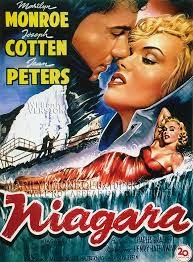 It was a bit corny, but fun to see the Falls as a honeymoon location of the past.

It was also great to be able to sit down and rest for an hour and a half. 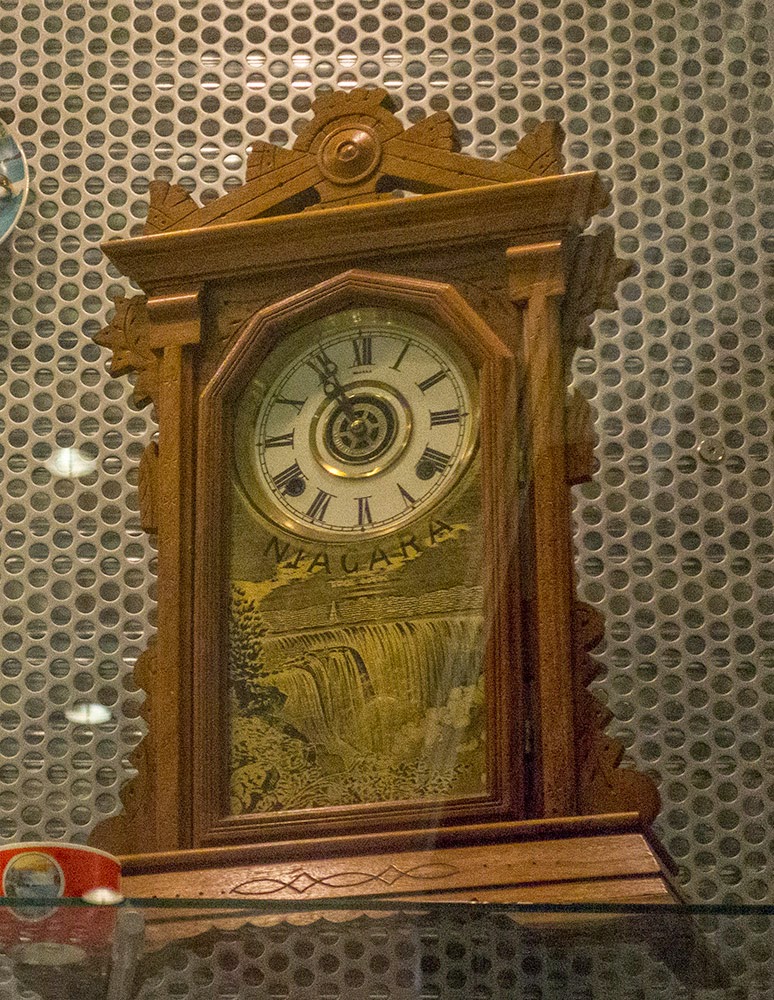 In addition to an exhibit about the War of 1812, there was a collection of historic items. This clock is of the same type and vintage as one of the very few items I kept from our house.

This one commemorated Niagara Falls, while ours has a glass front picturing the Statue of Liberty. My daughter is keeping it safe and wound on her mantel in San Diego. 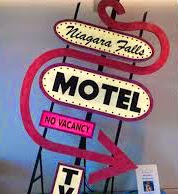 Their special exhibit was about Niagara motels from the 50's.

The pictures of them then and now were fun. As we walked back to the Skylon Tower we passed several that had been depicted in the exhibit. Some had been kept up, but at least one was being demolished.


The walk back did not seem as long as the walk there. I guess it was because it was more downhill and because it was getting a bit cooler, and the rest watching the movie restored my energy. 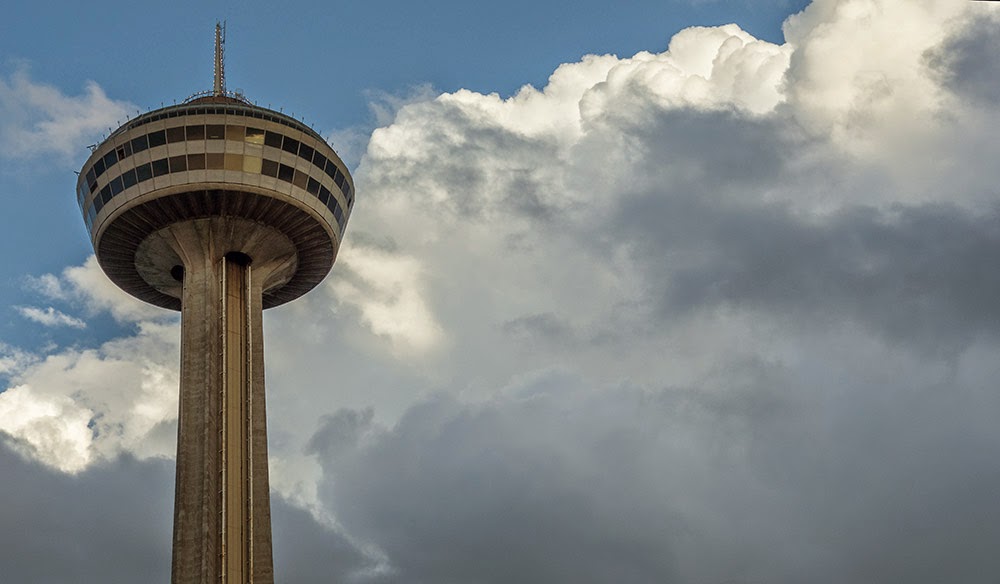 Our reservation was for 9:00 because we wanted to see the Falls lit up at night from the tower. I had a plan. That morning I had packed a cooler bag with an ice block, bottle opener, and wine glasses. My plan was to add a bottle of Chardonnay from the box in one of the Alfa's bays, before leaving for the day. I planned on sitting in the park and relaxing with a glass or two of wine before going up for dinner.

A good plan except for one thing.  When we got back to the Jeep, after changing into fresh clothes in the washrooms, I discovered a bottle-less cooler bag. We both laughed, ROTFL almost.

We were all dressed up and no where to go! Until Craig asked if there was a bar. Yes, there was, and we were able to go up and wait there.

By the time we were seated it was getting dark and they had turned on the colored lights on the Falls. They may have been wonderful from ground level, but from the tower they were pretty lame. Simple white lights would have been better, IMO. 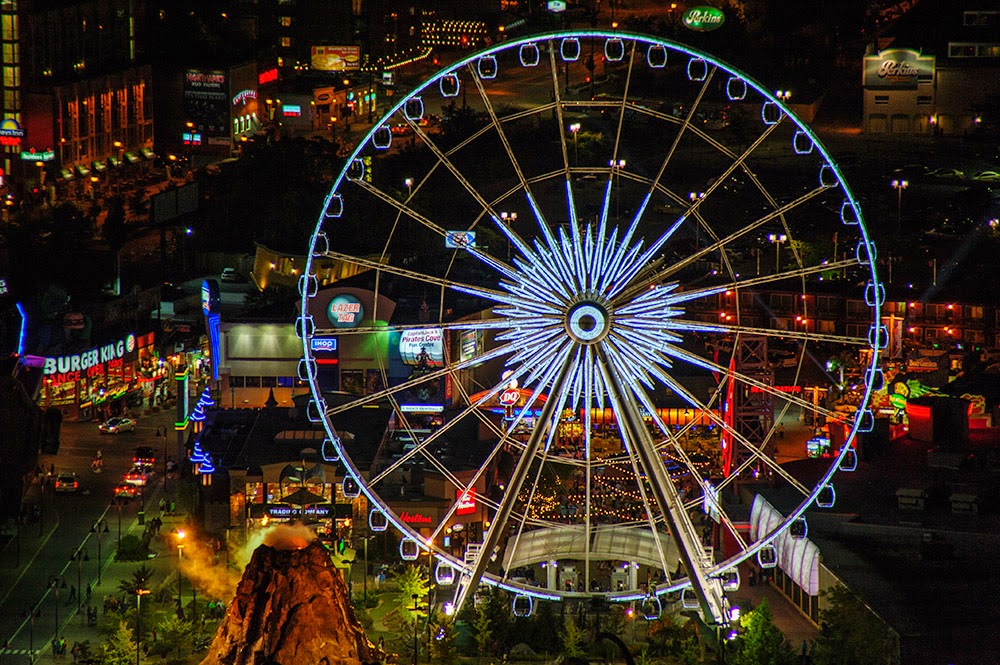 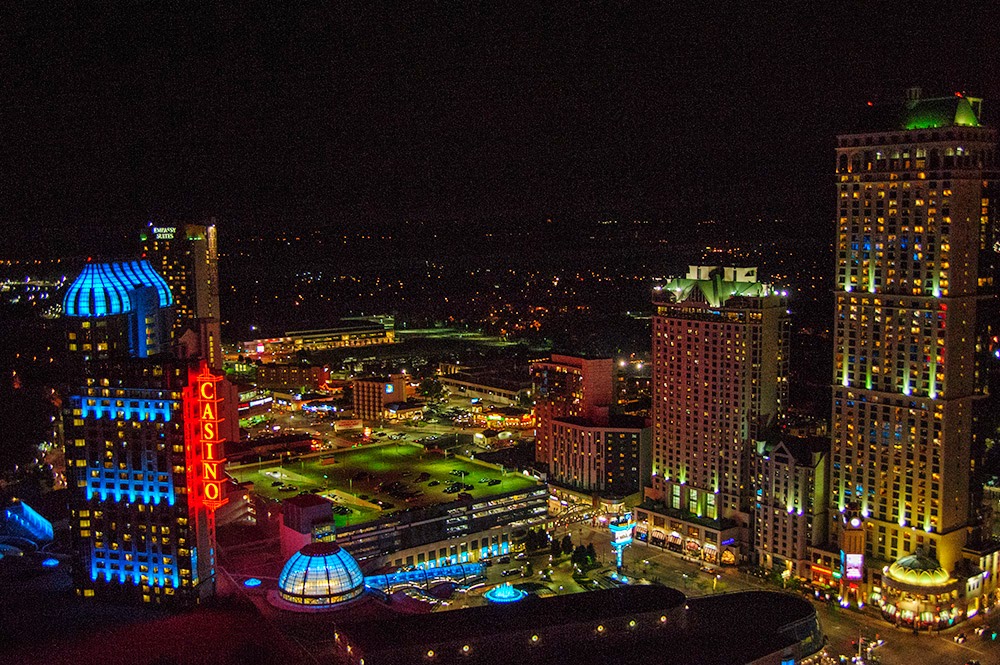 The night-time view of the city was beautiful, and we enjoyed an excellent meal.

At the end of the evening we were quite happy to be able to go back to our home and back to our own bed instead of off to a motel or hotel.

One of the joys of RVing.