Niagara Falls US Side

Although our Friday drive was only 20 miles, it took almost two hours! Much of that time was inching our way across the bridge and passing through Customs to get into the USA. No problems, except for the agent pointing out that my passport was not signed, and having me do so.

Once we were settled in at our new RV park location we just relaxed and tended to some mundane tasks, like finding places to stay this week and through the Labor Day Weekend. For my non-RV friends, Labor Day, Memorial Day, and the Fourth of July are big camping weekends and many parks are full. None of the usual discounts are applicable either. In the end, I found a spot at a park in Maryland for Labor Day, and filled the days before then with a reservation in Gettysburg PA.

When talking to people before coming to Niagara, I often heard that you could see the falls in one day. But we really like to savor natural wonders as best we can, so I booked two days on each side.  I also heard that the Canadian side was much better than the American side. I wanted to see for myself.

I have decided that although you do have a much bigger view from Canada, it is not so much "better" as it is "different".

On the American side you get to see more of the river rapids. 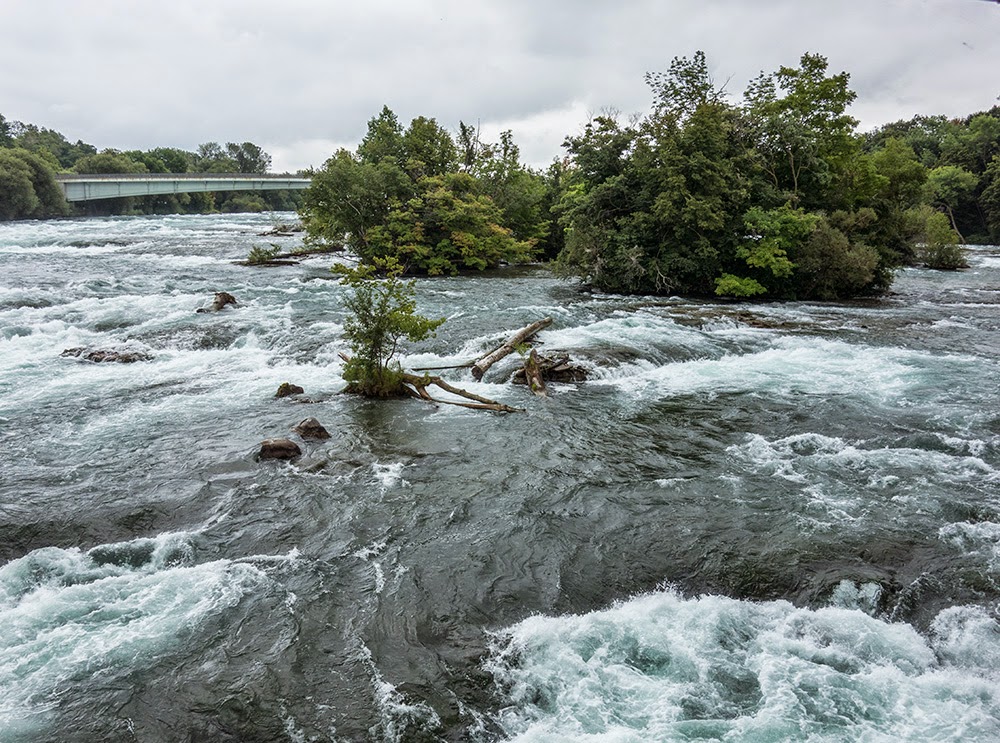 Because the sky was quite overcast, and the water was rushing over and around the rocks, it did not seem as blue in color. 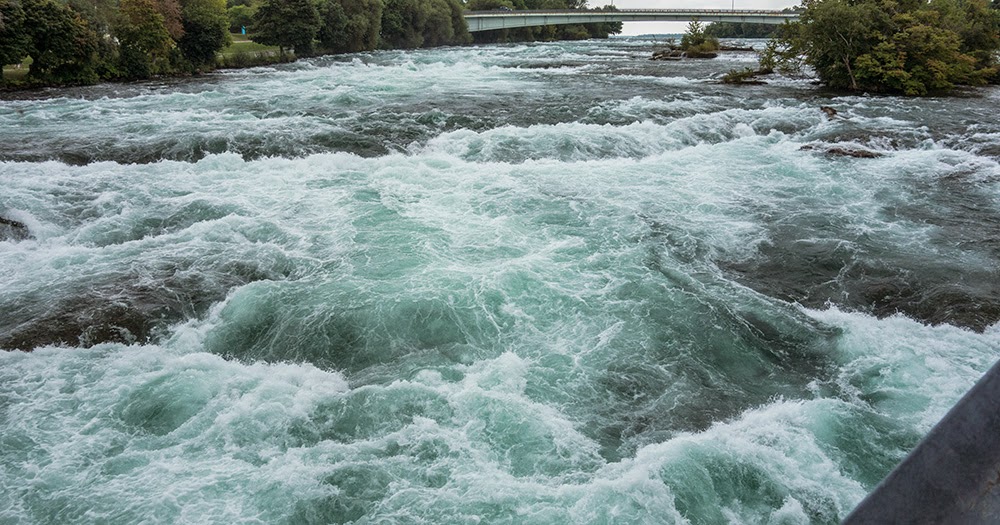 Later in the day, when the sun came out, it did. We walked across a foot bridge that went over the rapids.

Much of the movie we watched at the Historic Museum was shot  on the Canadian side of the Falls. But either because it was easier to go across the border in the 50's or because they were taking creative license with the location, the key scenes were shot at the Cave of the Winds, which is on the US side.

There is no longer a cave behind the Bridal Veil Falls due to erosion, but the steps and platforms are similar to those shown in the movie. Every year the wood structure is removed in fall and rebuilt in spring. If it were left in place, the ice would tear it out. 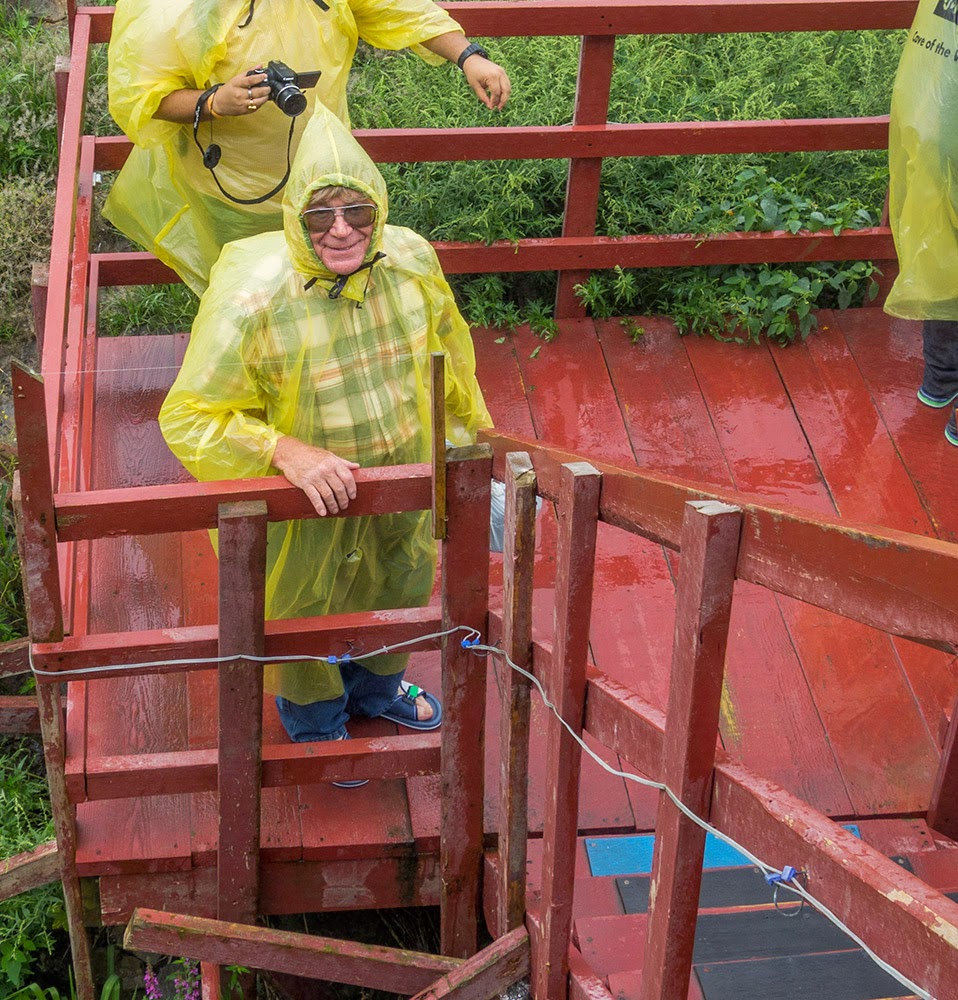 We were given yellow ponchos for this one. 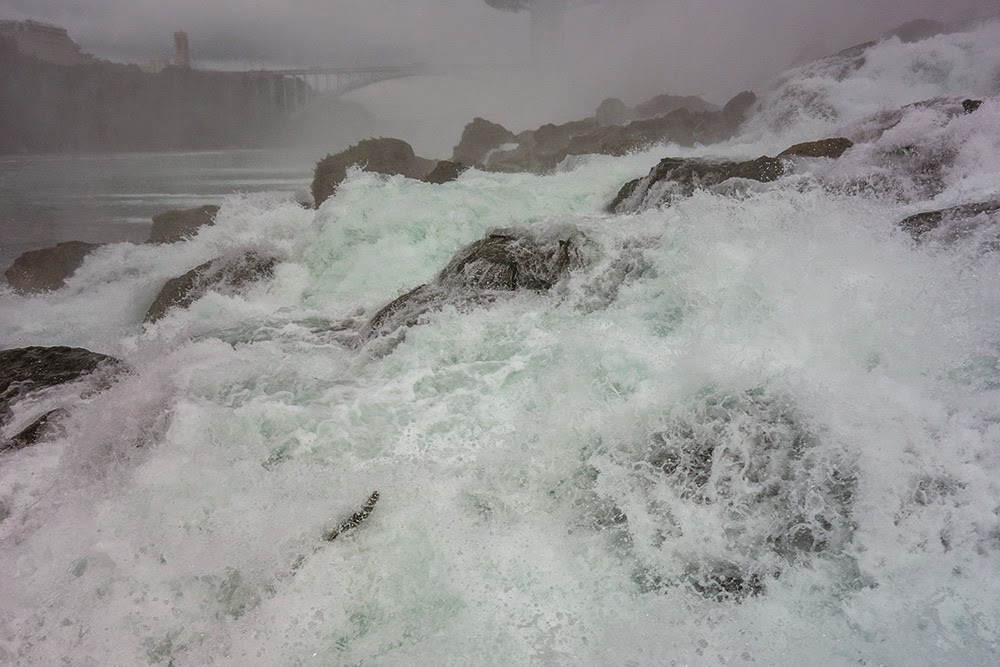 The water really roars over the rock talus below the American Falls. This was only a few feet from the platform I was on. After this shot I put my camera away to keep it from getting too wet.

At the top of the steps is a platform they call Hurricane Deck. Imagine the worst rain you have ever been in and multiply that several times. By the end of the tour we were soaked to the knees. Good thing everyone was required to wear the provided sandals.

Nikola Tesla had much to do with the early hydro-electric plants and alternating current. He was taking a walk in the park. 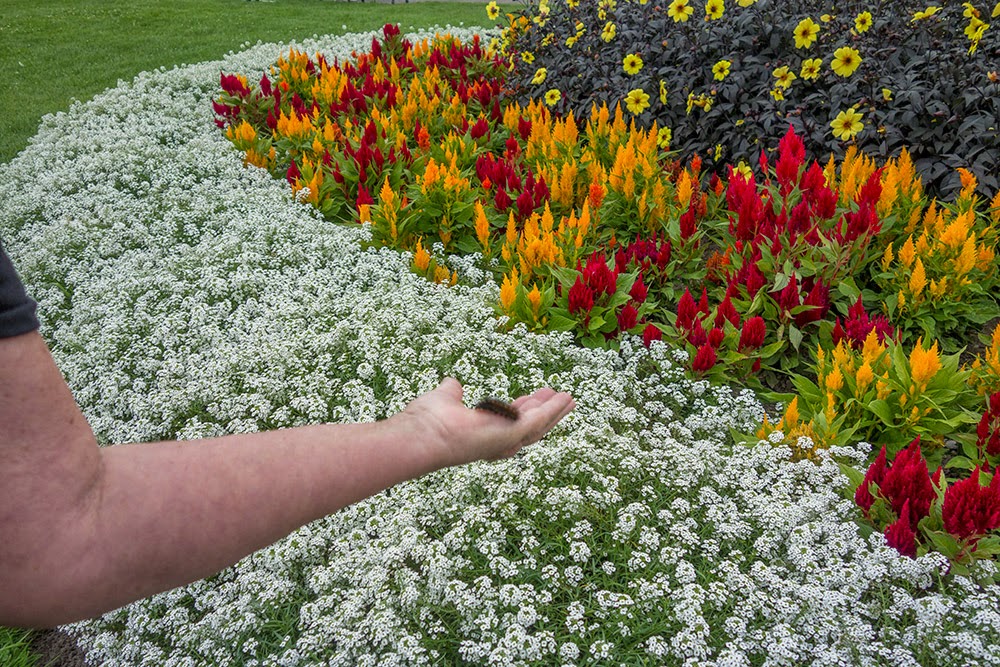 I got into a bit of "save the wildlife" mode here when I found this Wooly Bear on the very wide paved path. I decided he would be safer (and hopefully happier) among the flowers. I hope he doesn't eat them. We loved to play with this type of caterpillar when we were kids. If we found two we would have a race.

So, our memorable four days at Niagara Falls have come to an end.

If you have never been there, do plan on more than one day to see it. There is a lot of walking, but there are other ways to get around, and the pathways are handicap accessible.

If you have been there, the water is still flowing.