A few days in Talkeetna

I almost hate to put a new post up to replace the High Point one, but time does move on.

I scheduled a week in Talkeetna because we wanted to take a flight and ride the jet boat. We did both on our first day. The rest of our time has just been taking it easy and relaxing. 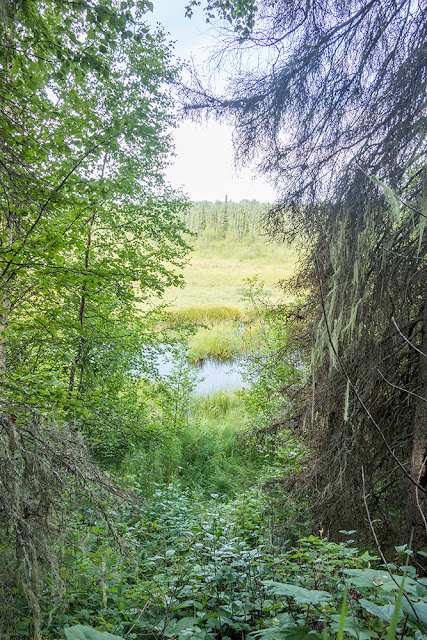 One of the afternoons we found a nice path through the woods to walk.

I think it was called the Ridge Trail. There were a couple of unmarked trails starting from the same parking lot.

The temperature was pleasant, but the humidity was a bit high in the woods.

I think this picture looks like a paperback book cover! 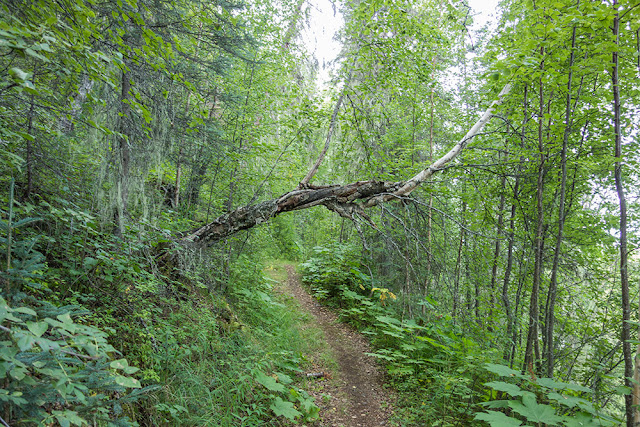 In spite of the many small planes buzzing overhead, and the frequent train horn honking, it was very peaceful compared to the streets of Talkeetna that were very busy with tourists. We saw many large busses that had Cruise Line names. Talkeetna is a stop on their inland bus tours. 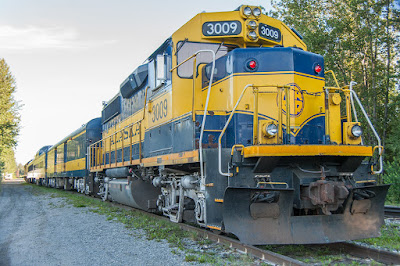 We choose not to take the train ride since we see so much as we drive, and we had just taken that great boat ride. It would have been easy since the train station was adjacent to our RV park. 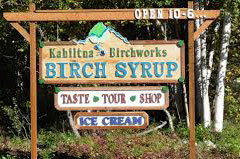 On one of our wanderings we stopped out at the Kahiltna Birchworks  to taste and buy some birch syrup. I thought the 8.4 ounce bottle of first run syrup that we bought was a bit pricey at $35. But it is very good and everything seems to cost a lot in Alaska. 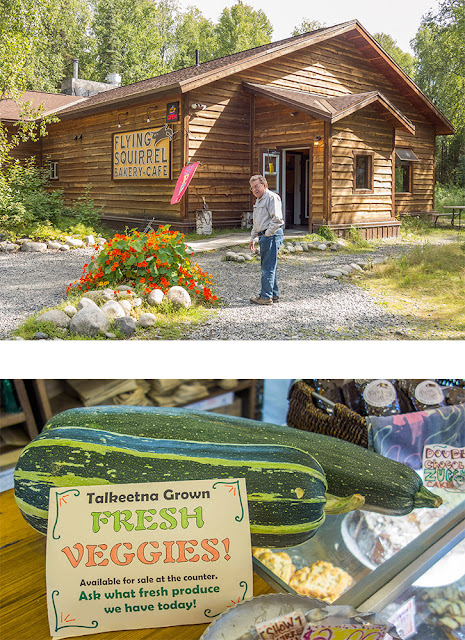 Another place along the Talkeetna Spur, that has a fun name,  is the Flying Squirrel Bakery and Cafe.


We bought a very nice loaf of olive bread, and were properly amazed by the display of giant Talkeetna-grown zucchini.

Another curious site in Talkeetna is the Susitna Salmon Center.  Out front is this remarkable tower of glittery tile salmon sculptures.  No we don't know what kind of fruit is on the tree. 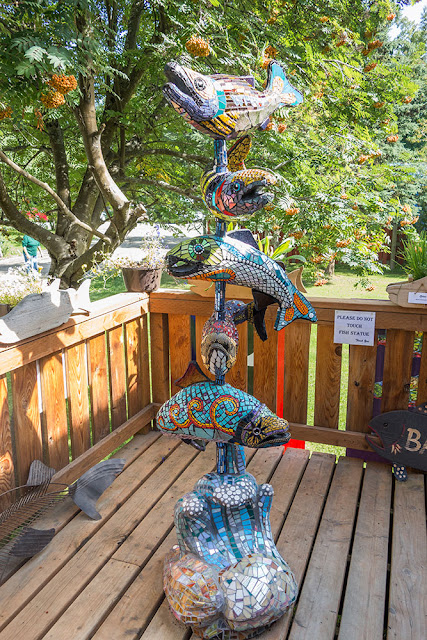 The best feature of the Salmon Center is a video story of a salmon that got tagged with a radio frequency transmitter, on its way into the Susitna River.  By monitoring the transmitter, salmon trackers followed this "Super" fish as he ignored all the side tributaries that other fish were going into to spawn, until he reached the glacier at the start of the Susitna.  He then turned around and swam back down the river until he reached the tributary in which he was born, which he had missed while swimming up the river.  He entered and presumably happily spawned.  Full disclosure: the real purpose of the film is to rouse opposition to a proposed dam on the Susitna.

To emphasize how lucky we felt to have had that beautiful clear view of Denali last Saturday, the above pictures were taken on Monday and Tuesday. The skies have remained mostly blue during the day, with overnight rain showers, but there have been clouds around Denali every time we got a glimpse of her. I think the flights would have been pretty good in spite of the clouds. Maybe even more interesting. Wednesday and Thursday were quite cloudy, and Friday the sky was totally socked in and the day started with light rain.

One warning I do have for anyone who wants to camp in Talkeetna. Do your grocery shopping before you come.

I had Googled "grocery stores" in advance, and came up with what looked like a bigger store, Cubbys. But it turns out that  it is 14 mile away, at the junction of the Spur Road and the Parks Highway.

The only little store in Talkeetna, Nagley's, is tiny and although it has a few  emergency supplies, and foods like pasta sauce and frozen bread, it is not much of a grocery store. It does have wonderful ice cream cones however.

We left Talkeetna Friday morning and drove to Fairbanks, 280 miles away. The morning rain let up by mid-day, but we were not able to see any of the mountains because they were obscured by clouds.

Shortly after arriving at the River View RV Park in Fairbanks, we discovered our hot water heater had a leaking incident. We have a call in to a mobile RV Service Company, so we hope someone can take a look at it, and fix it quickly if necessary.

Oh well, a hot water heater might spring a leak in a house as well, and of all places in Alaska to have this happen, Fairbanks is a lot better than most of the small places we have been.