We really haven’t done much hiking this summer. It seems the rain is always just a few hours away, and we hesitate to go far from shelter.

On our first day in Denali we stayed at the Riley Campground, close to the entrance. We walked about a mile and a half from our campsite to the Visitor Center, and then back again by a different trail. I guess that counts as a three-mile hike. 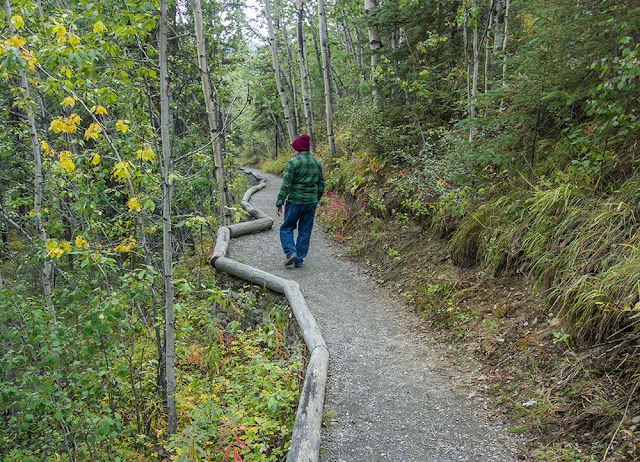 It was an easy path, and as you can see, a few of the trees were starting to show fall colors. We had noticed this up in Fairbanks a few days before. The air has also had a bit more of a nip. It is mid-August, and autumn feels like it is coming quickly in Alaska. 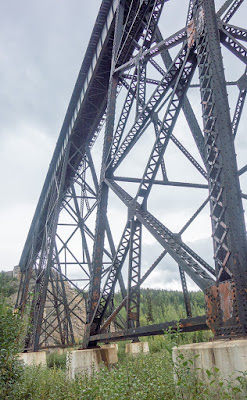 The trail went under the railroad tracks. We have heard and seen the Alaska Railroad that runs along here many times in our recent travels. 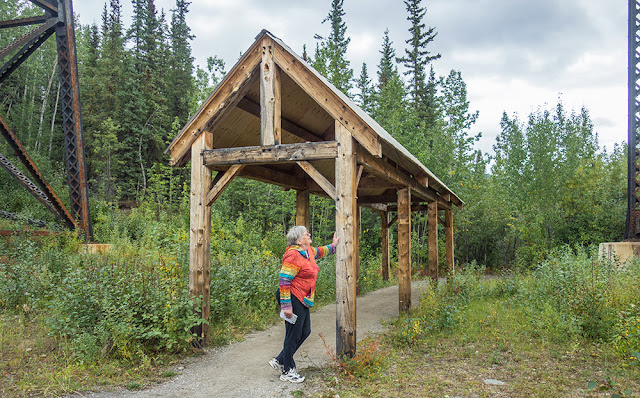 We wondered why this structure was here, over the trail under the bridge, and decided it must be to protect hikers from things falling from the train.

Our second short hike was on the first afternoon we were up at the Teklanika campground. 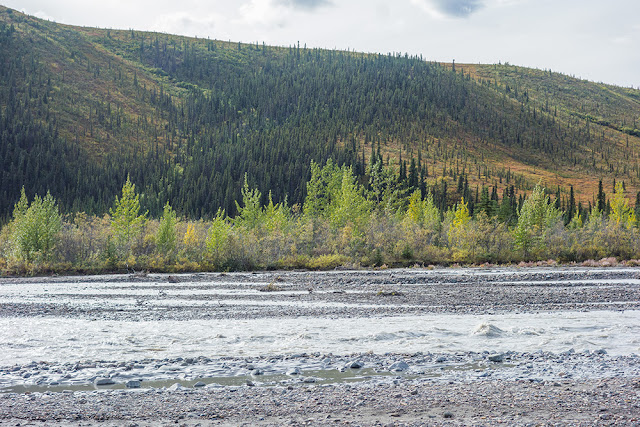 We decided to take a quick walk along the gravel bar of the Teklinika River which was just beyond a tree line from our camping loop. This was where I first noticed the broad yellows and oranges starting to show in the ground cover, and the much lighter greens of some of the deciduous trees. It reminded me of hillsides covered with wildflowers in the spring, just large masses of color. 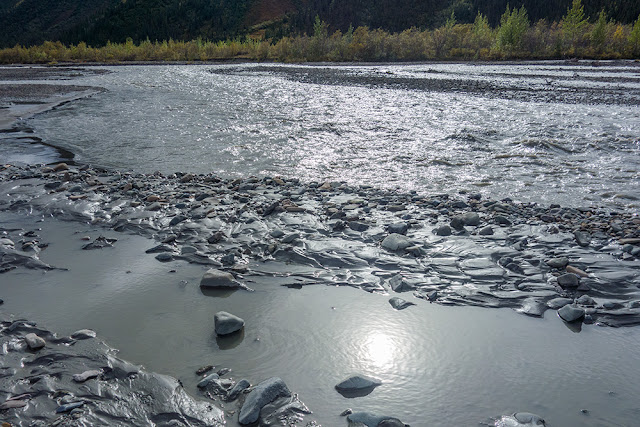 The river water was opaque with silt from the glacier feeding it, and the low sun gave it a metallic glow. 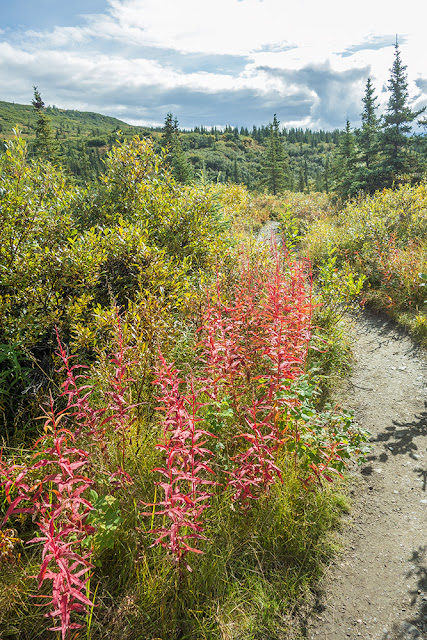 On our fourth day in Denali we took a rather short hike along a trail near Wonder Lake.

We have been seeing the seasonal change in the Fireweed which is common along the Alaskan roadsides.

When we were in Valdez we were told that summer had not yet arrived because the Fireweed had not yet started to bloom.

Then when it was blooming we were told summer ended when the top flowers of the plant had opened and dropped, and the leaves turned dark red.

The trail started out very narrow and wound through dense blueberry bushes. 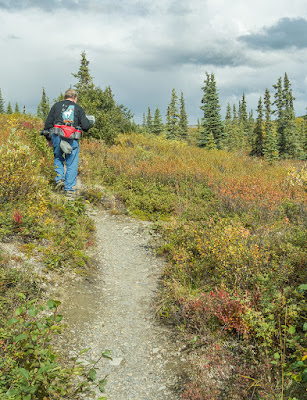 For days we had been lectured about what to do if we encountered a bear on the trail, and about how much bears loved blueberries.

We had been told that "bear bells" were not recommended for Grizzly bears, since it seemed they attract rather than discourage them.

We were told if we came upon a bear we should back slowly away. But how? This path was very narrow, windy, with many stones and roots one could trip over, trying to walk backward.

I felt a bit apprehensive to say the least. 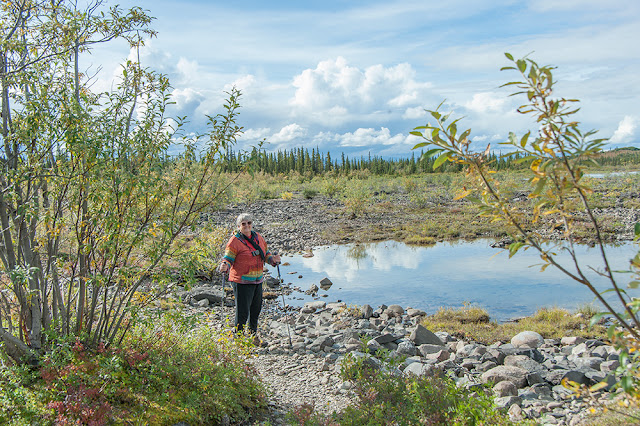 Then although the trail remained narrow, the surrounding landscape opened up as we came to a large gravel bar, dotted with smaller pools.

We ended up turning back at this point rather than walking all the way to the lake. We did so for several reasons. The stones on the path became increasingly rough. Although I had my poles, I felt my ankles were in danger with  every step. Craig was not very comfortable because he had worn his regular shoes rather than his sturdy hiking boots, and finally the fluffy white clouds were turning dark and we could see rain falling across the valley. 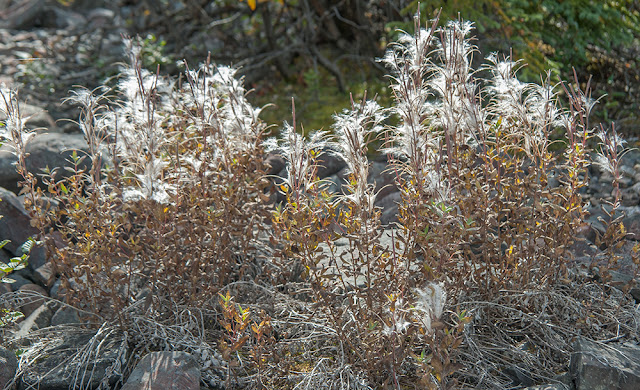 Along our return path we noted more signs of Autumn. 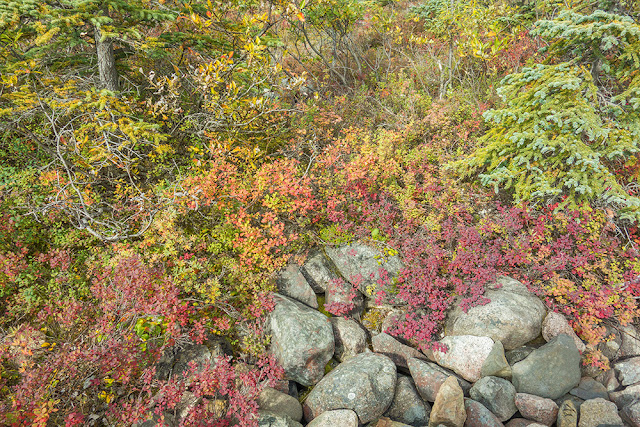 This type of ground cover is called tundra and goes on for miles. The tundra looks a bit like it has vast swatches of red and orange wildflowers,  but it is all low growing brush and plants. There is very little actual grass. 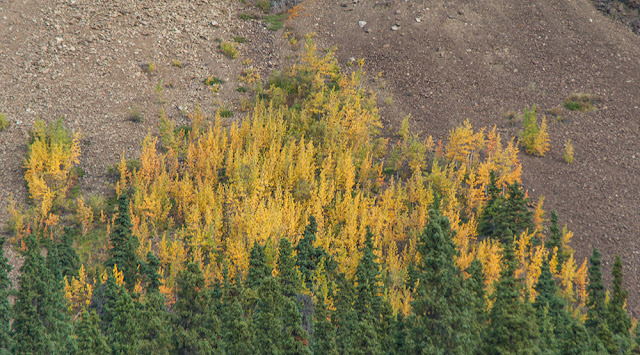 Finally, as our bus drove home from our walk at Wonder Lake,  I asked Craig to catch a picture of this remarkable stand of Poplar trees blazing gold on the side of an otherwise barren hillside.

I have much more to share about the things we saw in Denali National Park, but they will have to wait until my next post.

Winter may be coming on the Game of Thrones, but in Alaska it is still only August and it is fall color that is showing!