The Best Of Denali

I thought I’d start this post about our days in Denali National Park with the best wildlife pictures we were able to take from the park bus.

Wildlife on the roads were far more common in the past when people fed them. But now the bears still like to take the easy path, and ramble down the roads instead of crashing through the tangled brush. We were lucky to see these three: 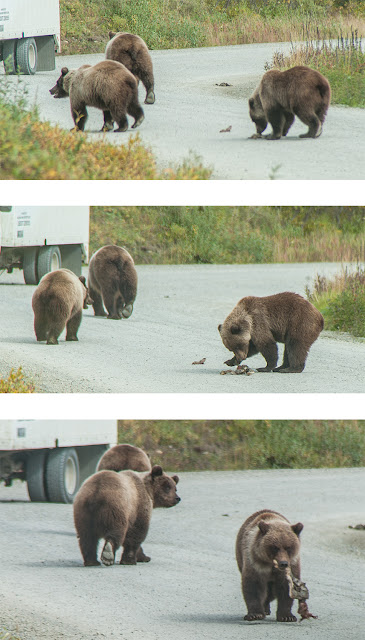 Bears are generally solitary animals except for mothers with cubs, and pairs during the mating season. These were probably a set of three year old siblings, who had left their mother this summer, and were still hanging out together.

They are opportunist omnivores and will eat almost anything. They were carrying around the carcass of a snowshoe hare. 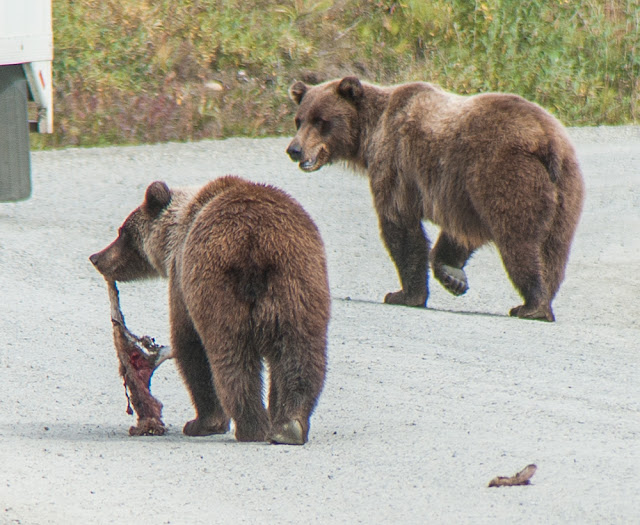 This one had possession of it, and after tearing it up a bit, he eventually left with most of it and moved on with the others, leaving a scrap or two on the road.  A magpie quickly took advantage of this nourishing find.

Most private vehicles are only allowed to drive 15 miles into the park. We were allowed to drive the Alfa in 30 miles to the Teklanika campground where we had made reservations eight months ago. 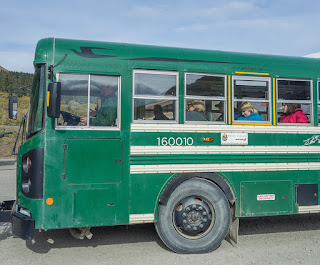 We  also purchased our bus tickets in advance ($34 each), and because we were at the campground we were able to use it on multiple days, which we did.

On Friday and Saturday we spent a total of fourteen hours on the bus, broken up by a few rest stops and one short hike.

The bus seating is very tight, and the double windows are sometimes hard to see out of, particularly when most of the 48 passengers are up trying to take pictures out of them. But it is one of the only ways for the public to see the park.

The following pictures are the best of those Craig was able to take with his Nikon D3 and Tamron 28-300 lens. They have all been cropped.  The animals are more clearly seen here than what I could see, since they were all very far away.

To see this mother grizzly nursing her two large cubs on a hillside was a very special treat.

The cubs appear almost as large as she was, but probably weren't.

As distant as most of the animals were, it was good to see them living their natural lives in the wild.

However, I am very glad there are places like the Alaska Wildlife Conservation Center near the Alyeska Resort, where we were able to see them up close.

Sometimes we weren't sure what something in the distance was. Was that a bear or a bush? Is that white spot a rock or a sheep? Can you find the critter in the above picture? 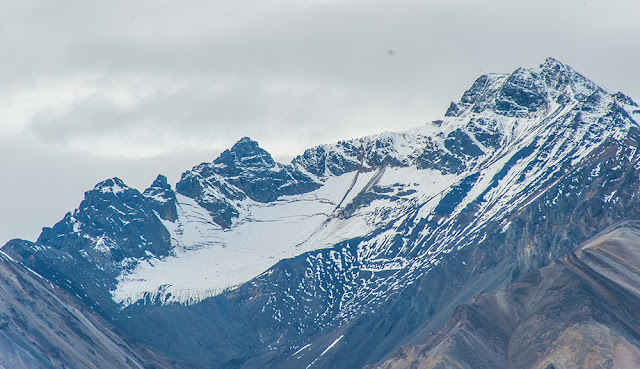 If you look closely and use your imagination, you may be able to see the giant Alaskan mosquito that crashed in the snow on the side of this mountain.

It was very hard to limit the number of images I put into this post. The landscape was so vast and beautiful, and it seems no pictures can compare to what my memory has stored. 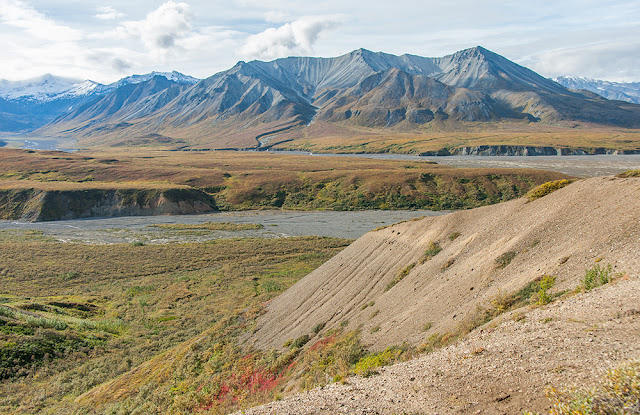 In the above image you see a sweeping view, and yet it is only a small portion of the panorama. 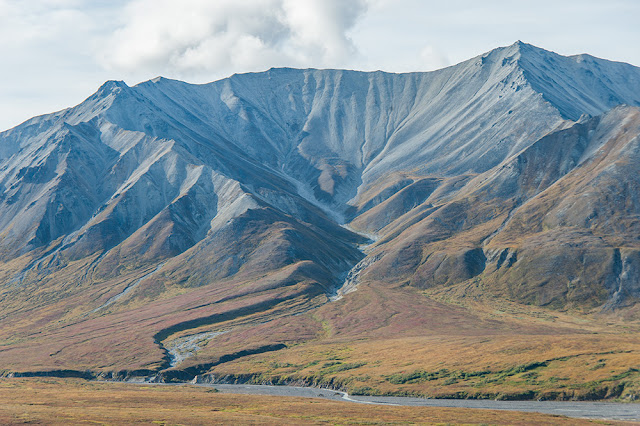 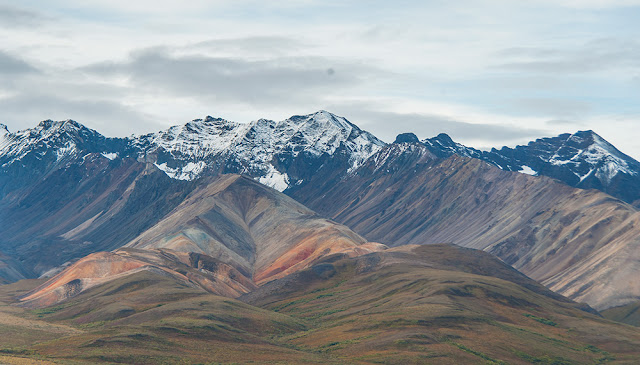 Here's one of the Polychrome Mountains.  They still, or is it already, have snow in the high country. I could have posted twenty more, but you just have to come here yourself. 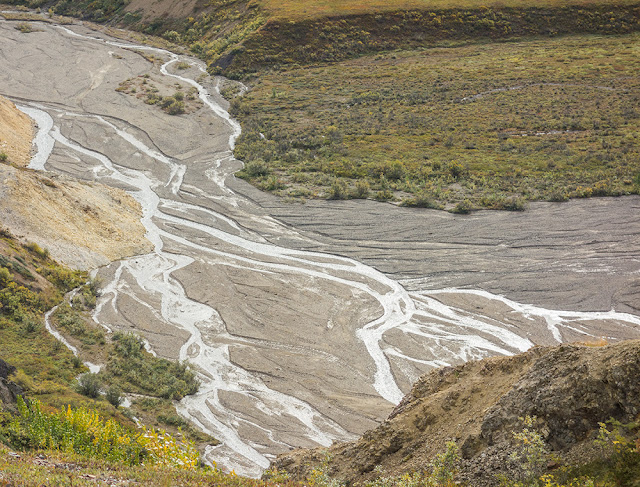 Also fascinating were the places where the road pullouts overlooked vast gravel river bars. The water takes many paths giving them the name  "braided" rivers.  Their water flow varies with the seasons and rainfall each year, and the overall riverbeds were laid down over thousands of years as the glaciers receded.

Visitors to the park come hoping to get a good sighting of Mt. Denali. It was interesting to see its many views. There were times when it was completely hidden by solid overcast skies. 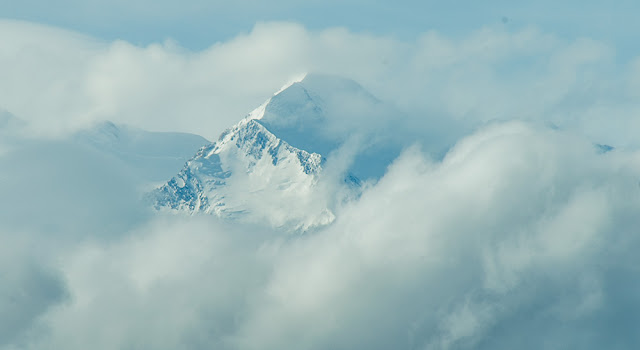 There were times when only parts of her were visible. The above image was  zoomed in and later cropped. 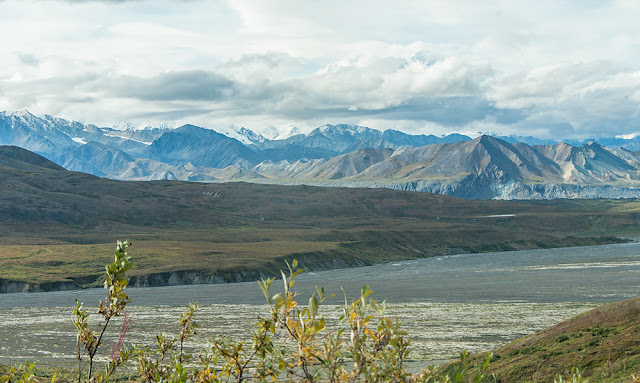 This was taken from the same place at the same time, and shows the complete scene as we really saw it. As you can see the mountain is very far away. 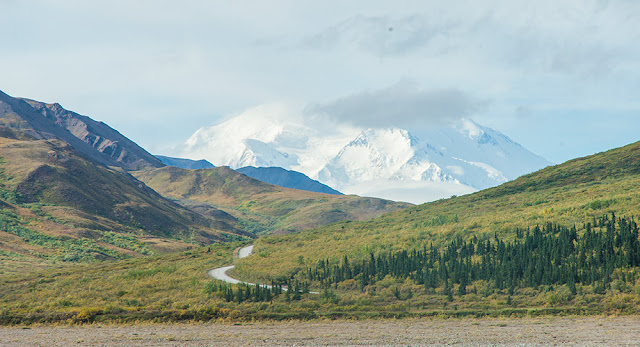 As we rode along, Mt. Denali would disappear behind other mountains, and then on a turn suddenly loom largely over the distant horizon.

Another good sighting!  But every time she came into view, I felt a renewed sense of the good luck we had had that day on our jet boat ride and our flight from Talkeetna. Such wonderful, visual memories to have.

Our days in Denali have come to an end. Our days in Alaska will soon be over. We are headed back to the lower 48, but we will always treasure our time in this distinctive place.

And so to renew a charming tradition of an old blogger friend, Judy Bell: 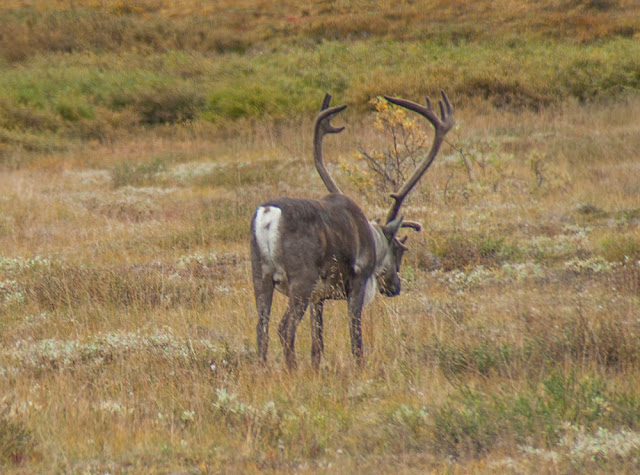