I switched to using Firefox instead of Safari and it is working better. So I guess I will keep blogging.  Note: All of the images in this post are from the web.
We have arrived at Bandon By The Sea RV resort, our home for the next month!  The air is cool and the sun is shining.

There are three ways to drive from Southern California to Oregon. We have used all three.  Both US 101 on the West and CA 135 on the East have some nice scenery and are two lane highways in most places. They are good for leisurely travel. 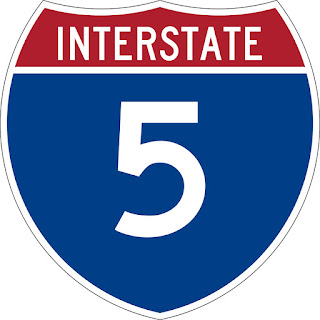 But the most efficient is to drive straight up the middle of the Central Valley on I-5 which is divided and fast moving. For this trip we drove the 5 because we just want to get to Oregon with only overnight stops. By making our reservations ahead, it has been a "no-contact" experience. I booked pull-through sites at all three of our stops so that we could just pull in and out without the hassle of unhooking our Jeep.
Although we bypassed most of LA we still had to deal with LA suburban traffic, which demands extra care and patience. Craig and I took turns getting through it. 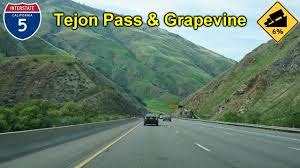 Just North of LA is a steep stretch of highway called the Grapevine, that goes up and through the Tejon pass. Although we have driven it many times in the past, both with a car and with the Alfa, it remains a "white knuckle" experience. The grade seems like it will never end, and even with the pedal floored, in the Alfa the speed fades down to 35MPH. As we climb, we keep an  eye on the engine temperature, and breathe a big sigh of relief when we finally get over the summit! 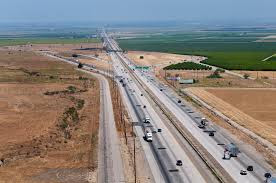 Coming back down the long 6% grade, we are very glad the Alfa has an exhaust brake which saves the regular air brakes. To me one of the neatest sights is the view of I-5 stretching straight out into the vast Central Valley.
Knowing we had to drive almost 1000 miles, I planned on not driving more than 300 miles per day. Our first day was even shorter because we had to drive through LA traffic and over the Grapevine. 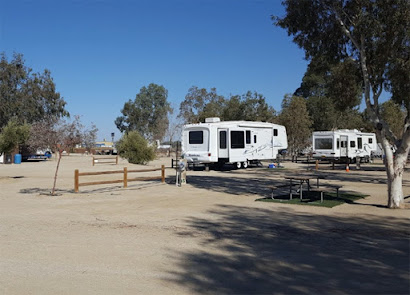 Lost Hills RV Park, which I choose to stop at, has seen much better days but it was conveniently just off I-5. We were glad the 50 amp power worked since the daytime temperatures were around 103°.
On our second day driving up the valley, we saw many large fruit and nut orchards, some cotton fields, a few oil rigs, and one feed lot that we remembered from the past. It seemed to me that there were far fewer cows in the feedlot than in the past. 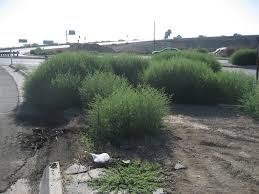 Mixed in with the irrigated crop land were large swatches of fallow desert land. The tumbleweeds are quite green at this time of year. I'm more accustomed to seeing them brown, dry, and rolling along or piled up against the fences.
Our second night was spent at the Yolo County Fairground RV Park. It's not much more than a parking lot, but does have power and water.

When we got up in the morning I was surprised to see that the field across from us, which had been empty the night before, was parked solid with cars and with many more were pulling in. I wondered what was going on. 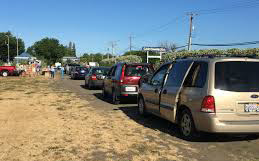 When they started to line up and move in a slow line, stopping at a tent on the side, I realized what I was seeing was people receiving food from a food bank. The people in the hundreds of cars parked in the field had come in during the night and slept in their cars so that they could be in line in the morning. I knew this is happening, but to witness it on a beautiful summer morning is disconcerting. It made think of the bread lines in the 30s. The government must help our people. They did not lose their jobs because they were lazy or bad workers. Many of us have had times in our lives that we were living paycheck to paycheck. We should not turn a blind eye to this. No family should go hungry in this country.

As we drove north the agriculture changed to rice fields and almond ranches. The road was good, and our ride was smooth. We had to cross over another mountain range in Northern California. Not as hard as the Grapevine, and quite beautiful. You can see Mt. Shasta from I-5, and there is still some snow on her.
Night three was spent at the Southern Oregon RV Park, a Jackson County park in Central Point, just north of Medford Oregon. We were able to get propane for only $1.99 per gallon, and Diesel for only $2.24 per gallon. Much better than California prices!
Our fourth and last day drive was quite beautiful. We only had about 165 miles to travel, but it took us over the Coastal Range mountains and involved some winding ups and downs.
As I write this it is 68° outside. I just checked Jojoba and it is 103°. The birds are singing in the trees here at Bandon By The Sea RV Park. I think it is going to be a nice month.
Posted by Merikay at 9:40 AM