I wanted to go back and have a picnic under the tree mentioned in my last post, so on Sunday we picked up some Subway sandwiches, parked the Jeep near the tree and set out to walk to the Bandon Lighthouse.

I didn't realize how far it was! 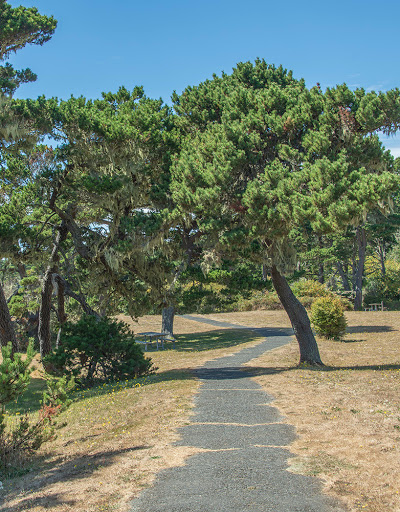 The path was smooth and paved for about a mile. We then got to the beach access and had to walk along the side of the road for another mile and a half to get to the lighthouse.

We could have gone down onto the beach, but it was very windy. 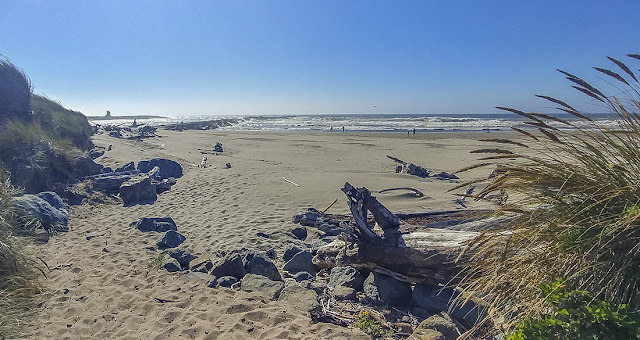 When we got back to the car, someone else was using the table, so we went to another table and had our picnic anyway. 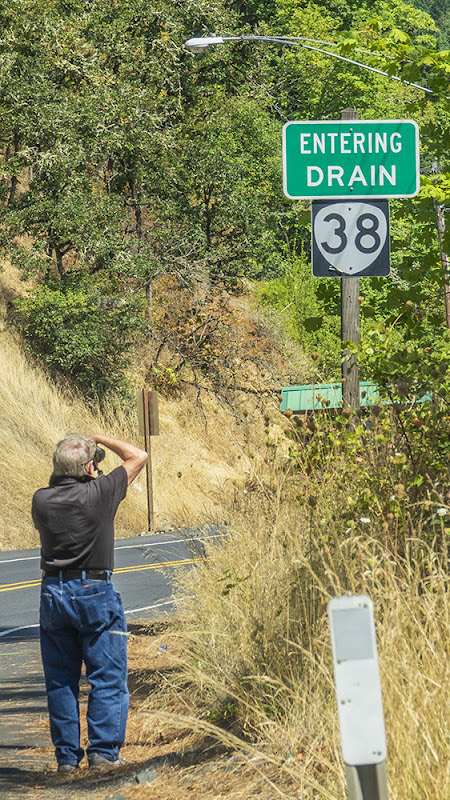 The next day Craig went to Eugene for something. On the way he went through a small town named Drain.

When you are retired, I guess you have time to stop and take pictures of signs along your way.

When we first arrived in Bandon, I did a bit of research and made note of several inviting hikes. We have done all of the "Easy" ones that were at least two miles, and I had one more on the list, the Simpson Reef Loop Trail. Listed at 3.2 miles, I didn't really notice the "moderate" rating. 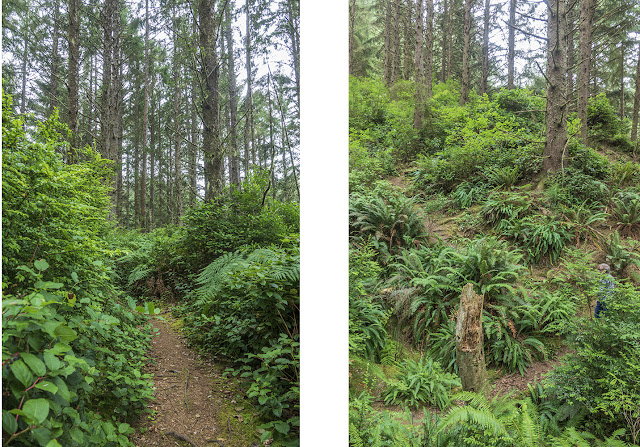 Starting just across from the Simpson Reef Overlook, the trail was pleasantly level and wound its way through lush ground cover. But it quickly turned into a rather steep climbing trail. If you look closely at the right hand image, you can see Craig amidst some large ferns. 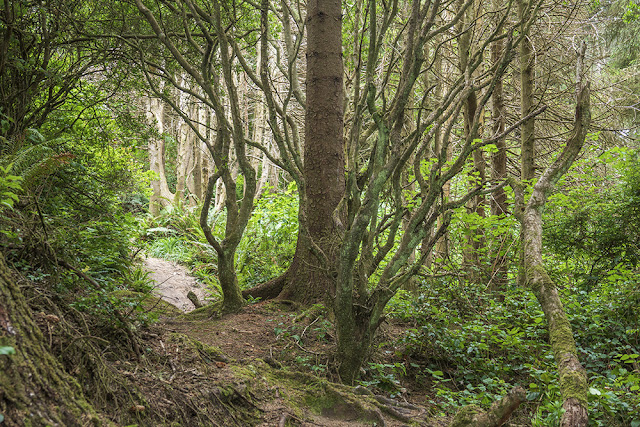 In many places there were more roots than trail, and I had to watch my step to avoid tripping. The trail just kept going up, up, and up. I noted later the elevation change was listed at 610 feet. (OMG! That is equal to a 61 story building.) We felt we had made it to the highest point after about a mile and started going back down. But this turned out to be going down to a creek bed before going back up again.

Eventually we did start back down, and that proved to be a bit bothersome to my old knees.  Benches were nonexistent, and even suitable logs or stumps to rest on were far and few between. 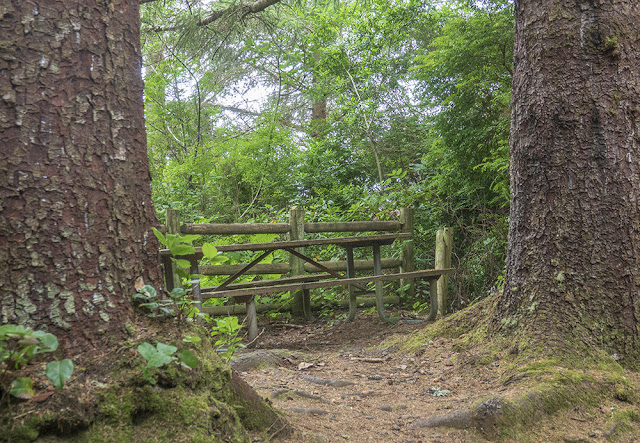 Just as my legs were screaming, my knees ached with each downhill step, and I wondered about my sanity for choosing this hike without thinking about what "moderate" meant, we spotted a picnic table tucked in behind two very large trees.

Wishes can come true. We stopped, ate our sandwiches, and rested a bit before going on.

A little further on, we spotted a strange, colorful, ruin just downhill from the trail. We could see it was built out of concrete blocks, and was made up of several roofless rooms. 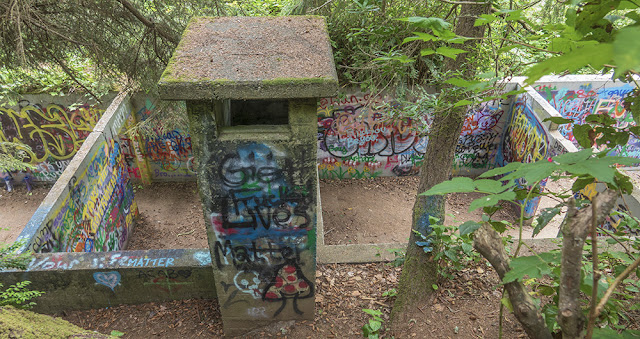 We went on, and came to a short path that led to it. It was very strange in that it was covered with many layers of graffiti, most of which was not "nice", and at the same time the floors were clean of anything other than forest debris. I would have expected the sexually frustrated taggers would have left it full of empty beer cans etc. Perhaps the Park Service cleans it out from time to time. 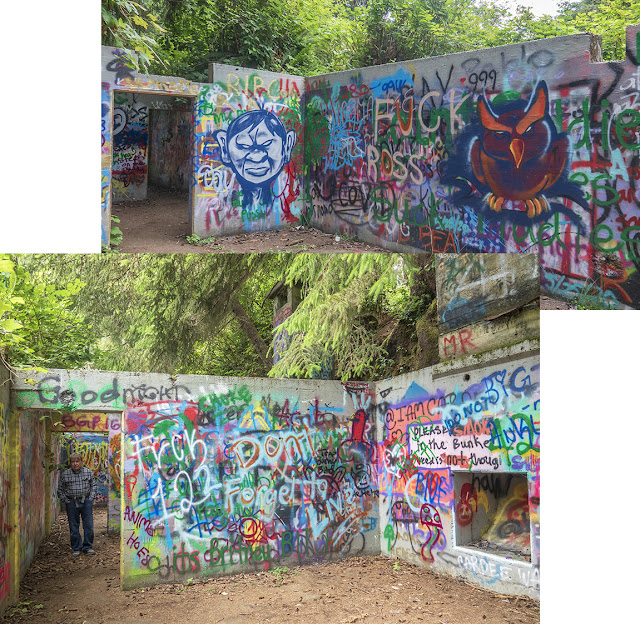 Later, thanks to Google, we learned it was an abandoned  WW2 bunker.

The forest part of our hike was almost done. 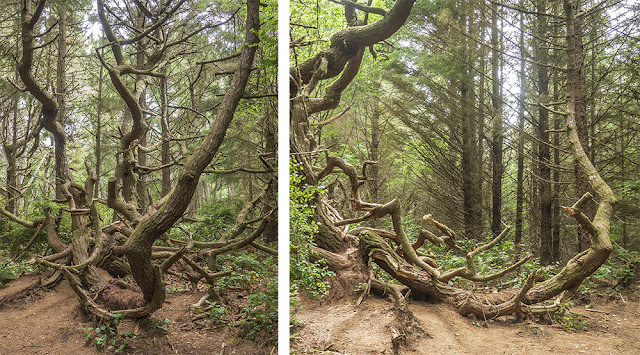 This had to be the most tortured tree we have ever seen. But in an area with an ocean inlet named "Devil's Kitchen" and a road called "Seven Devils", perhaps this was the "Devil's Tree." 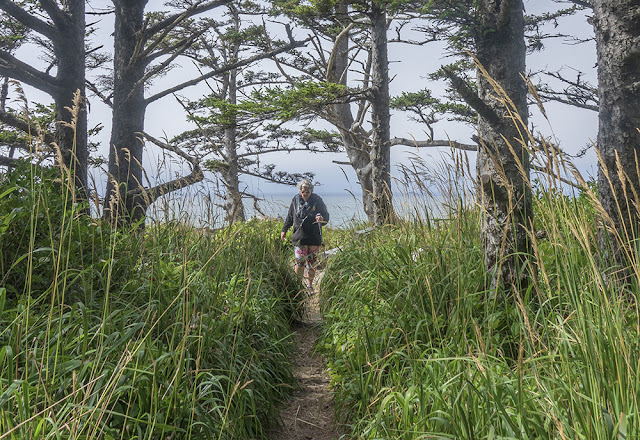 Once it crossed the road, the trail became much easier as we hiked along the top of the cliffs overlooking the sea. 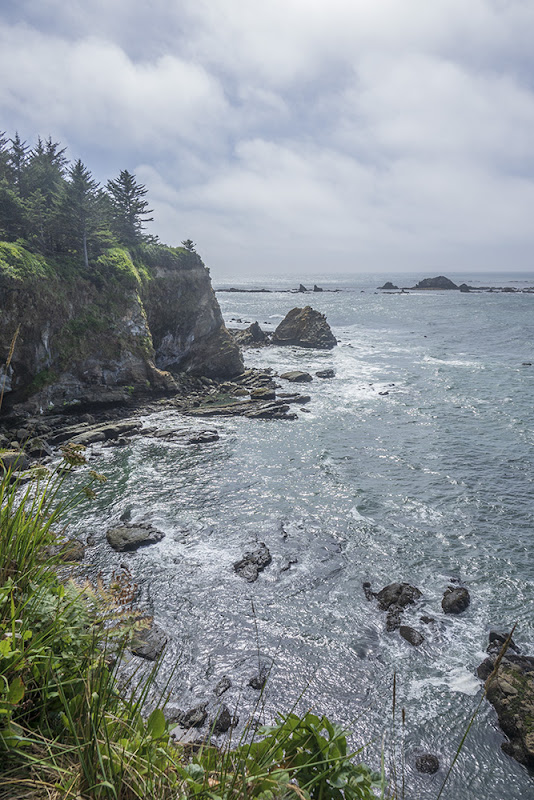 The views were breathtaking.

We finally made it back to our starting point at the Simpson Reef Overlook. At the start of our hike, the fog was thick and we could not see the water below. But we could hear a lot of seals barking in the distance. If you look just below the largest rock in the image above you can see a small beach packed with seals. This is about how we could see them with the naked eye. 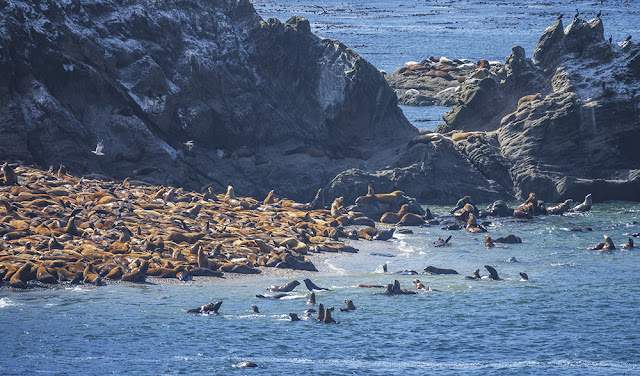 But, thanks to the power of a 600 mm zoom lens, the scene looked like Miami Beach before COVID-19.

Needless to say, I was wiped out and took a nice nap when we got back to the Alfa. We will be in Bandon for a couple more days, but I think this was our last planned hike. But, as I write this the next day, I feel fine and I am wondering what easier hikes we can find around Port Orford next week.