Many of you know that we drive an Alfa, manufactured by a company that went out of business in 2008.  They have always been a brand with many fans, but are slowly going away.  But by the end of the three days, we were sharing the Washington State Fairgrounds RV Park with four other Alfas.  I often wonder if owners of other brands smile when they see their own brand. 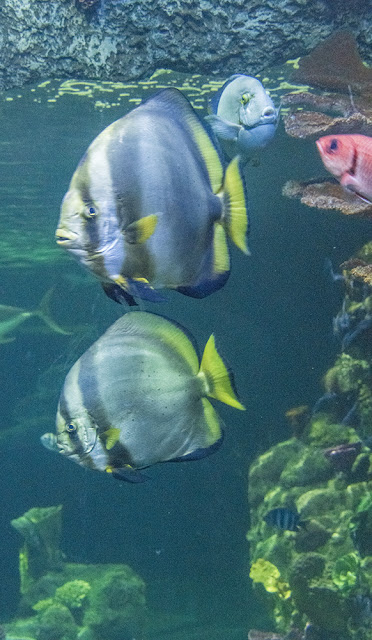 On Thursday we went to the Tacoma Zoo and Aquarium. It wasn't the best we have been to, but since it was our first real activity in over a year, it was good to be out.

We did make a parking mistake, and ended up walking (uphill) for quite a long way before we actually got to the Aquarium. I was not a happy hiker.  Too hot!

But the fish were pretty cool, and with limited admissions it was the least crowded aquarium we have ever been to.

These two fish reminded me of us. I'm the bigger one on top, but Craig is a bit round too after our inactive year.

Our goal for the summer is to get more exercise and eat less. The extra walk was probably good for me. Now if the weather would just cool down a bit! 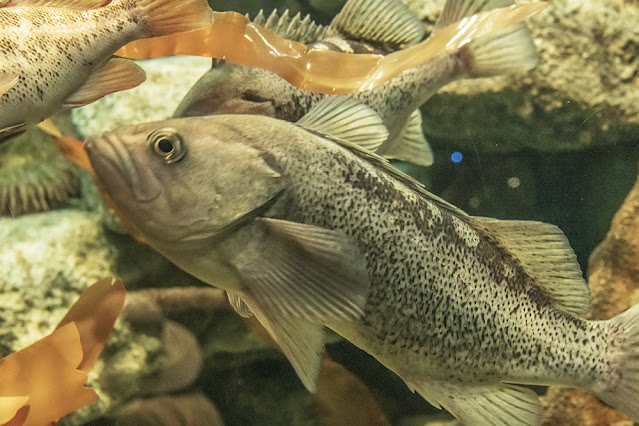 Craig was not a happy fish Friday morning. He had a new problem with the dump valves that we had had repaired a few days ago. 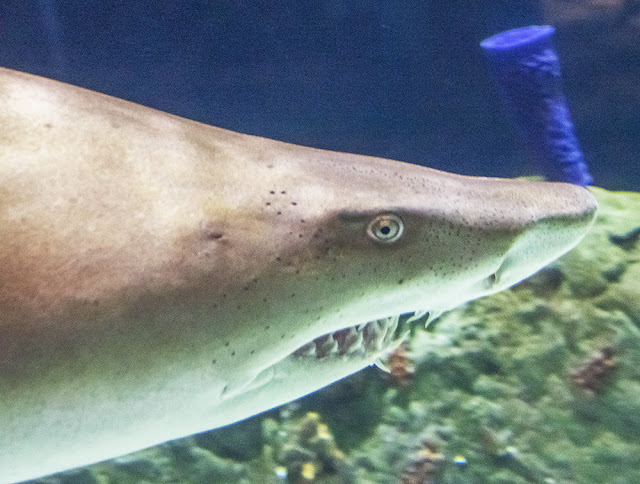 I was not in the best mood either when he asked me to try and find a repair place. Everyone I called was booked for weeks if not months out.
The problem was that he could not get the gray tank valve to open so he could empty the tank. I kept making calls and he kept trying to get it open. After a while, it opened, he dumped the tank, and we were on our way.

Driving in any metropolitan area is no fun, and Seattle is no exception. I got to drive so that Craig could catch the "start of US 2" image below.  I just kept reminding myself to keep calm and be patient. 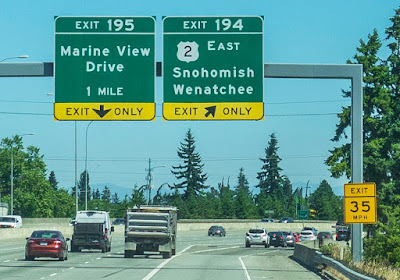 We both smiled when we saw the sign for the turn onto US 2 East.

We were really ready to say goodby to I-5.

We were now officially on a road we have never traveled. US 2 goes from Everett WA to Mackinaw City MI. While some of it is a divided highway, mostly it's a 2 lane road that goes through many small towns and scenic country.
The first 50 miles or so were beautiful. The high country of the Cascades is covered with lush forest. The alpine meadows are still the greenest green you can imagine, and we traveled along the fast-flowing Wenatchee River.
We are now in Cashmere, Washington. It is on the east side of the Cascades; the landscape is dryer and trees are quite sparse. It is going to be very hot here for the next few days. I doubt we will go out much, but the Alfa is cool and comfortable and we heard there is a great BBQ place in town.
[From Craig] The white water of the Wenatchee River was exciting to drive next to.  It was so captivating that I had to force myself to keep looking back at the road.  So if you come this way and have two drivers, let the one less whitewater-oriented drive the stretch along the Wenatchee.
Posted by Merikay at 6:10 PM