Everything Going Smoothly - and find the hidden Alfa

Sometimes the moon doesn't have to be full, or the sunset briliantly colored to be peacefully beautiful. 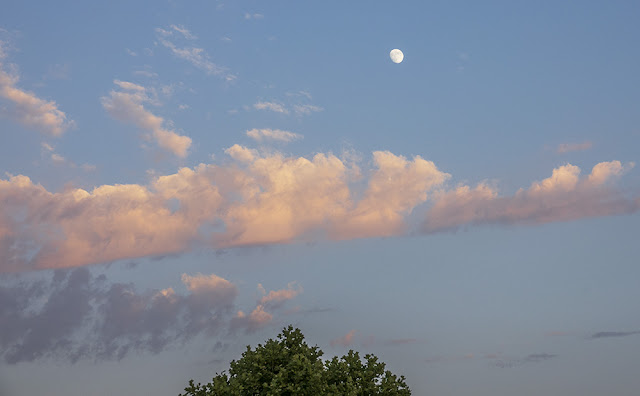 We seem to notice more sunset skies as we travel than we do while in Jojoba. There our western view is somewhat obstructed, and only the more spectacular colors are noticeable. 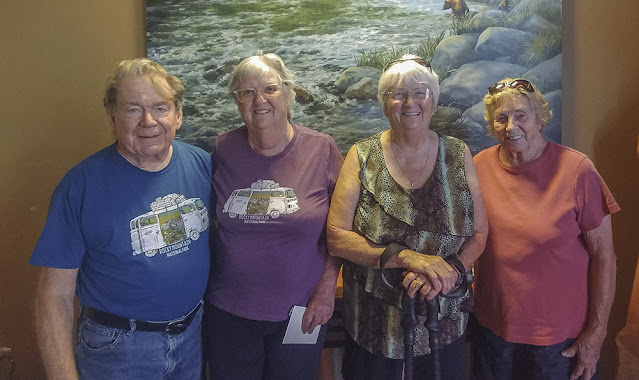 One of the joys of fulltime RVing is being able to vist RV community friends we have met over the years. When we were in Grant's Pass Oregon we met up for a nice Sunday night dinner with Sue and Mo, a pair of delightful ladies we met through our mutual blogs. I hope to see them again the next time we come this way.

It is always good to take care of a maintenence problem before it becomes a problem. Recently, Craig noticed the black tank valve was leaking a little when he dumped. Knowing we had an easy travel day on Monday, I called around about a week ago and found an RV place that would shift their schedule so that we could just drive in, get the one hour valve replacement job done, and be on our way. South Country RV Repair, in Myrtle Creek, did a good quick job of it. The tech also noticed that a row of screws had broken, so that the lower part of the side fiberglass was no longer firmly attached to the frame. They fixed that too and charged us for 1/4 hour labor to do it. Always good to know you have a tight bottom!

I had planned on overnighting at Timber Valley, the SKP park in Southern Oregon, but they do not take reservations, and all they had available when I called that morning, was in their boondock area. Since the daily high temperature was still hovering around 100°  I called our planned alternative, the Polk County Fairgrounds, near Salem to get a space for the night. We have stopped there before and I knew that there were no events going on, and so was sure we could just drive on in. However, since they have locks on the power and water it is a good idea to call before the office closes for the day to let them know you are coming.

Craig sent me out to take this picture. Notice the big space between our Alfa and the Rig to the left. He called it "Social Distancing for RVs". It is a very basic place, but it did have water and power for air conditioning. For $25 a night with no reservation needed, it was great for an overnight stop.
Note: We can boondock in the Alfa, but prefer to have power when it is so hot. I don't mind listening to the generator running for a few hours in the morning, but not at night. We did consider solar panels in the begining, but knew we wouldn't be boondocking enough to make them worthwhile.

Alfa owners: There are three Alfas here.  Can you find them all?
Tuesday's drive of 210 miles, was to Puyallup Washington just east of Tacoma. The Washington State Fair Campground was totally full, but we had reservations. It is not a "pretty" park, but it is convenient to a couple of urban things we want to go to.
We tried to go to a farmers market on Wednesday, but it wasn't open. Thursday we are planning on a trip to the Aquarium in Tacoma, and a stop at Trader Joe's.
Friday is another "drive day", the last on I-5.
Posted by Merikay at 2:13 PM