This morning I  glanced out at the meadow outside my studio and saw  a bobcat  sunning himself. I think he was half asleep!

I only had the point and shoot at hand, and it was hard to aim as I tried to be quiet sliding open the patio door. 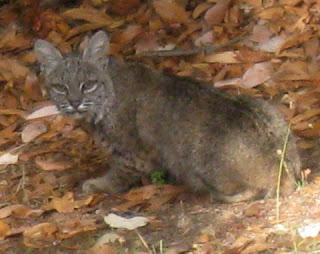 And he was gone!
This was the first time I have seen a bobcat in our yard.
I knew they were around, but I have always had a dog or two.
My own little piece of wilderness.
Now for the less interesting part of the blog:
My home improvement today was a trip to the dump with a half of van load.  I totally agree with some of the full timers that say this is a liberating experience.  Of course most of what I took was simply trash that would have gone anyway.  Odds and ends of drywall, painted wood scraps, etc.  But some was "stuff."
All of it out of the garage areas.  Craig was home when I was loading, so he knew what I was doing.
The other day I was working on the attic and came across a large box of coral from Craig's fish tank days.
Twenty six years and two moves ago.
That evening I started to tell him about it when he said "stop!"  "I don't want to know."
So, I said "OK, I won't touch anything of yours."
"No."  He said "Do what you have to with it, just don't tell me."
I get a little pissed and a little depressed when he does that.  It is such a cop out.  I think it's his way of not helping with the work.  But I also know him well enough to know that if he says he doesn't want to know, that is exactly what he means.  So I'm stuck with all the purging.  And since he sometimes reads my blog, he will know.
The Coral?  I want to photograph it and try to sell it on E-bay.  I doubt I'll get much, but it is shippable in those post office one price boxes.
On the other hand ... He really worked hard on his part of the painting again yesterday.
And ...
After several years of needing new glasses he finally got two new pair.  (His old ones were crushed by a log when he put them on the ground next to the firewood rounds we were loading into the van a few weeks ago.)
Why two pair.  One is a pair of bifocals,  and the other is for just distance.  He told me they were going to be much better for driving the big RV.
Exercise Goal:
1000 miles on the treadmill,
2 miles today
Total walked = 194 miles
Someday I will be hiking 1000 miles in National Parks!
Daily countdown:
390 days, or 1 year, 25 days.
Posted by Merikay at 3:21 PM