NOTE: The following occurred with humor, but also with a touch of truth.

Among the treasures we have moved from place to place for 46 years, was a foot locker type chest that I believe Craig must have used to take his things to college in the 60's.  It was not "quality." It was made with some sort of laminated pasteboard and had a torn wood grain paper lining. The hinges were rusted. It smelled. I put it out with the trash cans for this morning's pick up.

Last night after dinner I tied up the last load of kitchen waste and was going to take it out to the cans.

He comes back in  "You are throwing away my good chest. "

"You could put it out in the sun" he says hopefully. "Wouldn't it be perfect for  storage in the RV?"

I harden my heart and answer "They have big plastic see-thru bins for that."

"Oh" he sighs,  "Another of my family treasures gone." And made a sad little boy look and went back to reading his book.

I do believe this was just in fun. 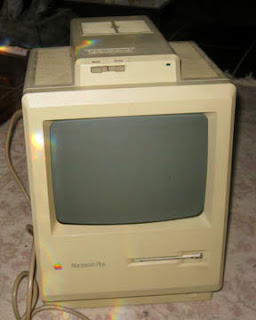 BUT, he does read my blogs, and my mention of the computers opened another issue.

I put most of the items I plan on taking for the electronics recycling next to the front door.  The old Mac was in a box.

This morning he asked about it.  I showed it to him and pointed out that I had seen dumpsters full of the same type of machines at recycling events in the past.  It is NOT unique!

He agreed to let it go, but said it would haunt him all day thinking about old computers piling up in a dumpster!

So sad. But if people didn't keep upgrading he would not have a job!

Then he asked about the old Terminal.

It was heavy and after I unwrapped it to see what it was I put it right into my van.  We looked at it and he says it goes with the other machine he wants to donate to the computer history museum. At some undefined future date .... 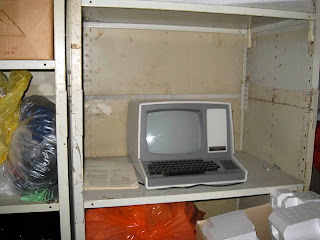 See Dear, it's back on a shelf in the garage.
I tucked plastic around it after I took this picture.

Meanwhile, The guy came and bought the wine press and another is coming for three car boys later today.  Another $120 in the kitty. Thats the kind of progress I like.