I had six items on my to do list today.

I accomplished five of them:
The sixth item was to set up the sewing machine and work on a new pair of PJ's for Craig, but then when I found an order for four more animal sculptures in the email, I decided to go the first step on them instead.

It was a busy, but productive day.

Oh, about that RV with the sky deck,  It is a large Class A from Airstream and apparently it is a regular production feature.  I can imagine it being used by a business of some sort for promotional parties!  Great for parking along a parade route! 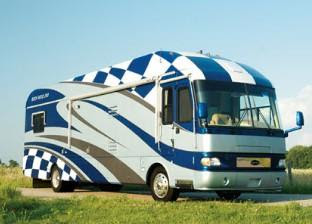 I walk to remind myself that I will reach my goal by taking one step at a time.
Exercise Goal:
1000 miles on the treadmill,
2.5 miles Wednesday
Total walked = 299 miles  Aiming for 500 miles by March 2011
Someday I will be hiking 1000 miles in National Parks!
Posted by Merikay at 8:04 PM