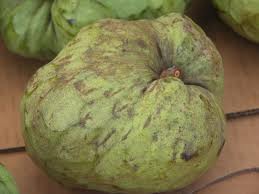 On Saturday, when we brought it home our cherimoya was quite green and hard.

The sign in the produce section said to allow several days for it to ripen.  This  gave me time to read up on how to know when it was ready to eat, and if it needed any special preparations.


The web said you could just "eat them out of hand",  in a fruit salad, or use them in recipes ranging from cherimoya creme brulee, to something that sounded like a cherimoya piña colada.

I opted for a simple fruit plate. 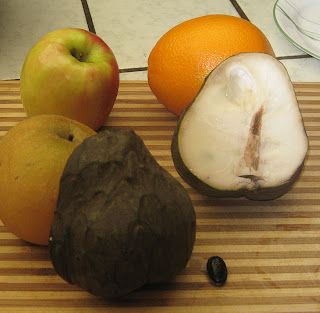 After three days the cherimoya felt soft and had turned brown. So I cut into it.  The flesh was soft, much like a ripe banana and there were large black seeds throughout. The peel stripped off easily and I cut out a couple of bruised areas. 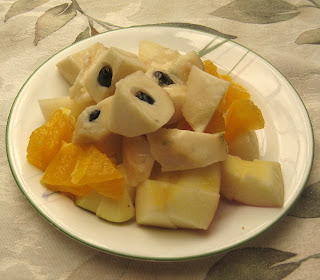 I made two plates with an apple, an asian pear, an orange and the chunked up cherimoya.

The web had suggested using a poppy seed dressing or a simple vinaigrette, but we went without.

The word that best describes the cherimoya's flavor is "tropical."

If we see them at a reasonable price in the future, we will buy them.  Thumbs up on the taste meter.

But, I did notice it seemed to discolor rather quickly so would advise that if you put it in a fruit salad you  serve it in a timely fashion.  They don't seem to keep well once cut.

Tomorrow we will cut into the REI melon from Brazil.  It looks pretty ordinary from the outside. but who knows what lies within!  (It came in it's own mesh bag with a handle!)
Posted by Merikay at 7:06 PM