Last week our daughter asked if we still had an old Super 8 movie she had made for a 5th grade class assignment.  I knew just were it was, and in the process of getting it out I also brought out a box of old family films and the projector.  She has offered to take them and have them transfered to a digital medium.

There aren't very many, and for the last few nights Craig and I have enjoyed, or groaned thru scenes from the late 70's and 80's.

Boy were we young!  And I was THIN!

One three reel saga is of our car trip from Wisconsin to Florida to go to Disney World at Christmas 1976. 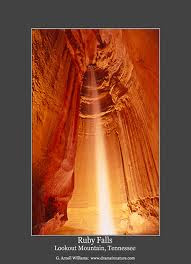 We have lots of footage of driving thru Tennessee.  One place we have never forgotten is RUBY FALLS!

As we drove we saw sign after sign along the highway.  We had to stop.  It was well worth it. At least for a couple of very inexperienced travelers.

Ruby Falls is near Chattangoona, and in my humble opinion it is a tourist stop worth doing if you like caves.

I just thought I'd mention it to any one who is lucky enough to be going to the Rally.  I think it is to the South and West of the Rally, but in the same state! Some of you may be driving that way.


By the way, thanks for all the fun and encouraging comments on yesterday's post.  I've had my doubts about taking him along from time to time.  Now I tell him he can go if he is good.
(I did get one SPAM comment that Blogger caught.  It showed up in my email, but not on my blog.  It was for male enhancement products.  Must have been because of the title :~) )

I do take comments to heart and think about what others say. I have thought about doing a trial run, or some part timing, but that is a subject for another post.

Time to get to work!  I have both sculpture orders to do, and more wallpaper to strip!