I was good and bad today

Me?  Not so much, but every few years he gets me to go to a game with him.  Today was the day.

In the past, I have always rewarded myself for going to a game with garlic fries, bratwurst, and sometimes cheese nachos.  I was determined to not eat any of those things, and packed a baggie of carrot sticks and  sliced red pepper.  I put them, and a bottle of water into my purse with a cool pack.

Good intentions, but I was lead astray.  Not by any of the favorites mentioned above, but by my own generous intentions (sure!) and a hot day.

Craig asked me to stand in line and get him a BBQ pork sandwich while he went to get a beer.  The BBQ was being sold at the same stand as ice cream, and one of the ice cream options was a double dip in a cute little plastic baseball hat. (I'm really trying to put an altruistic spin on this) Craig loves ice cream and eats it almost every night at home. 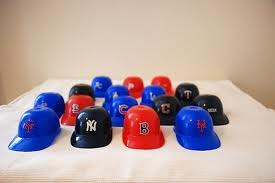 I thought the cute cup would be fun to use as he watched and listened to all the play-off games in the upcoming weeks.  But the only way I could get this special prize for him was to buy some ice cream.

After getting his sandwich and the ice cream, I went down to our seats to wait for him.  It was really hot, and his my ice cream started to melt.  What to do?

It was very good.

I'm not ashamed, because I had really bought if for myself.  Carrots only go so far.  Only a saint would be willing to buy him a BBQ and pass on the Ice Cream.

I also ate my bag of veggies.
They were better than the bratwurst.
They tasted fresh and cool.

I shared them with Craig.
Good me.

What have you indulged in lately?