We both really like the Santa Fe, New Mexico area, and are looking forward to exploring the entire state more thoroughly next spring.

We enjoy going to local museums and learning about places where history happened. On Tuesday we drove the fifty miles from Santa Fe up to Los Alamos, where the final development of the atom bomb took place. Local museums give an in-depth and personal view of the area and events. We were not disappointed by the two free museums we went to in Los Alamos.

The first was the Bradbury Science Museum. It is the chief public facility of the Los Alamos National Laboratory. This is a good museum if you like to read. The room displays included:

"History" was mostly about the Manhattan Project. 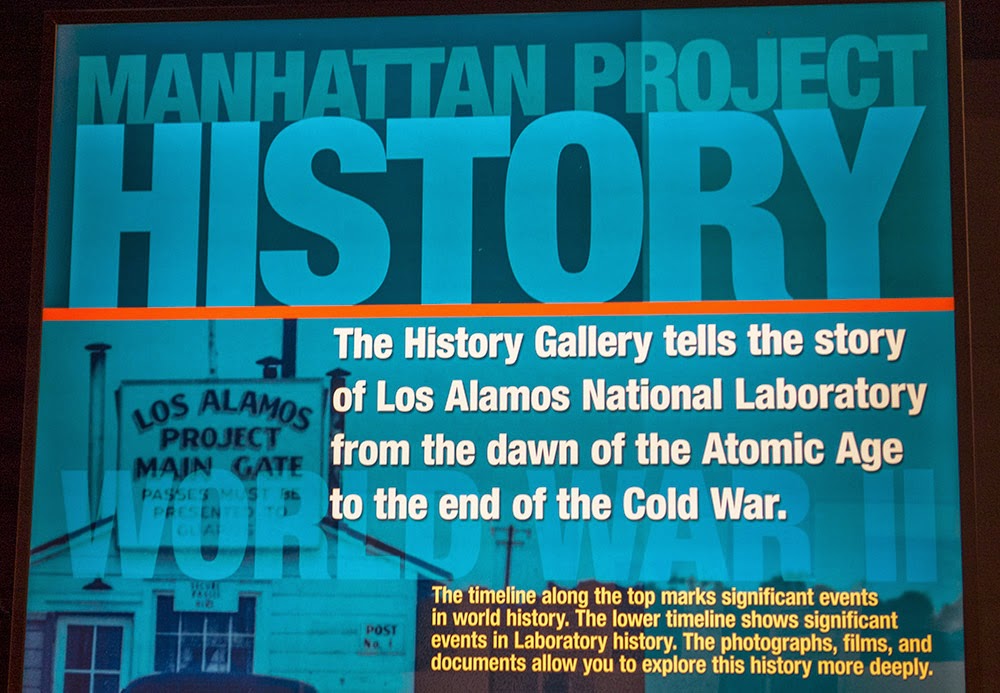 "Defense" included history of both European and Pacific WWII action, as well as models and explanations of the two atom bombs that were dropped on Japan. 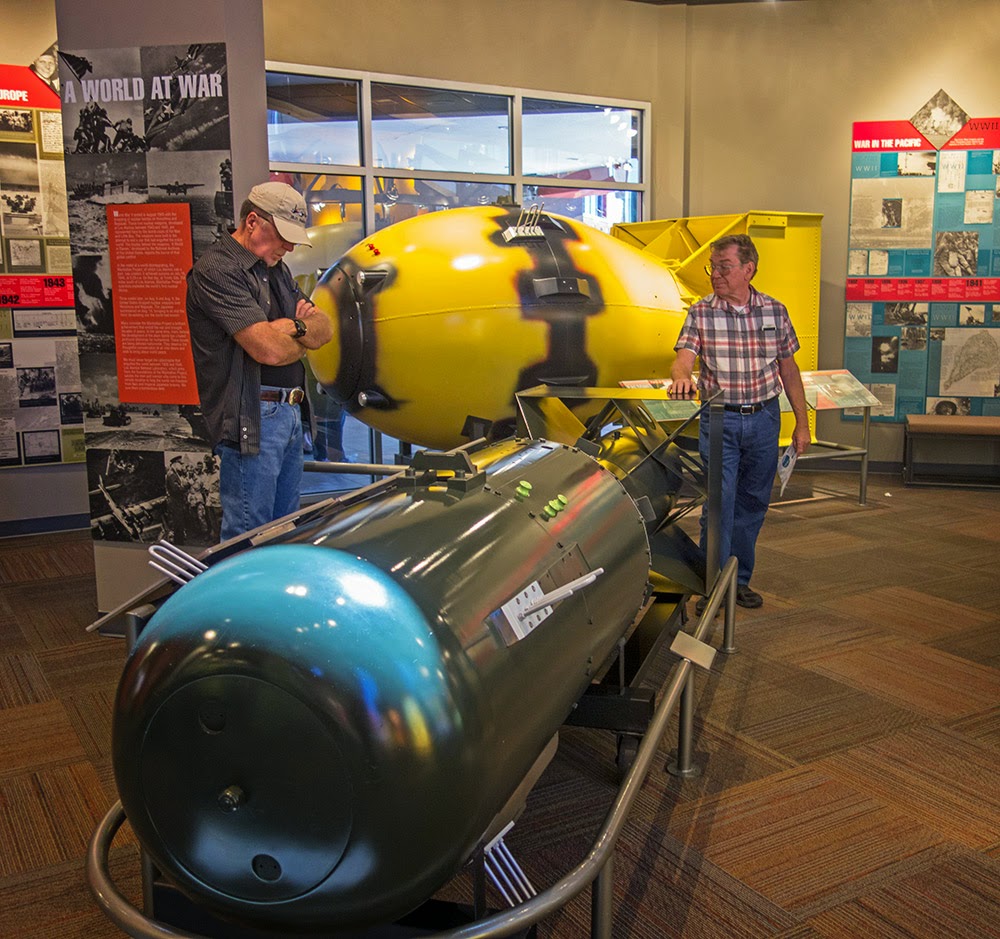 There was also information about nuclear weapons in general and the stewardship of the current stockpiles.

"Research" discussed radiation as well as development of peaceful applications of nuclear power and alternative energy sources such as wind and algae. 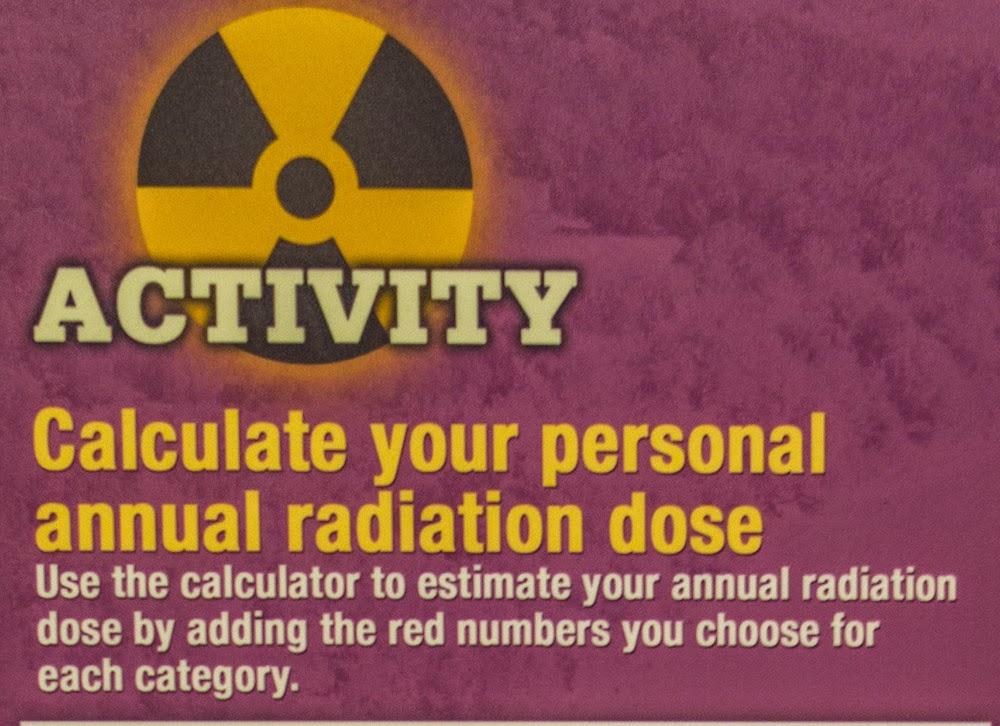 Another display was the "Tech Lab" with some hands on exhibits that appeal to the button-pushing and game-playing younger generation. 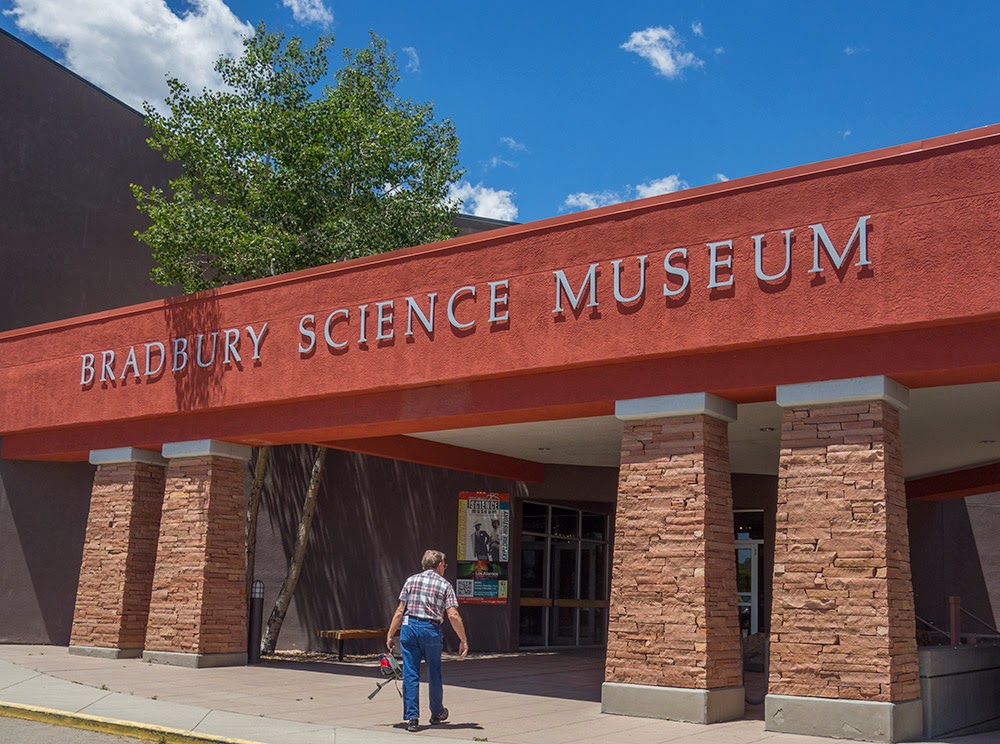 We retrieved our lunch from the car and enjoyed it on a nice bench in the shade just outside of the Museum door. I'm trying to keep our expenses under control. Eating a homemade lunch whenever possible helps a lot. Besides, a sandwich, a fruit, and a couple of cookies has to be healthier for you than most fast food meals. 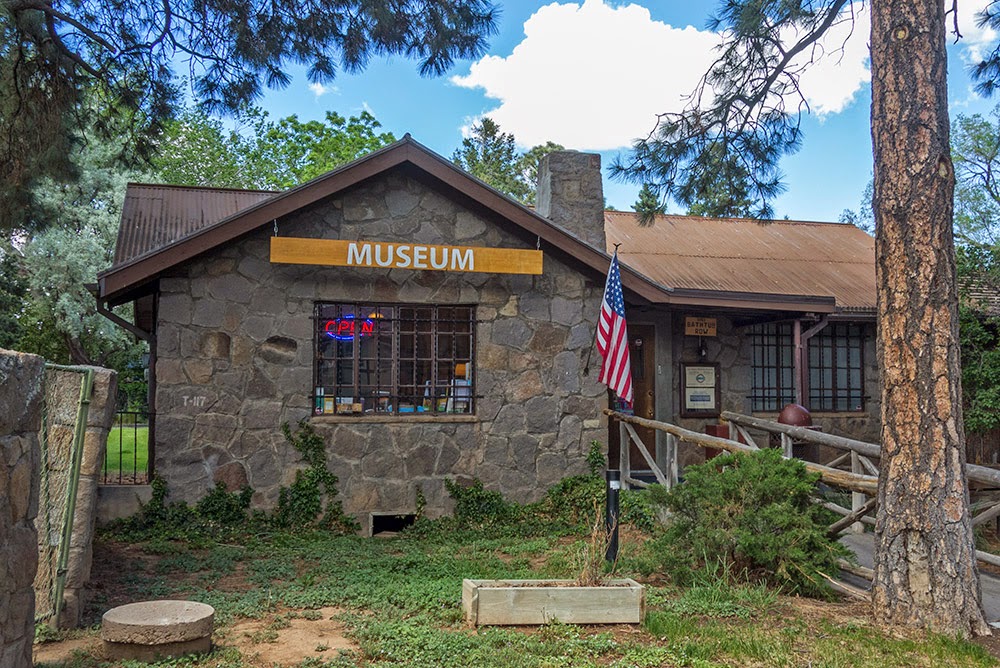 The free local history museum was only a few blocks walk away. Not large, but packed full of interesting information and insight into the daily life, the feelings, and the hardships of the people who lived and worked on the project in 1943 through 1946. They were scientists and workers from all over the world. Both military and civilian, and while they were there they were not allowed to tell anyone, including their families, where they were or what they were working on. In fact many of the non-scientists did not know what was being made there until after the war ended.

Another exhibit at the history museum was about a lady called Edith Warner who moved to the Los Alamos area from the East.  She worked at a boys' school that preceded the bomb effort, and later fed some of the scientists at her home, which doubled as a tea house.  We bought a book there called The House at Otowi Bridge which mixes her story with that of the author, who was the daughter of the man who founded the boys' school.  It's starting out as a great read! 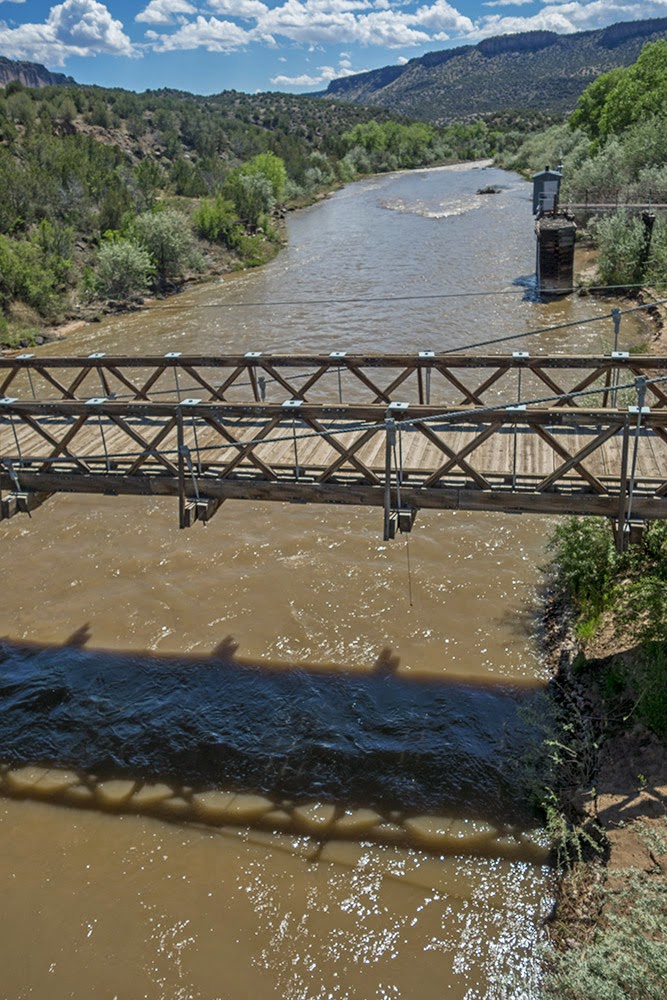 The drive to Los Alamos and back was quite scenic. Good road and very little traffic. One of our stops on the way back was at the bridge crossing the Rio Grande River, well upstream from where it serves as part of the US-Mexico border. It was running fast and brown from recent rains.

We also saw three houses near the bridge, in varying degrees of decline.  After starting to read the book, we think that one of these was, in fact, Edith Warner's House at Otowi Bridge, where famous atomic scientists had dinner many times. 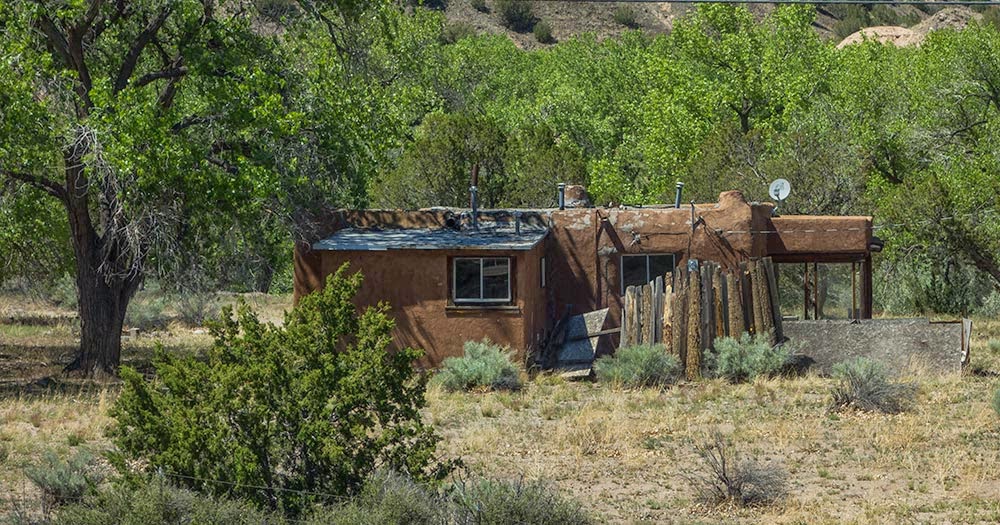 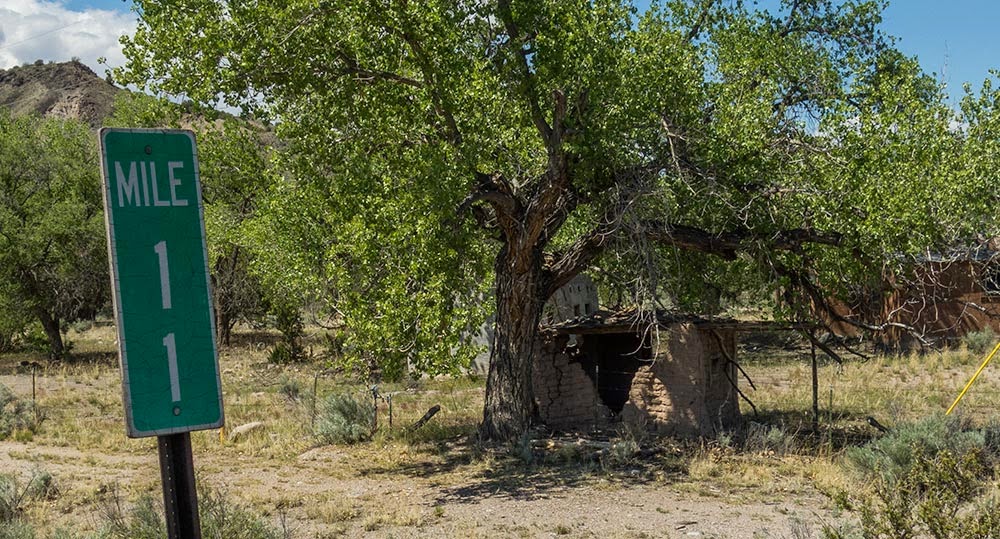 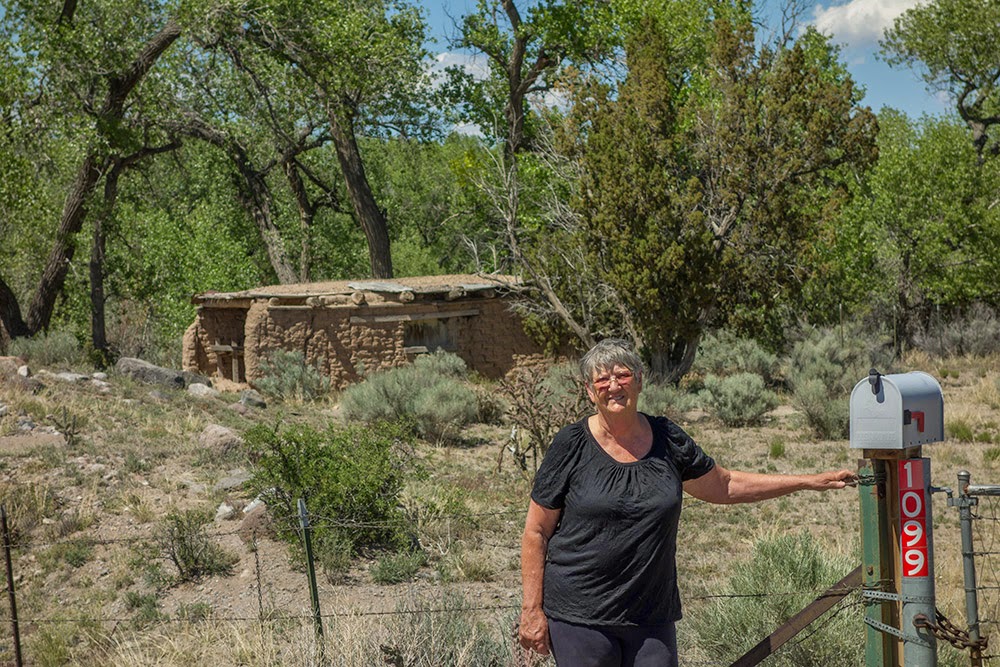 We also stopped  to try and get a picture of the distant mountains that still have snow on them. Unfortunately there was a white cloud right behind or over the white snow cap, but if you look hard you can see it. 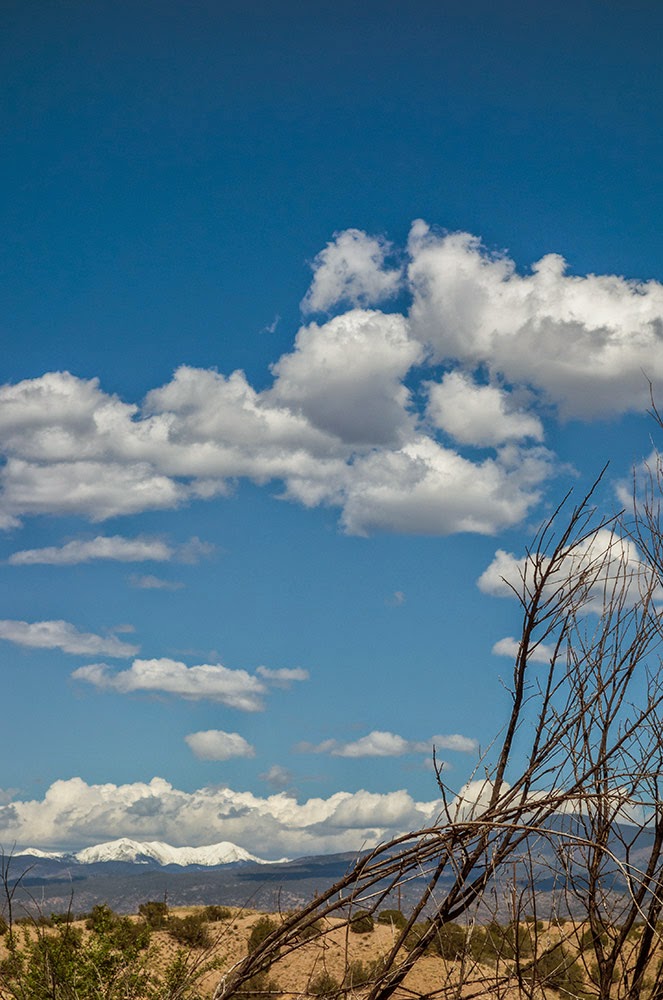 By the end of the day we were once again happy to be able to go home instead of to a hotel or motel.

Seeing new places is enjoyable but exhausting. I was looking forward to our next few days because they were to be in a slightly remote, low-key park.