On our second day in the Petrified Forest National Park we visited the part north of I-40. It is called the Painted Desert.

But before I share what we saw there, I want to respond to a few of my recent comments.

Karen in The Woods said her mother had been disappointed when she saw the petrified wood because she had expected the trees to be still standing. I think this must be a common misconception, because thirty-five years ago, when we first visited this place, I thought the same thing. They should have called it the Petrified Logs National Park!

Judy pointed out the logs did crack into segments due to natural causes.  I knew that, BUT after so many years of helping cut and collect our winter supply of firewood this place reminded me of all that work.  I'm sure there must be a dynamic tension involved to cause the petrified logs to split so evenly into rounds. Fresh wood never would split like this. Rounds are cut and splitting goes with the grain.

I have a good imagination, and had fun speculating about the aliens collecting firewood and leaving a ruined forest behind.  Roswell is not so far away!  :))

An answer to my Florida friends Karen and Al, the RV park we stayed at was in Holbrook. It was a KOA. There was also a Good Sam Park on the same road that look fine, called the OK RV park. Who wants to stay at a place that is just OK?  We usually avoid KOA's because they can be a little more expensive, but our first choice that had been found in the Passport America book was an absolute dump. It was called the ROOT 66 RV park, and we pulled in, took one look and left. I really have to start looking at the reviews and not just the book listings.  The KOA was fine. Clean and convenient, but not spectacular in any way.

Now on to the Painted Desert:

Although there are many square miles of wilderness in this part of the park, the paved road only goes along the southern rim and is viewed at a number of pull out overlooks. If you were just driving through, pulling a fifth wheel or driving a large motorhome with a toad would not be a problem. There are no steep grades or hard curves. I debated suggesting we drive the Alfa around the north segment in the morning and then continue on our way, but decided we could just as easily stay an extra night at the park we were at and pull out Saturday morning. 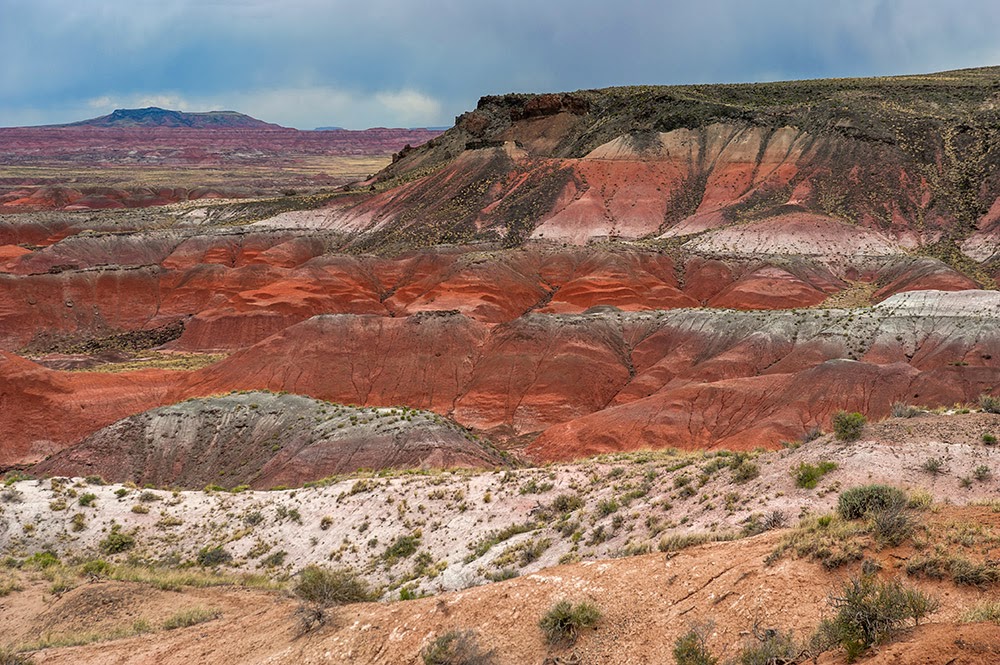 Looks like a postcard!  We have so many great shots it was hard to choose which to include.

One of our stops was at the Painted Desert Inn, a restored cafe and hotel. It is no longer used as such, but one does get the feel for the route 66 experience.

Thanks to these guys who did so much work building our National Parks and doing restorations of many places like this. The CCC provided work for many during the depression in the 30s. 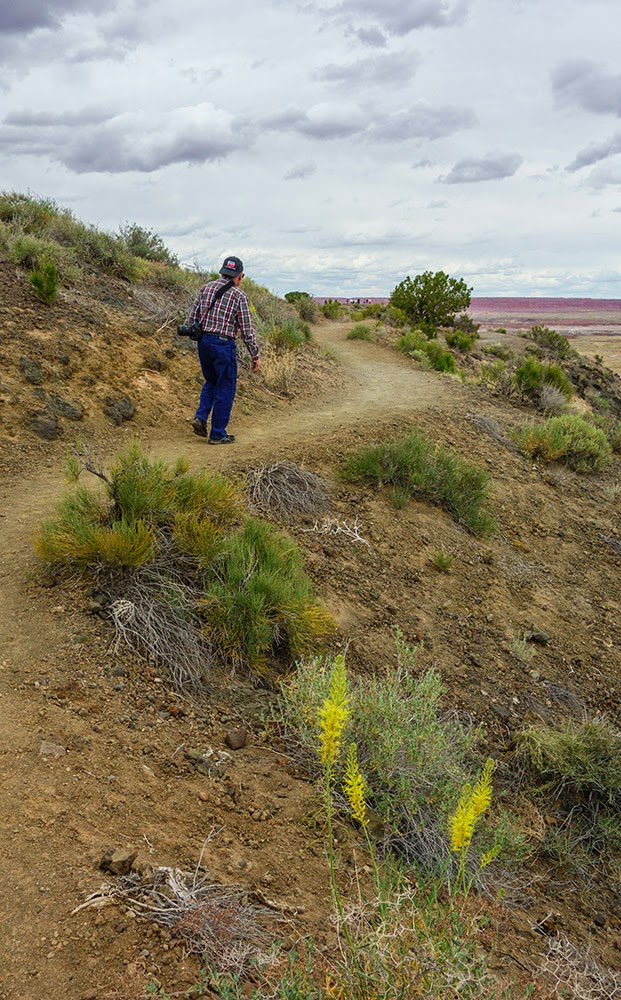 There was one trail along the rim that we walked. It was about a mile long and had some very good signage marking the plants and explaining what the Native Americans had used them for.  Once again the weather was very mild.

There were a few other people and a couple of bus loads of school children in this part of the park, but we managed to play leap frog from pullout to pullout with them.  The kids were all well behaved and enjoying themselves. I think many of them were special education students and they were very closely supervised.

At the last pullout we stopped at we saw this delightful rig.

The couple who built and are pulling it have a blog called
Tiny House Giant Adventure I haven't read any of their posts, but will be following it. Looks like fun!

Finally we have been having fun looking at the clouds and seeing things in them just as we did as children. 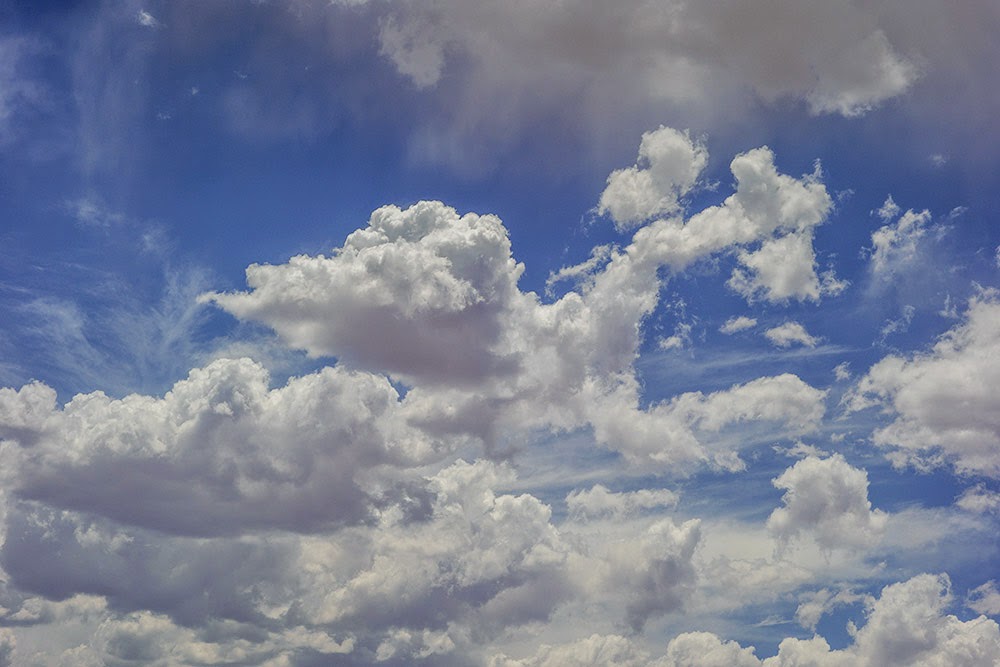 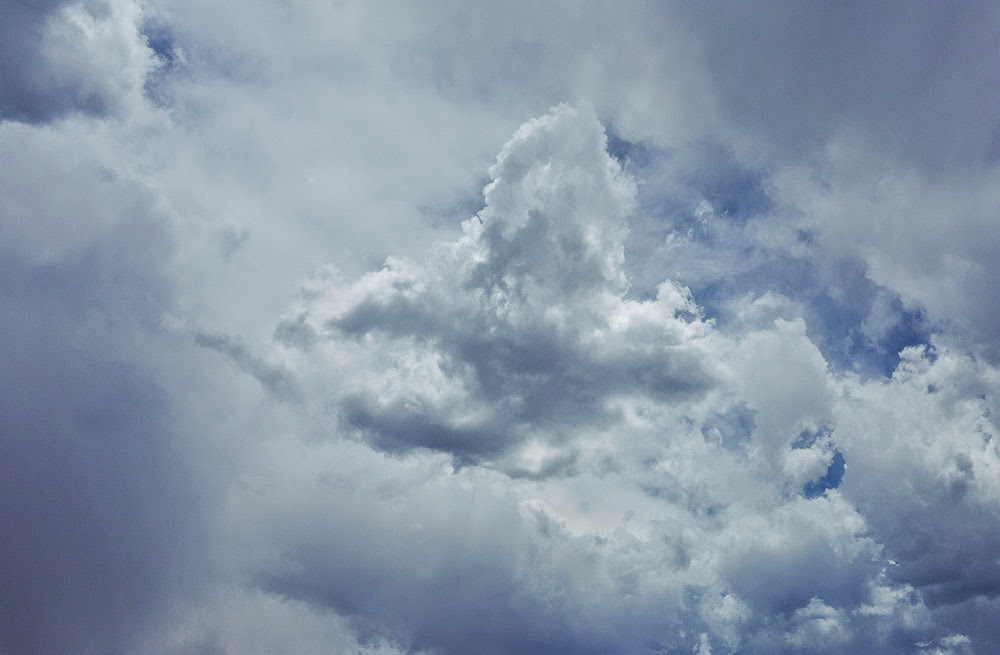 I am composing this post as we drive toward Albuquerque New Mexico on I-40.  The day started with clear skies and no wind. We watched the cloud change and have just driven thru our first rain storm with lightning, thunder and small hail. The Alfa did well.