Our drive to Gettysburg was a bit stressful because I tried to "wing it" and boondock for a night.  Looking at the mileage between Niagara Falls and Gettysburg, I knew it was farther than we wanted to drive in one day, and a just dinner and sleep stop about half way was desirable. In my reference books, I found a casino that listed free overnight parking, just on the border between New York and Pennsylvania. It looked perfect.  But when we got there, and I went in to check with security, I was told that they had just recently changed their policy, and overnight RV or truck parking was no longer allowed.

Lesson learned: If you want to stop at someplace that says check with security, call ahead and ask what their policy is. Information changes, and books get out of date.

I was directed to a gravel lot along the highway where truckers could park, but it didn't seem like somewhere we wanted to be. I have nothing against truckers, and if it had been late at night or an emergency, we would have gone there.

But it was mid-afternoon, and as we drove on toward Gettysburg I started to make some calls.  How wonderful cell phones are! We found a place to stay that was a bit further along, but doable.

The next day we continued on to Artillery Ridge campground in Gettysburg. Its subtitle is "the National Riding Stable" and it had a large facility for horses. The picture below was taken from the stable area when we were on our evening walk. 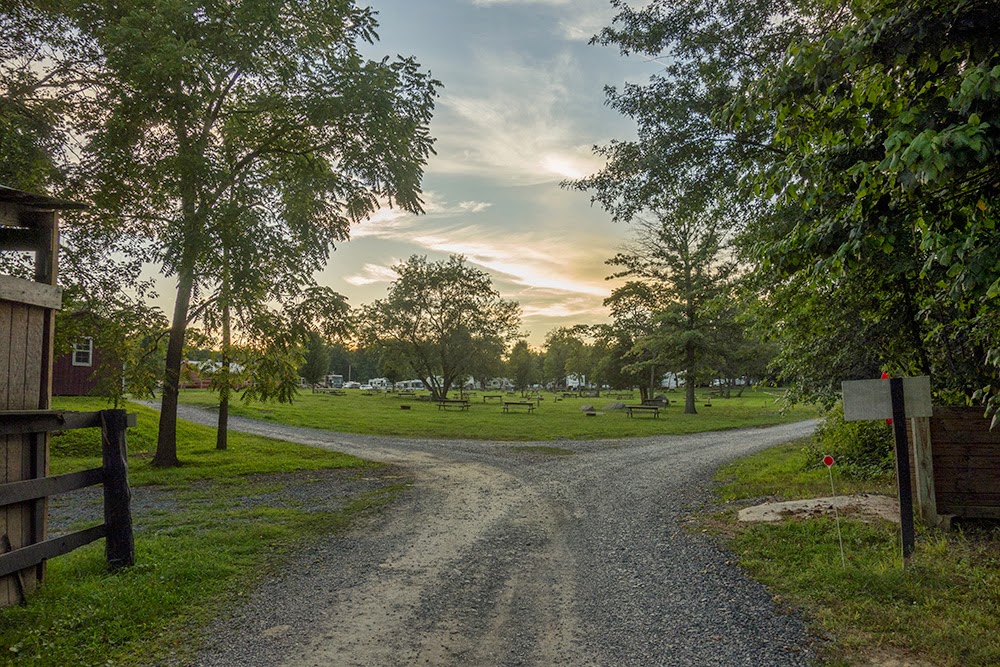 The horses were friendly and this one had a velvet soft nose. 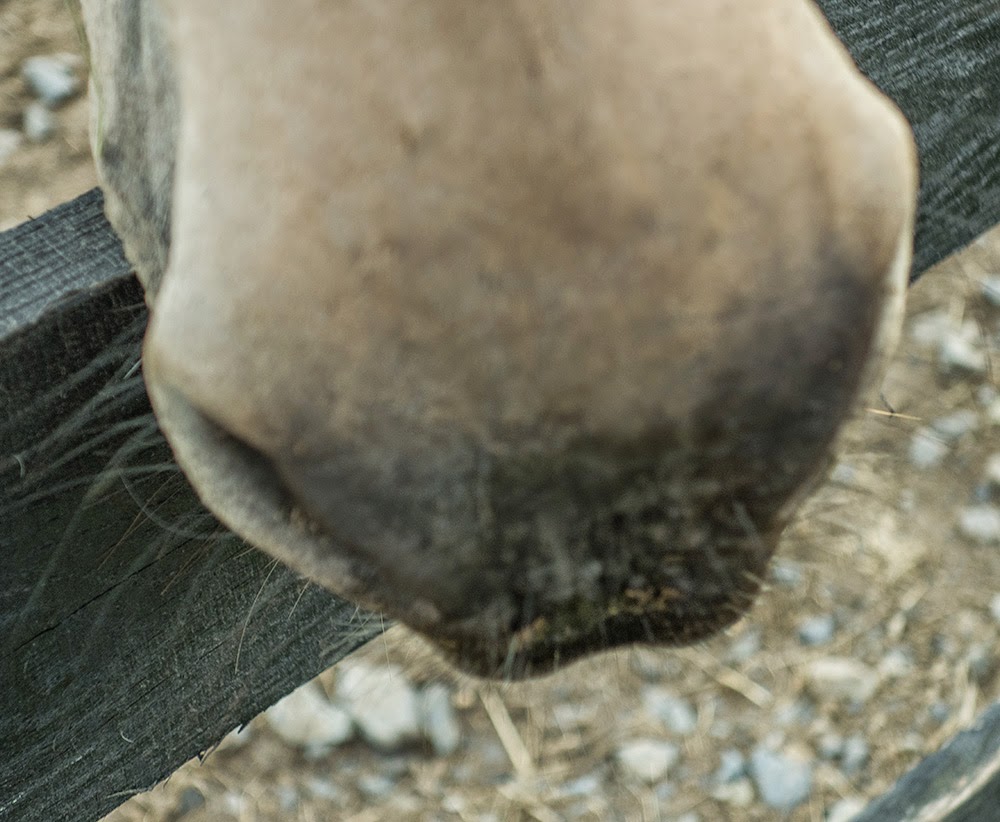 Gettysburg:
Truth be told, I have never been very interested in battle history or battle grounds. How the troops were moved and who the generals were, is not high on my list of things to remember or appreciate. But the battleground at Gettysburg had a strangely sobering effect on me. The thought that 55,000 men were killed or wounded there was, at first, unbelievable. And then as we drove past many of the 1300-1400 monuments, many of which we read, it became a shocking reality. 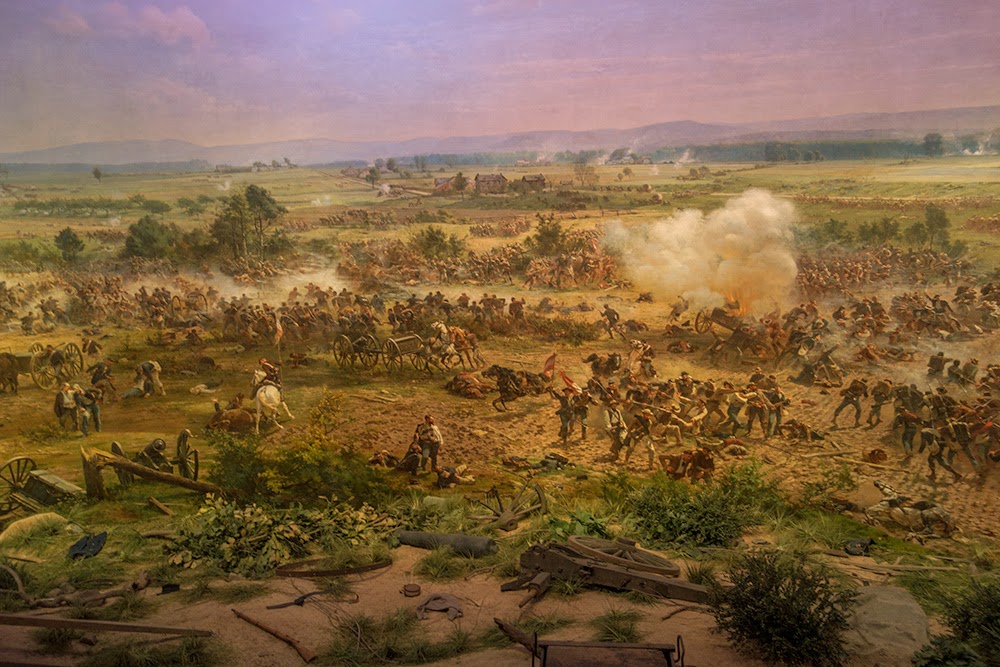 Next, we went to two ranger programs. The first was about the daily lives of the soldiers: who they were, why they joined up, what they ate, how they lived when not in battle, and what they wore. The ranger asked for a volunteer, and a boy, about 12,  raised his hand. The ranger then proceeded to describe and dress the boy in a Union issue uniform. He was a good sport, but said it was all quite hot and heavy. 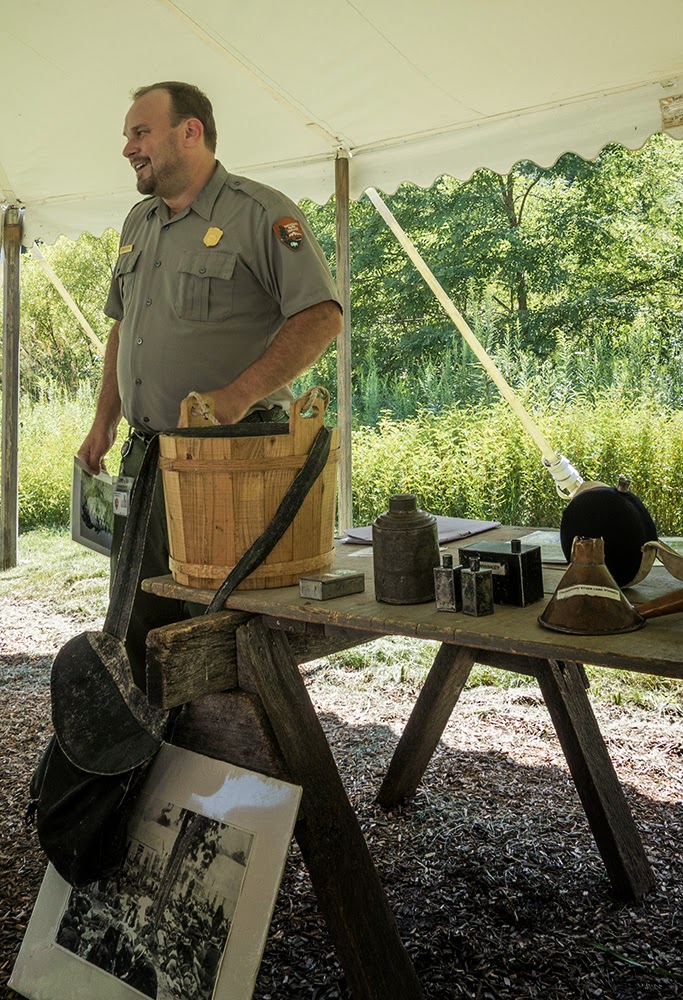 The second program we heard was about the battlefield medical care. I knew how primitive things were, but the description of no sanitation, haphazard administration of anesthesia, and piles of amputated legs and arms being carted off in wheel barrows, was disconcerting to say the least.

Disease was also a big problem. For every man who died in battle, two died from communicable disease.


The first night we camped there I had some very disturbing dreams.  Not quite nightmares, but unpleasantly reminiscent of what we had learned that day.

On our second day we decided it was too hot to hike, and opted for the self guided auto tour of the battleground. The route was well marked and the park provided map gave sufficient information about the highlighted stopping points to satisfy us. We drove, stopped, drove and stopped again to read or walk around many of the monuments. 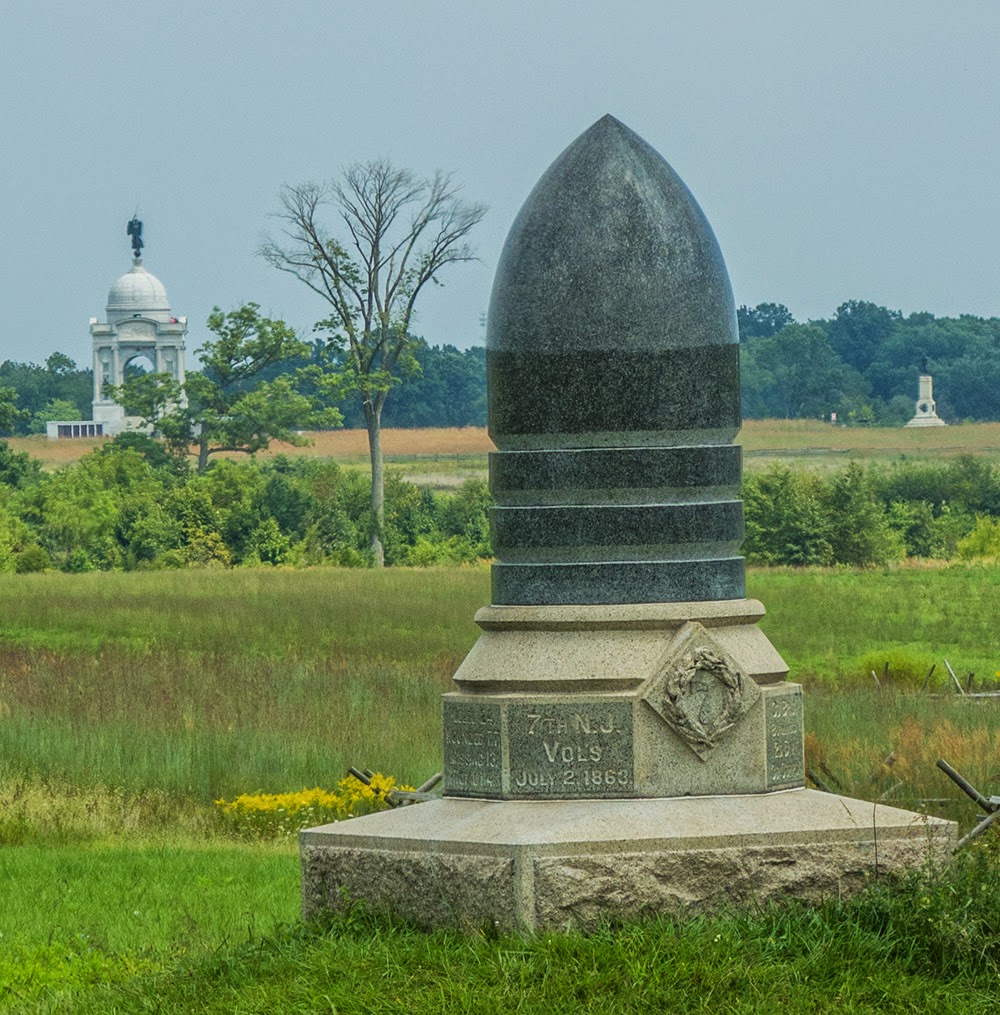 This one was one of the simpler ones. It is in the shape of a bullet. 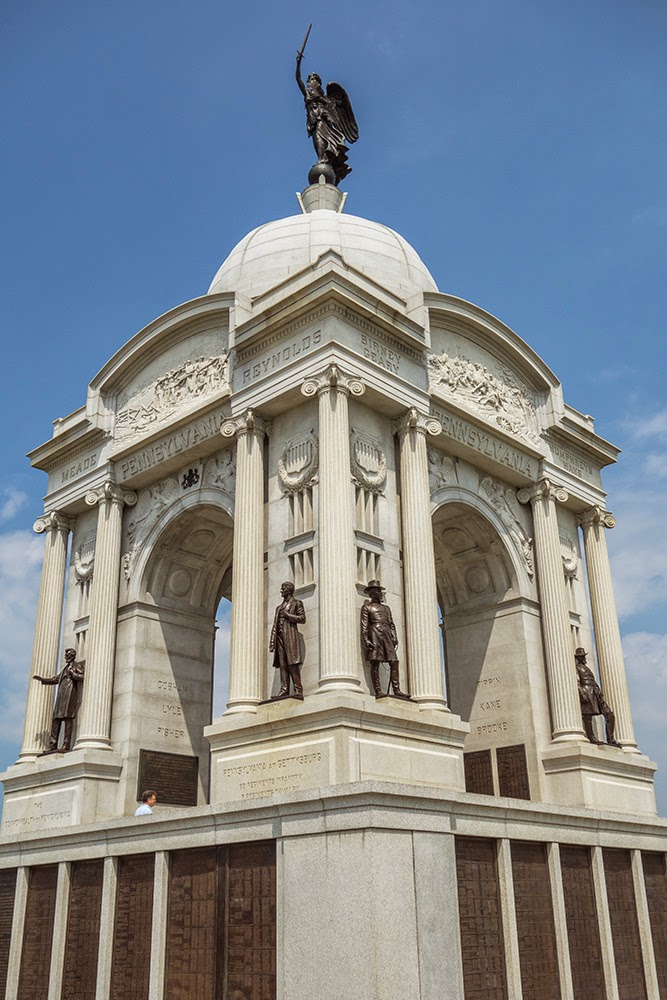 This was one of the larger ones and listed the names of every one of the  35,000 men from Pennsylvania that were in the battle. 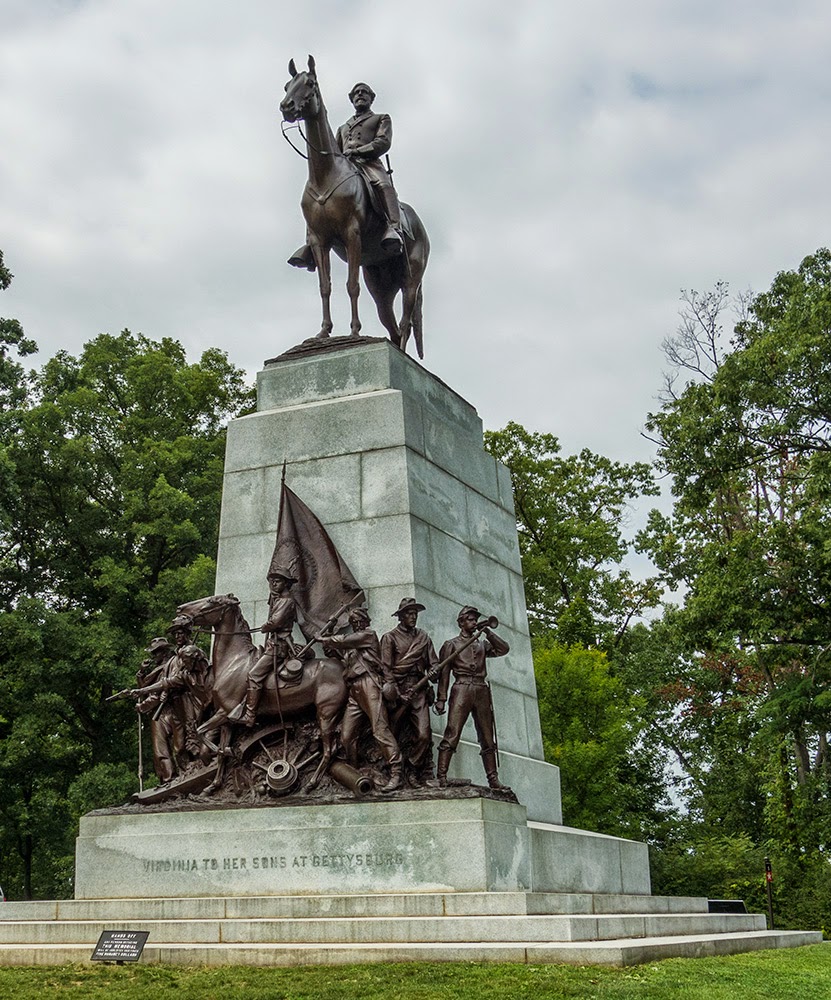 There were many monuments for both sides. Atop this one was a statue of General Robert E Lee.

On our third and last day there we decided to use the two free event tickets we were given when we checked in at the RV park. I did not have high expectations because they were smaller "commercial" venues, but was pleasantly surprised when they were not a complete waste of time.

The first was the "Diorama", a room size miniature layout of the battleground. It was in the back room of a gift shop. We were seated in bleachers, the lights went down, and an audio, spot light, and video screen program was presented.

After having learned about the battle at the visitor's center and museum, and after riding around the area and seeing the fields and fences first hand, this presentation brought it together in my mind. 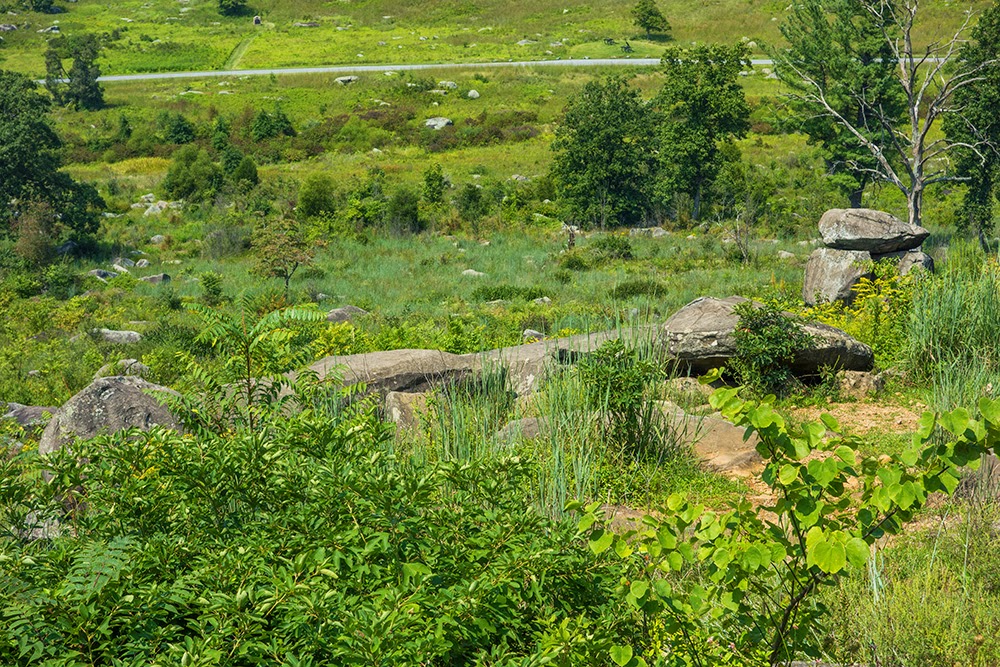 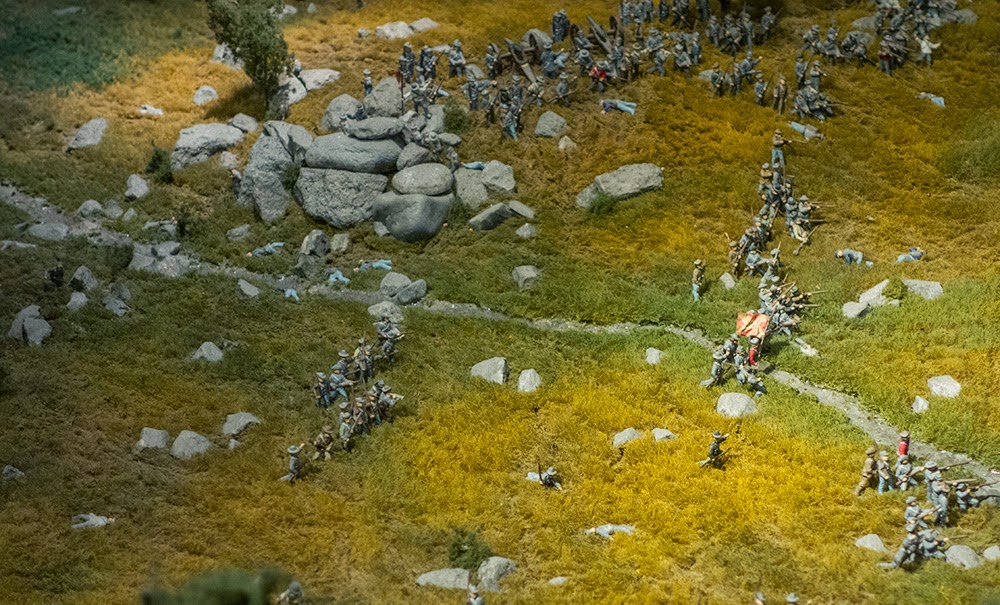 The rocks and road in the top picture are where a group of Confederate soldiers made a stand. The lower, slightly out of focus image, is of a part of the diorama that depicted a nearby location.

The second free attraction was called the Lincoln Train Museum. Again, the front area was a large gift shop, but in the back room were a couple oft large model train layout, lots of train memorabilia, and a Lincoln collection. Part of the exhibit was a replica of the train car that transported Lincoln's body back to Illinois after his assassination.  We took seats inside, it was darkened, and the car moved to simulate a train ride while there was a program about Lincoln on the screen at the front.