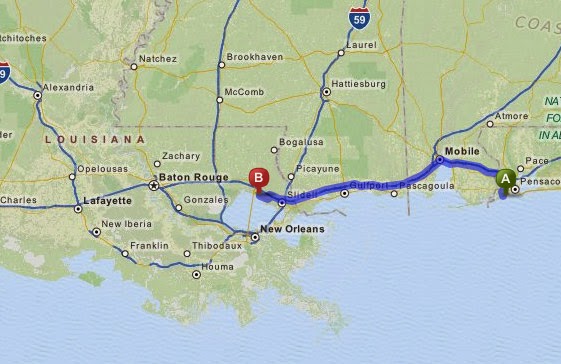 We arrived at Fontainebleau State Park a little after 3 PM on Tuesday  It was only 206 miles, and the roads were smooth and the traffic light.


Because our time here will be short, we decided to take a walk after we got here to explore a bit of the park before dinner. 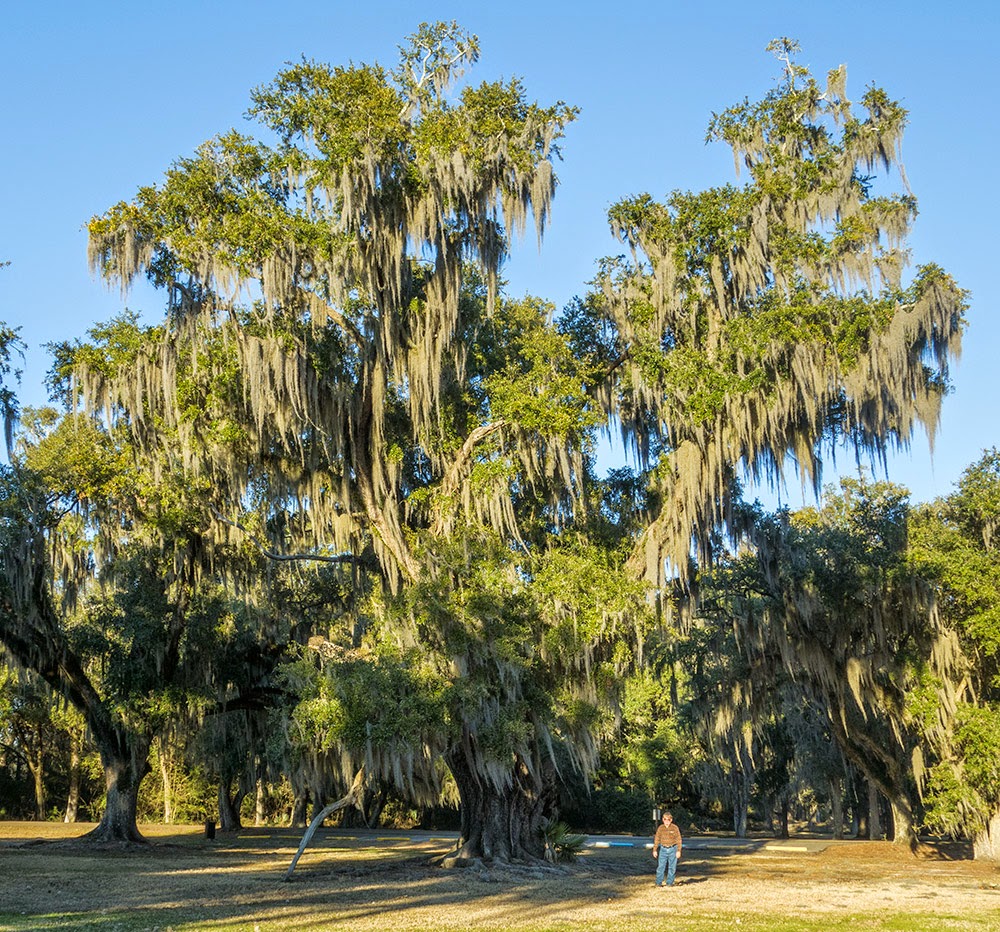 We thought we had seen some very big live oak trees in Georgia and Florida. But the trees at Fontainebleau were even bigger.

Notice how tiny Craig is just to the right of this giant.

In California there has been an epidemic of Sudden Oak Death Syndrome since the 1990s that has killed many of the Live Oaks in the state.   I really hope it never infects the oaks in the American South. These huge trees are a national treasure.

Fontainebleau State Park is on the northeast shore of Lake Pontchartrain.  I remember when the levees failed during Hurricane Katrina in 2005. I knew it was a big lake, but I didn't realize just how big it really is. According to the internet it is 40 miles long and 25 miles wide.

No wonder it destroyed a lot of homes when it flooded sections of New Orleans. 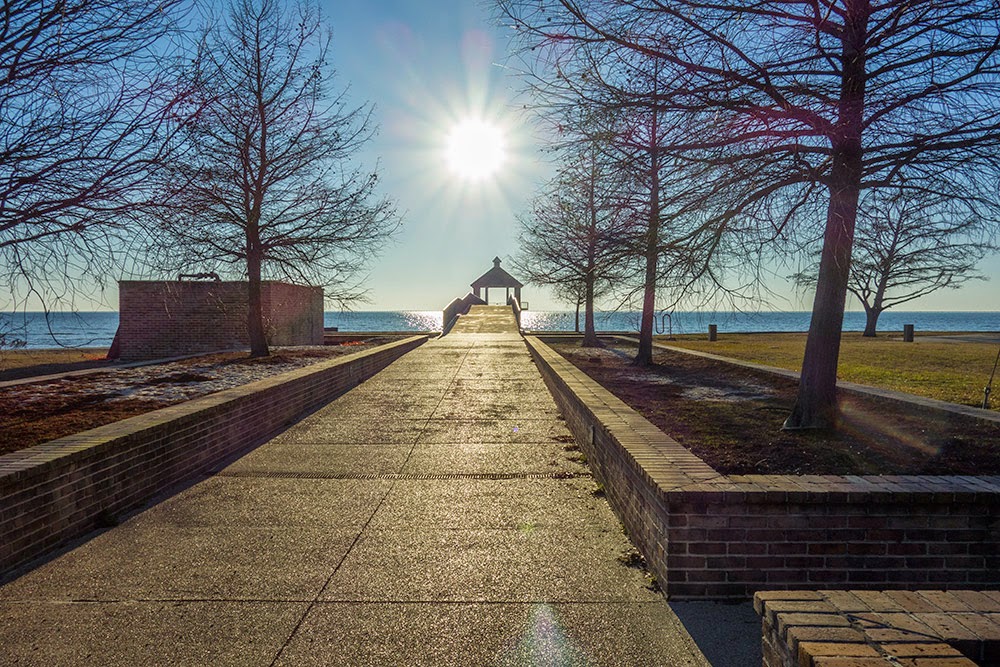 The late afternoon light was very interesting, so I made a companion image our new header.

There was enough daylight left to take a short walk on a couple of connecting trails along the lake. One was called the Alligator Marsh trail, but it was too chilly out for any alligators to be out of their watery homes. Craig was glad because it was getting dark and he didn't want to step on one by accident.

We drove the 24 mile causeway across the lake to New Orleans on Wednesday with a plan to visit the WWII Museum and take in a couple of evening Mardi Gras parades that were going to be held near the Museum. Although the parking fee was high, $20, we were able to do both without moving the car.

If you are an American History buff, this museum is a must-see. I rather like one subject museums such as this because they can go into depth in a way a multi-subject museum cannot.

To be honest, we did not take many pictures that were suitable for a blog. But this one shows an exhibit I found interesting if not a bit disturbing in its somewhat distorted attitude.

Each of the lines in the three cases was a line of little soldiers. 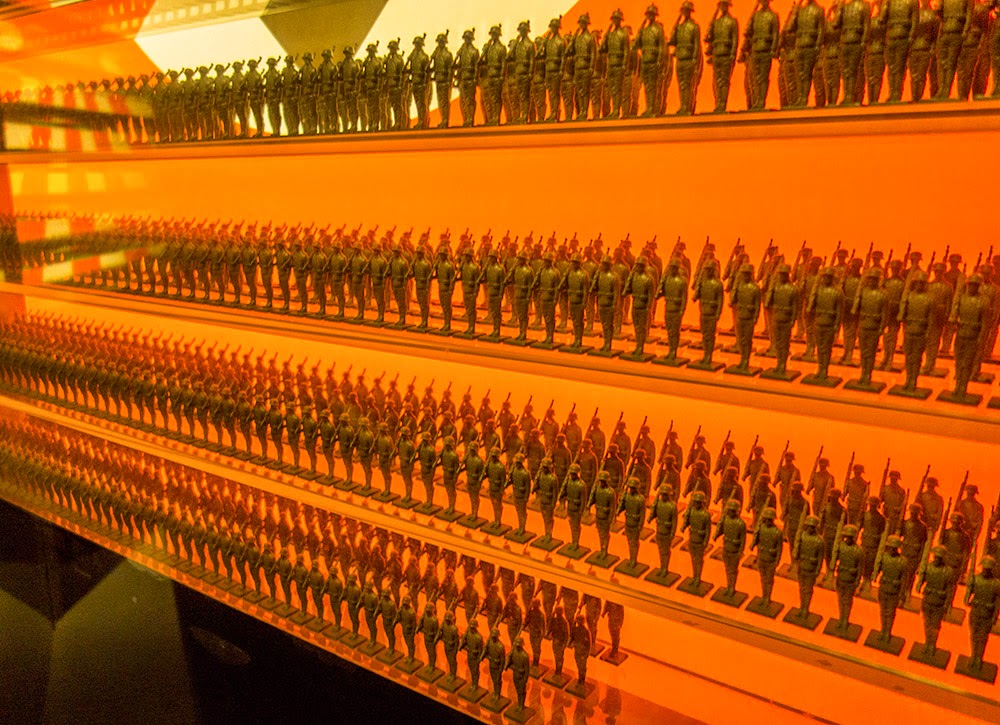 This is a closeup. Each of the toy soldiers represented 1000 troops. As you can see in the top image, the US armed forces were vastly outnumbered by both the Japanese and by the Germans, much less by their combined numbers.

What I found disturbing is the failure to show the English, the Australian, Canadians, and the other countries that participated. I suppose this is the US WWII museum, and these other forces were included in other exhibits, but this made me feel like we stood alone, which of course we did not.

Because we got a bit of a late start, we did not have time to go through all of the museum.

I can't help wondering if in fifty years there will be a similar museum detailing the wars in the Middle East.

I hate to include these thoughts in a cheerful travel blog, but personally I think it might be time to send our young men and women to fight and die. The radical Islamic movement will not go away and will not stop its terror, any more than Hitler would have stopped on his own.

But we cannot, should not, and will not do it alone. It may be a regional problem, but it will take the countries of world to solve it.