Mardi Gras lasts from Kings Day (January 6) to Fat Tuesday (February 17 this year), with the week before Fat Tuesday having many parades and activities. The biggest parades are on the last Saturday through Tuesday.

We had an appointment to get our awning repaired in northern Louisiana on the 16th, but we were still able to get a taste of Mardi Gras by going to a couple of parades and visiting the French Quarter.  Each Mardi Gras parade is organized and built by a group of people called a "krewe".  We saw the parades of the Druids and Krewe Nyx.

We watched the parades from a "family friendly" area southwest of the French Quarter. As we waited for the first parade to start, there were many children running and playing in the street. They really seemed to be having a great time and we enjoyed their antics. While we ate our street food supper, we watched a New Orleans police woman give a cuddly bear to a boy who looked about twelve, and a ball to his younger sister. I had to smile when I watched the boy give the bear a hug when he thought no one was looking.

I like parades, and this one did not disappoint me. There were horses, bands, fancy cars and motorcycles, dance groups, and of course the floats. 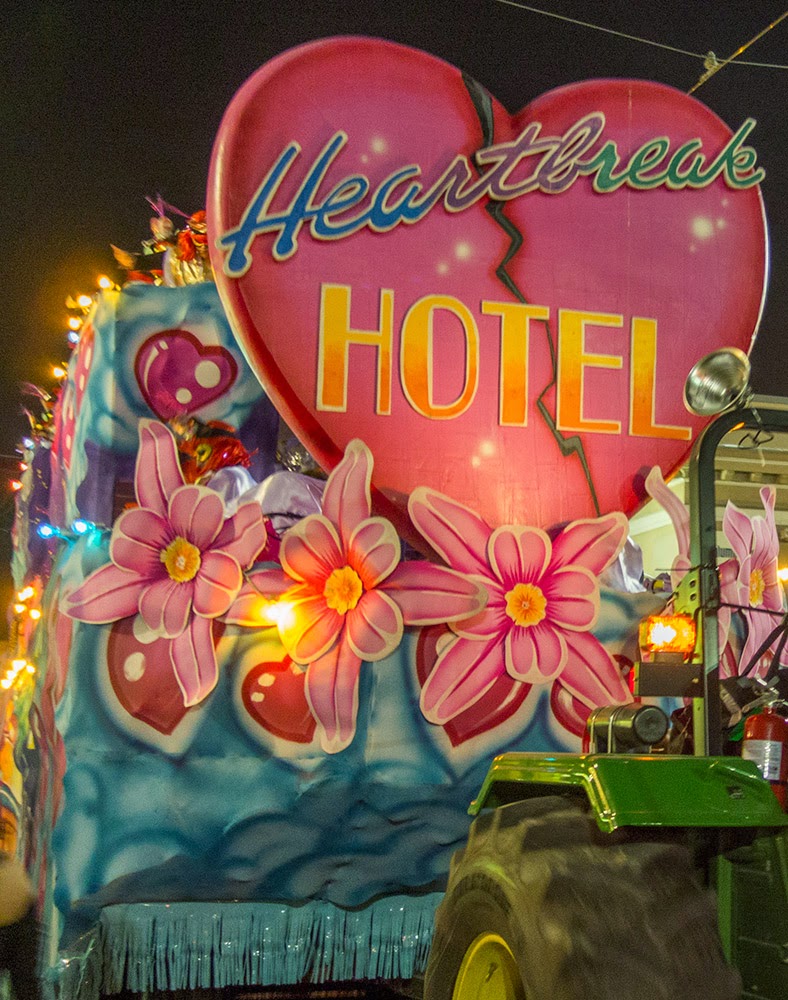 The floats were large and very colorful. 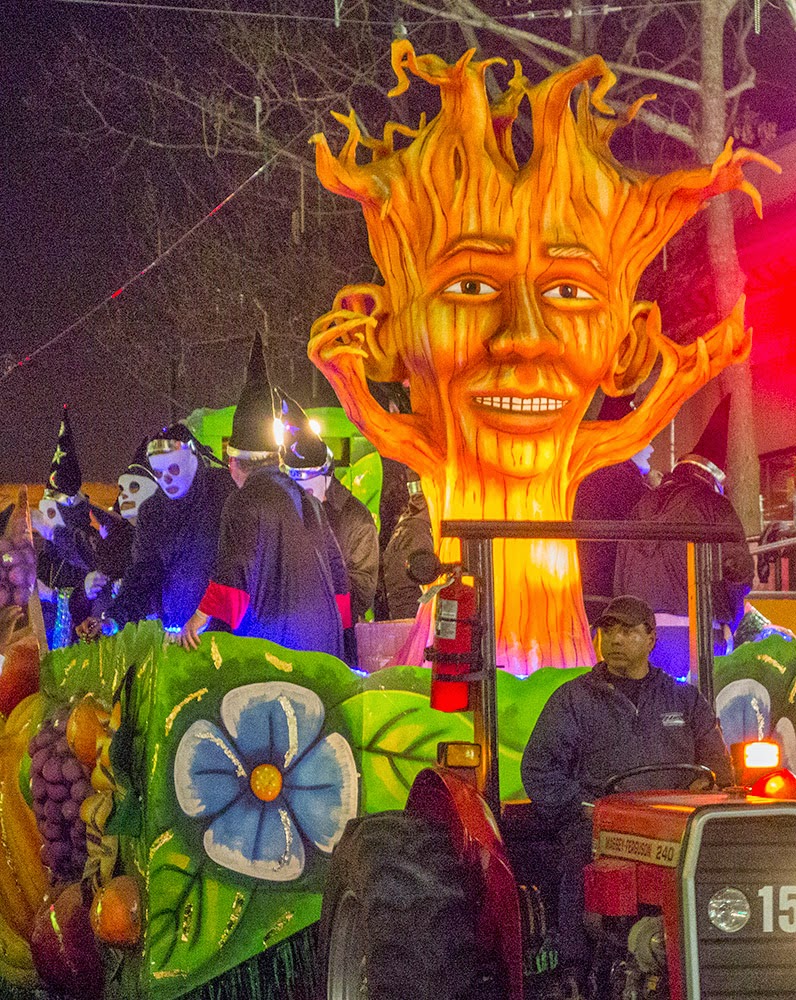 On each float there were numerous costumed Krewe members who tossed beads and trinkets to the crowds.

I was excited when I caught a few beads from the first few floats that went by. Everyone reaches out and calls to the tossers in hope of getting their attention. It is more fun if you feel like they are tossing to you and not just into the crowd. 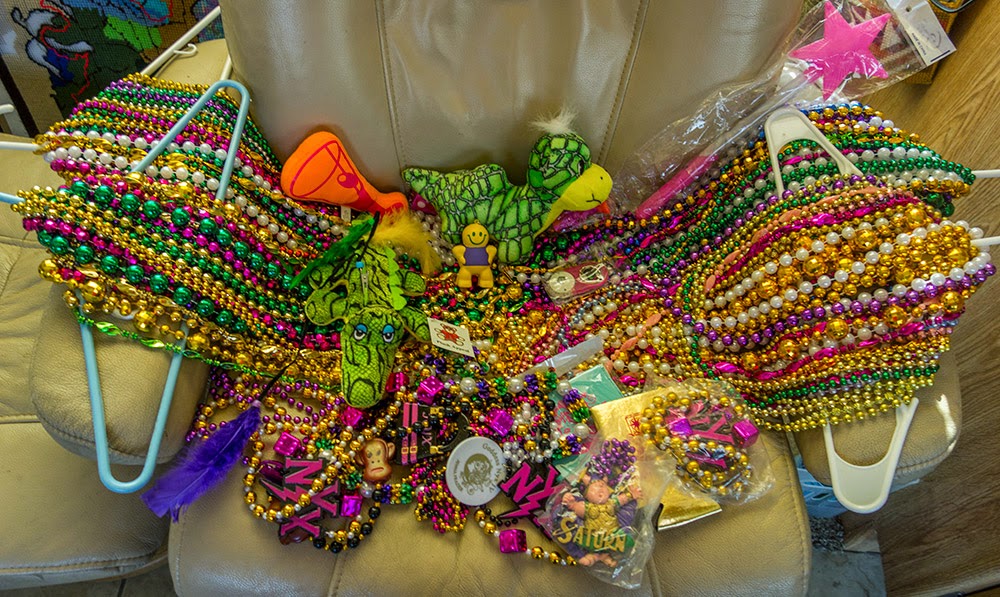 This is a picture of most of the beads we caught. We also caught a little alligator and a little dinosaur which will join our other stuffed pets on the Alfa dashboard. I'm not sure what we will do with all the beads. For now they are in a bag in the bay.

One of the floats had Hollywood lights that shown up into the night sky. I thought it was neat the way they illuminated the budding trees overhead. 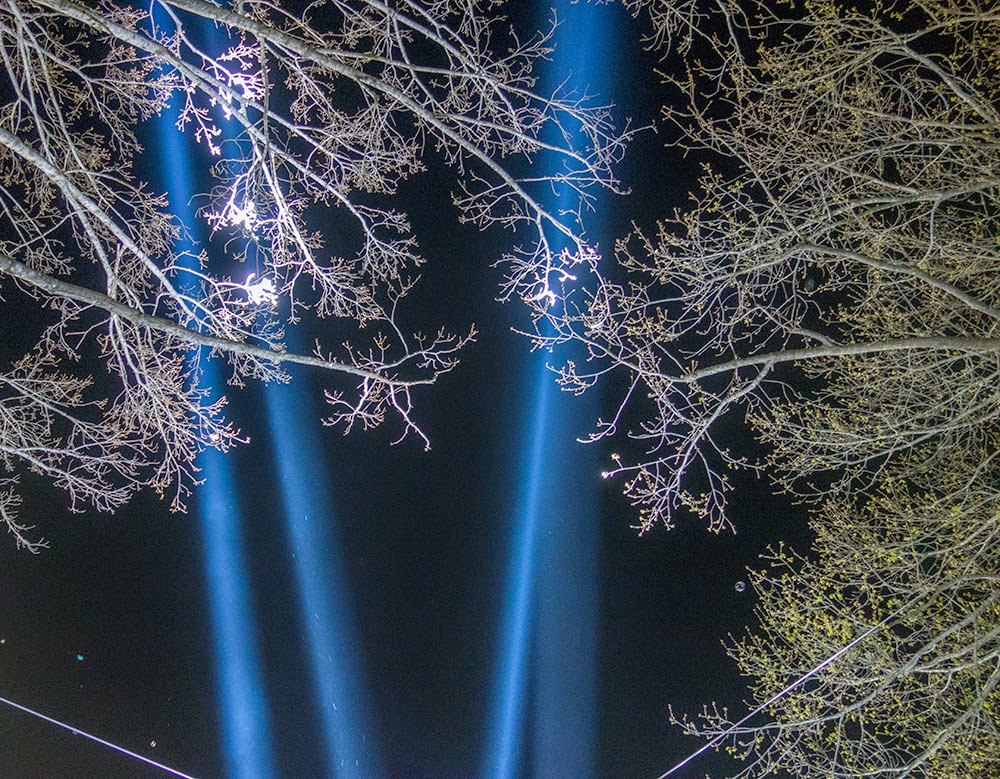 On Friday we went to the French Quarter. One of our first stops was at a mask store. I really wanted one, but couldn't find one that was compatible with my glasses, so I settled for a Mardi Gras hat instead. 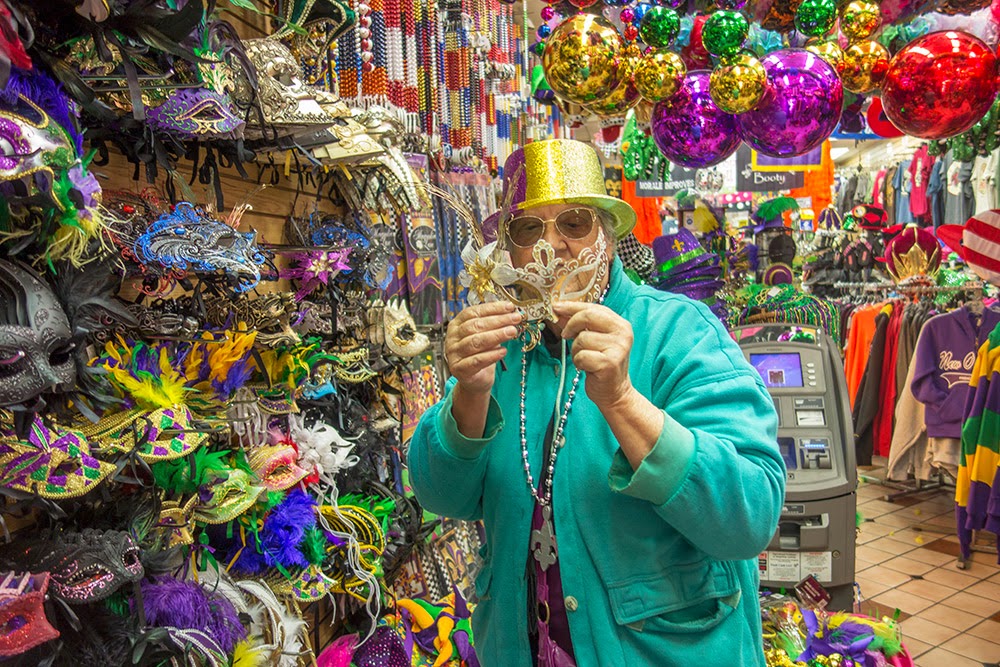 We couldn't help snapping a picture of this banner on sale at the same store. 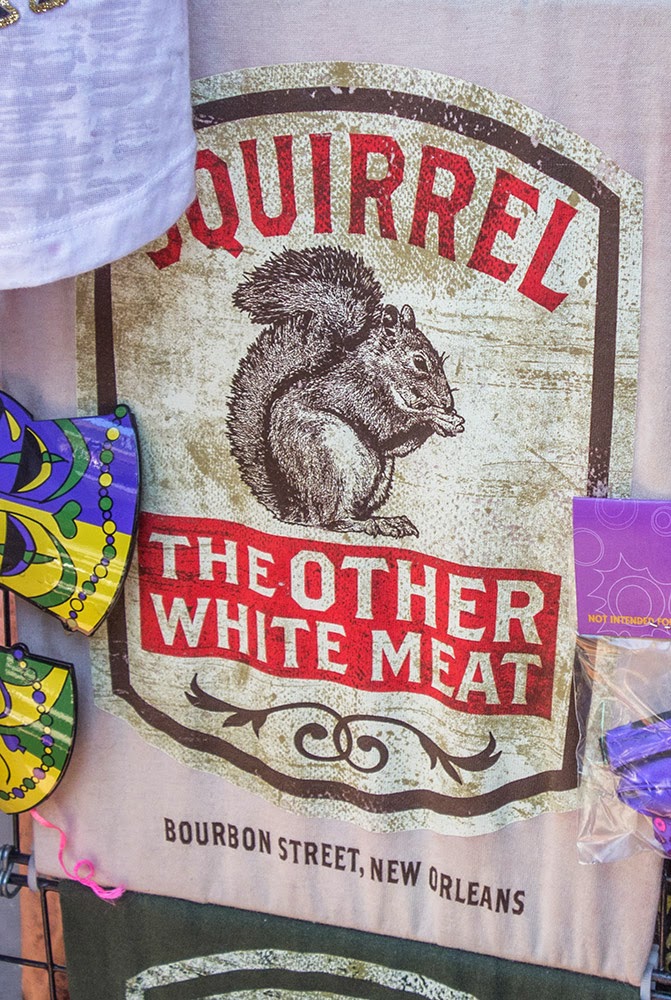 The streets were full of people. In some places you could hardly move. We watched as the Talladega College marching band wove its way through. Most of the buildings were decorated with garlands of green, gold, and purple, and costumed people tossed beads and such to the crowds below. 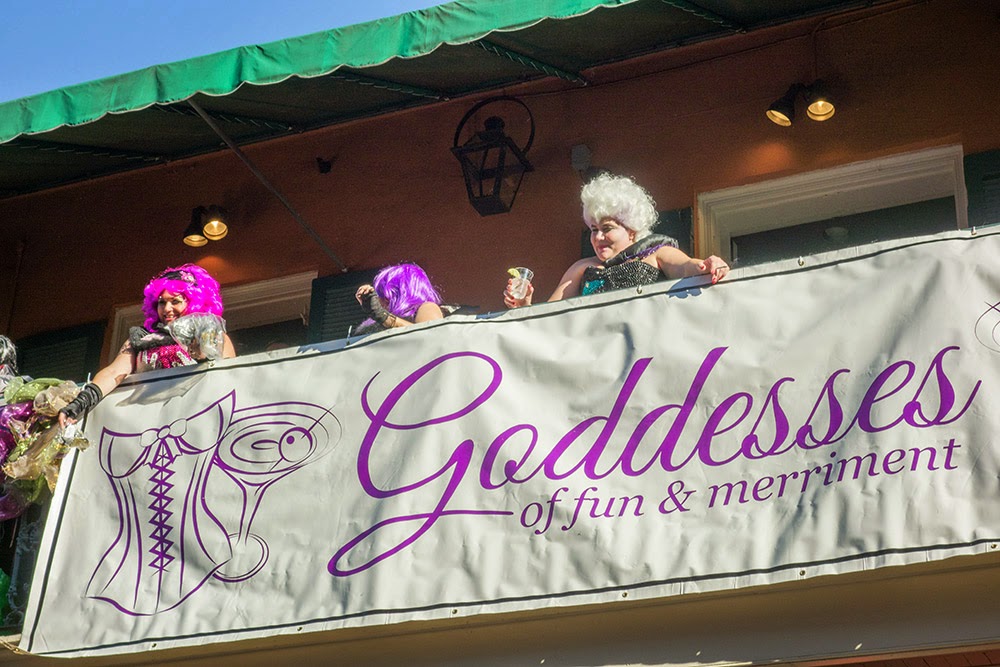 Brightly colored wigs were quite popular. These ladies were tossing beaded bras in addition to beads. 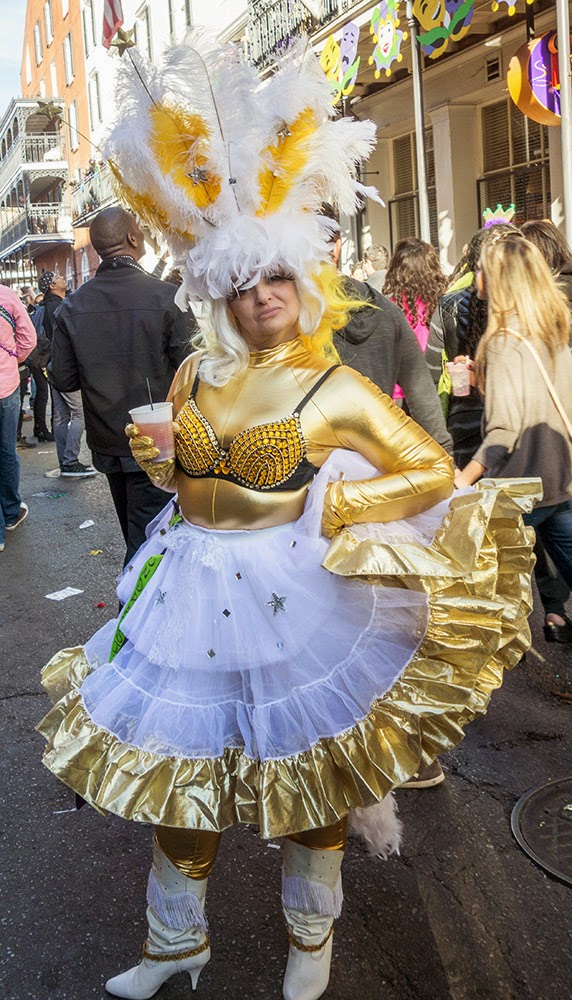 Many of the locals were in costume. 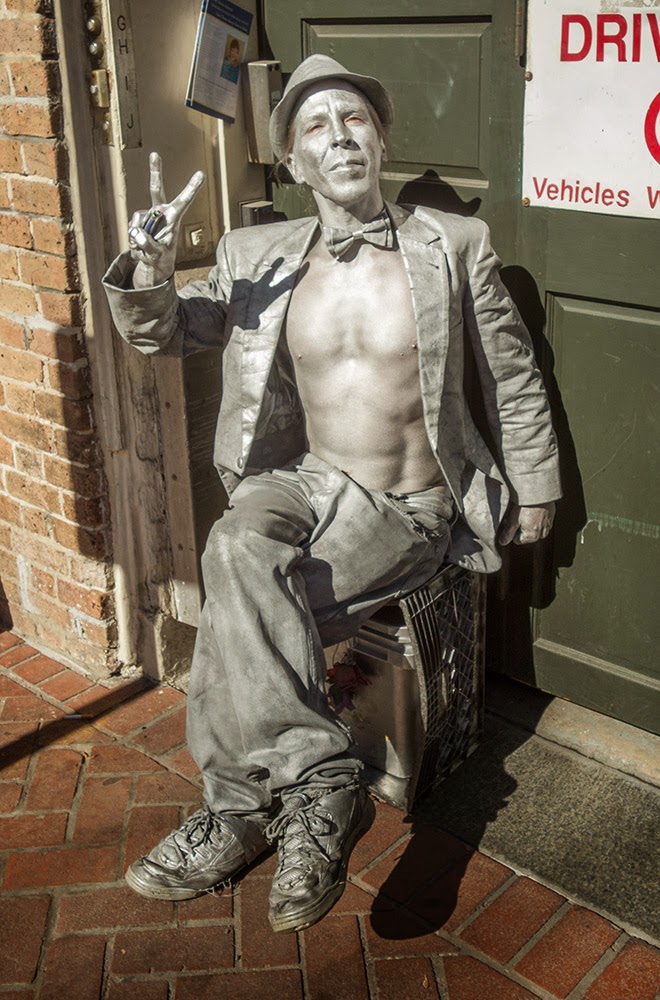 I've seen guys just like this one on the wharf in San Francisco. He looks like a statue until he moves!

This was a real statue, one of several famous jazz players in the little courtyard where we had a candy snack.

You may notice I have my purse snugly under my jacket. With so many people around I try to avoid being a victim. Life is more fun that way. When we were at the parade, I think I discouraged a pickpocket that was moving in on Craig. It was just a feeling, the way he looked, and the way he quickly moved away when he saw I was closely watching as he moved towards Craig's wallet pocket. I am not paranoid, just careful.

I was also careful when a man handed me an open can of beer that was fizzing in a strange way. Although Craig was with me, he was not obvious because he was still inside the shop we had just stopped to look at. Was the beer drugged? Did this guy expect to mug an old lady who was alone? Who knows, I smiled, walked on and got rid of it at the next doorway. If I was younger I would think date rape drug, but at my age I thought purse snatcher.

By the end of the afternoon we had walked up and down Bourbon Street and mingled with the crowds enough, and didn't really feel like staying for another parade.

As we drove back over Lake Pontchartrain, the sun was setting. The clouds were a delightful pastel pink in the baby blue sky. The water was a lavender color that was a mixed reflection of the sunset colors. Quite beautiful.

I've been to New Orleans before and have been to the French Quarter at a less hectic time. I'm glad to see that life goes on and that Hurricane Katrina did not end the tradition. We didn't seek out any areas of the city that had been damaged, but we did get a glimpse down a few streets and housing complexes that were still boarded up. We also saw areas that were being rebuilt.