Things did not work out as we had planned for our brief stay at Manatee Springs.

After we got settled in our space on Monday afternoon, we took a walk over to the Springs area of the park. It was not far and a trail led from the campground right there.

Even though it was only about fifty miles north of Silver Springs it was quite a bit colder. I guess the edge of the cold storm front that was pummeling the Northeast was affecting the area. There were very few people at the springs area and the concession and boat rental counter was closed. 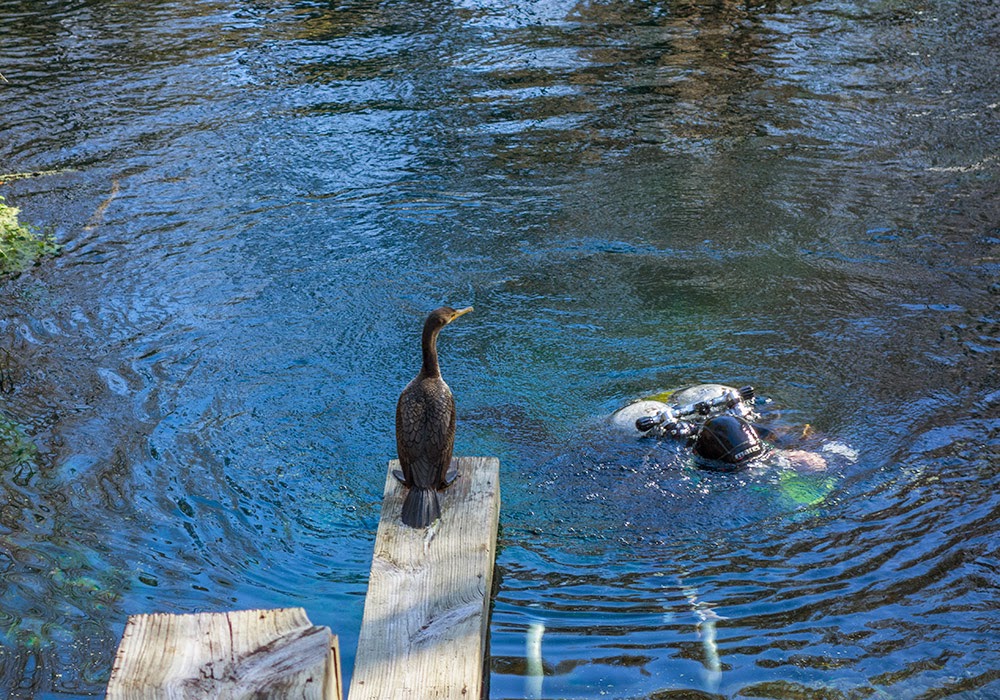 We noticed this bird on a dock at the edge of the springs. We also noticed what looked like an upwelling of water, and Craig thought it was the action of a spring, but then two divers emerged. It was a surprise!

It seemed to me the water was not as clear and shallow as it was at Silver Springs. In fact it looked black except for a few places where the springs were pumping out a steady flow of fresh water.

The channel the water takes from the spring to the river is called its "run". 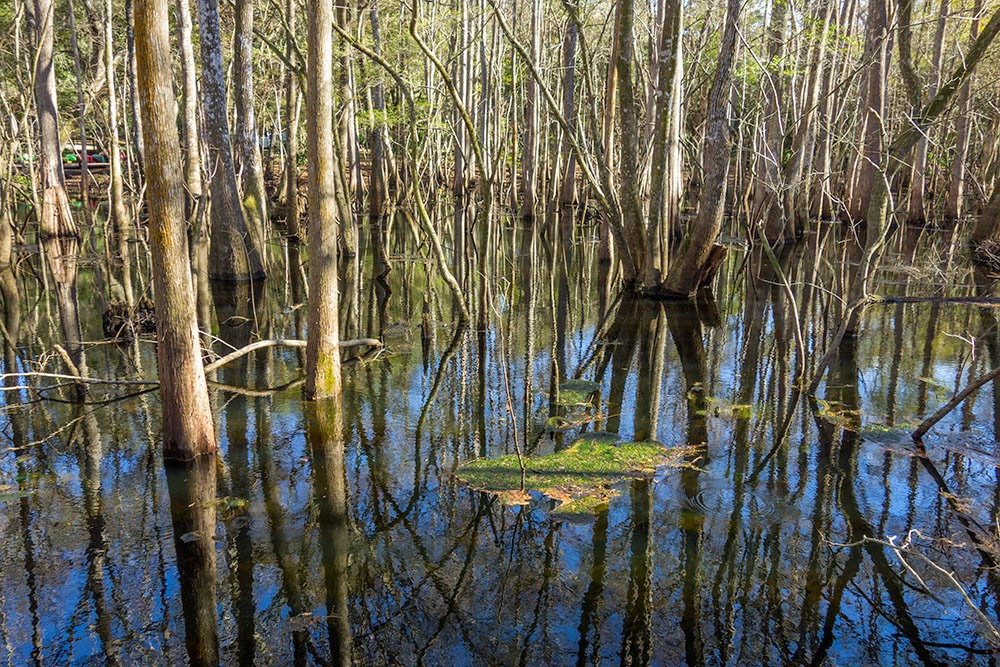 There was a nice boardwalk that paralleled the run with trees standing in the water on one side, and a view of the run on the other.

The water looked very dark, almost opaque.  It also looked like there was a bit of current running. I was surprised at how short it was, and how quickly it reached the Suwannee River. The river itself was also very dark, and I decided I did not want to try canoeing there. When we canoed at Wekiwa we stayed in the run and it was quite long and had almost no current.

Craig may have been a little disappointed, but accepted my reluctance.  We will canoe again, just not here.


When we were standing at the lookout platform at the end of the boardwalk, we noticed hundreds of vultures in the sky. 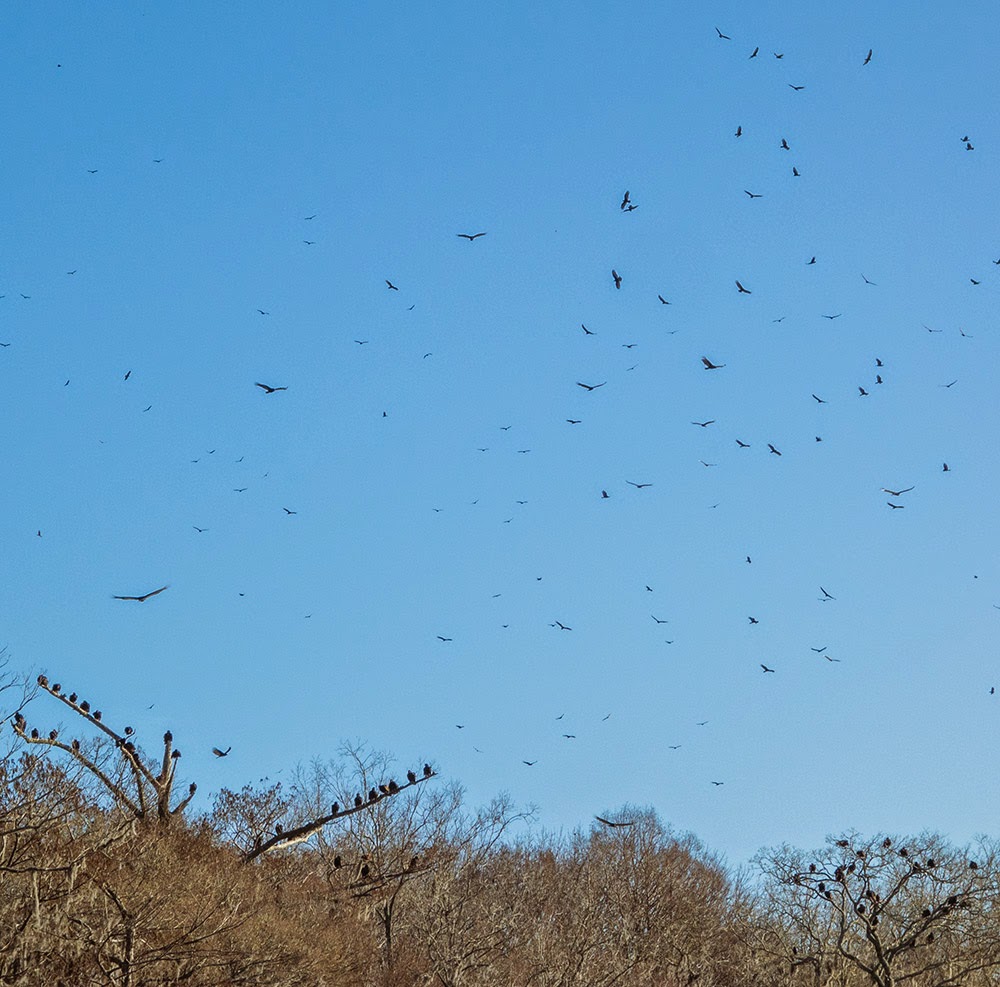 They were also roosting in the trees along the river's edge.

Waiting for a canoe to tip over?

On Tuesday we decided to take our trip down to Weeki Wachee Springs to see the mermaid show. But we didn't quite make it.

A few days before we had the tires rotated on the Jeep at a dealership in Orlando. As we drove toward Weeki Wachee we began hearing a road noise. It kept getting louder and Craig pulled up to a Tire King store in Crystal River. All four tires looked good.

While we were waiting for a Craig checked his phone and discovered there was a Jeep dealership a few miles away so we went there instead.

We drove there with the noise getting worse by the block!

The dealership mechanic said we were lucky to have made it, because the wheel was about to fall off.  It seems the guy who rotated the tires did not tighten the lug nuts on one tire, and thus the problem.

We felt lucky we had not had an accident, and the fix was an easy one.  It did cost over $200, but I talked with the Orlando dealership service manager, and expect a full reimbursement check ASAP!

By the time we were back on the road it was too late to get to a show and we returned to the campground.

On Wednesday, we took another stab at it. This time we had a nice drive, but as we pulled into the Mermaid Show's parking area there were people coming out and leaving. We were told there was some sort of "technical problem" so the shows had been canceled for the day.

We did have a really great lunch though at a funny little roadside
place called Becky Jacks. I had a fantastic fish sandwich, and Craig had some fish tacos. The portions were so large that we skipped dinner that evening because we were both still full.

We have often found very interesting food by using Google on our Android phone. Technology makes travel so much easier than it was years ago.

If we were on vacation, these things might have seemed to spoil our time, but I think as I remember these days I will feel the luck in not losing a wheel and the pleasure of finding a great meal in a crazy little place.

Life is good. Enjoy what you can.