[From Craig] On Wednesday May 13, Merikay and I hiked what a Ranger told us is Bryce Canyon's most popular trail. It went down and then up again, starting and ending at the Sunset view site. Merikay asked me to tell the story, which is accompanied by pretty large images. This post is not recommended for readers who are currently on low-bandwidth Internet links.

From the Sunset parking area we walked along the rim to the Sunrise site, from which we started down. Neither Merikay nor I can figure out the Sunrise and Sunset designations, never having been in the Park at either time.

There are many images on the Internet from the Sunrise site. This one is from a short way down the trail: 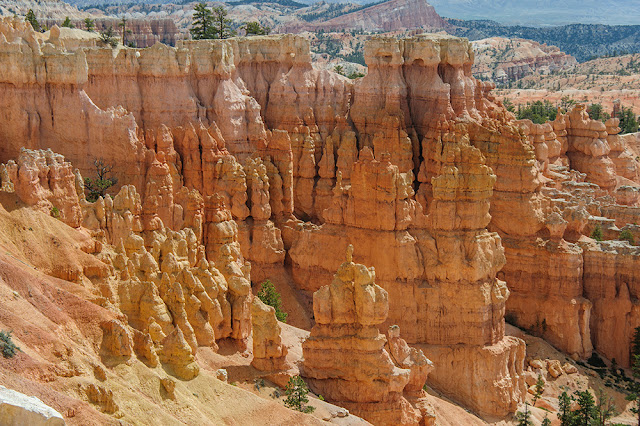 A few turns down the trail came a great view of an array of hoodoos (formations) that I think of as The Castle because of its apparently rectangular arrangement: Down and down we went, each of us thinking of how we were going to have to pay for this nice downhill stretch. The next image goes Tolkien's Lord of the Rings one better: Three Towers. 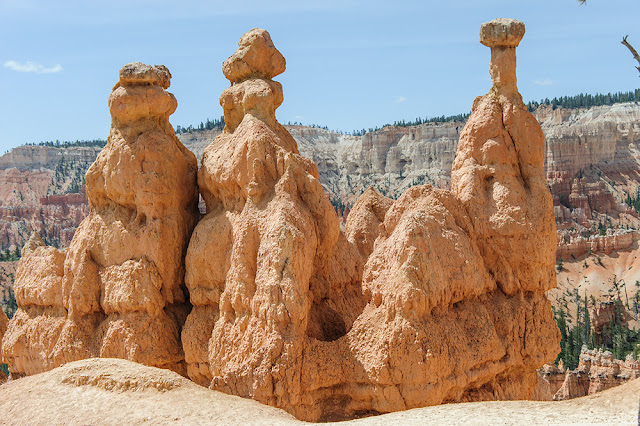 A few turns more down the trail, we saw another three striking formations. From this you can see that we're starting to turn right, along the recommended "clockwise" route around the loop: 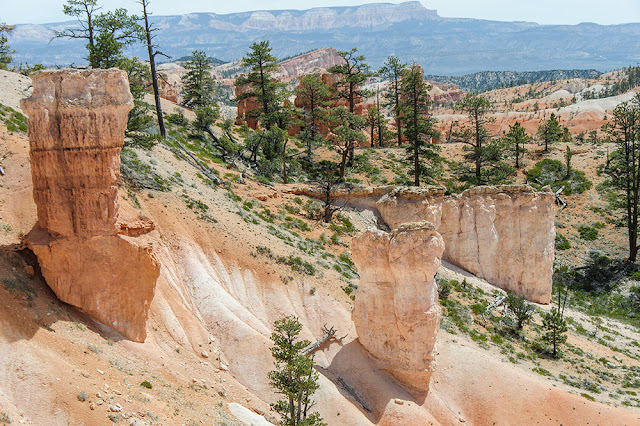 The next image has almost nothing to do with the rest of this post, but we swear it is from the hike! It reminds both Merikay and I of an abstract work by Salvador Dali, and needs only a saggy clock draped over one of the trees to complete the Surrealist motif.  :-) 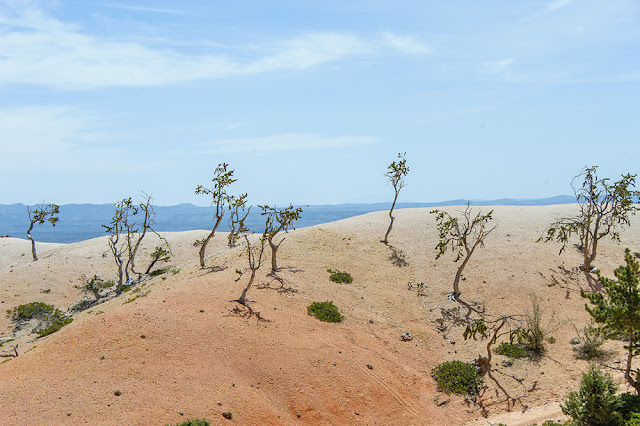 As we neared the bottom of the loop, we came to an area called Queens Garden. Probably the name comes from the ring of features around the top of the tower, which resemble the top of a chess queen: 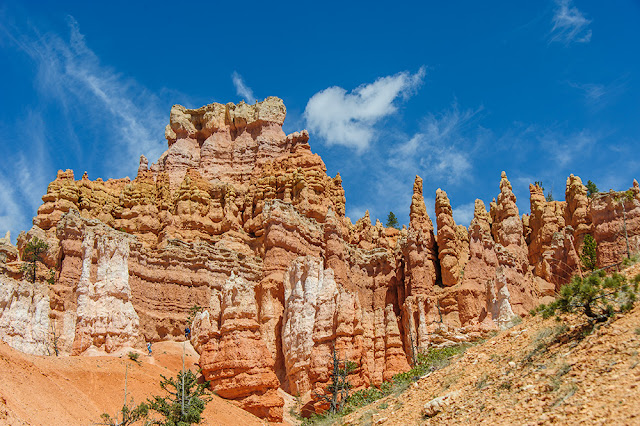 When the trail turned seriously upward with a long set of switchbacks, we both had to stop very often to catch our breath: 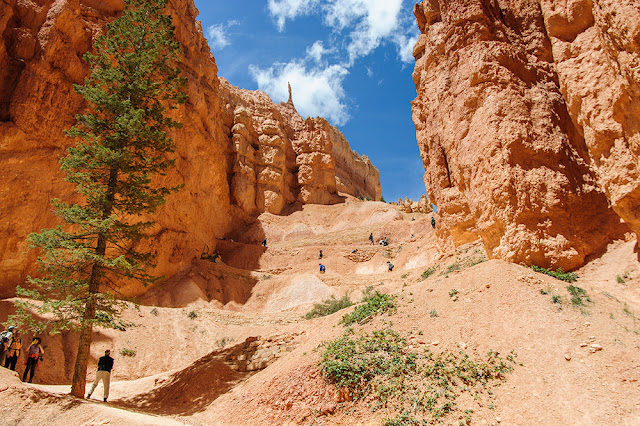 Our uphill climb passed a crew that was improving the trail for future visitors. Here Merikay looks forward to the rest of the climb, next to one of their powered devices: 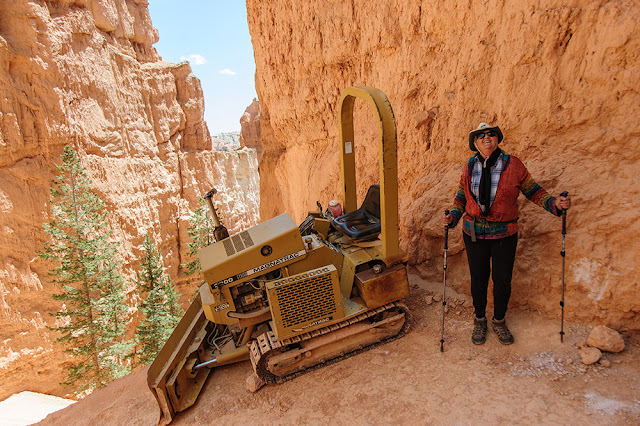 This series of switchbacks gives climbers the impression that they will be "at the top" when they complete them. It's not true: quite a few longer switchbacks meander up the slope thereafter. They look out over some wonderful new views, like this one: 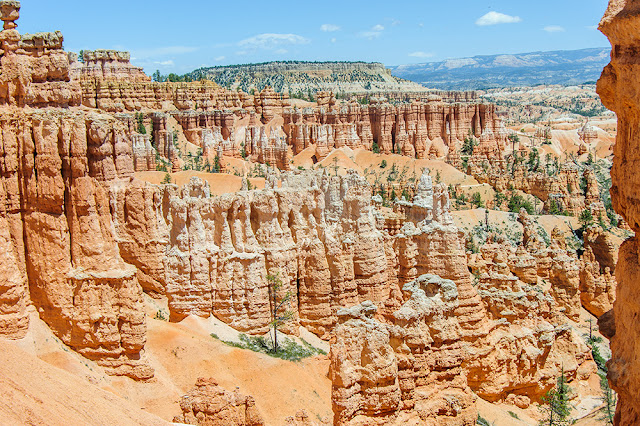 This formation is close to the trail, and looks almost edible! 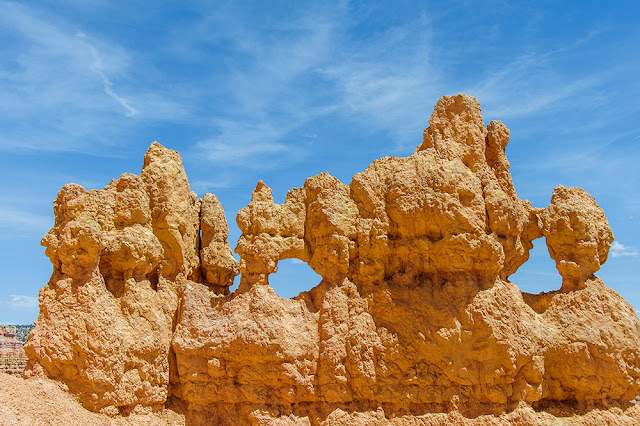 Just before we reached the top was another of these amazing "from the rim" images: 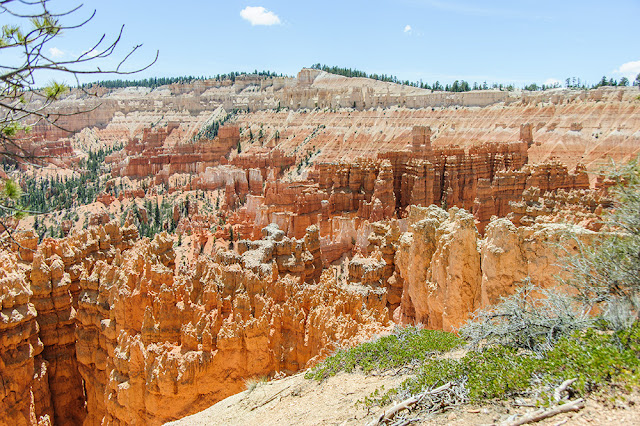 The trail is about 3 miles long with about 600 feet of down and up. We finished it with enough time left in the day for a driving tour of the south end of the park. Merikay may write a future post about that... enough for now!