First the bust: sometimes the world doesn't cooperate with my time table.  I had it all planned. We would drive down to see the North Rim of the Grand Canyon from our RV spot in Page AZ.  A nice day trip! But, the world isn't cooperating, in that the road to the North Rim is still closed. That part of the park will not open until May 15th.  Oh well, a good reason to come back another time.

However, Thursday I checked off a big one on my must-see bucket list. About 25 years ago, Craig bought a beautiful, large format photo of a river winding around a huge stone formation: a U-shaped bend in the river. Eventually I learned it was a place called Horseshoe Bend. But I had never really researched exactly where it was. When the picture hung in our home in California, I would sometimes look at it and promise myself that someday I would go there. It may have been one of the items that helped stir my desire to RV full-time.

Well, as we drove into Page from Flagstaff on Wednesday, I saw a brown sign along US 89 indicating that a turn-off for Horseshoe Bend Overlook was ahead. Could it really be the same place?

That evening I Googled it, and yes it was. It is located only a few miles south of Page. Going there became our Thursday afternoon expedition.

The turn-off went to a large parking area just off the highway. The path to the overlook was 3/4 mile and consisted of a relatively short, steep uphill climb, followed by a long, not-too-steep downhill walk. But as we were going down, I reminded myself that we would have to climb back up it again!

If you look carefully you can see some people on the path to the overlook (on the lower right). They give a sense of how big the canyon is. You can't see the river until you get to the rim.

Although there were a lot of people there, I wouldn't say it was overcrowded. My friend Al would probably not agree. There were times when I had wait a few minutes for someone to move out of the picture I was going to take, or wait to climb onto a rock that offered a bit better vantage point, but in general the people were all nice and everyone seemed quite respectful of the place and of each other. In fact we rather enjoyed chatting with several people, sharing stories and appreciating our mutual luck to be there on such a fine day. 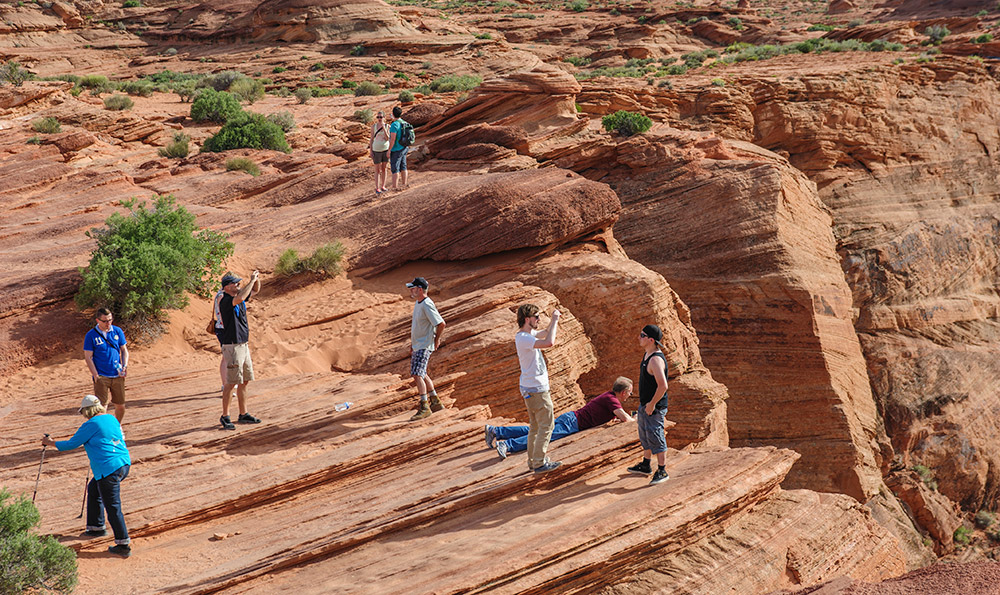 Once you arrived at the rim there really wasn't much to do except look, people watch, and take picture after picture of this amazing place. We did walk along the rim for a ways, but mostly stayed where most of the people were.

Another nice thing was the frequency with which people offered to take pictures of each other, using the subject's camera.
[From Craig] In the case of the two images below, there was the added factor that a pretty young female tends to make men really helpful :-) 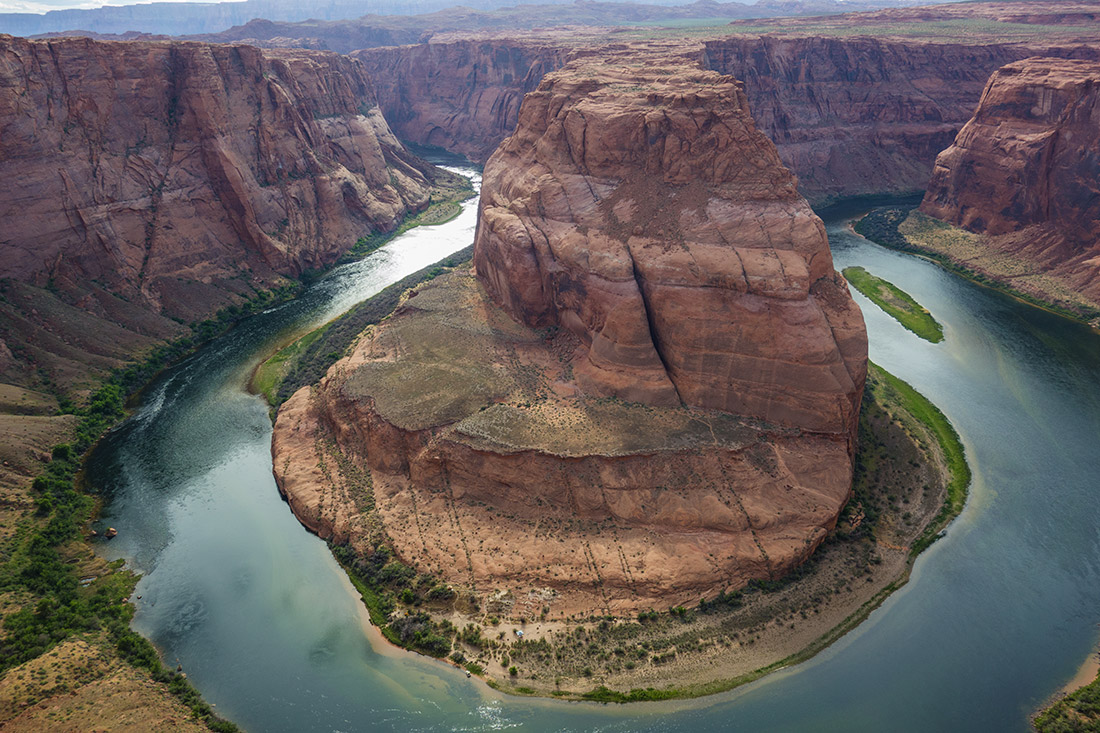 We each took many pictures, using both of our cameras. This was the closest either of us came to getting the full width of the river and the top of the rock formation. 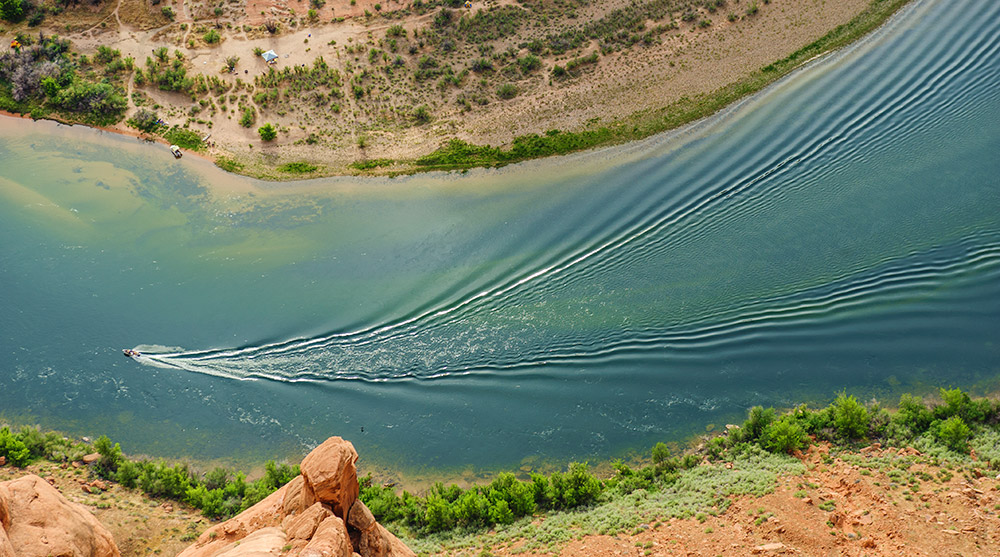 At one point during the afternoon we spotted a boat coming around the bend. In this zoomed-in image you can also see a tiny boat mored at the shore and part of a campsite canopy tent.

It is so hard to limit the number of images I include in a post about a place like this. My main criteria for inclusion is that the picture should help tell the story. But here are a few more that are just "special". 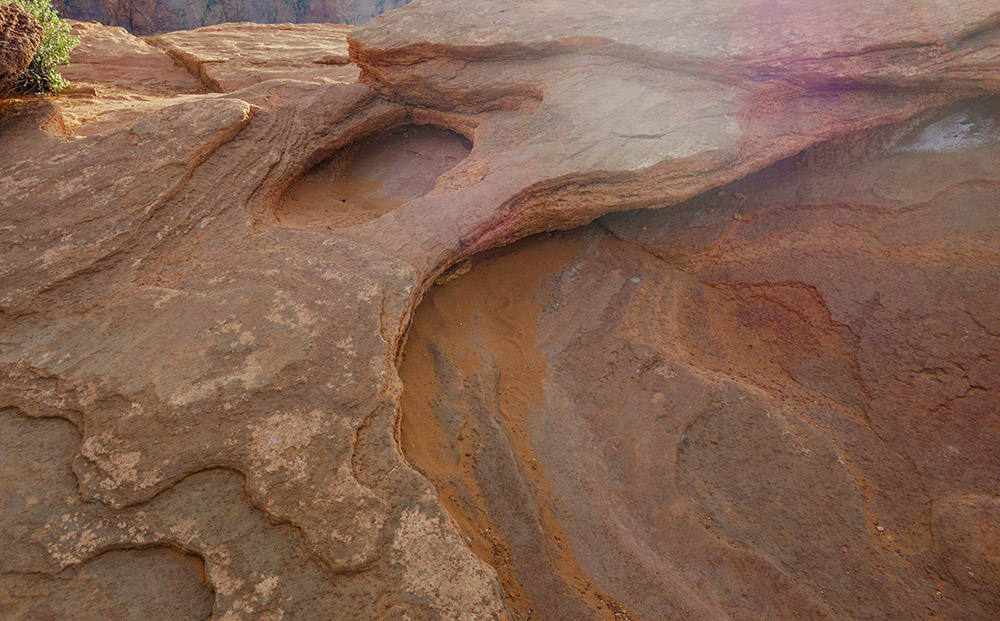 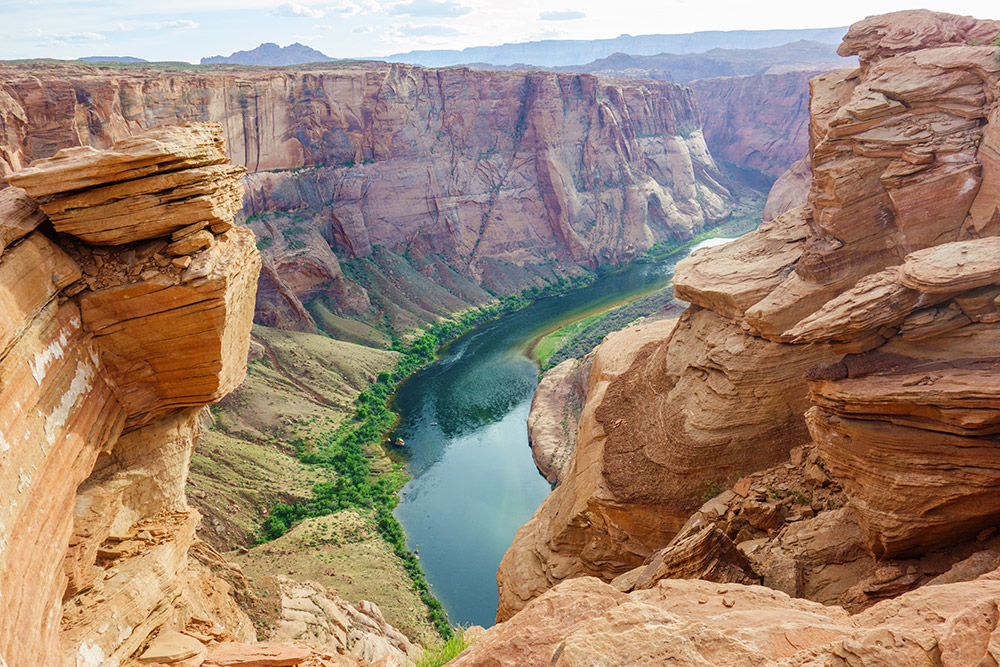