Another week of small adventures in Alaska

It is time for a catch-up post. We have stayed at four different RV parks, each for a few days, and did a few "tourist" things. But we mostly just relaxed and enjoyed our life in the Alfa. 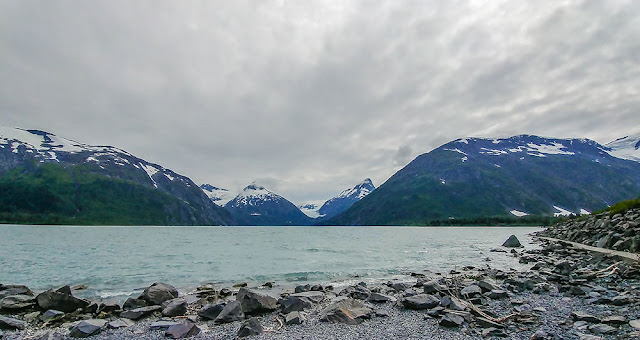 After leaving Cooper's Landing we drove about 50 miles to the Portage Valley RV Park, which is a few miles north of Whittier. While there we drove over to the Visitor Center, which is on the edge of the Portage Glacier Lake. We spoke with one older woman  who remembered the glacier coming all the way to where the shore is now, rather than the lake. 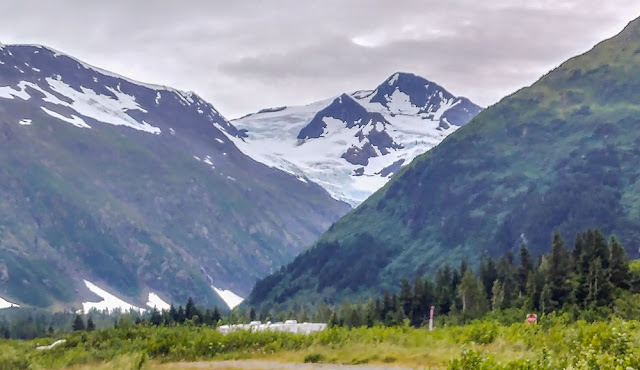 This zoomed-in image shows the glacier on the far mountainside. 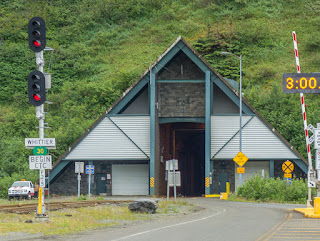 Whittier is now a ferry port and a commercial cargo port. In  gold rush days, prospectors would pack over the glacier and mountain. In 1941 a two-and-a-half mile tunnel was blasted through the mountain for the railroad. This was to provide a main supply route for the WWII war effort.  In 1998, the tracks in the tunnel were converted to accommodate both train and vehicle traffic. It is one lane wide, and trains and vehicles take turns going through in alternating directions. The toll for a car is $13. 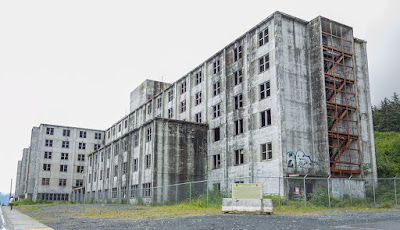 The day we went to Whittier was rainy and overcast. As we drove into town, we couldn't help noticing this depressing building and wondered what it was.

At the small but interesting Whittier Museum, we learned it was an abandoned military housing building from the Cold War era.

Speaking of that museum, which was just a few rooms on the lower level of the Whittier Hotel, it taught me a great deal about the Japanese occupation of the Aleutian Islands of Attu and Kiska. Being there, and reading the stories of individual soldiers, was quite thought provoking to say the least. The Japanese did indeed invade America.

Our next stop, 56 miles north, was back in Anchorage. 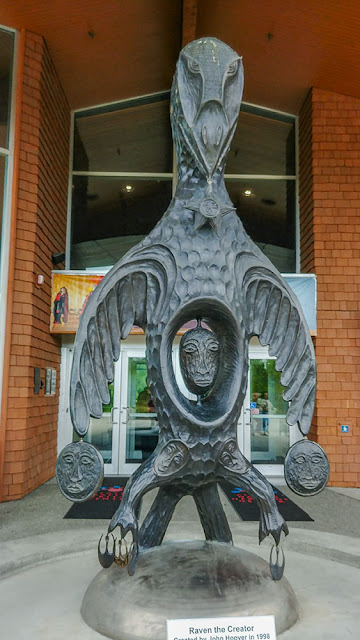 When we were there in June, we missed going to the Alaska Native Heritage Center.

The Center did not disappoint us. We were able to meet members of Alaska's eleven different native cultural groups, and learned about their geographic and language diversity. 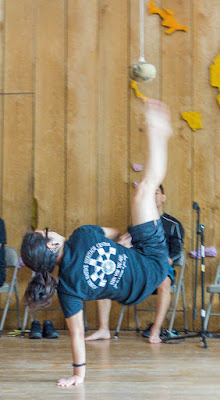 Inside the center we watched a demonstration of "Eskimo Games" given by three teenagers. The games are physical challenges that were done by the hunters to stay in shape. Quite different from anything we had seen before.

One of the games is to balance on one hand and kick a ball hung overhead. The winner being the one who could kick the highest ball.

We also listened to a native speaker who gave a presentation about the eleven cultures, and watched a couple of short movies.

Outside there is a lovely pond, and around it there are examples of homes and community buildings from different cultures. 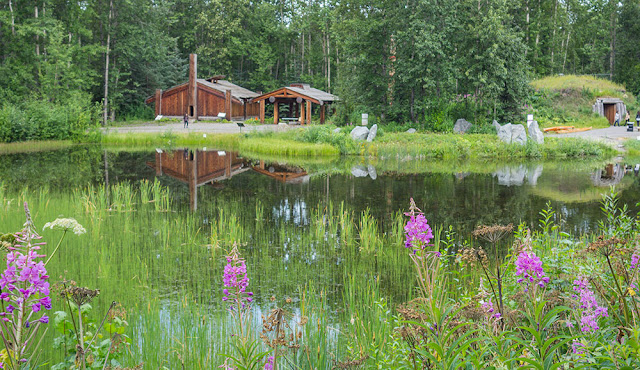 There was a young native person inside each structure who showed us some of the artifacts, described their use and answered any questions we had. 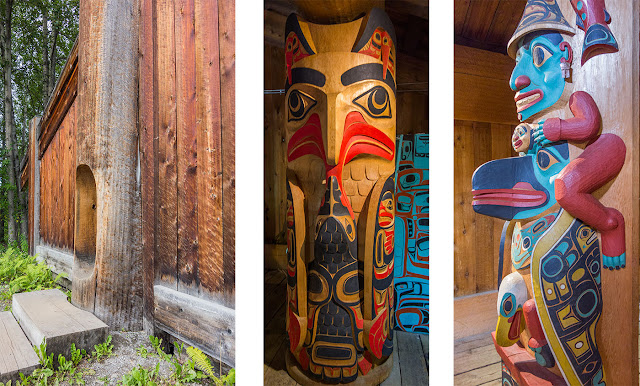 Above is an entry door, and two supporting pillars that were carved with clan symbols. The center one illustrated communication between the eagle clan and the raven clan.

On Tuesday we challenged ourselves with a drive of 38 miles to Wasilla.  Does "Wasilla" sound familiar?  It's the home of Sarah Palin.

There were two things I wanted to see in Wasilla. The first was the Iditarod Trail Race Headquarters. 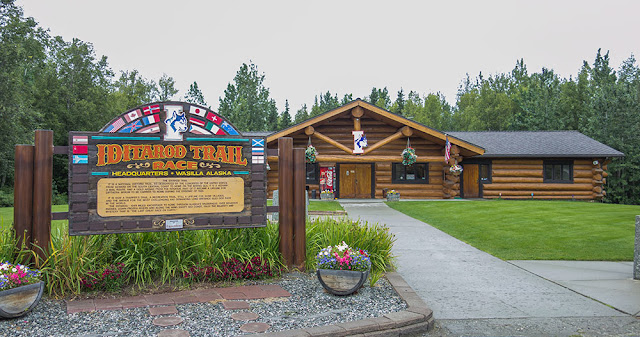 Inside the log building they had a nice gift shop, and a "museum" room. We watched a good movie about the sled dogs and the race.

Outside they had puppies.

We were able to pet them. This guy had had so much attention he just fell asleep in this lady's arms. He had an unusual ridge of white hairs on his back. It looked somewhat like a mane or a mohawk haircut. 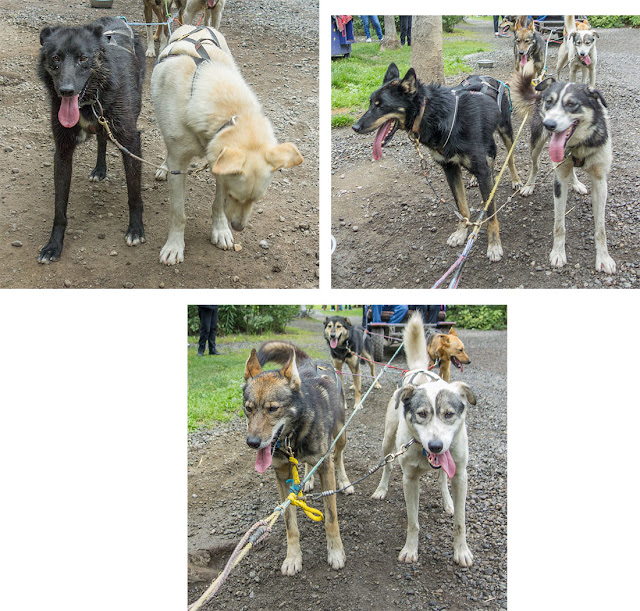 We also took a short ride in a wheeled cart pulled by a team of eight dogs. As you can see from the pictures above, each dog is different. These are not Siberian Huskies. Alaskan sled dogs are an unrecognized breed that has combined many different breeds. They were all about the same size, with very long legs and a built-in desire to RUN. 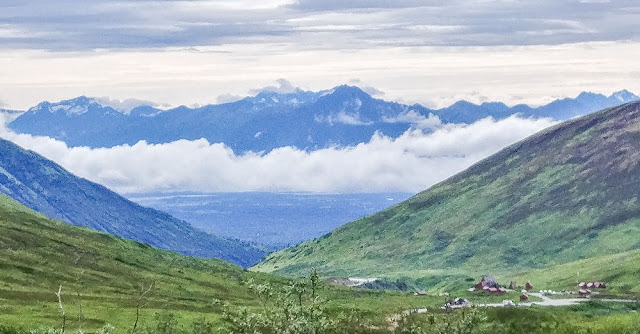 Our second Wasilla excursion was up to the Independence Mine State Historic Park.

Have I mentioned the beautiful scenery we see everywhere? On this day the clouds were below the mountain tops and above the valley. 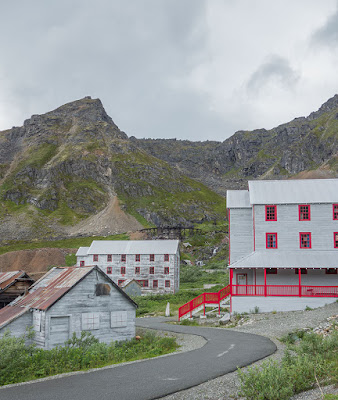 Beyond the first strikes in which large nuggets are picked up easily from the gravel, the real riches were to be made in "hard rock" mining, done by mining companies employing hundreds of men.

The Independence was one of these. It opened in 1906 and operated until 1943, when it was shut down as a nonessential business by the War Production Board. It was reopened in 1946,  but closed again in 1951. It was used as a ski resort for a while, and finally was donated to the State Park system. 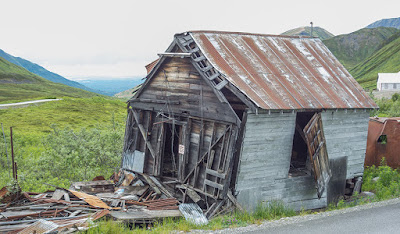 Some of the buildings have been maintained and partially restored. 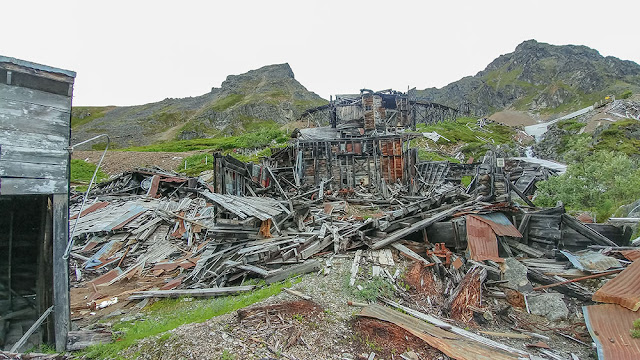 Some of the structures are unrecognizable piles of collapsed wood and metal. 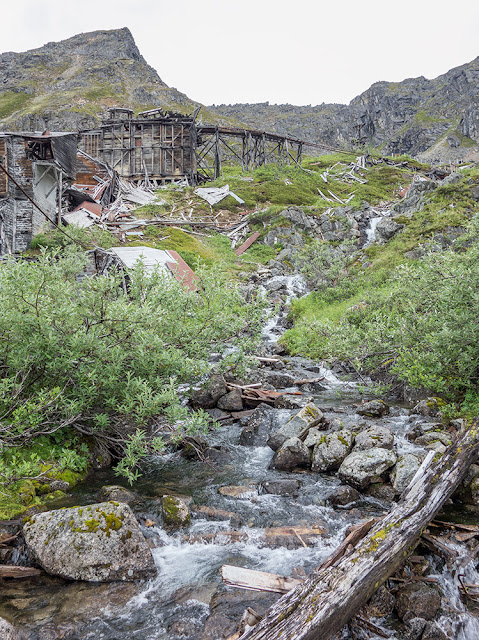 The small stream that did much of the mining work is still coming down the same course, ready to do more if the price of gold should rise high enough. 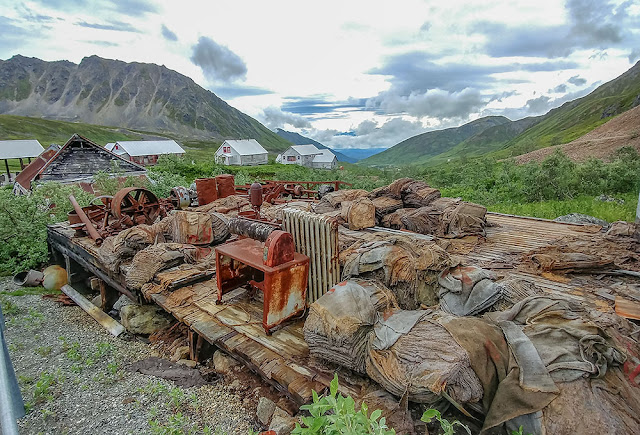 The above image is of piles of 70-year-old burlap, plus an odd assortment of rusted machine parts. I wonder how many more years they will remain recognizable. 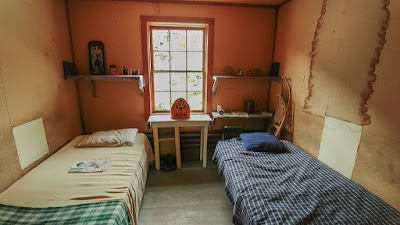 A job at the Independence Mine was a good job. The pay was good for the time, and the men were well treated. Good food and good housing conditions resulted in a less than 5% turnover.  Among their luxuries were hot water, indoor plumbing and electricity. 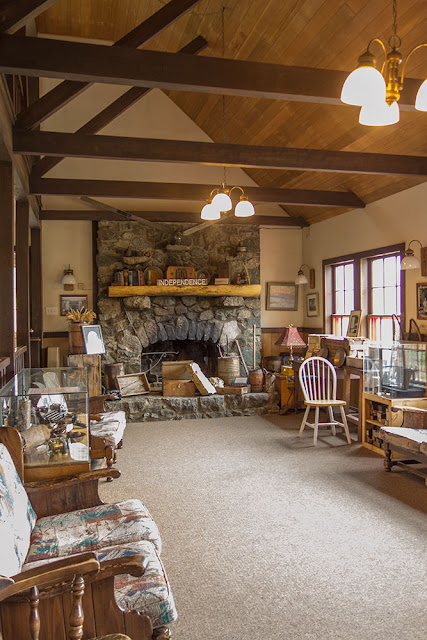 We enjoyed a walking tour given by one of the Park Rangers. We were able to go inside some of the buildings and from her descriptions learned more than we could have on our own.

This was the main room of the manager's home and office.


The day was not warm, but we still stopped on our way back to Wasilla to take a look at the raging Little Susitna River. Pretty cool! 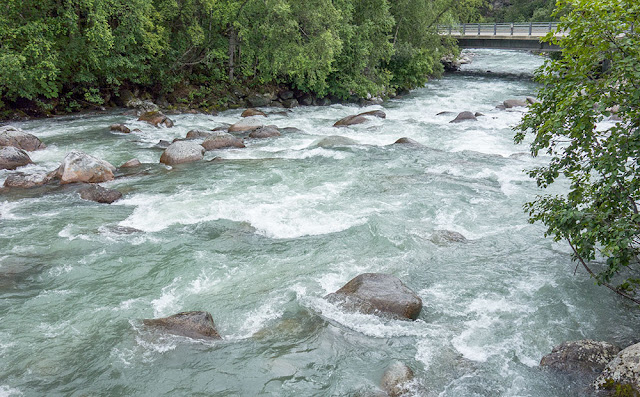 We are now in Talkeetna, 76 miles further along our route. We plan to be here for a week and have a couple of BIG adventures scheduled!

Next Wednesday will be the high point of our Alaskan trip, and it won't be in a museum! Check back for the story!