Heat Wave and an departure "OOPs"

I'm afraid the current heatwave has done in our summer walking plans for a while.

We left Redding CA very early to make our drive north to Valley of the Rogue state park, located between Medford and Grant's Pass Oregon. Luckly the tempertures at the park were a bit cooler.

We did have one small OOPS on our way. Apparently, I did not close and lock the power bay door correctly. 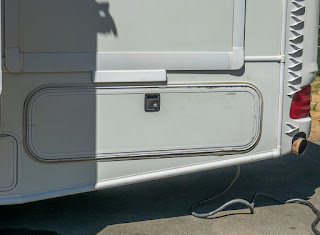 It popped open and the lower edge dragged (a little) on the road.

We did wonder why those three nice big rig drivers honked and waved at us as they passed us on I-5. They were not just trying to express a friendly "Hi".

We were actually very lucky the whole door did not tear off and cause a road hazard for someone else!

I didn't take any pictures while it was in the broken stage, but basically the edge was roughly burred and slightly bent, the hinge on the aft side was broken, and the door would not close.

Craig used his sander to smooth the burrs, and we were fortunate to find an RV Mobile service that was willing to come to the park that afternoon. The guys from Granger Mobile RV service from Gold Hill OR managed to get it all straightened out in a short time. They had the right tools and know-how. We felt the $85 service charge was well worth it since we didn't have the tools along to do it ourselves. Craig will touch up the scuff marks with a bit of paint. 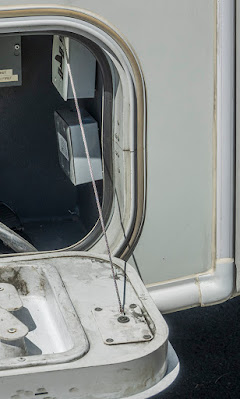 There used to be two cables that held the door parallel to the ground when open. Both broke shortly after we bought the Alfa.  Since it was easier to access the power cord and water filter with the door open all the way to the ground, they were never replaced.  They were yesterday, and we will now be able to see the bay door if such a thing happens again.

I have to say I really appreciate the fact that when I do something stupid like not closing the door properly, Craig does not give me a bad time. I felt bad enough by myself.

Just another bump in the road!

[From Craig] Actually I-5 was quite smooth.  If there had been bumps, the door would probably be laying along the road.