So, what do you do if you are RVing in a historic heat wave?  The answer is, frankly, not much. We gave up going for walks when the temperatures were just in the high 90°s. We have changed our average departure time from around 9:00 am, to as early as 6:30 am. A few days ago Craig got up before dawn so he could wash the windshield before it started to bake. 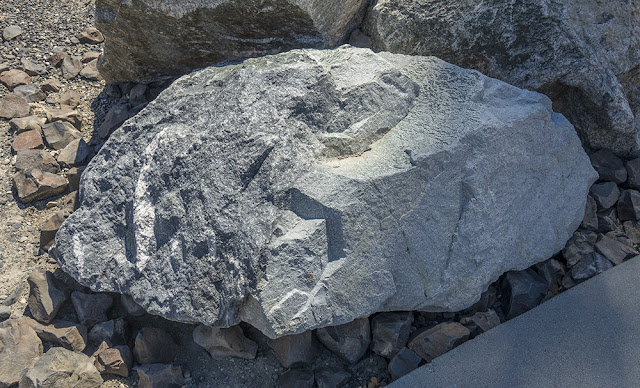 Basically we have been about as active as a rock!

We spent three nights in Cashmere WA, but did not go out except for a quick run to pick up some takeout BBQ. We kept the mini blinds closed, a large box fan blowing and the coach AC running. Netflix, TV and our mutual love of reading kept us occupied.

We have continued our usual after-dinner game of gin rummy.

The dash air of the Alfa has not worked for a couple of years. We got it "fixed" but the fix didn't do much, so as we drive in this hot weather we have been running the generator so that we can run the coach AC. It works to keep things tolerable, but we still have felt the urgent need to drive as many miles as early as possible. I know many RVers get up before dawn and get going. I have seen them leave the parks. This has not been our style, and we look forward to returning to more leisurely departures in the future. 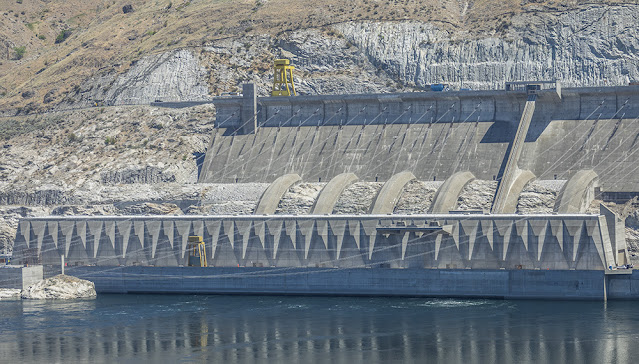 We arrived in Grand Coulee, not far from the dam, early on Monday.

On the first night we went to the dam to see the laser light show at 10 PM. By this time the temperature had gone down to the high nineties, but although it was after dark, we noticed the cement benches were quite warm from the day's heat. 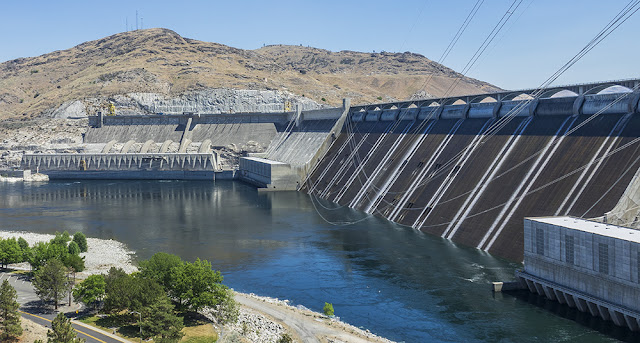 For the show they open the flood gates on the spillway (dark gray section on the right of the above picture) and project an animated "stick people" story on the white water pouring down.

On Tuesday we went to the Visitor Center. 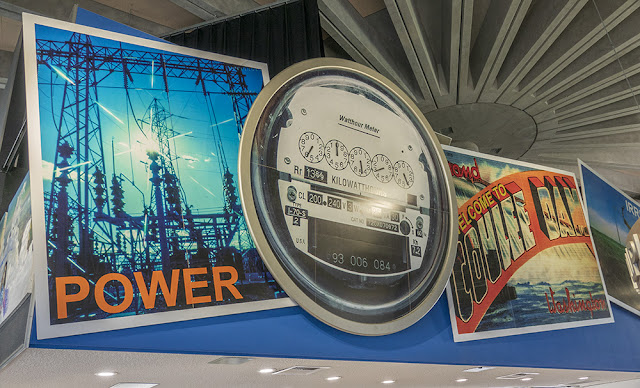 We knew it would be air conditioned. We learned a little more about the Grand Coulee Dam and the forward-thinking President Franklin Roosevelt. His fearless leadership was such a big factor in our country's recovery from the Great Depression. It makes me wonder if we as a country can come together and deal with the challenges of climate change. We have come so far, it would be a shame if we allow the minority in the Senate to prevent the much-needed work to be done. While I'm skeptical that man can actually change the course of climate change, I feel we must make major changes to improve our chances of dealing with it. More clean energy is needed, sooner rather than later. We will need more power for air conditioning in summer and more power for heating in winter.
Speaking of climate change, on Wednesday we took a 30 mile Jeep drive south to see an area called the Dry Falls. 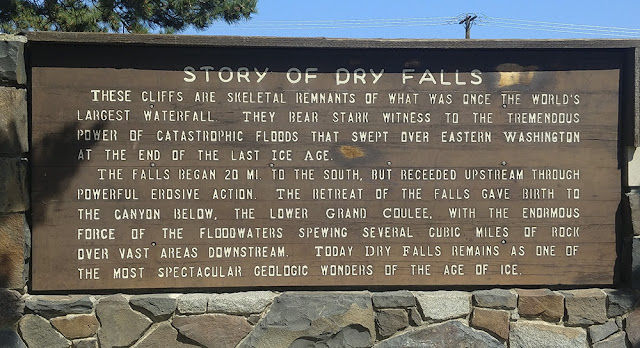 At the end of the last Ice Age the melting glaciers resulted in huge lakes. The coulees are the result of when they broke and caused massive floods.

The waters crashed over long falls that were bigger than Niagara. 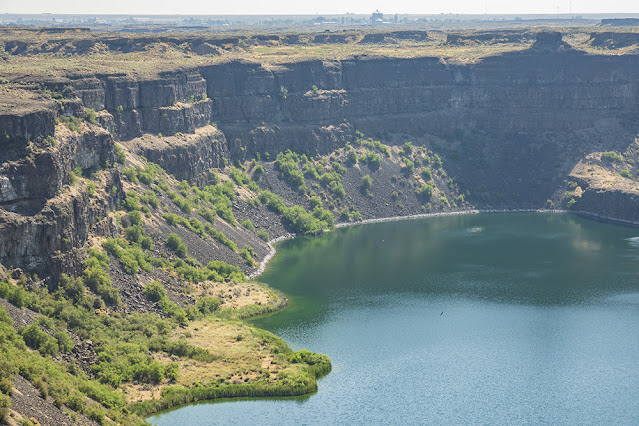 These massive basalt cliffs are what remains. 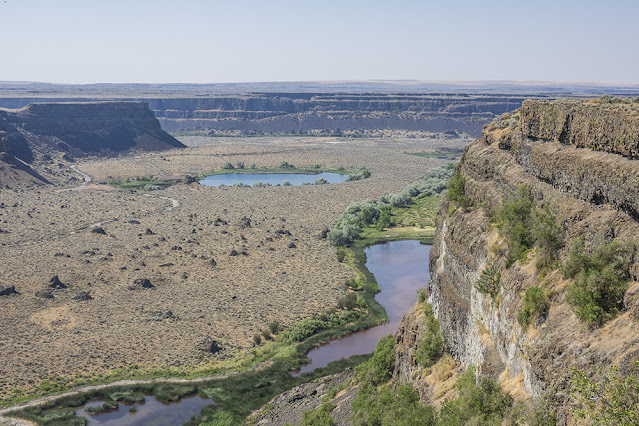 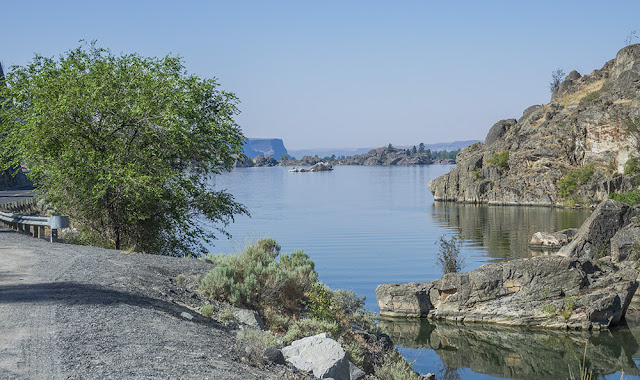 On our way there and back we drove along Banks Lake. The water was very still and we only saw one boat in a half hour.

One remarkable sight along the way was of Steamboat Rock. It was carved by the same flood waters and is 800 feet tall and covers 600 acres. In many ways the area reminded me of the carved cliffs of southern Utah, except the rocks are brown and black instead of rusty red.

When we visit areas like this I am in awe of the power of natural forces. This happened millions of years ago. Reminding me that our time on earth is so brief. And yet when I visit the dam, I am also amazed at the power of man to use natural resources.

We have been so lucky these last six years to have been able to see so many places. Even short outings like this drive will remain in our memories. Blogging helps!

Our next stop is at McGregor Lake, about sixty five miles west of Glacier National Park. We have checked the weather forecast and are happy to see it is a bit cooler there. Only in the 90°s!