Last spring when we were at an RV show we saw a Georgetown Gas Class A that had a kitchen island.  I liked the idea of having so much counter space because I do cook from scratch a lot and have enjoyed my large home kitchen for years.  But ... We probably don't want a Georgetown.


Over the months I have been thinking about how we could achieve the same space.  We did notice that many of the larger Class A's had a decent amount of floor space in the "kitchen" when the slides were open.   Hmmm!

Yesterday when I was at Whole Foods I noticed a gal folding up her demo table.  It was not too wide, and had extended legs that made it about 3' tall.  I asked her if she knew where it had come from, and since it was her's she was able to tell me the source.

It was from Lifetime Products. In the picture it looks a bit flimsy, but her's seemed quite sound. I like the fact that it folds down into 24" x 24" x 3" and has a handle. 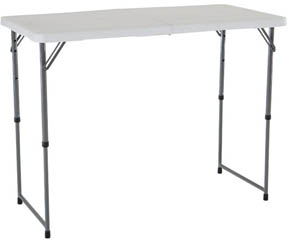 Maybe I could use it as a counter space while I was cooking and fold it up and stow it when not needed.

I could also see using it as a work table outside for my art.   I like to stand when I work, and have been thinking  about building a portable work table that wasn't to bulky and could be broken down for transport.

Actually I could use more than one!

BUT I'm trying not to buy anything until we actually HAVE an RV,

BUT I could use this at home now.  Maybe I'll order one next week ...
That way if it didn't seem like it would work, I could return it.

I think I'll order one now,   It's  tax deductible.