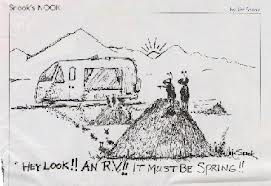 Life in Southern California is so hard that (most or all of) an anthill in Prado Regional Park decided to leave home in favor of our RV.

Since then we have relocated the whole rig to Bakersfield. 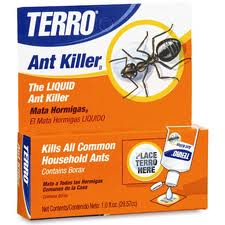 Along the way we picked up some Terro ant killer from Home Depot, and have set out several samples for their approval and consumption.

They really seem to like it. You put drops of it down on a piece of paper or cardboard and they gather around and suck it up. It doesn't kill them right away like a spray would.


The theory of this product is that the ants are supposed to take it home to their nest/anthill, where it will "do in" the whole family.

Since Chino is now more than a hundred miles away, it's going to be hard for them to follow the original theory. So we will have to see how it affects the little buggers.

We have used it very successfully at home when the late summer ants invade looking for water. It took a couple of days before we stopped seeing any stragglers.

Changing the subject, we're finished with our three days of maintenance work.  We got a second opinion on the brakes and were assured they were good.  But the same mechanic advised that we should replace the front tires.

They gave us a tire dealer recommendation and we spent Friday having a pair of Michelins put on, with a discount under the FMCA Advantage program.  We also had a full two-axle alignment, and had all four corners of the Alfa weighed.

Our ride is much better, but we still want to get new Koni shocks installed. Unfortunately they would have to be ordered and we didn't want to stay in Chino any longer!

We're spending the night at the Southland RV park in Bakersfield.  Our original plan was to try a night of boondocking at the Camping World, but since the temperatures have been over 100F we opted for a place with 50 amp service and a nice pool.  It was great to spend an hour relaxing in the water while I did the wash at the little clean laundry just steps away.  At $1.50 per load wash and 50 cents per load drying it was quite reasonable.

We are delighted that the Alfa's air conditioner works fairly well, and the refrigerator makes ice and keeps Craig's ice cream solid.

Have you ever had ants invade your RV?  What did you do about it?

I wrote the above post last night.  It is now early Sunday morning in Bakersfield.  There is a rooster crowing in the distance.

The ants are all gone!  Well, maybe I will find a few here and there, but the wall to wall swarm has been abated.
Posted by Merikay at 6:55 AM